July 20, 2014
Three posts is probably enough from a Flower Show in my view, so this is the final post relating to Hampton Court Flower Show and I should warn you, it does involve a bit of an epiphany.

It strikes me that when designing a show garden, something I know absolutely nothing about and I may just be proving by what I am saying, that you need to grab people's attention really quickly.  Most visitors are wandering around and talking with their companions and you need something that will make them stop and pause and look at what you have done.  Something has to catch their eye or they will just keep going maybe with a passing 'that's nice' as they go.  Building something huge in your garden will generally have some impact.  The Quiet Mark Treehouse with landscaping designed by David Domoney could hardly be missed.  I believe this garden is a 'feature' and not a show garden as such.  I was not at all confused by this.  It was an amazing structure and may I say some rather nice planting too.  Sadly I was not that keen on the car element, which is not because |I do not like cars but for some reason I rarely like to see them in the garden show context, it always jars. 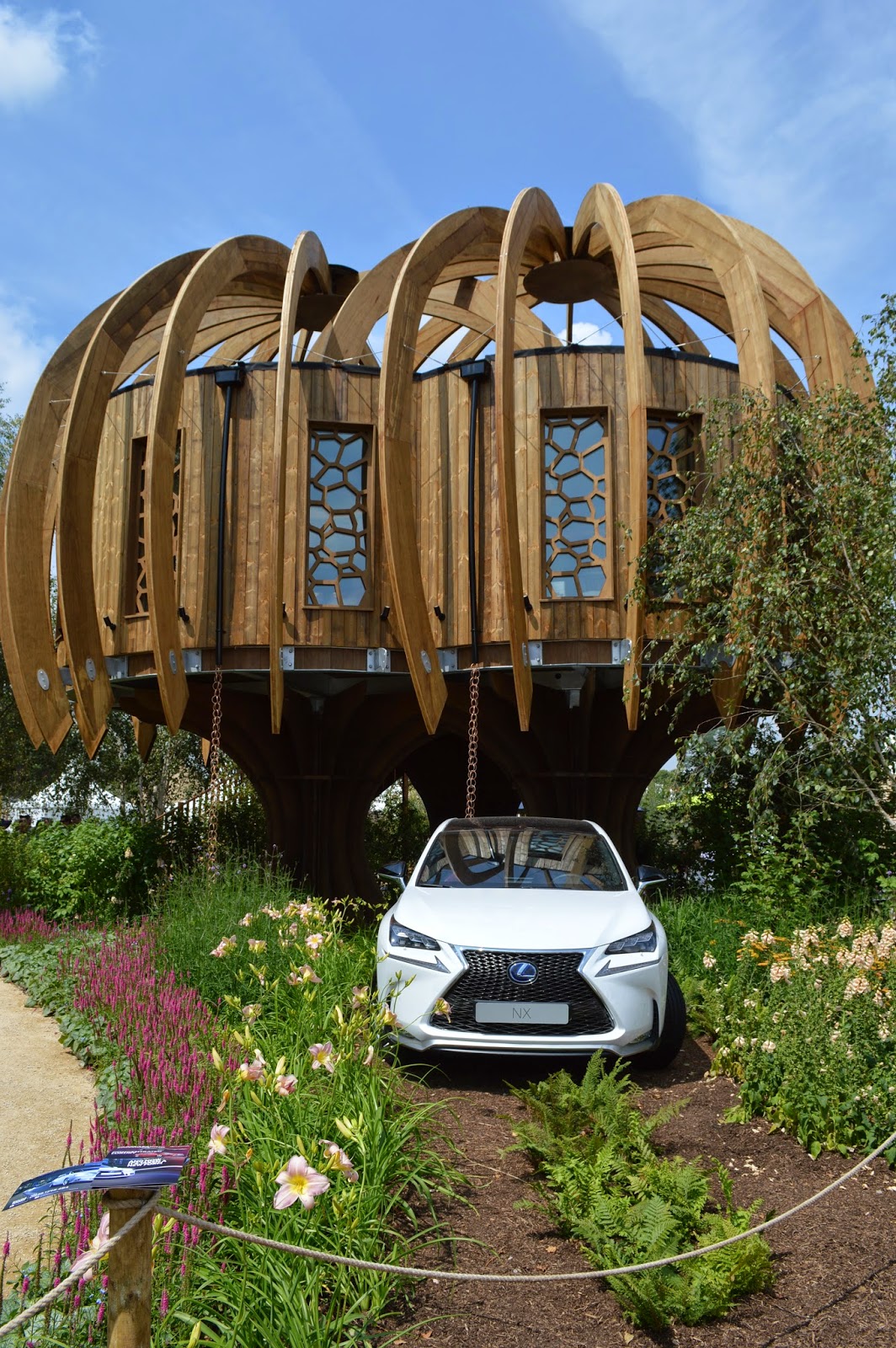 The Essence of Australia was the Best in Show, this is probably because it was clearly the best in my uneducated opinion.  It did it no harm at all that it was a very hot day when I was viewing this, so the hot colours and native planting gave it a real atmosphere.  I really liked the dark orange of the paint, it picked up the colours of the soil and planting well. 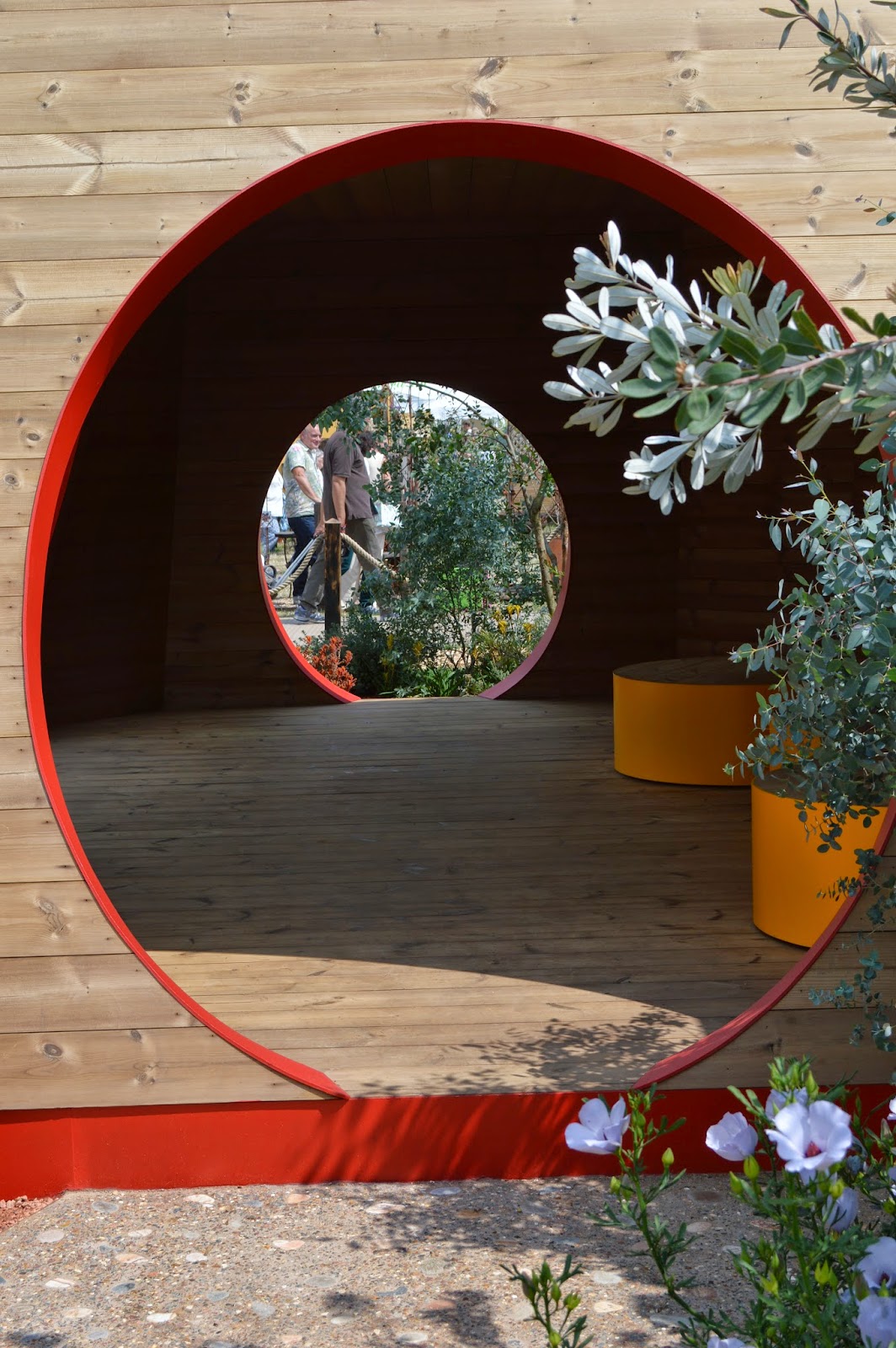 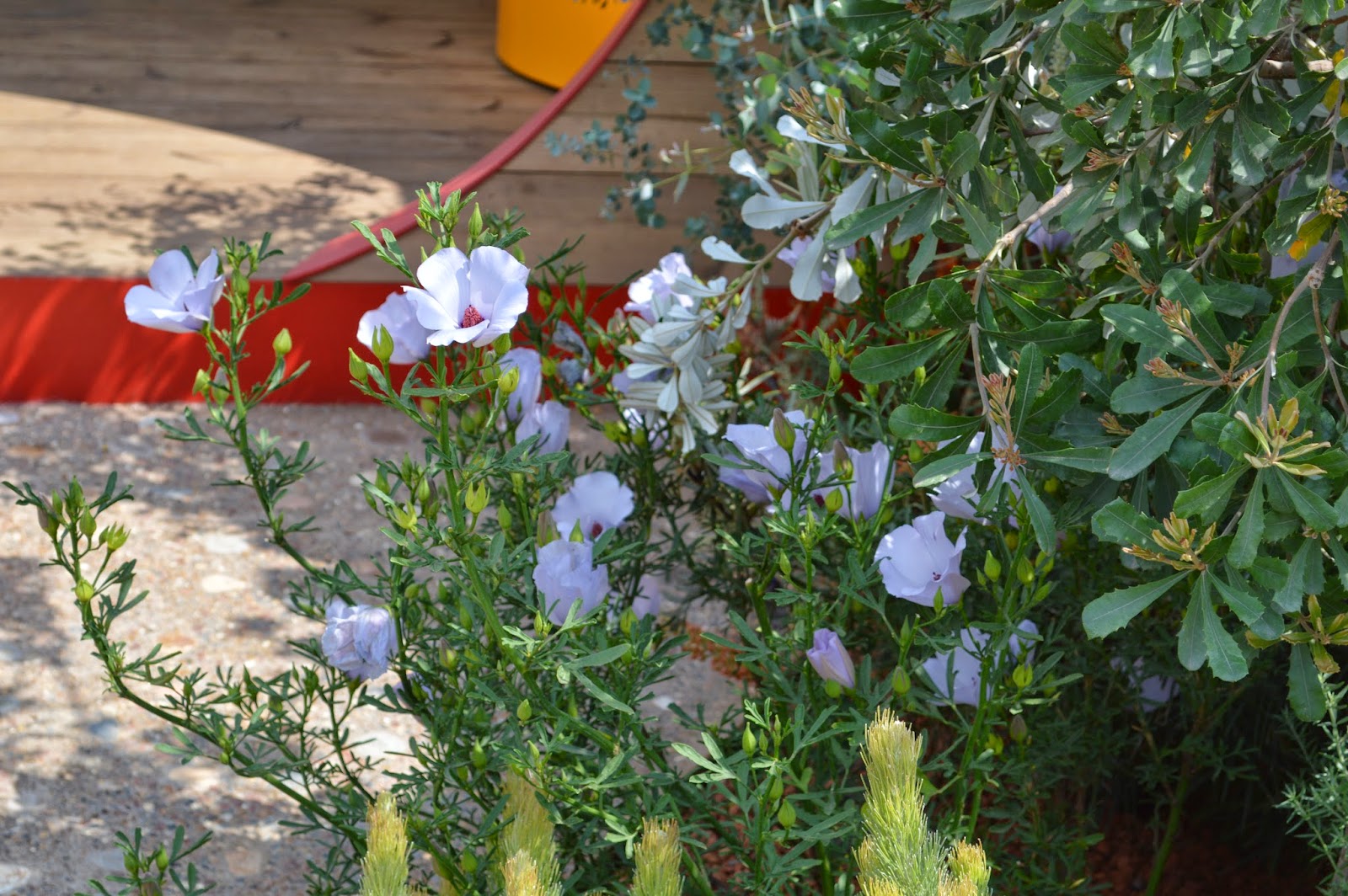 The Flintknappers Garden was also worthy of note, it also provided a fine demonstration that where-ever you stood to take a photo, there was someone doing exactly the same thing on the other side.  It was a great garden, beautifully put together with fine planting. The NSPCC Legacy Garden by Adam Woolacott and Jonathan Smith demonstrated well the decades of the history of charity.  It also managed to draw attention to itself in simple and fairly understated ways, the addition of a pull-along duck was enough to make me stop and concentrate on it (simple things.....) 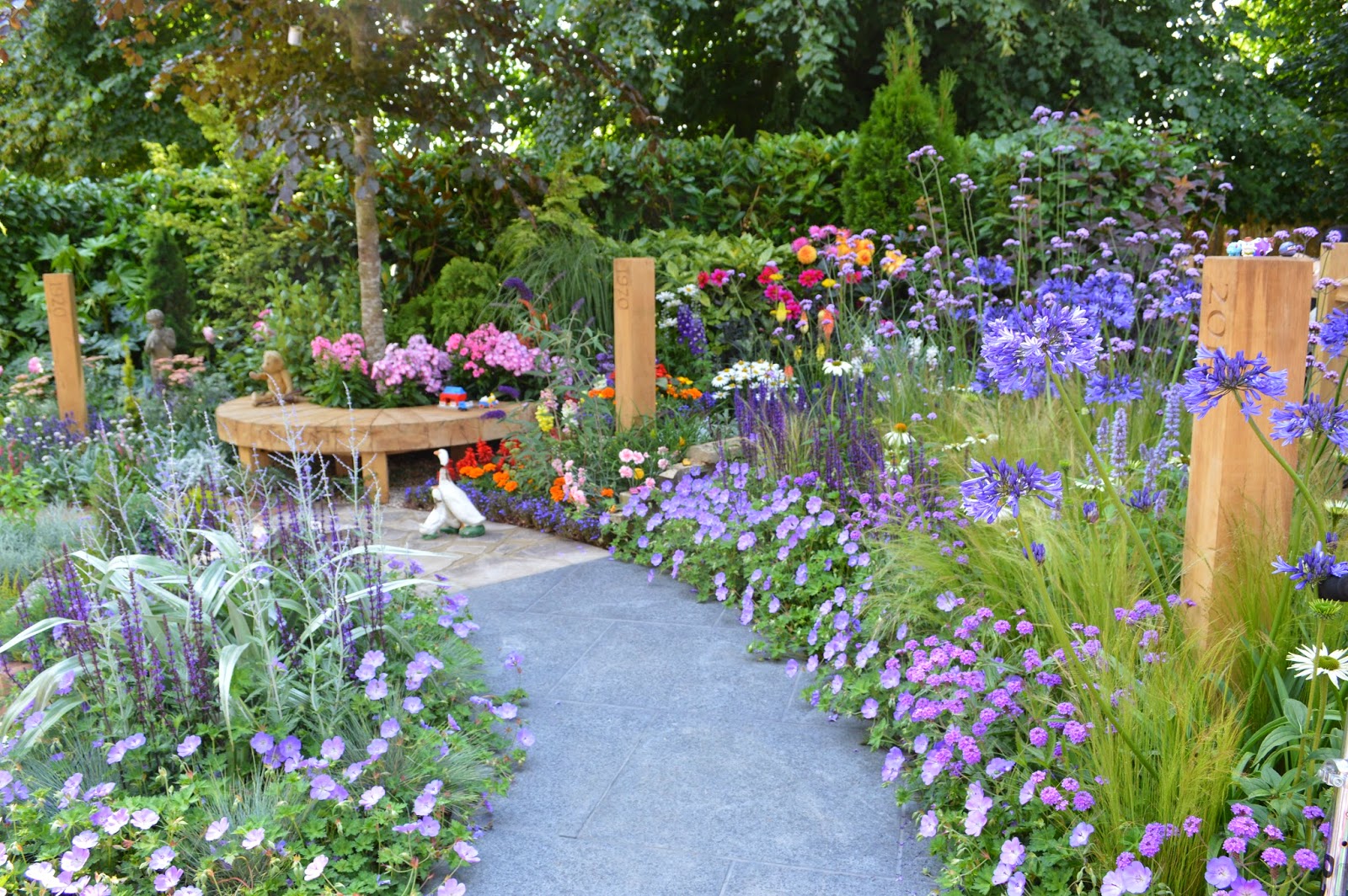 The One Show Garden also made me pause, I had mixed feeling about it to be frank.  Its probably best described as I sort of liked it.  It had nice planting but there was nothing that made me enthuse.  This was also not a show garden apparently but I thought it would have got a medal of some sort if it had have been. 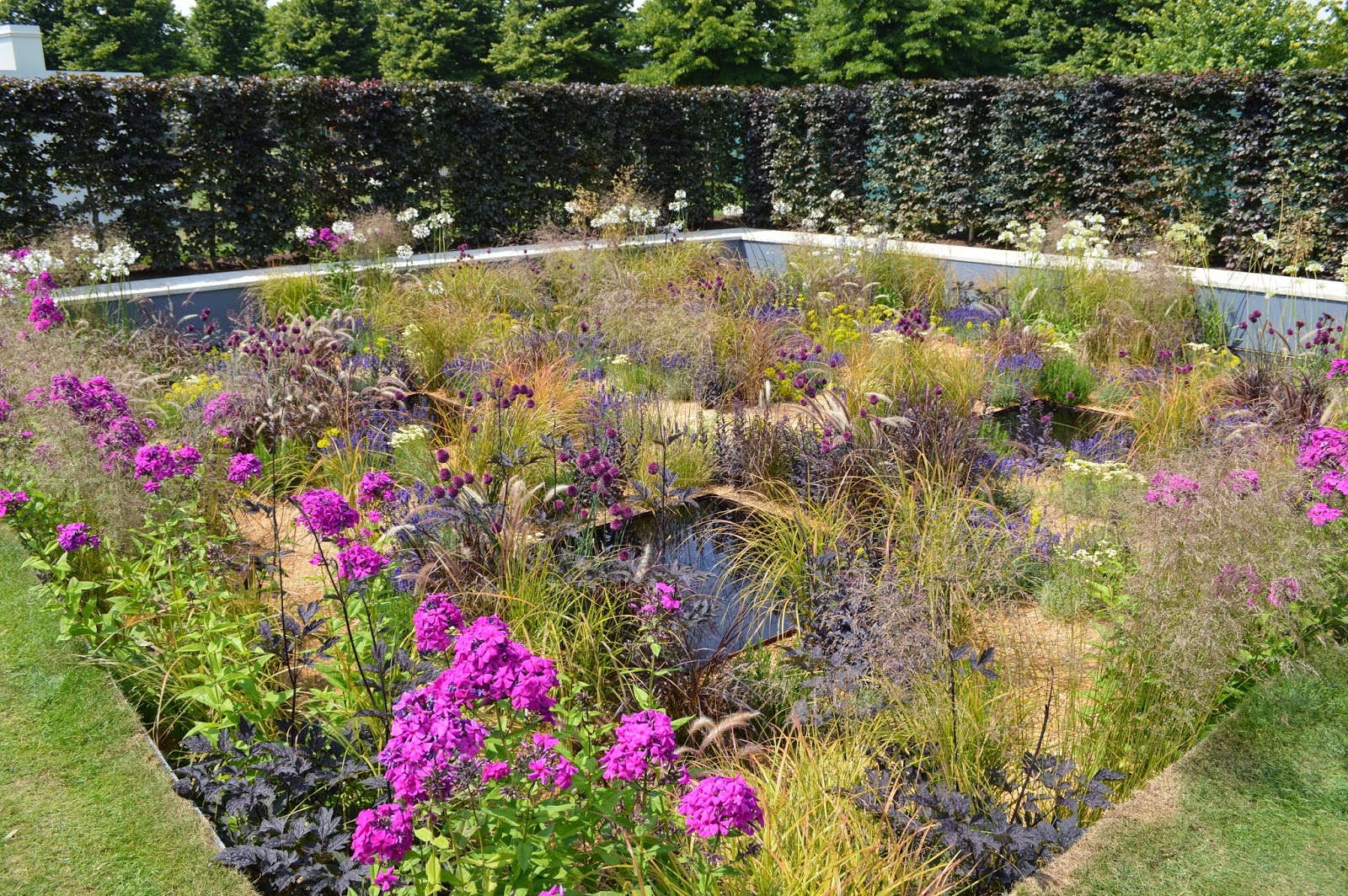 I rather liked the Vestra Wealth's Vista.  It just sort of worked.  Can't think of much more to say than that, it was a cracking bit of good design by Paul Martin. 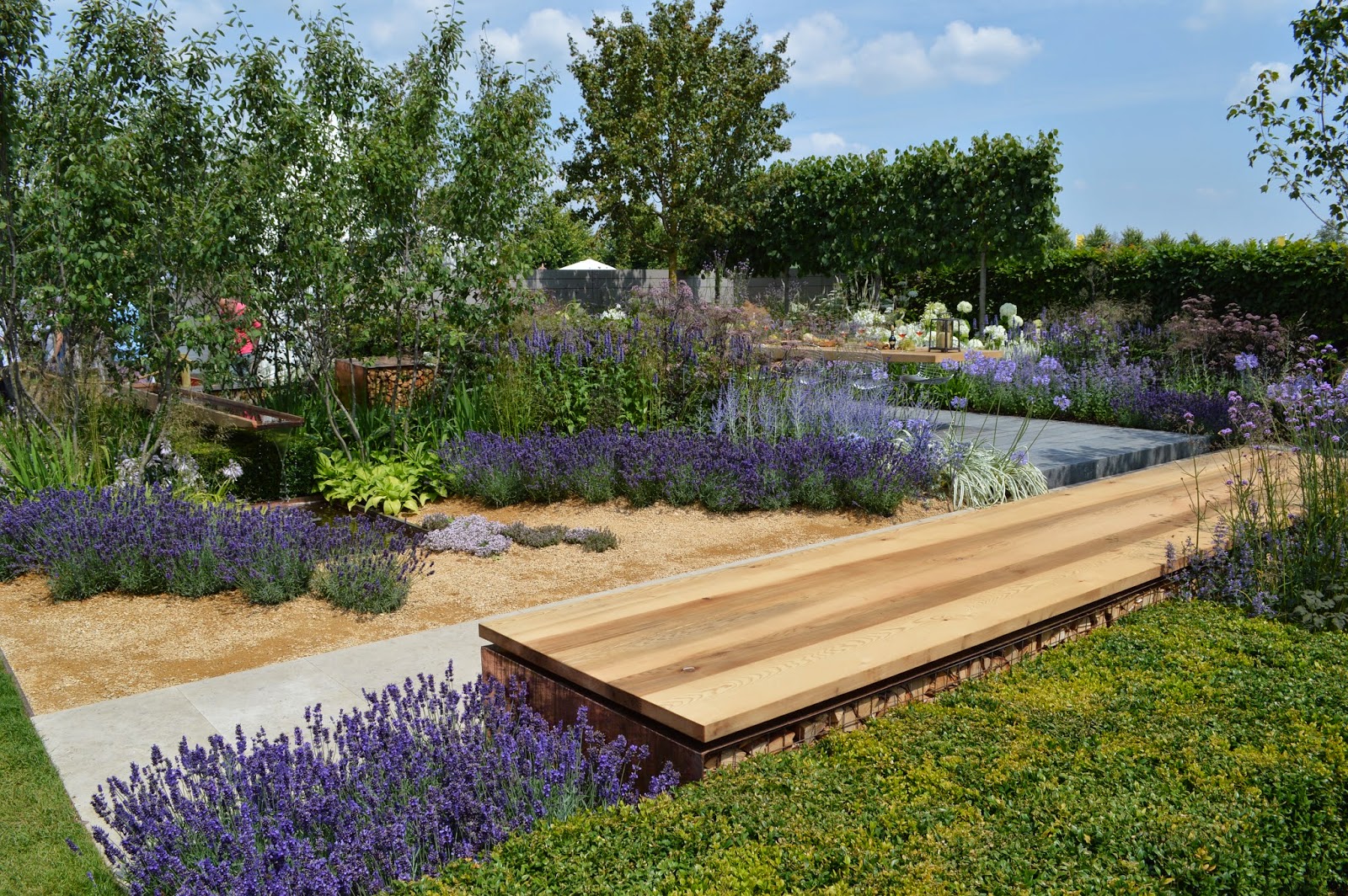 As well as these show gardens there were other displays such as this giraffe-theme bedding plant display, which whilst I know we should all look down on bedding plants and probably have a little sneer, for the sheer love of colour and fun I thought this area was brilliant. 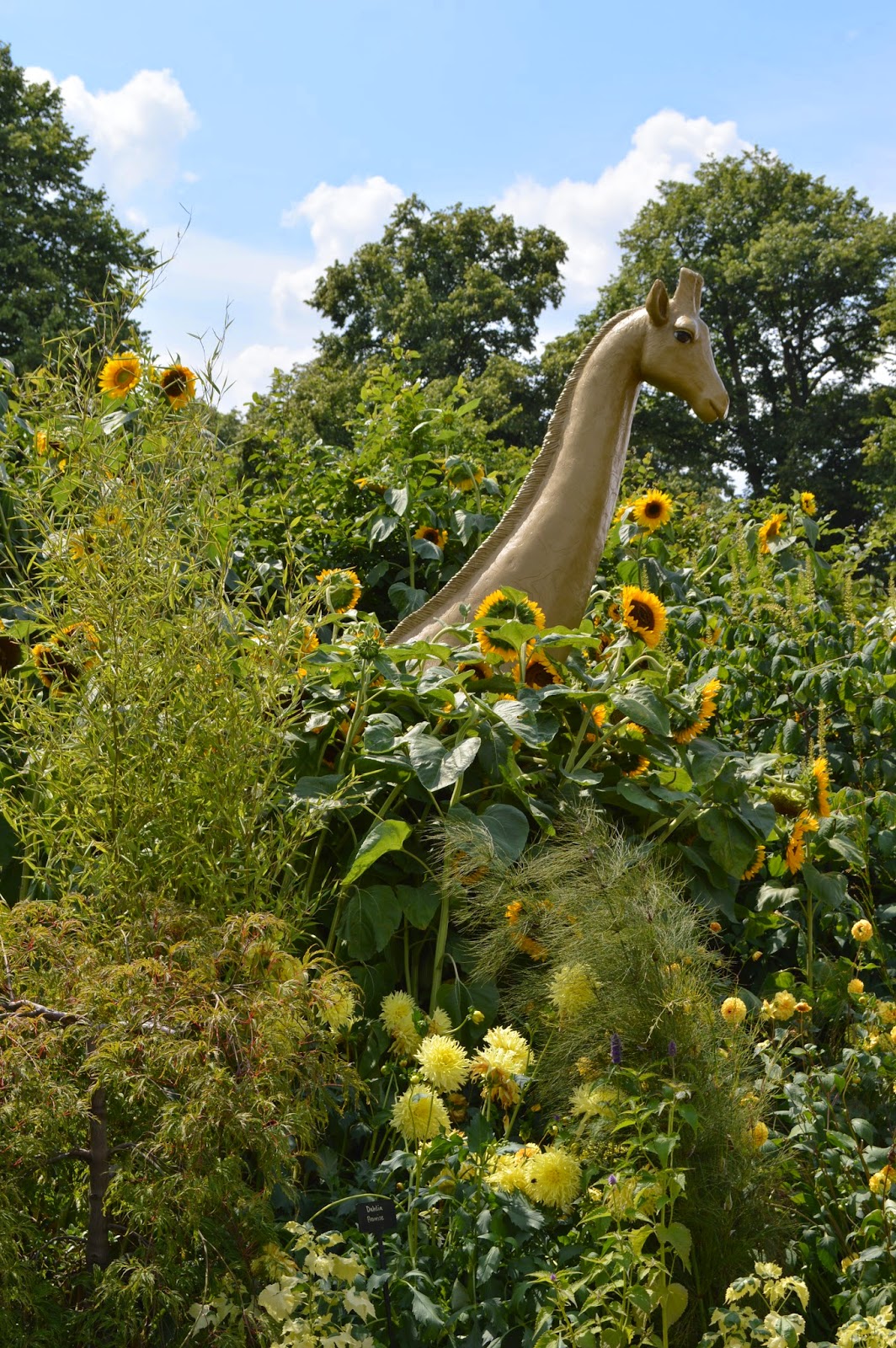 and this bright patch was just covered in bees. 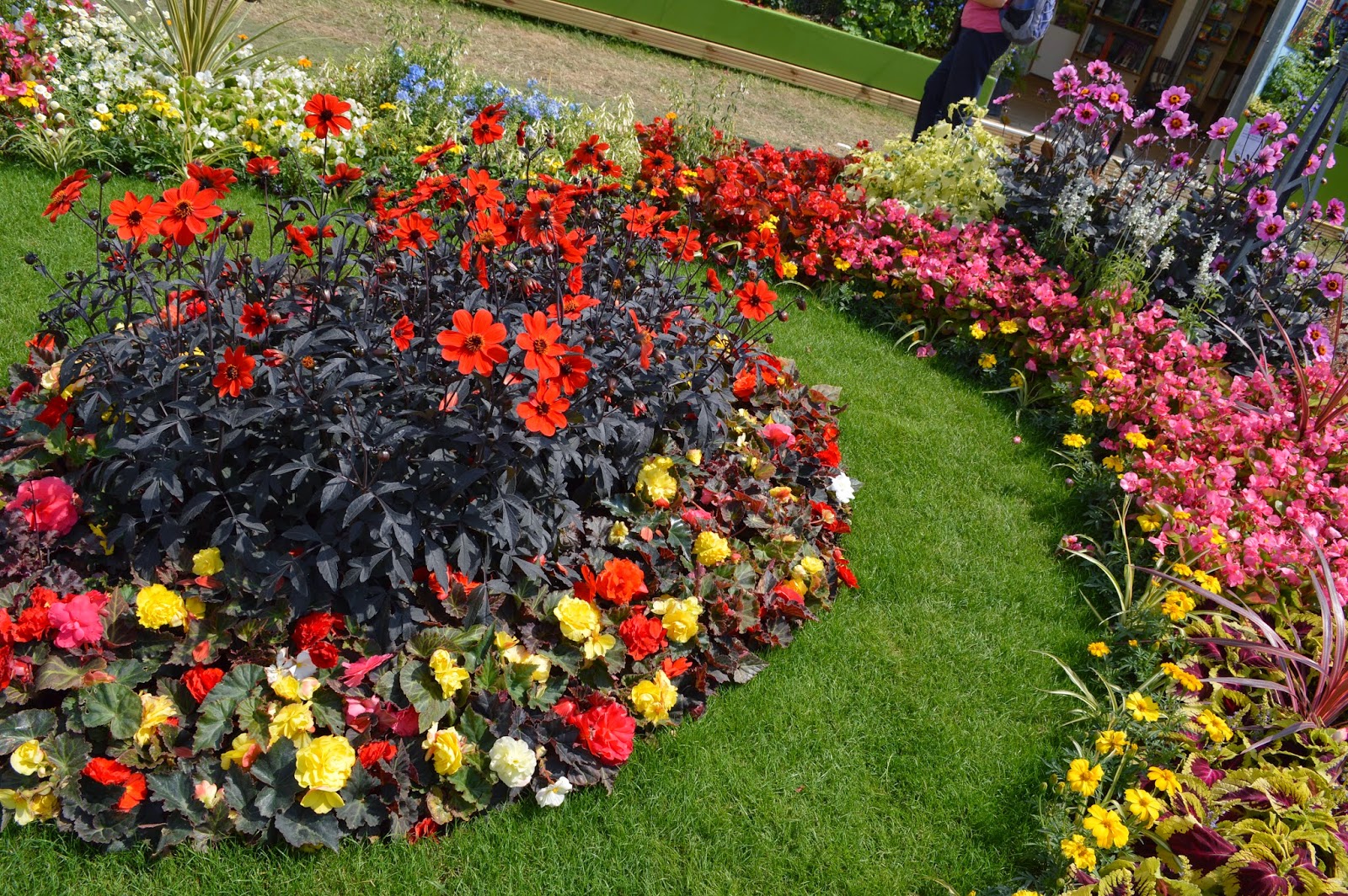 There were some odd looking by-standers at the show 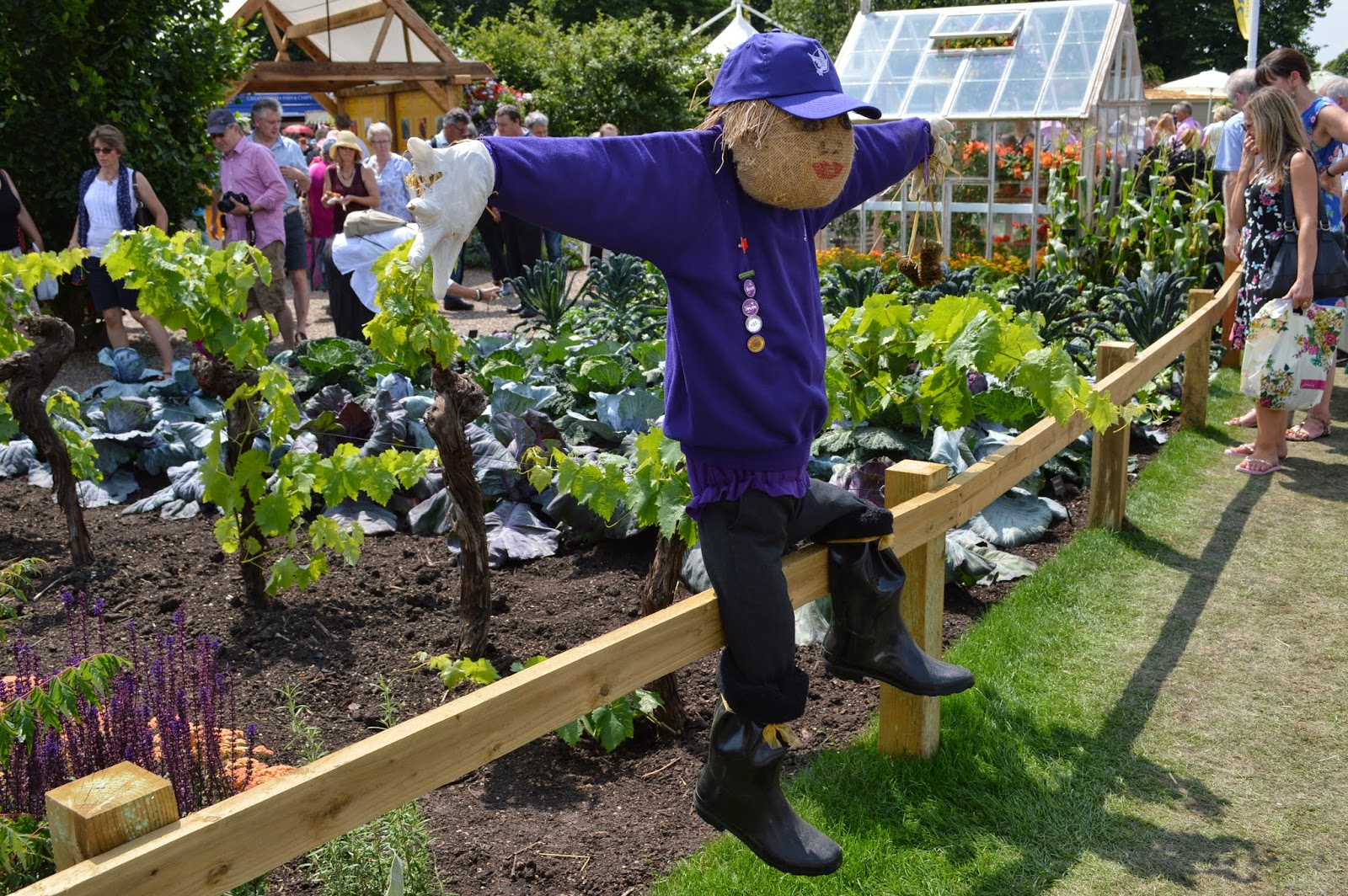 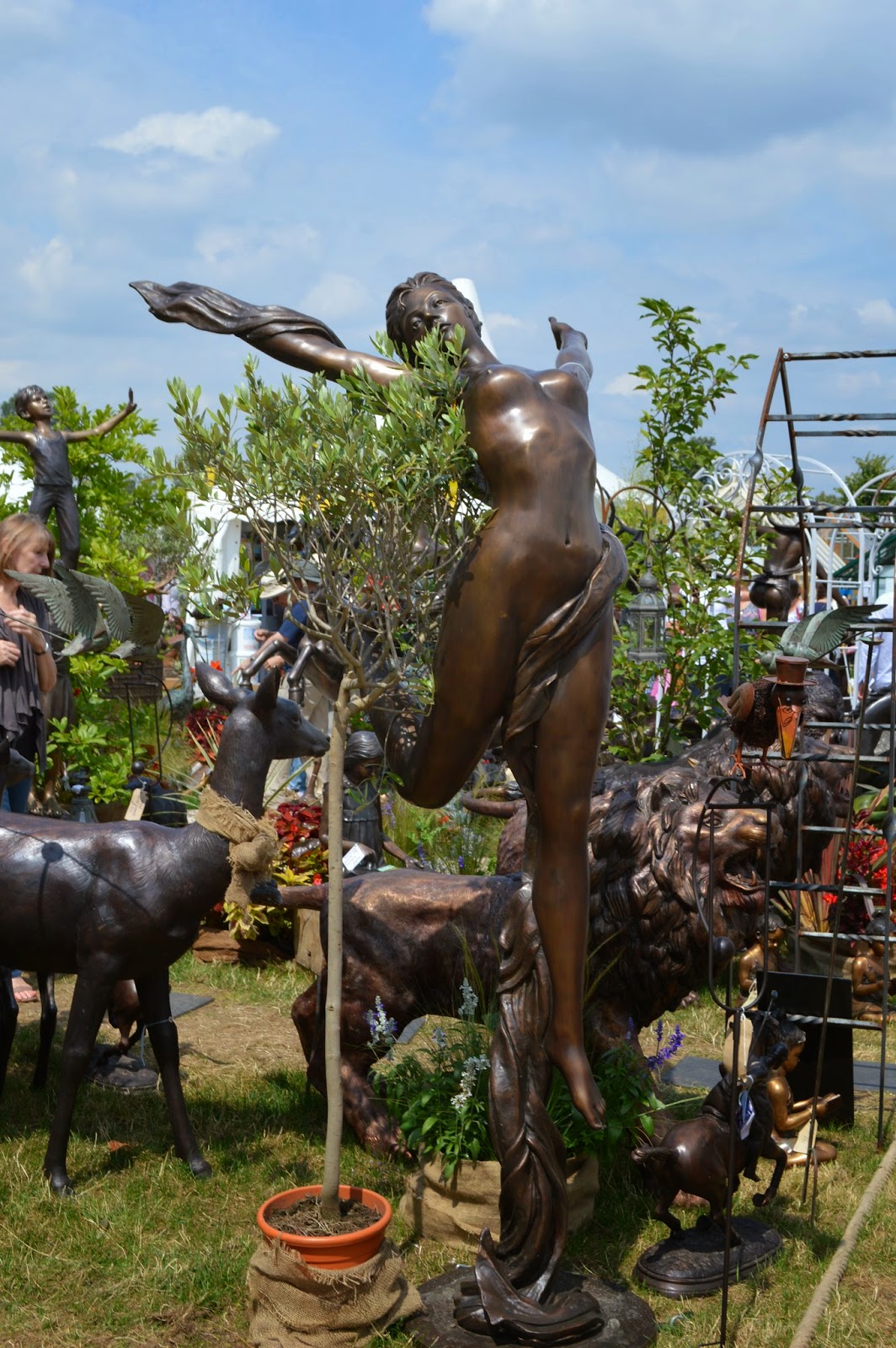 All in all Hampton Court was great fun and a hugely enjoyable show.

So, to my epiphany, I realised this as I was walking past the show gardens on one side of a walkway with selling stalls on the other.  I realised that my attention had not been on buying and not really as much on show gardens either as I would have liked.  I am clearly a simple soul, I either want to go to buy or to look, I am not good at both.  So Chelsea will remain the one I want to see most show gardens at and if I go again to Hampton (which I probably will) I shall maybe focus more on buying - or not, who can say.