July 31, 2014
July has been hot, yes, really hot.  It has been a bit rainy but as I write this the garden is getting rather dry and new plantings are needing watering, and there have been new plantings. 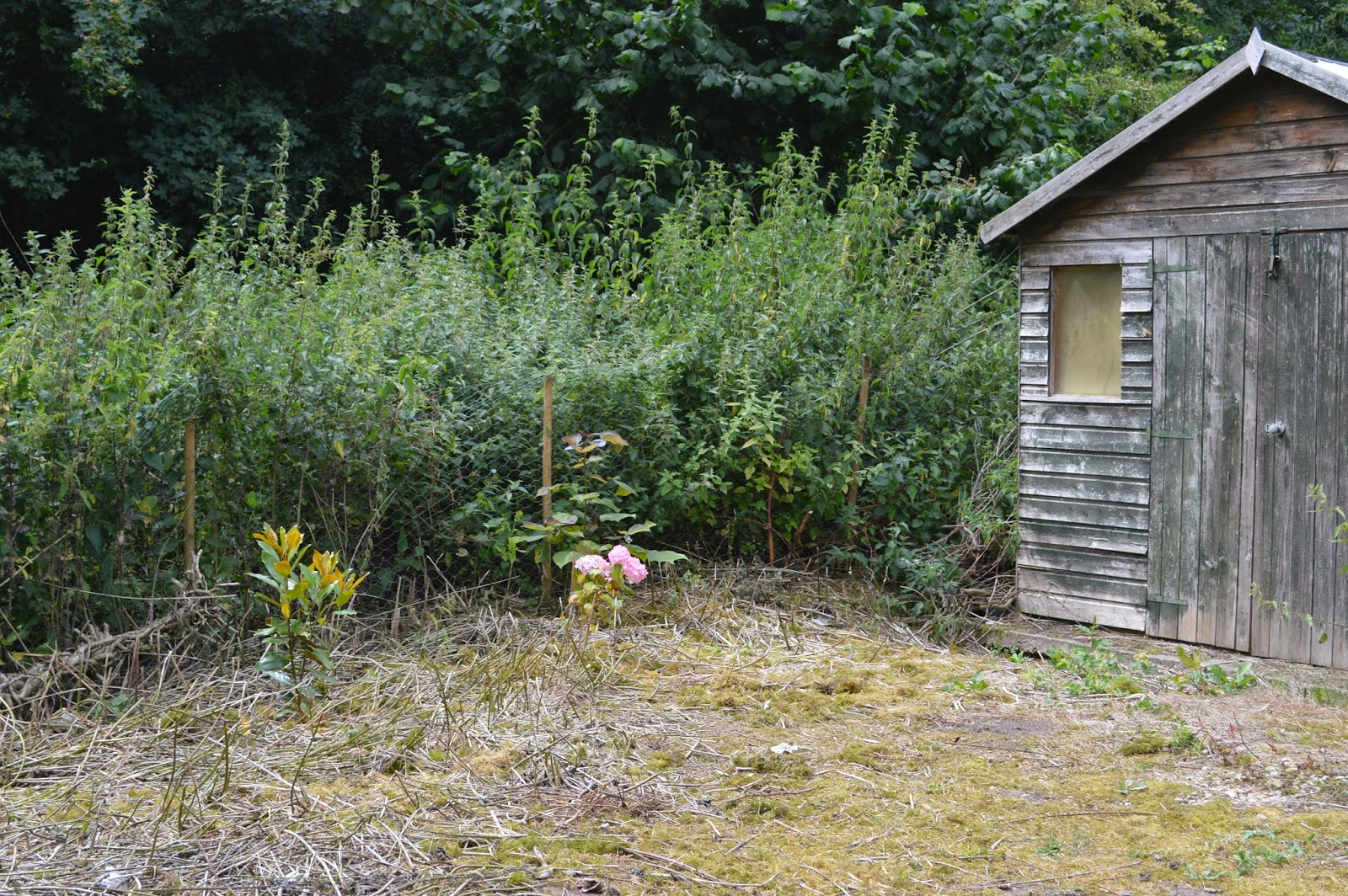 The driveway has seen some planting, not much, but there is now a hydrangea, a Magnolia 'Little Gem' and a Catalpa 'Purpurea' in place.  They are getting lots of water as it is not an ideal time to plant such things but I thought they stood more chance of surviving in the ground then they did if they stayed in pots.  Time will tell.  (and yes, the shed still needs painting and its roof re-felting). 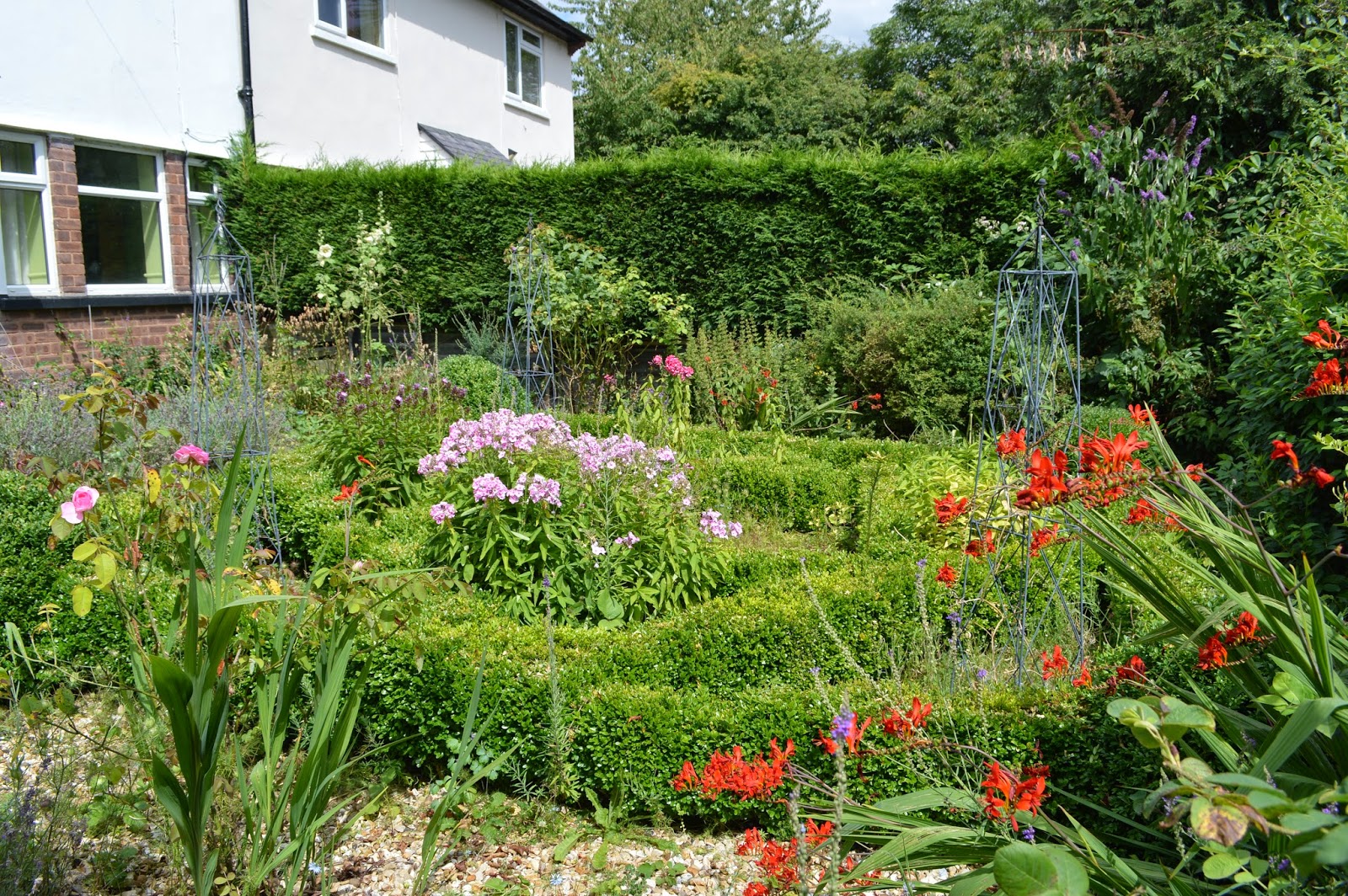 Into the front garden and that is still looking ok.  The box hedging looks, well, hedgy, it is still a little patchy in parts but it is pretty much there now.  That's only taken about six years. 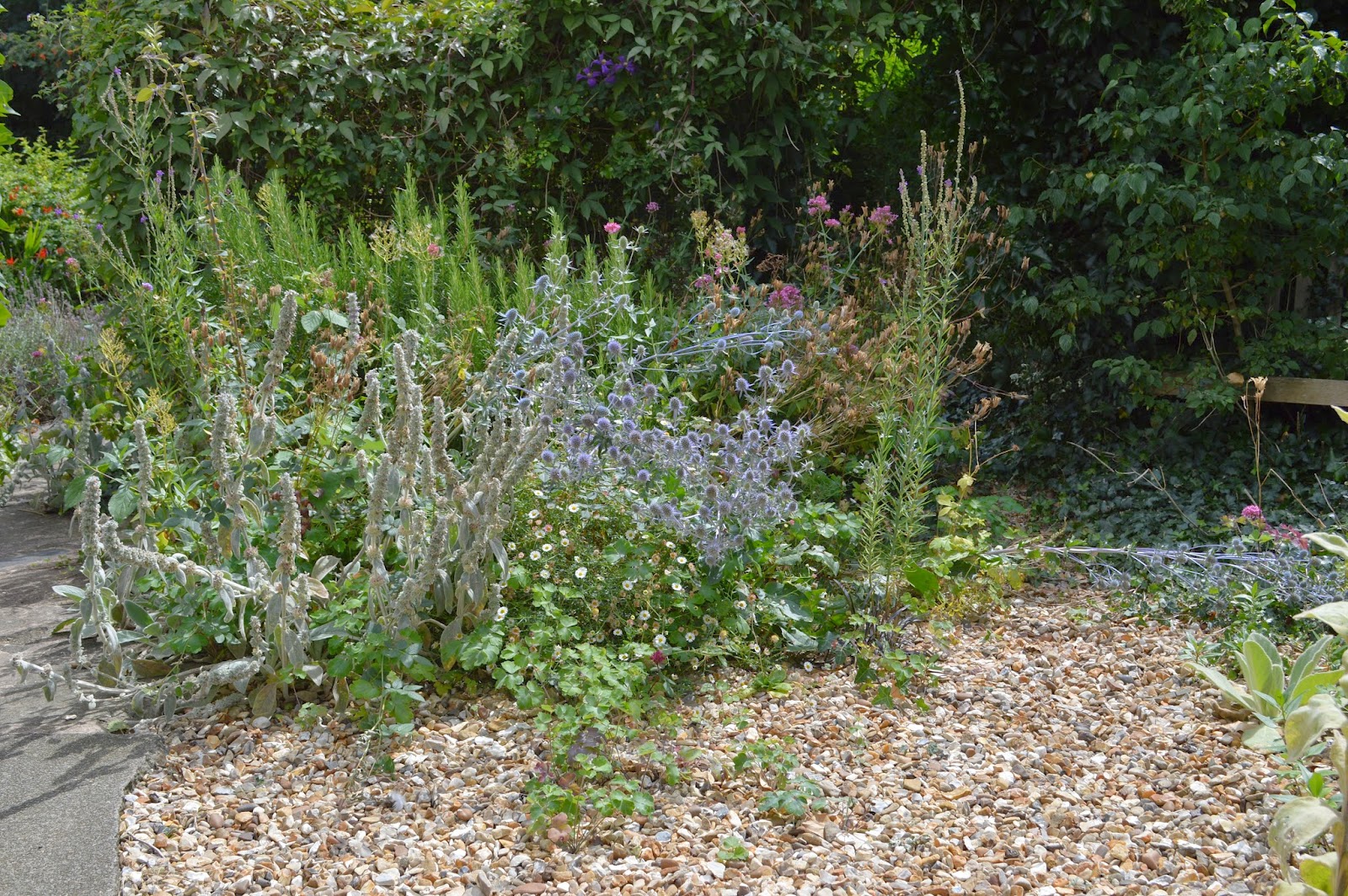 The Gravel Garden is coming on well this year, the mix of rain and sun has made it happy. 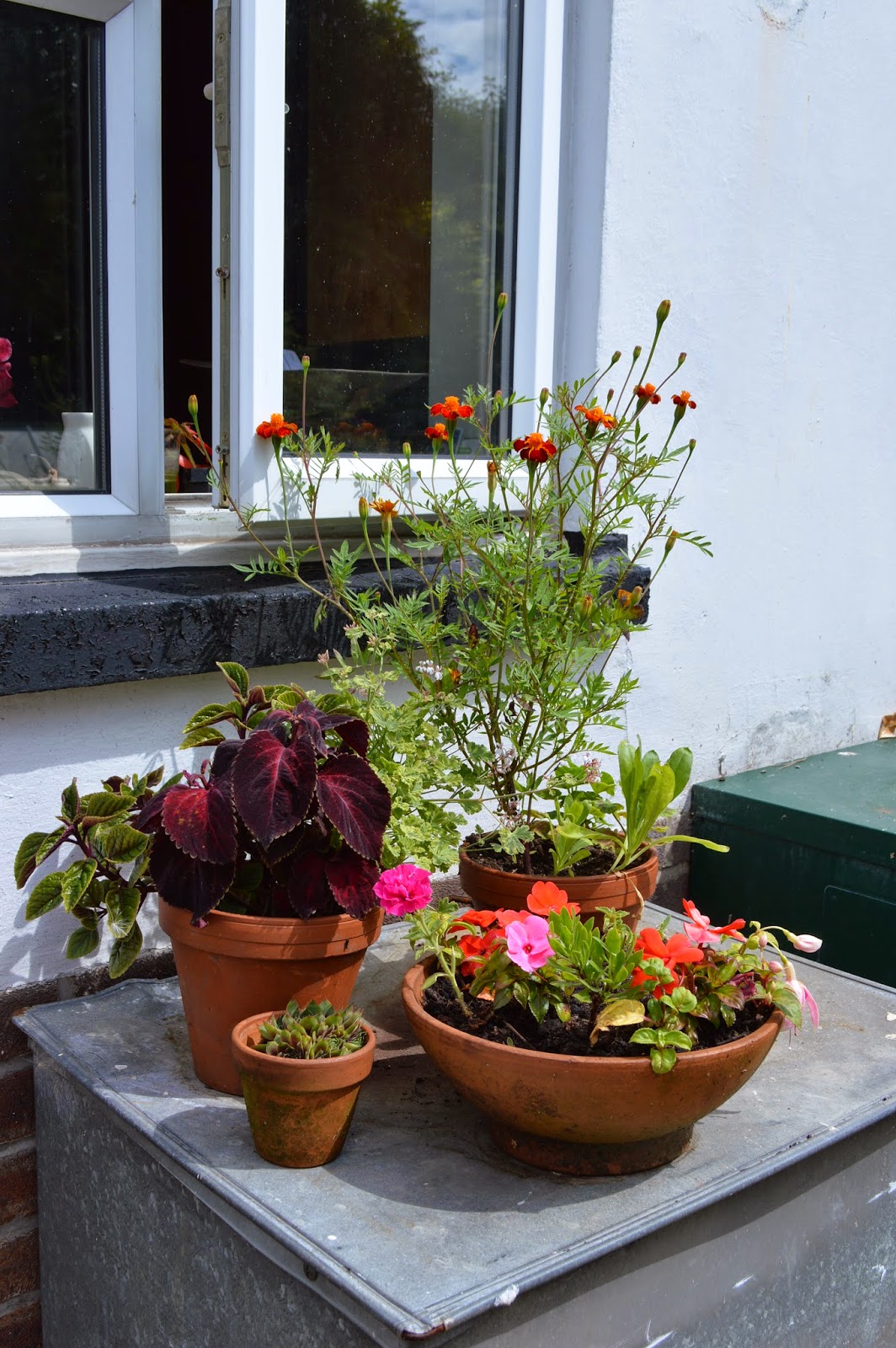 The grey tin box by the kitchen window (I think its meant to be a coal bunker but its never used as such), is now home to a few pots.  In the recent heat I think it might have been baking them. 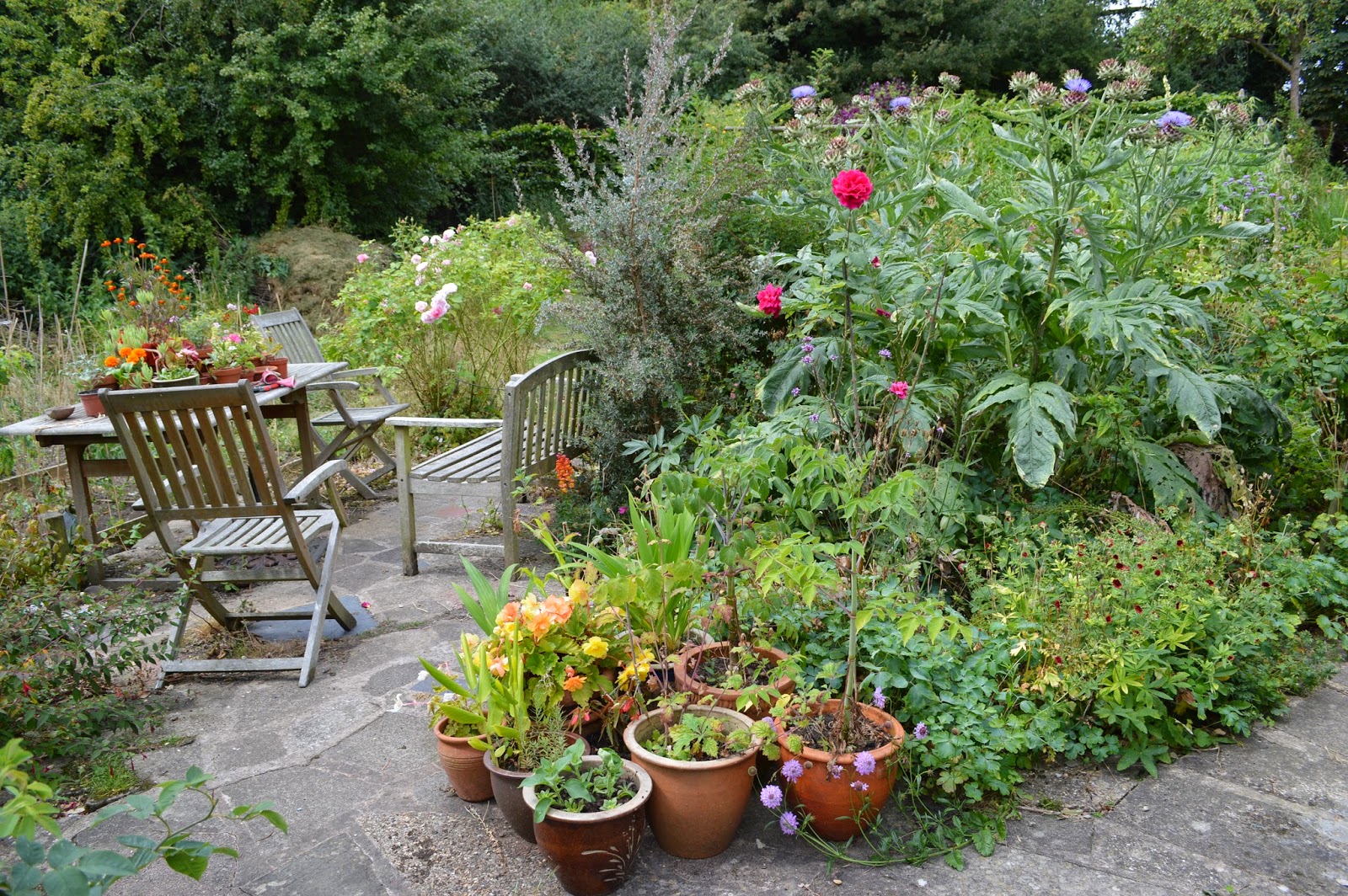 Into the back garden there are more pots (I have a lot of pots this year) and the borders are looking rather full. 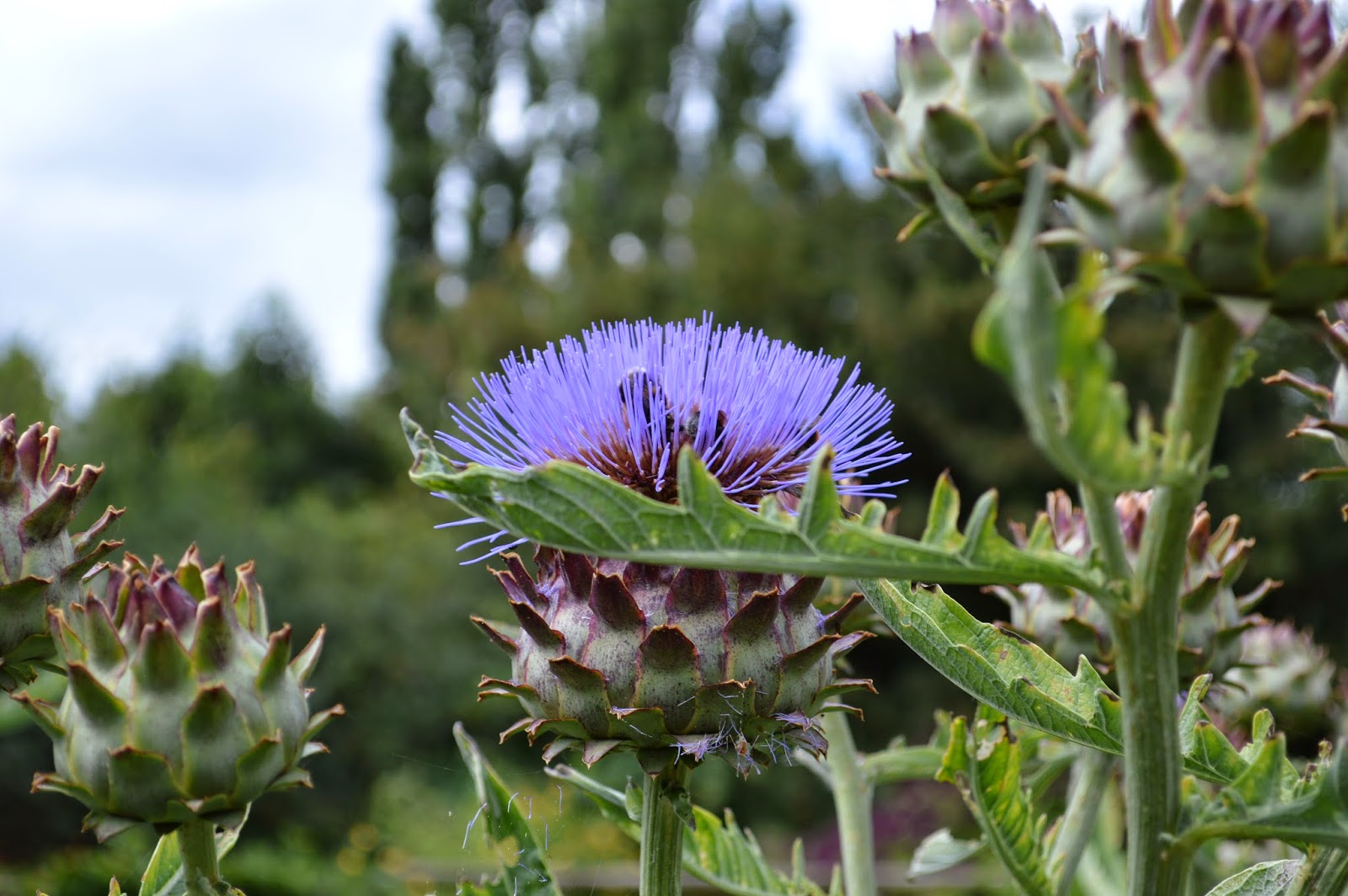 The cardoon in the Coal Bunker Border is flowering now, much to the bees' delight. 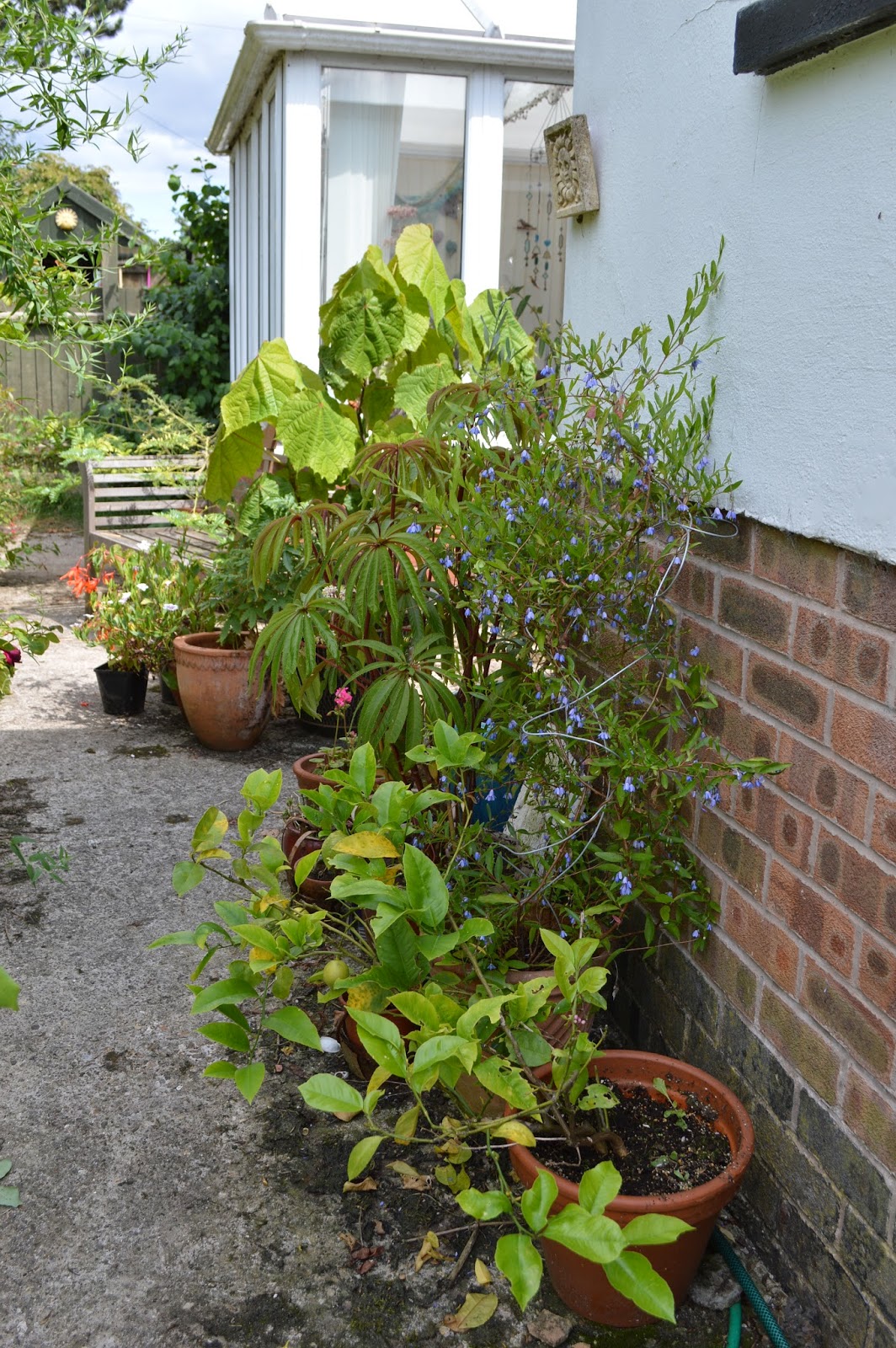 The back of the house is lined with pots, 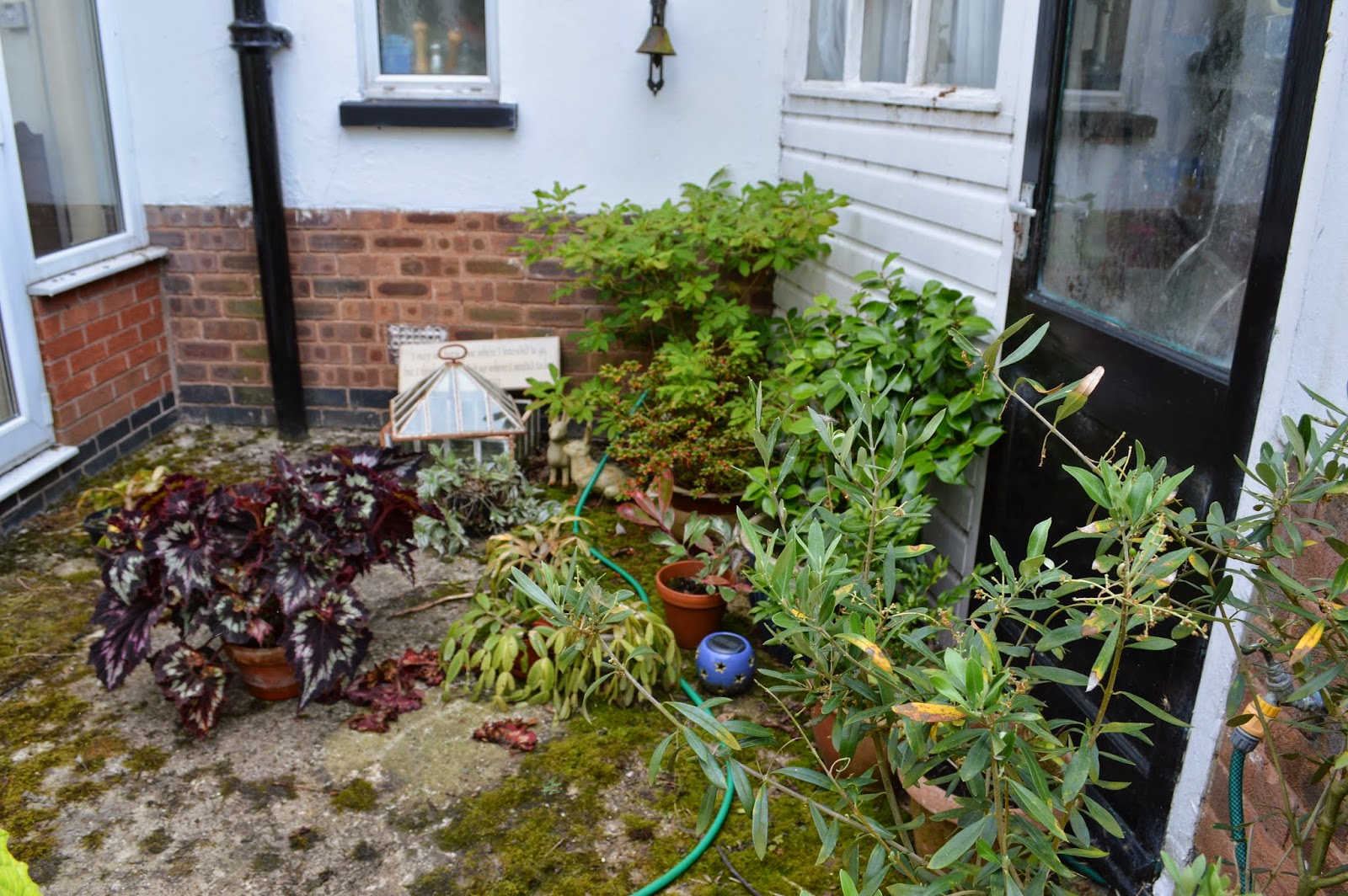 The Courtyard is full of pots, including most of the plants from the Conservatory that are having a bit of outside time. I vaguely suspect they re-arrange themselves when I am not looking. 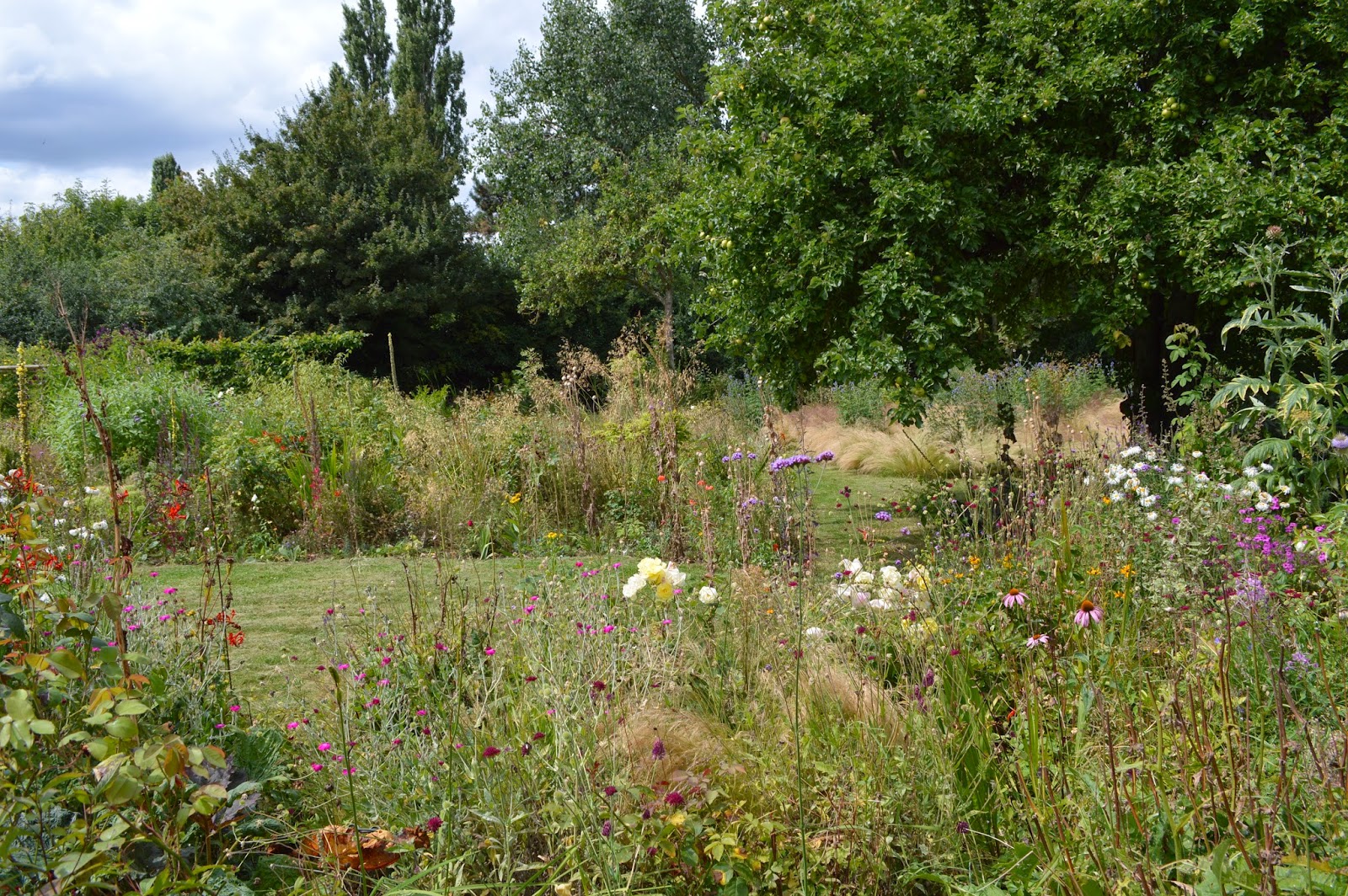 The view from behind the Conservatory Border across the formal lawn is looking good at the moment.  For once I cut the lawns before taking these photographs, I usually take them and then think how much it needs cutting. 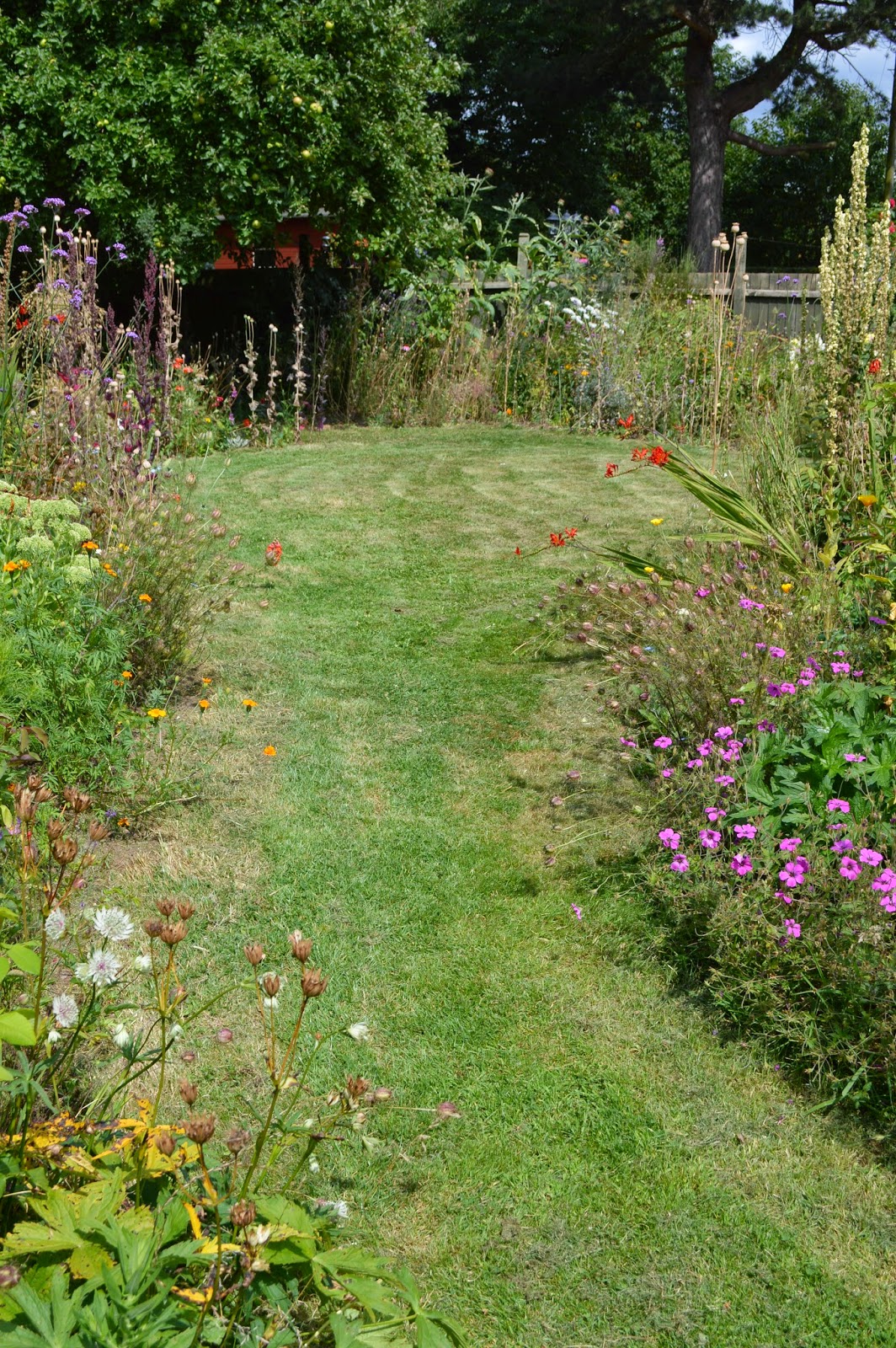 I also like the view along the Long Shoot at the moment.  It is looking more or less how I want it to.  It needs a bit more colour in some places but I think I am quibbling. 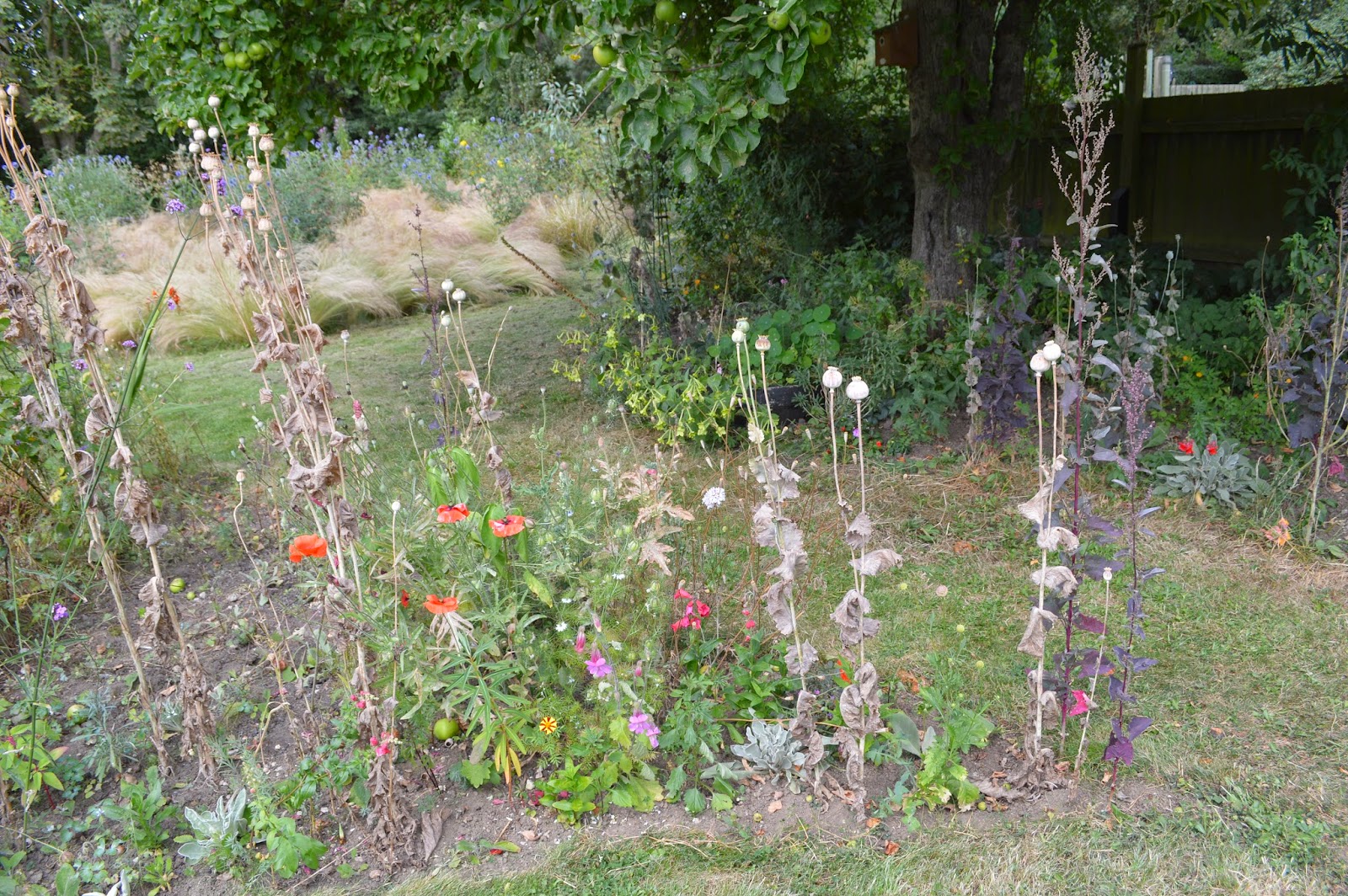 The Burtonesque Curl is filling out nicely now.  It has some Shirley Poppies, some penstemon and Rehamnia and looks better than I hoped it would in its first year. 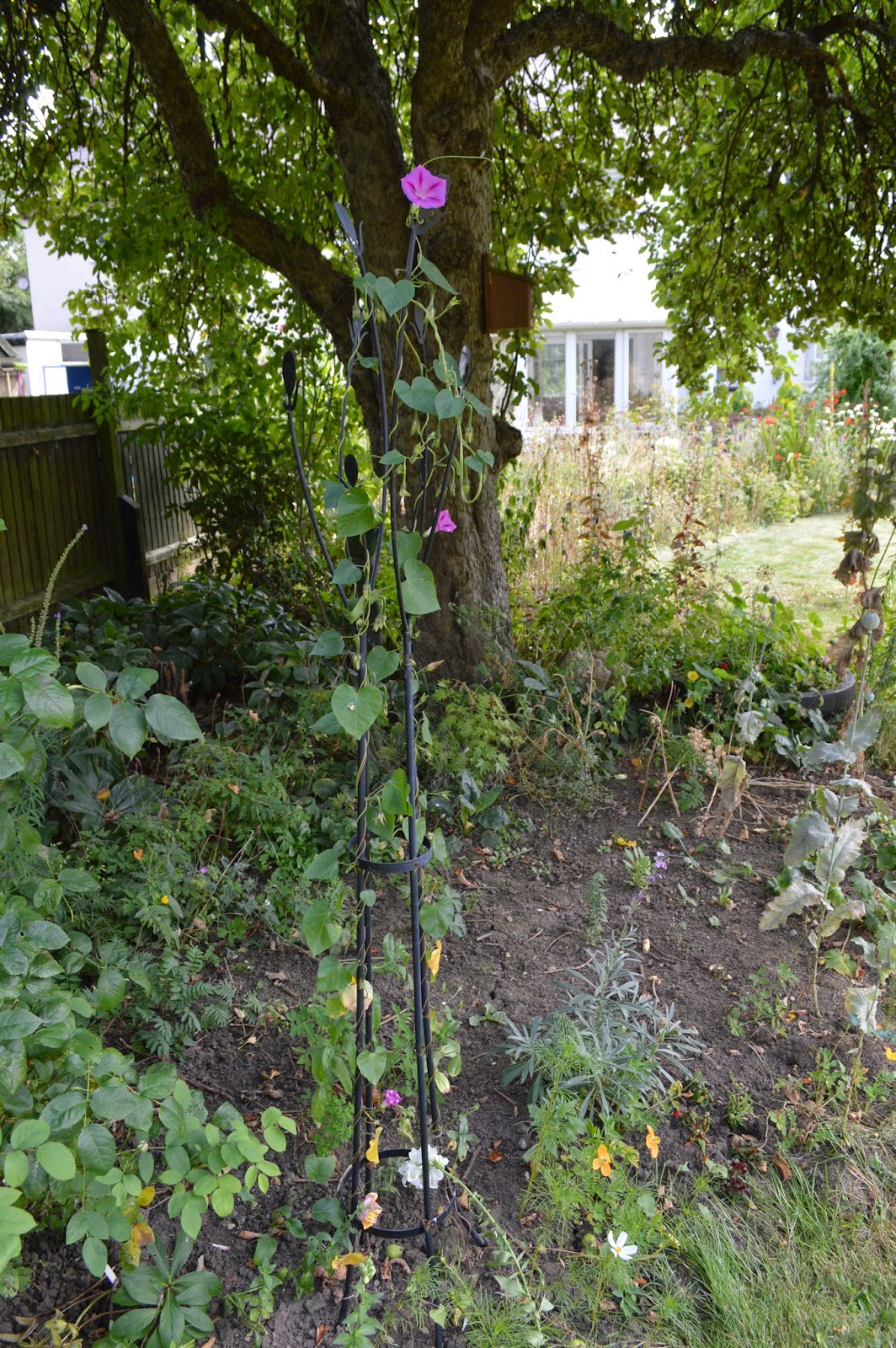 The Spring Border is still a bit sparse where I extended it, but it is slowly getting planted up. 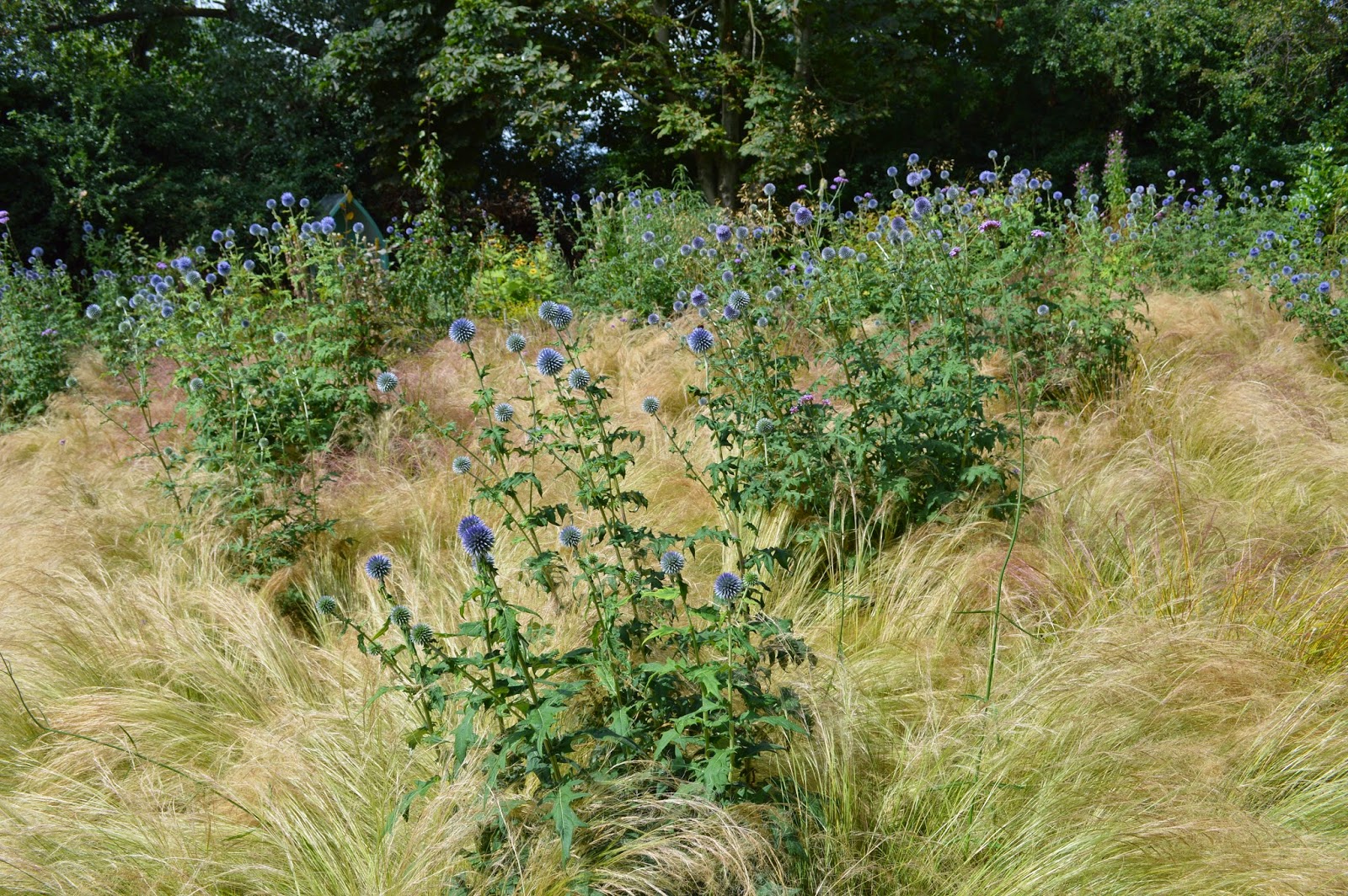 The Prairie Borders are fantastically blonde, the echinops made a good contrast with the grasses I think. 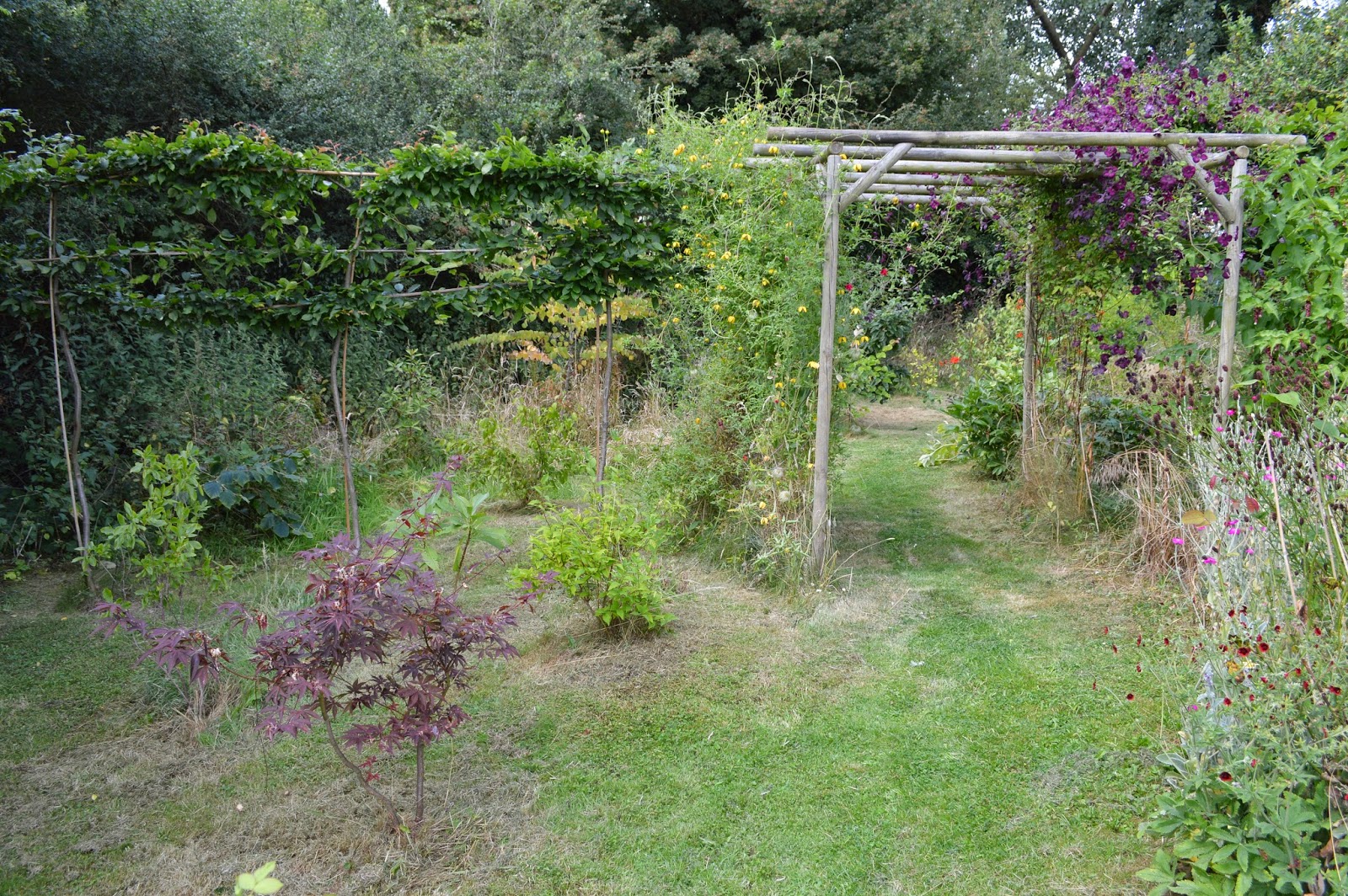 The way into the Wild Garden goes past the Four Sisters who are all growing well, 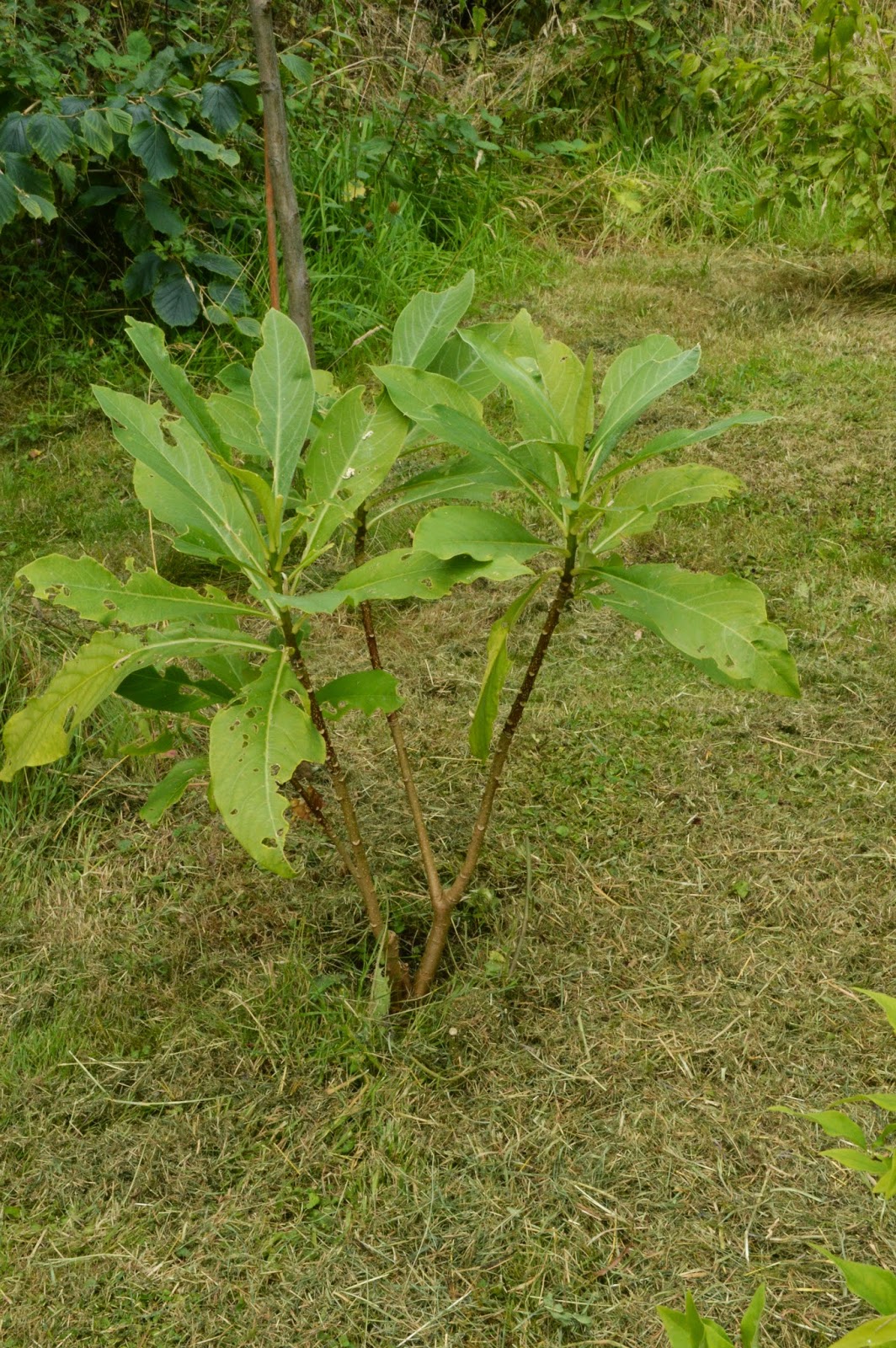 I am particularly pleased to say that the Edgeworthia is growing well, the leaves are a bit slugged but healthy enough. 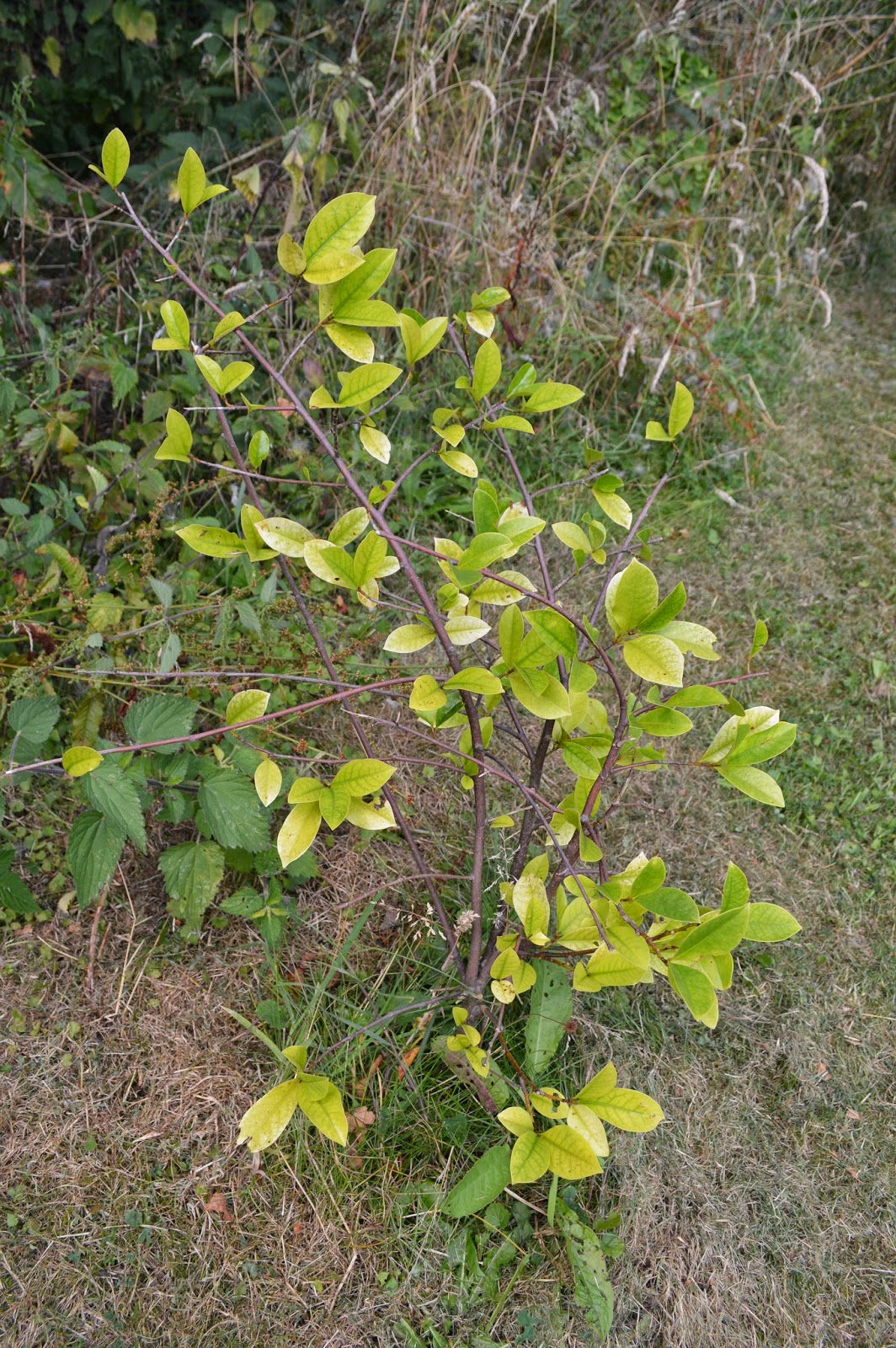 The Magnolia 'Fairy Blush' is looking a lot better too. 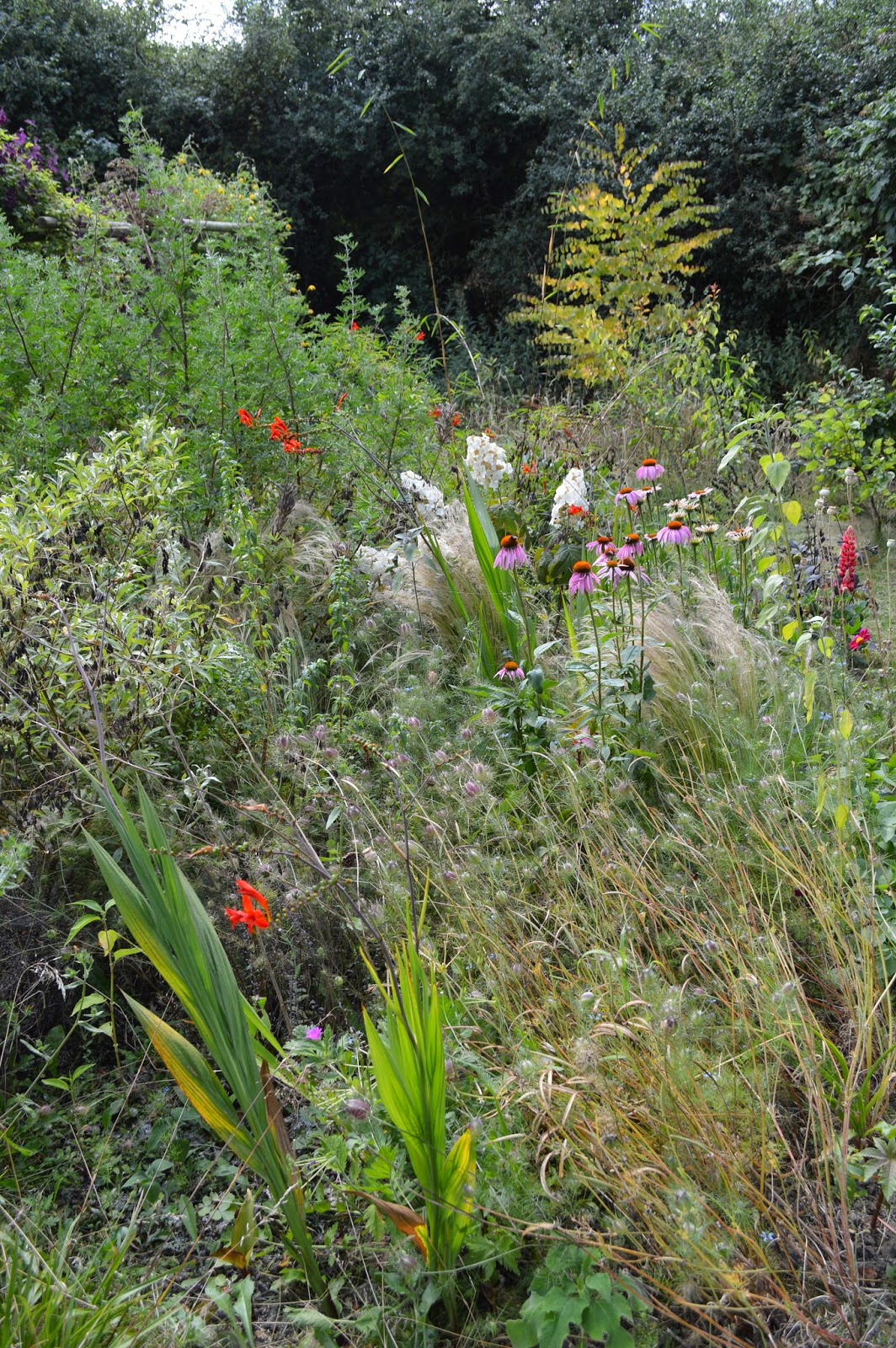 The Tree Lupin Border is looking quite full, the tree lupin itself has finished flowering for now but you can see the plumes of the Hydrangea quercifolia and the reds of  the Crocosmia lucifer.  The dahlias are just starting to flower and I am trying to make sure they get enough water. 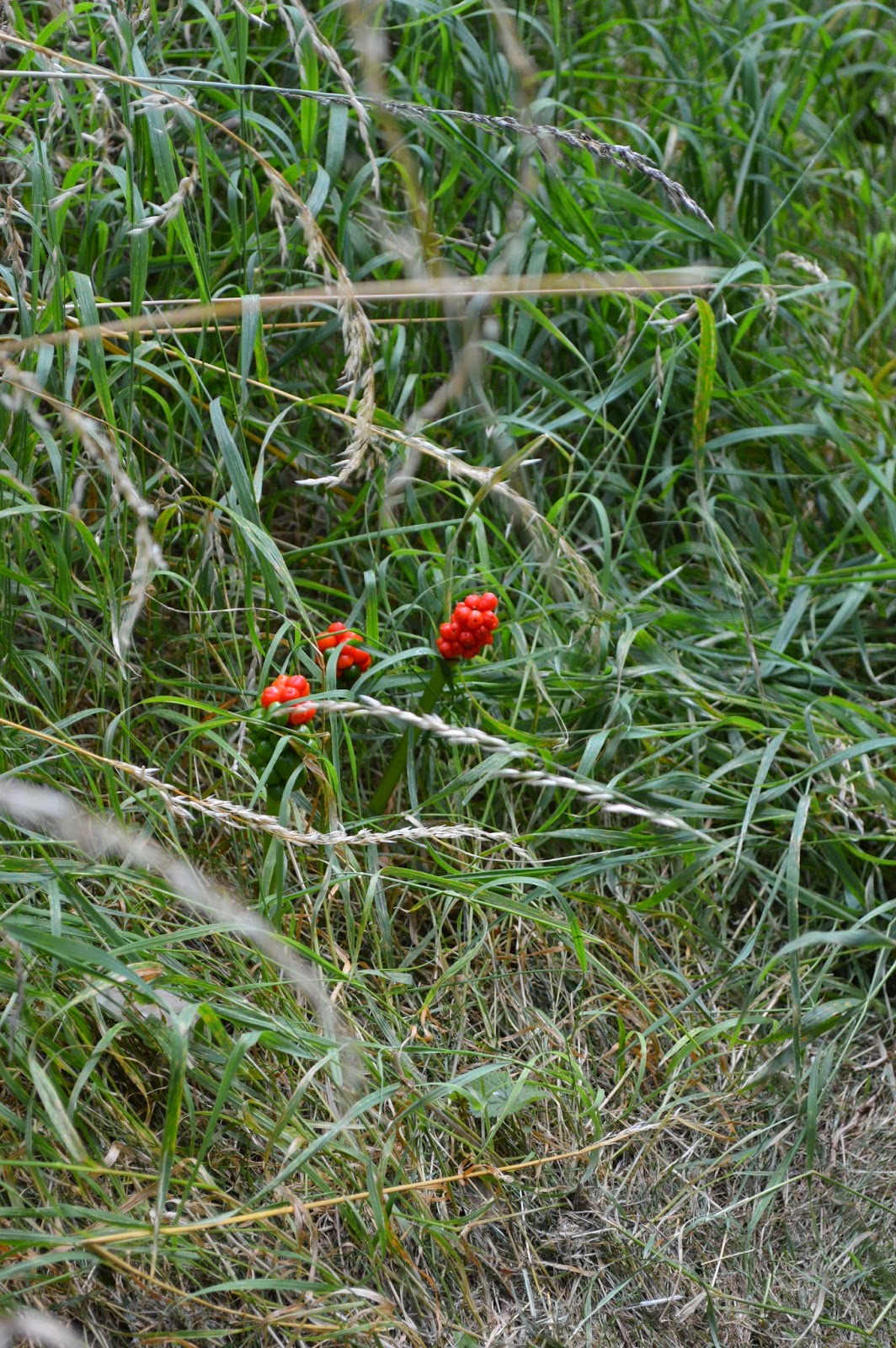 In the Wild Garden there are lots of these berries from the Arum maculatum.  I love the red accent points they make dotted around. 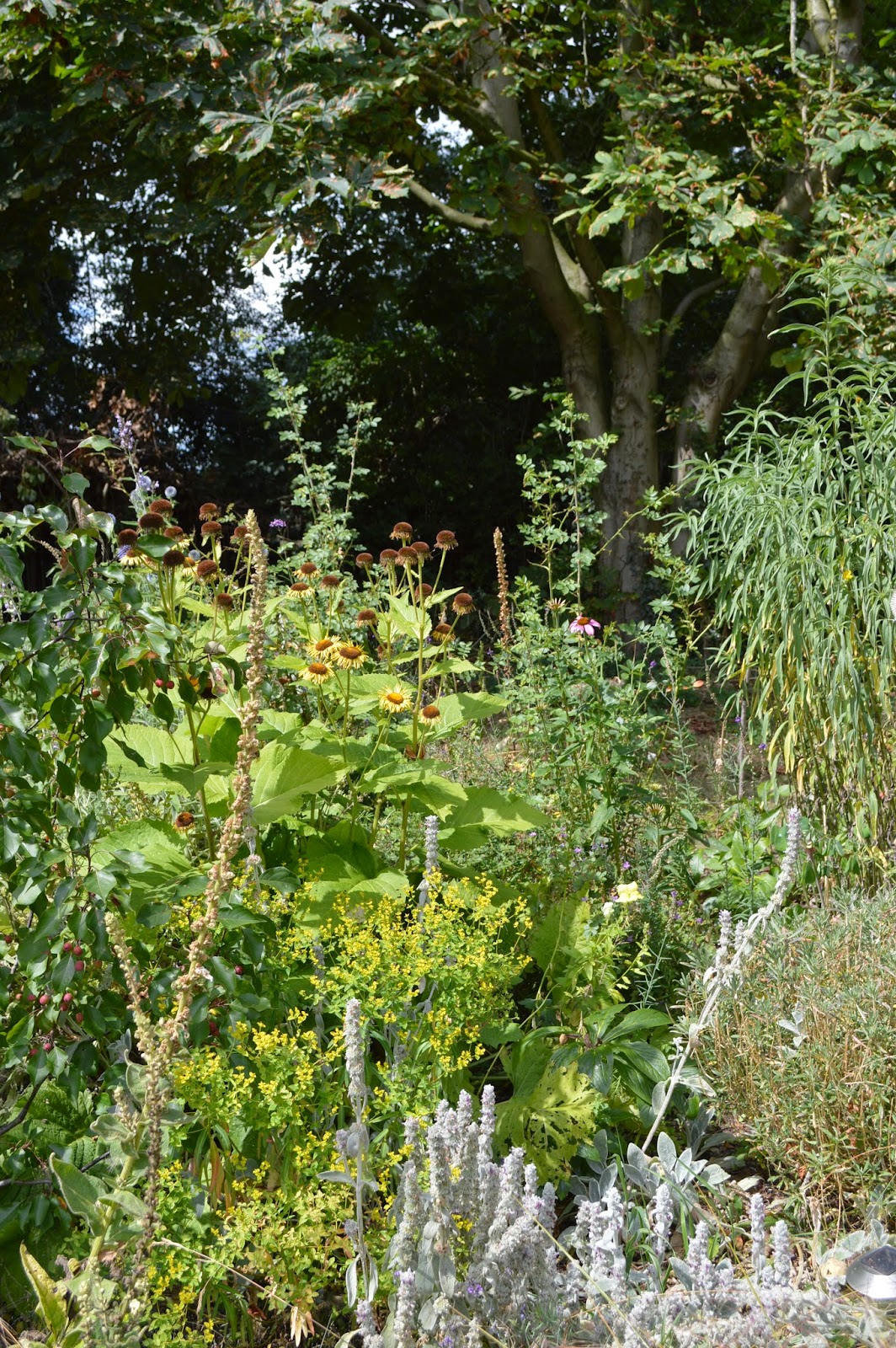 The Woodland Border is filling out very well.  It has taken a year or two to really look established. 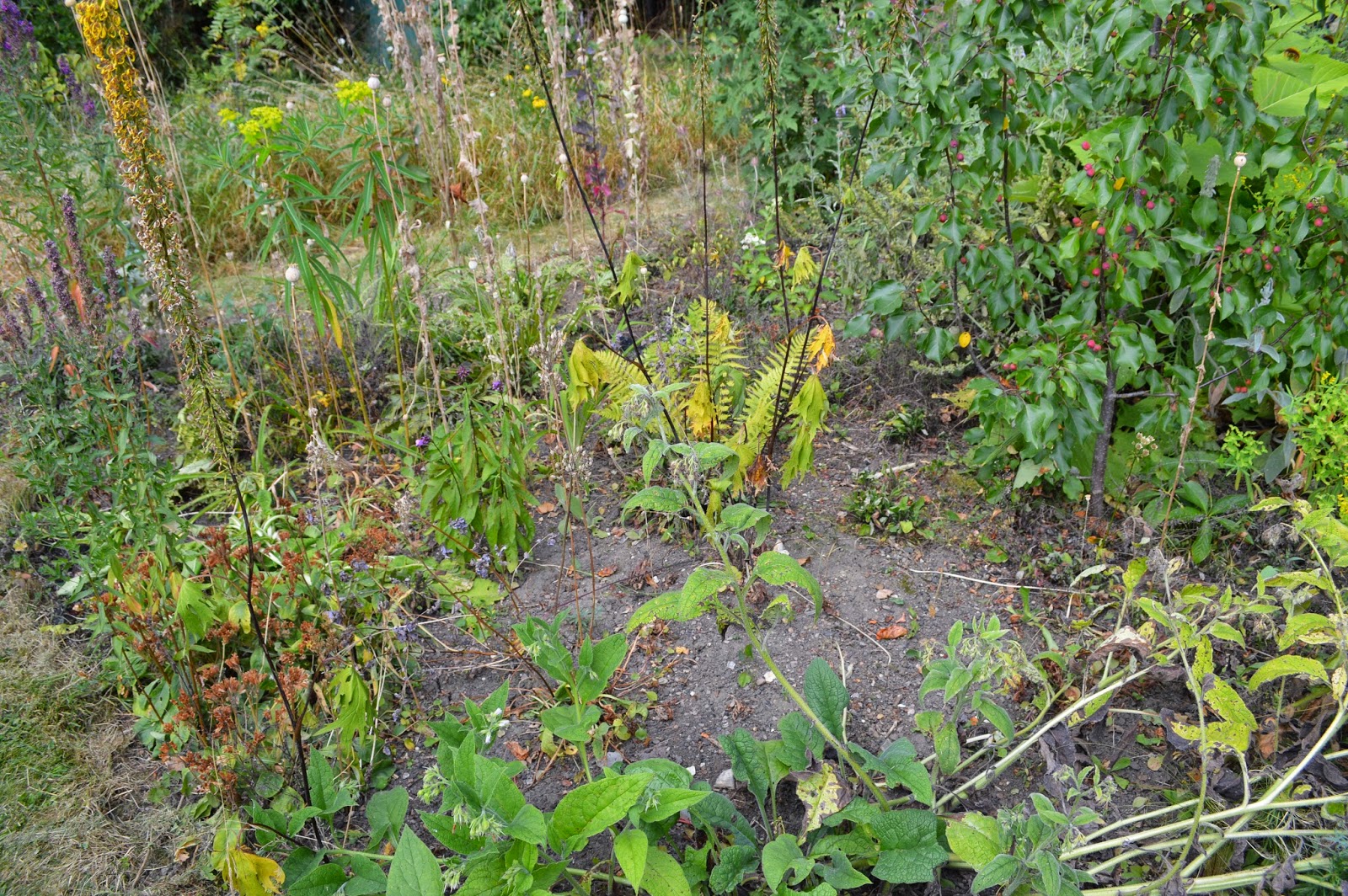 The Bog Garden however, looks dry. 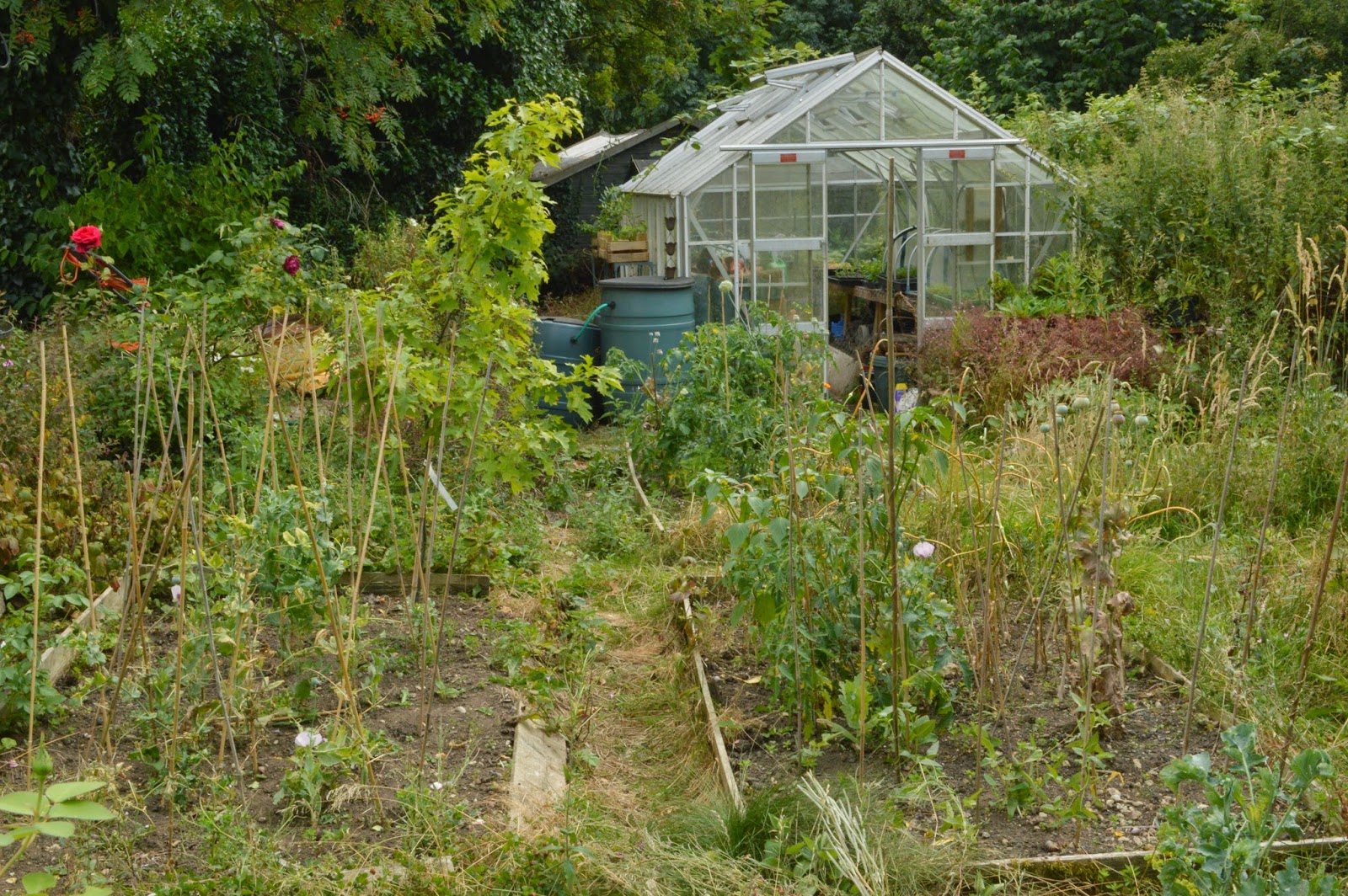 The vegetable beds look full of vegetables and a little full of oak tree.  It may seem odd to have an oak tree in a vegetable bed, but when I bought it the driveway was not plantable in yet and I thought it would last better if planted than if kept in a pot (yes, same thought process as mentioned at the start of this post).  Now I do not want to move it until it goes dormant in Autumn, it is in full leaf and I don't want to upset it. 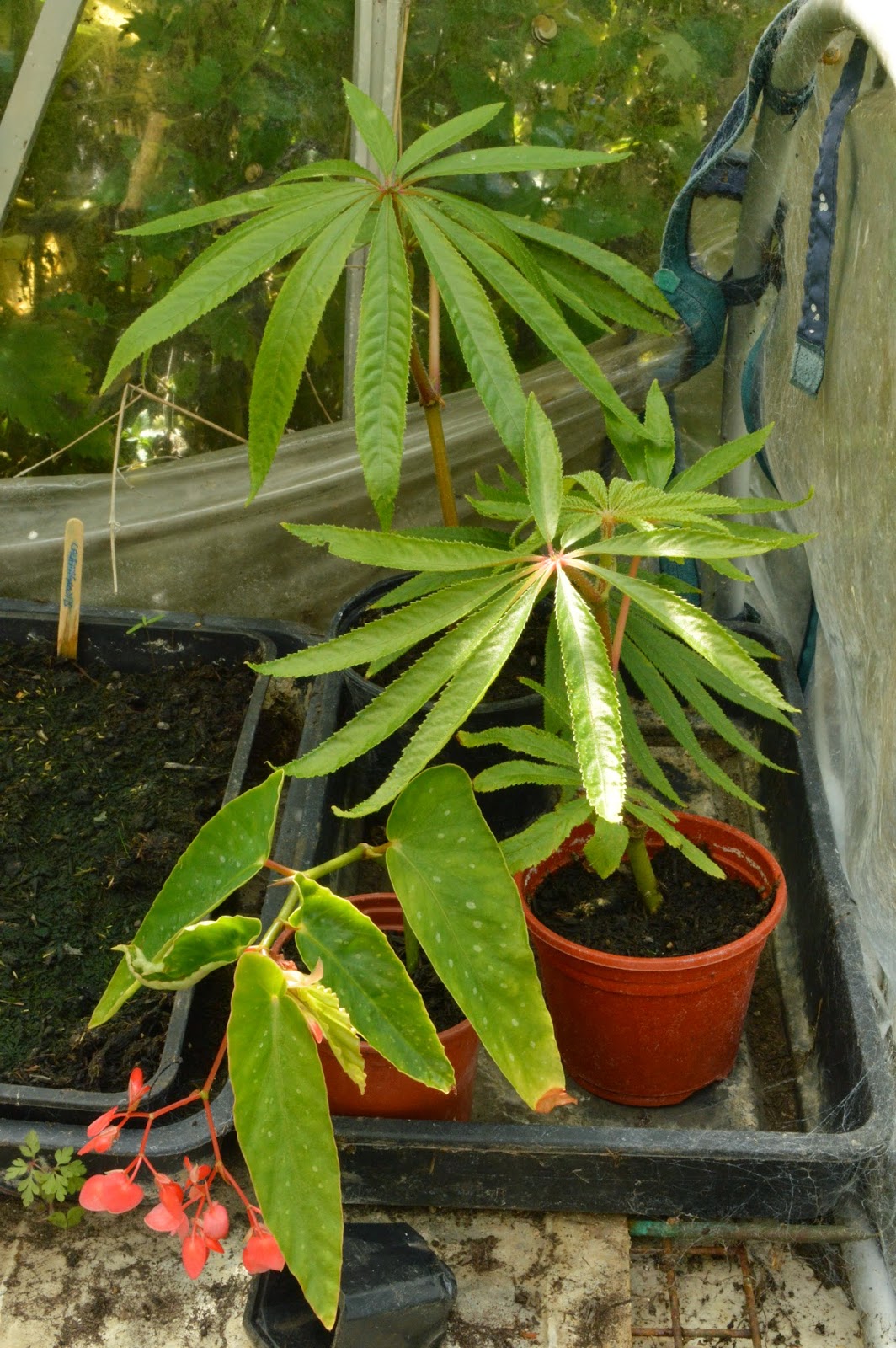 Inside the greenhouse there are begonia cuttings, 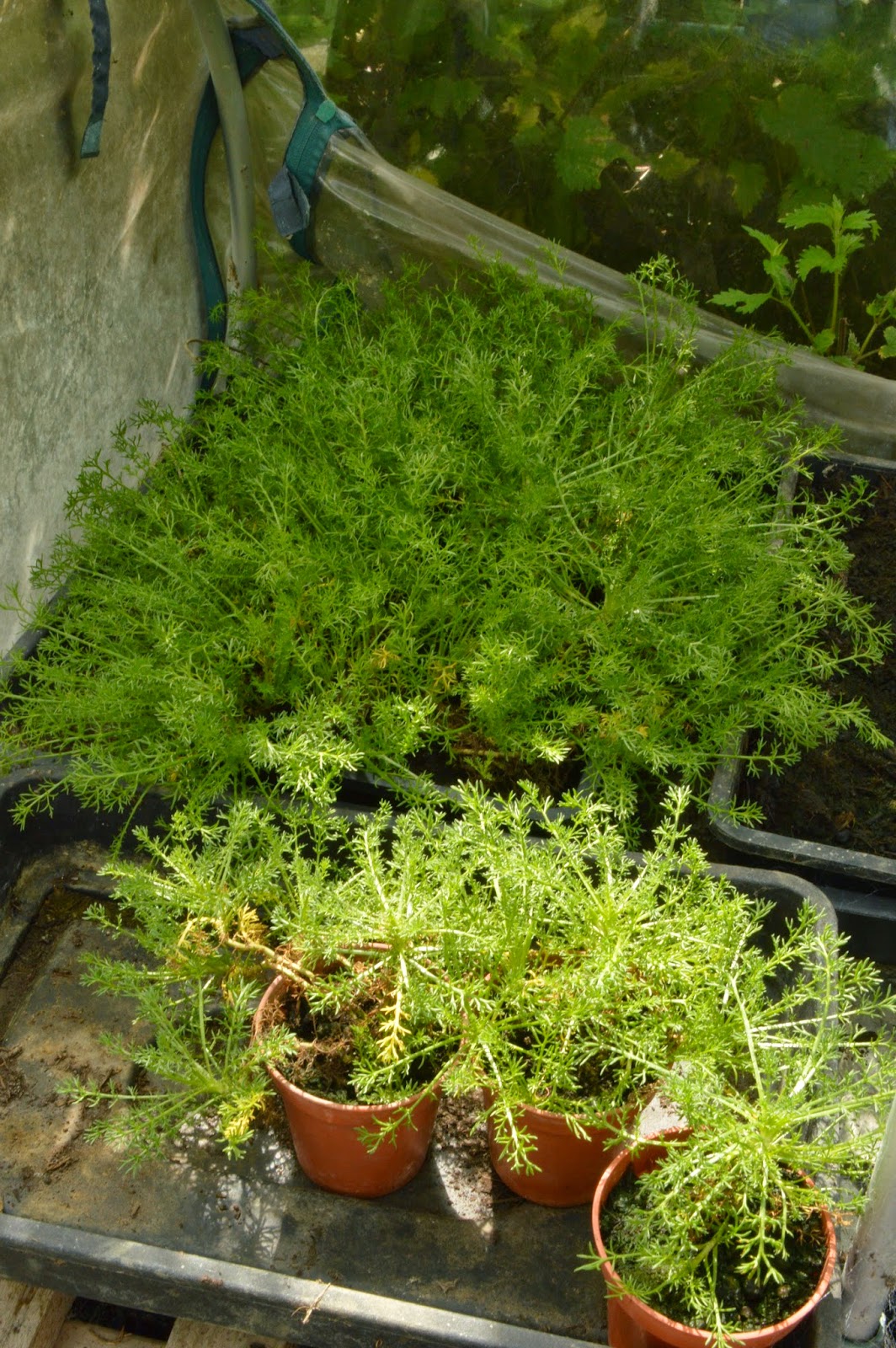 a camomile lawn (in its initial stages) 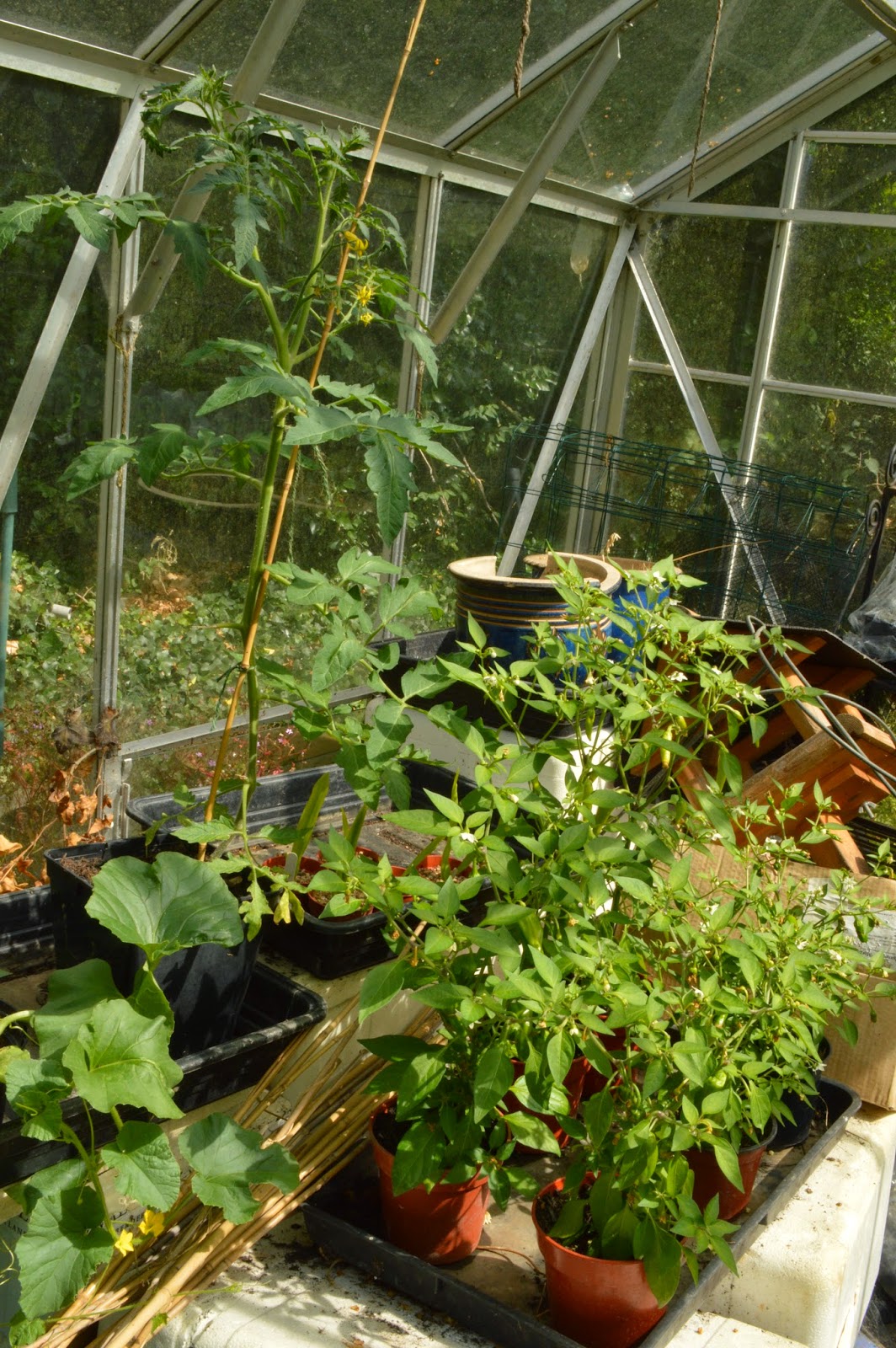 quite a lot of chillies and a Blaby tomato.  There are more Blaby tomatoes planted outside but I wanted to keep one inside just to see which would do best. 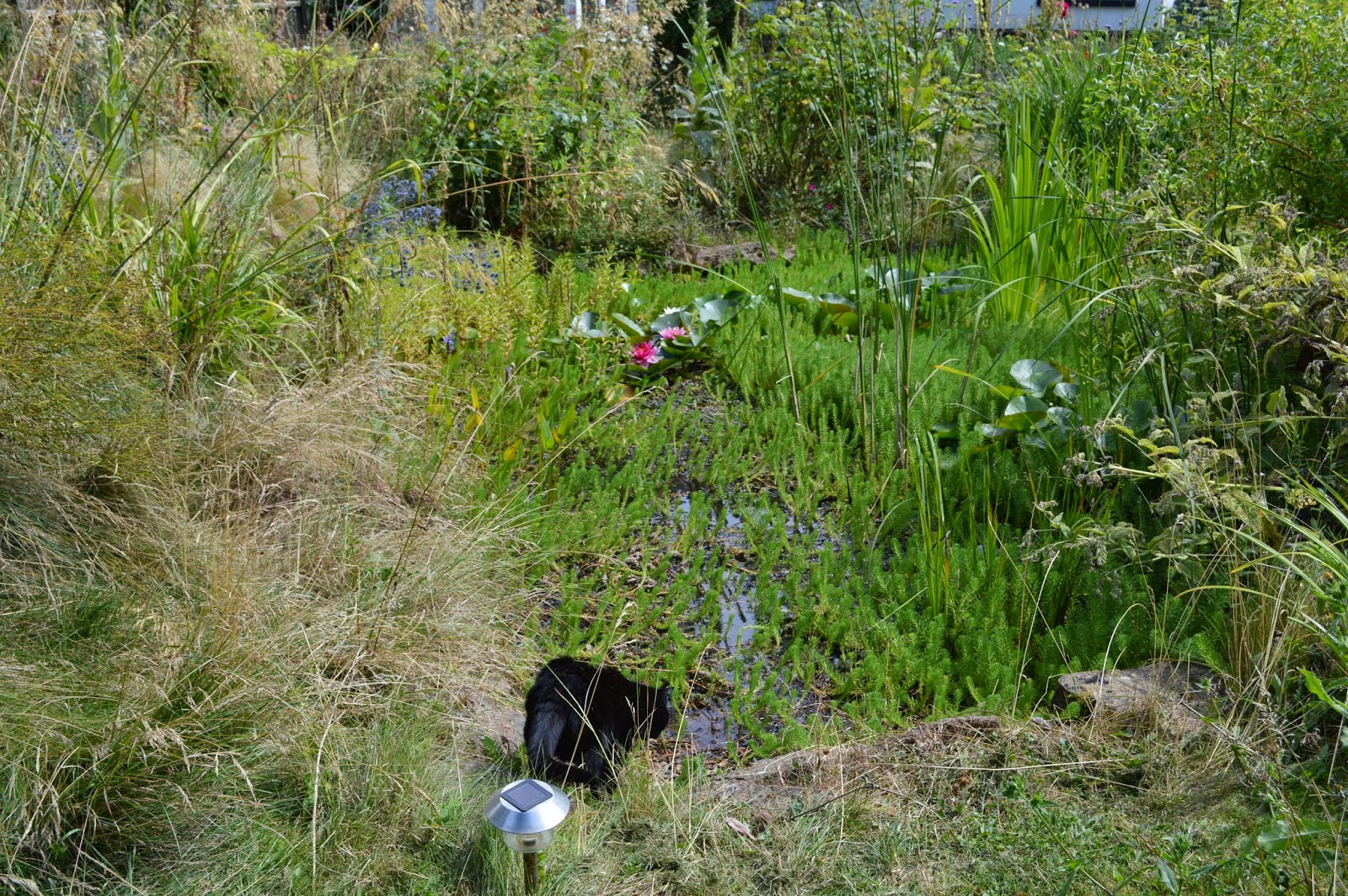 and the pond, well I am now truly ashamed of it, Lawrence is having a drink but most of the water can barely be seen, it will get a good clear out in the Autumn, promise.

Thanks as ever to Helen for hosting this meme.
Knot garden Magnolia Little Gem pond