July 13, 2014
or, more accurately, a visit to Hampton Court Flower Show in the company of the Seven Dwarfs. 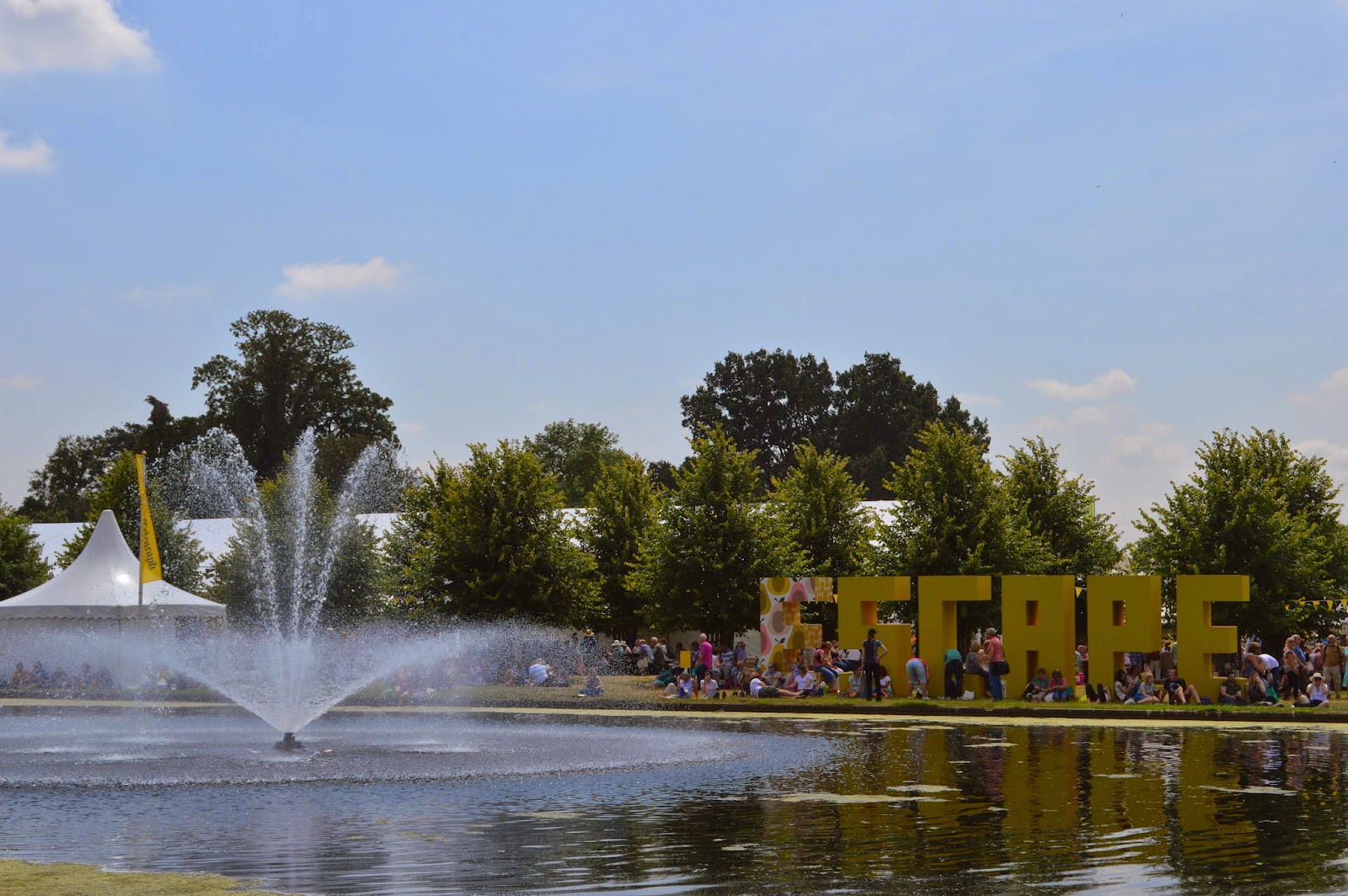 I do not go to Hampton Court Flower Show very often, this was my third visit.  The show often clashes with work commitments and so I usually go to Tatton instead.  This year Tatton clashes with a major work event so I had thought I would only be going to Chelsea.  The opportunity arose for me to go to Hampton and I thought why not.  I could only go on Saturday but I thought that it would be alright.  The drive down there was not too bad until I was six miles away when the traffic stopped and crawled and stopped for over an hour.  By the time I arrived at the show I was very hot and definitely in the company of dwarf no: 1 - Grumpy. 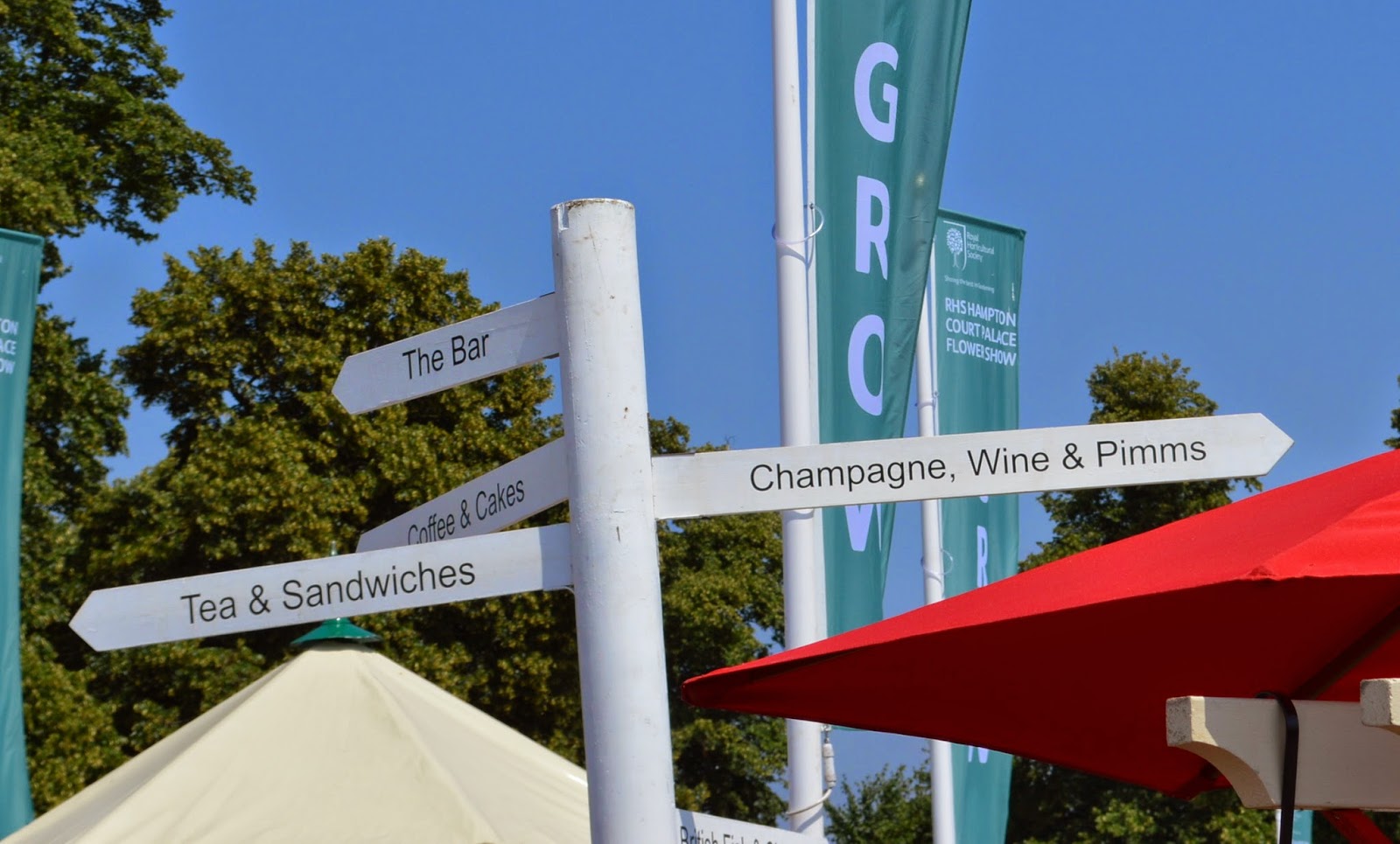 But the signs were good so I thought I would get a cold drink and maybe a sandwich and cool down for a bit before launching into the main site.  It was already a hot day but there was a girl band singing and plenty of chairs so I sat and thought I would relax and calm down a bit. 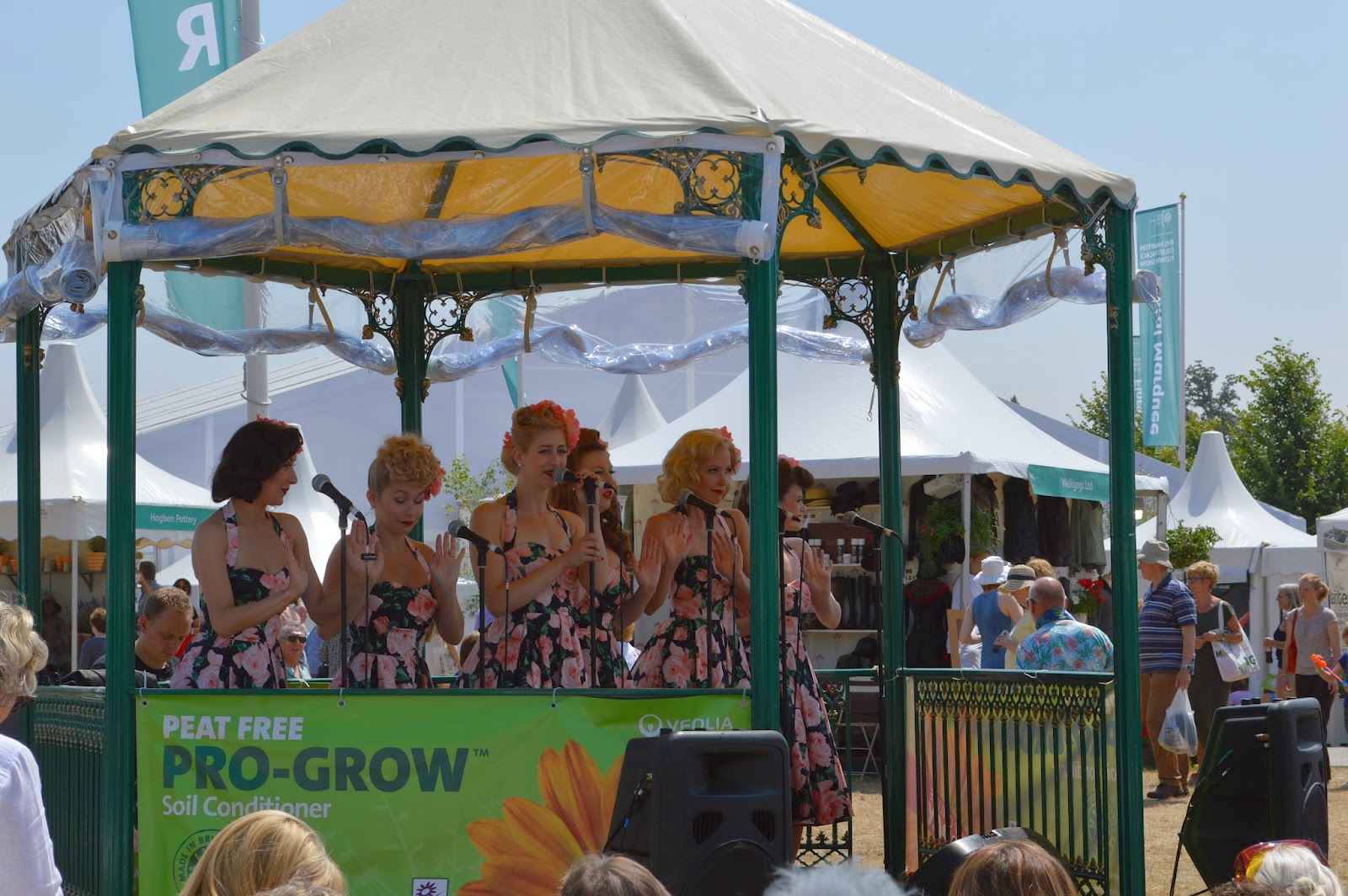 I am afraid, whilst they sang very well, I was not calmed.  I then decided to head for the floral marquee, surely communing with plants would lift my mood? 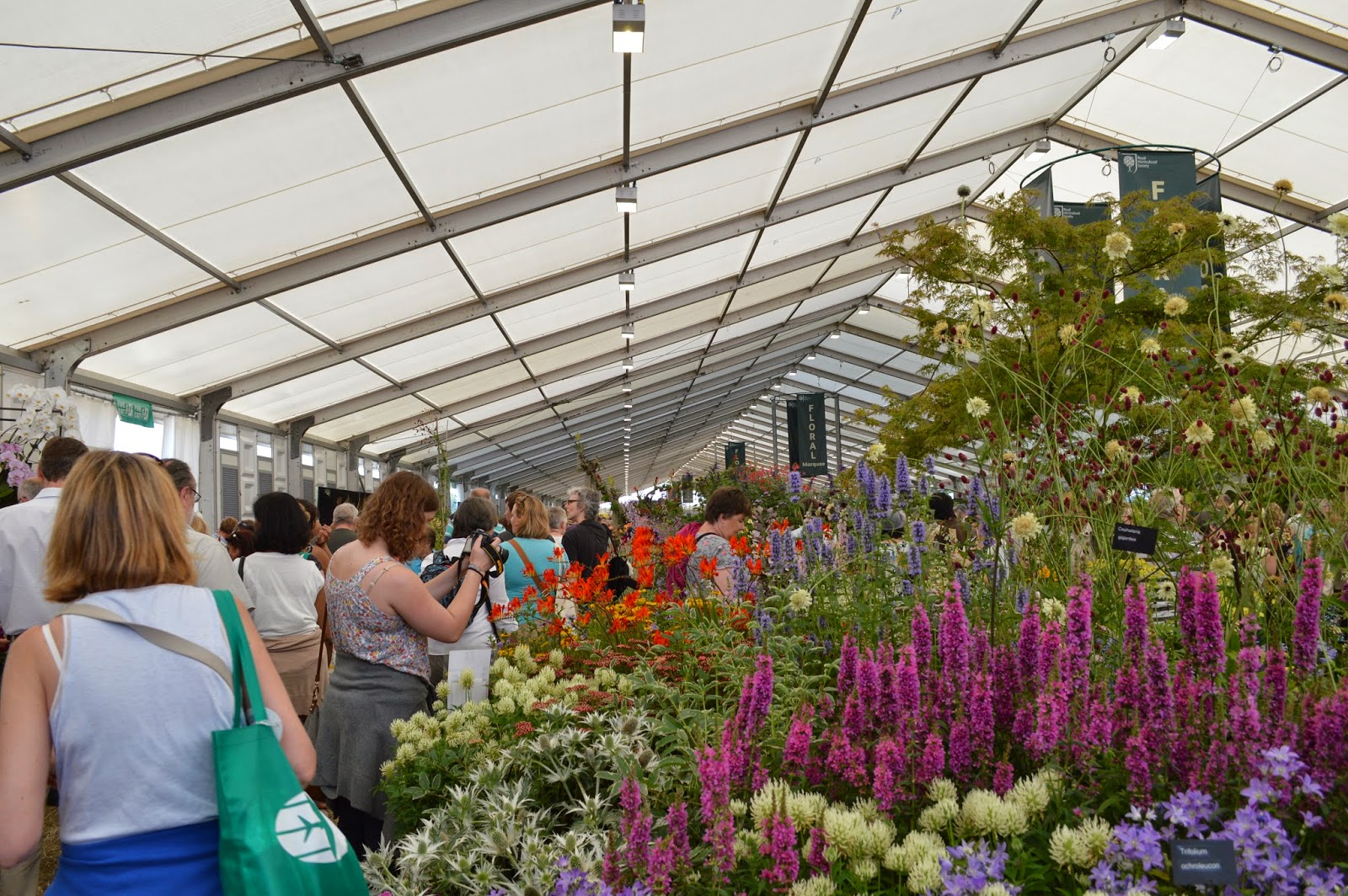 It was mighty crowded and hot in the floral marquee, enter Dwarf no: 2, Dopey, fancy thinking it would be calming!  I began to meander around (getting bashed by trollies and knocked into - Grumpy and Dopey were holding hands and skipping in front of me at this point which in itself is rather irritating).  So I went and had a chat with a nice man about grasses.  I had been having a twitter conversation the evening before about maybe adding some taller grasses to my Prairie Borders and this seemed like destiny playing a hand.  A nice chat later I was a) calmed and b) clutching seeds. 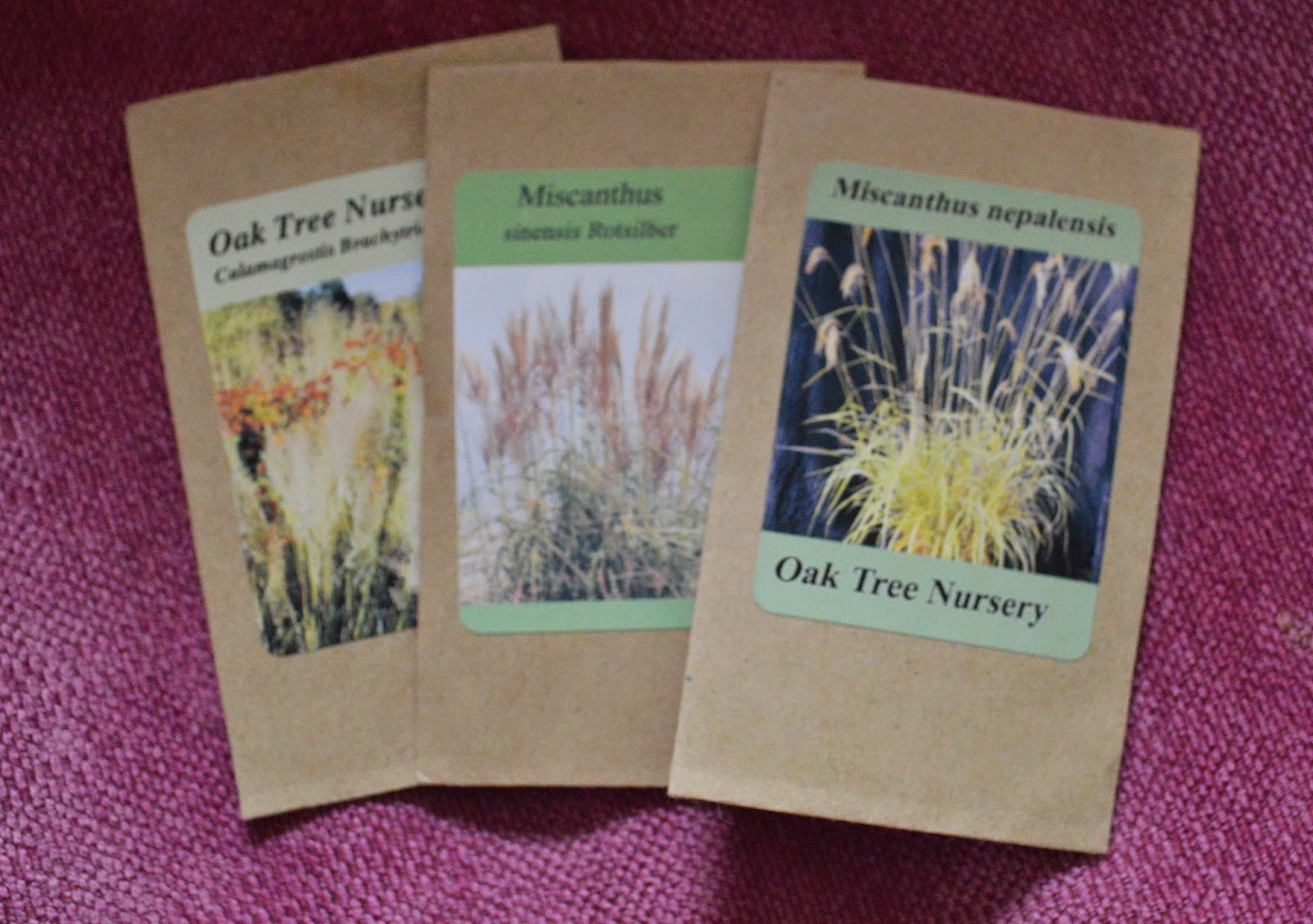 I wandered from this stall straight over to a fuchsia stall where I accidentally bought two plants. 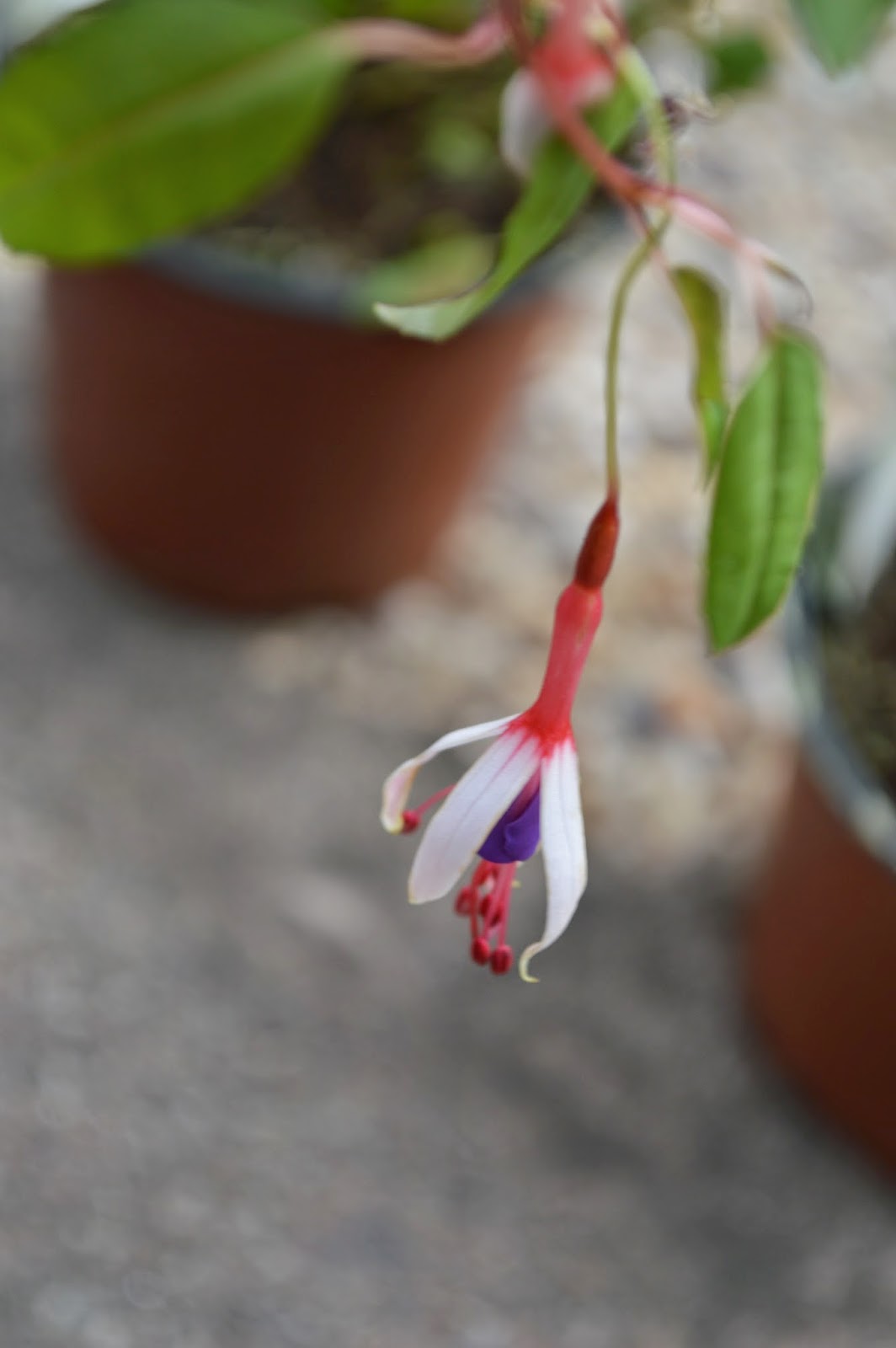 No 1- Lady Bacon, nice and hardy, hardy fuchsias are good and something I have an increasing amount of. 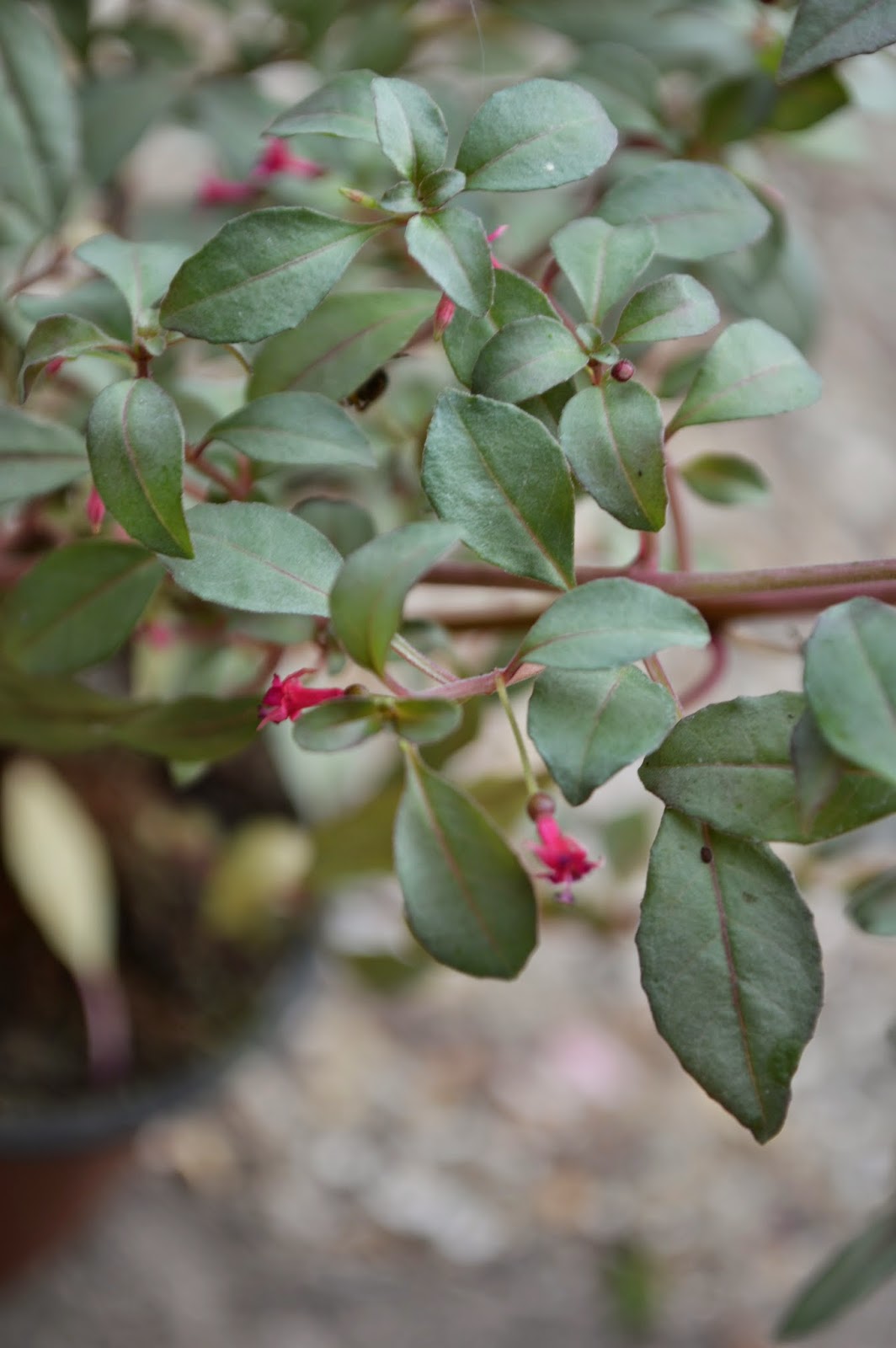 No 2 Marlies de Keijzer this one is a bit tender apparently but I loved the tiny flowers so it will go into a pot so I can bring it inside to over winter.  I will also take contingency cuttings of it just in case I lose the main plant.

Welcome Dwarf No: 3 - Happy, how can one stay grumpy when you have bought some plants?  I decided the time was right to go and find ice-cream.  I found ice-cream remarkably easily, selling ice-cream on a day like this must be the easiest thing in the world, people were (quite literally) just queueing up for them.  The grounds were littered by people trying to find shade from the heat of the day.  I found a seat by the grand canal and thought calming thoughts, which were interrupted by a one-man band.  Yes, cymbals/drums - the lot.  I was still a bit headachey from the drive at this point so he was not hugely welcome.  I moved away quickly so that hopefully my grumpiness would be undetected.  A couple of paracetemol later (yes, you're ahead of me - hello Doc), and I was on my way again. 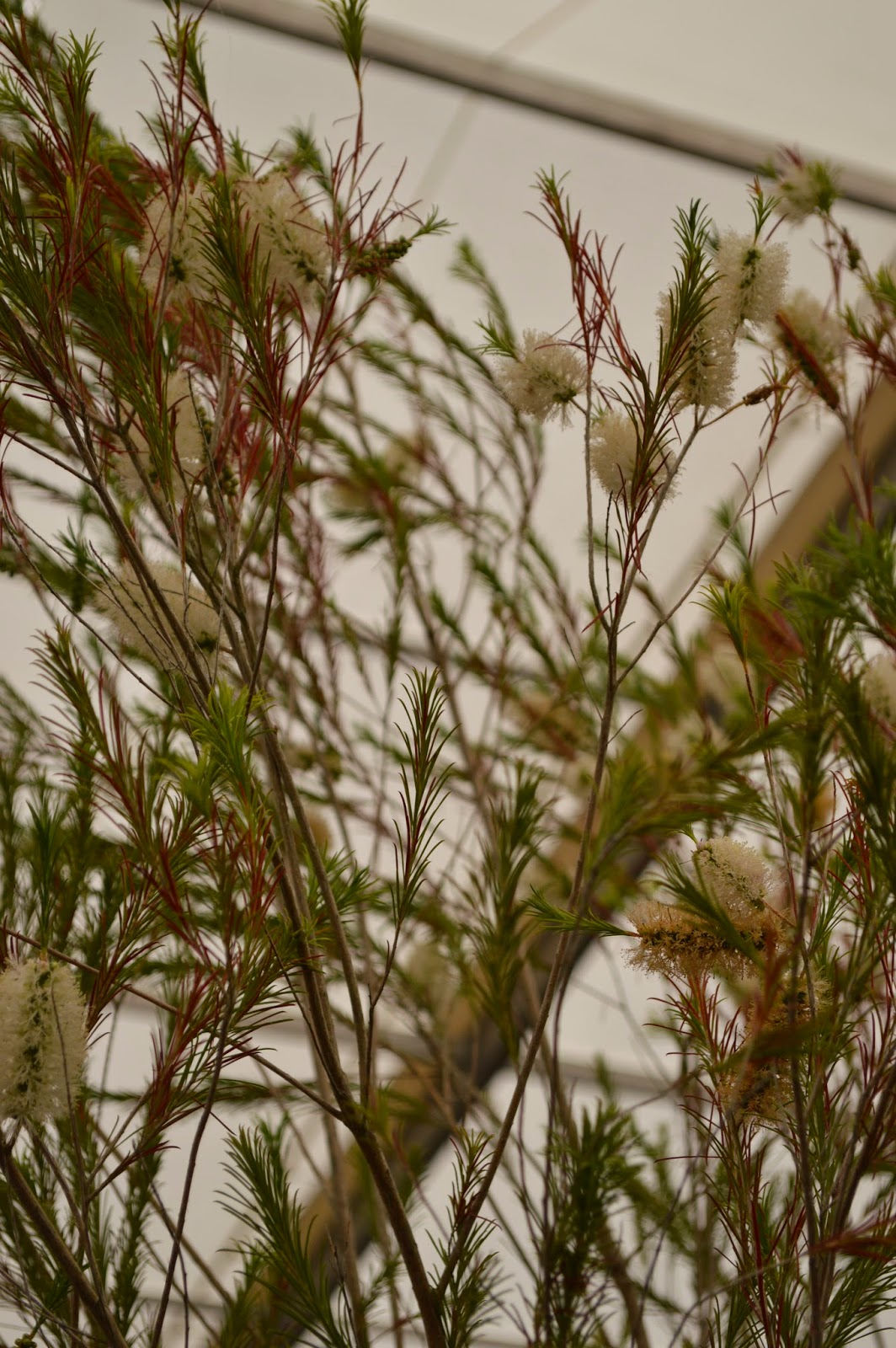 Despite the heat I do like the floral marquee, there are plants from all over the globe in there and of course many are for sale. 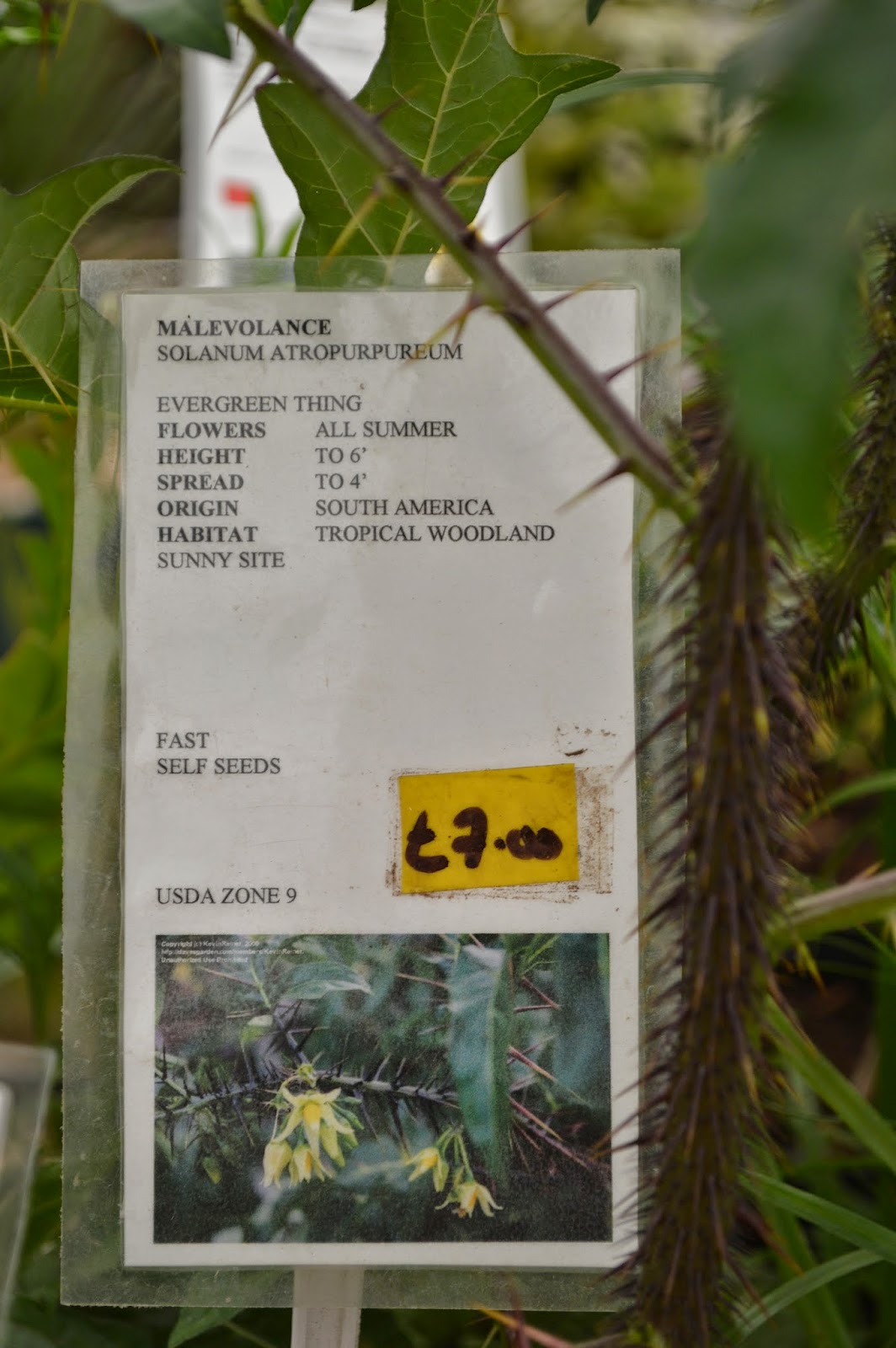 I nearly bought this plant, very nearly, just because it is an 'evergreen thing', that is my kind of labelling. 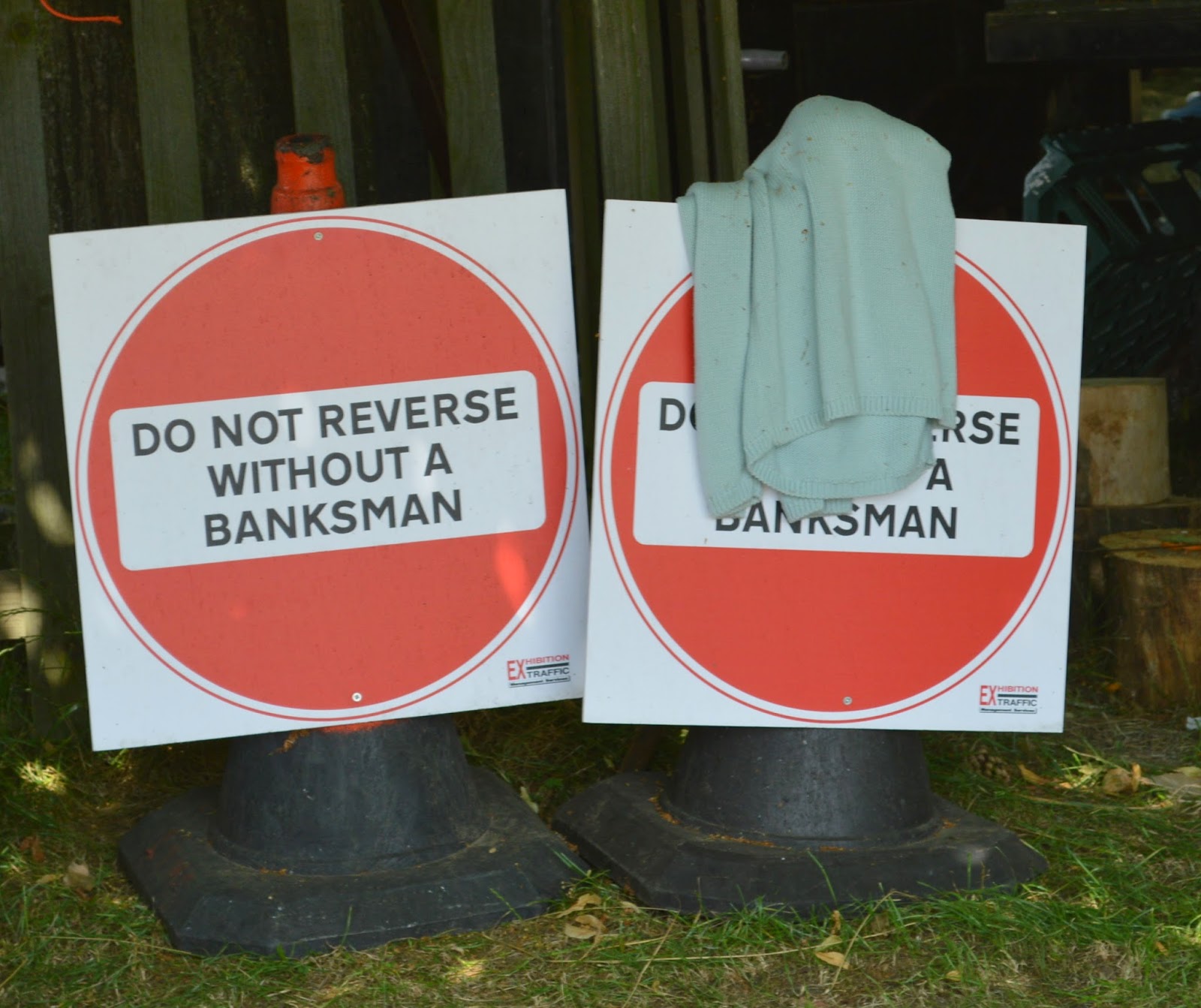 Did I mention it was crowded?  Some people were forgetting their basic Highway Code and stopping with signalling leading to small bumps and lots of sorries.  These signs were much needed. 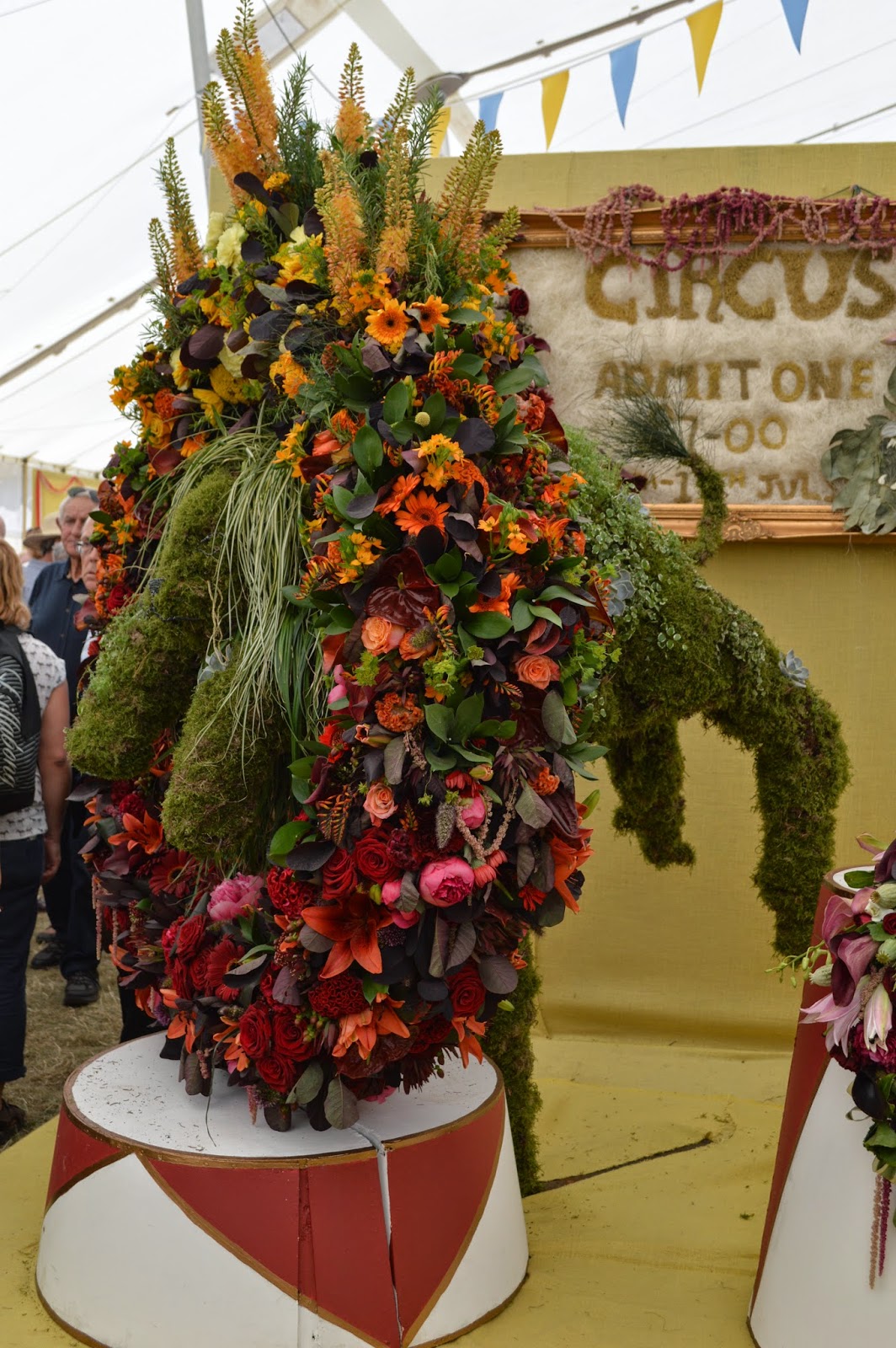 My wanderings continued, I went into the Rose and floristry tent as I wanted to buy some roses from David Austin.  This was duly completed so I stood for a while in front of this, there isn't a dwarf called Confused, but if there was he would have been standing by the side of me at this point. 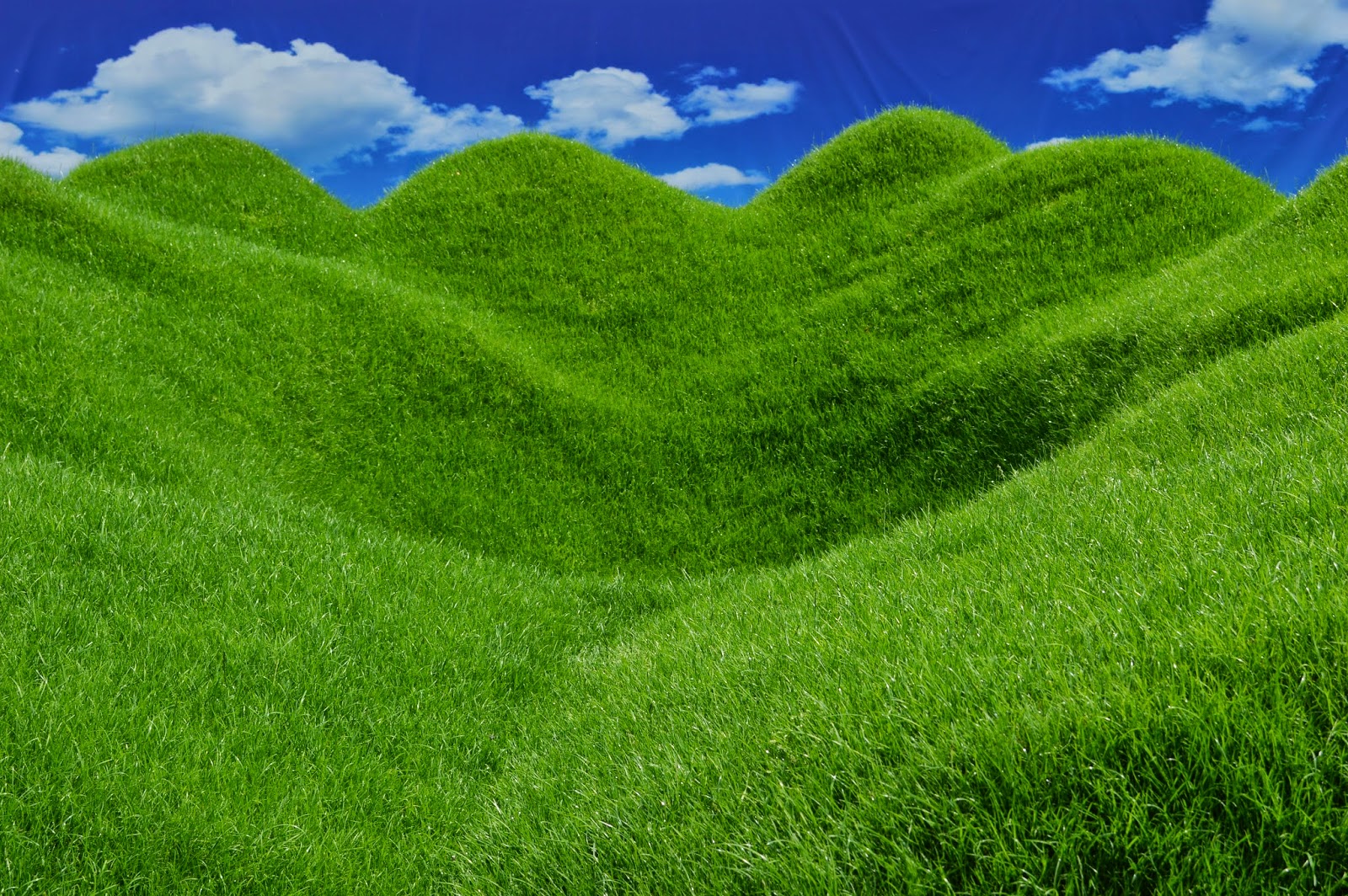 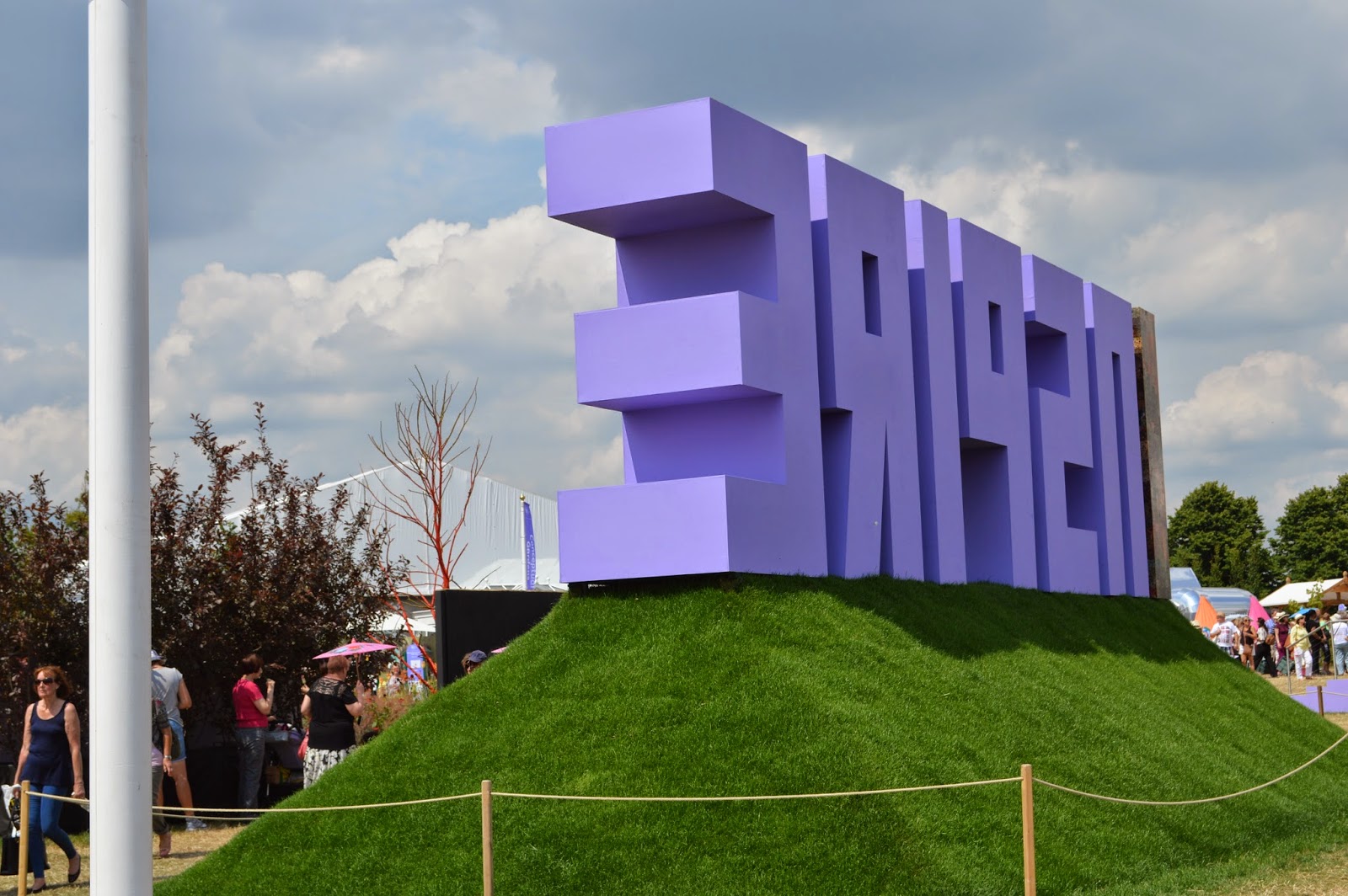 The hotter the day got the more I got tired (Hello Sleepy) and less able to work out what the big letters were saying to me.  I liked the big letters, but they kept being backwards.

At the end of a long hot day (did I mention it was hot?) I decided it was time to leave, but not before being entranced by the ingenuity of these two ladies.  Forget your knotted hankies a la Monty Python, these ladies had real style and panache: 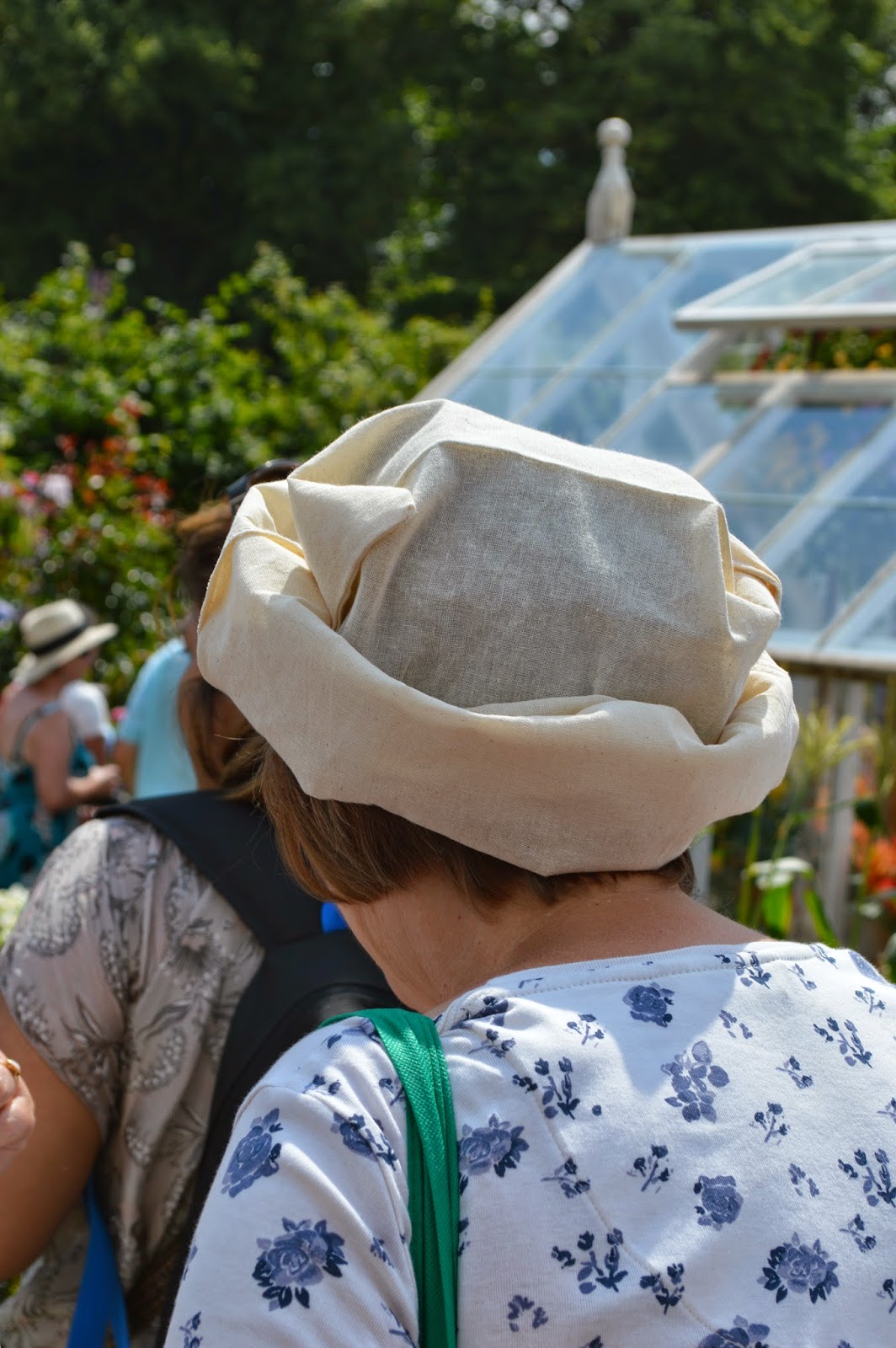 This one won for simplicity and function, 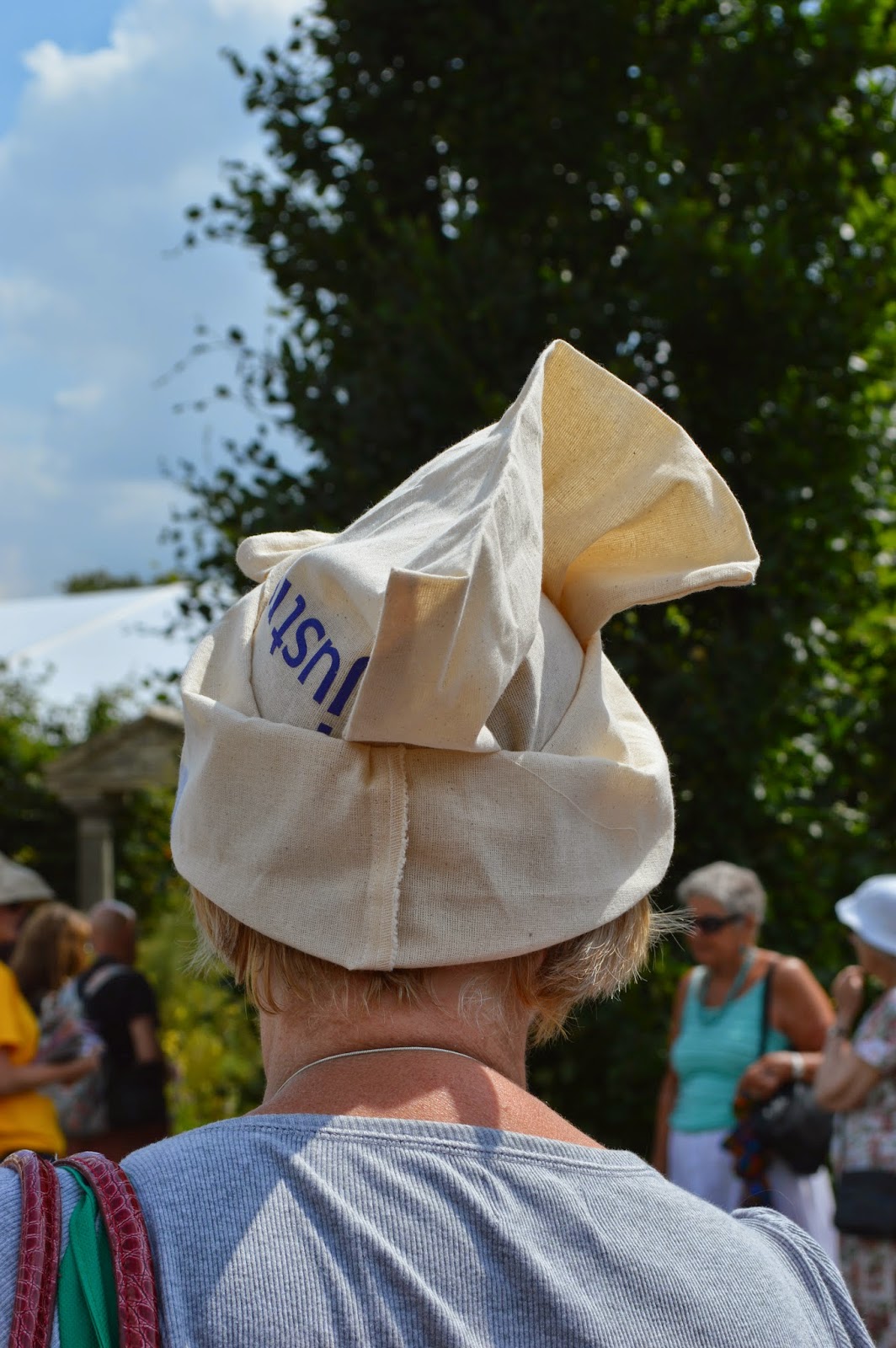 but this one was just fantastic, hessian bag folding at its best.  It was also far more crowd friendly than the masses of parasols being used.  (Yes I was grumpy about them too).

Did I miss some dwarfs?  Well Sneezy is always with me as I have hayfever, but Bashful rarely appears on a day that involves Grumpy, they are a bit mutually exclusive.  I think most of the time their lesser known, yet frequent visitor, Sweary was with me, though thankfully the drive home was much better and shorter in time.

I did actually have a nice time really, but once the grumpiness has descended it does tend to rather cloud a day.  I am very pleased with my purchases and really looking forward to my roses arriving in  the Autumn.  I even thought I would like to visit again, but maybe if I am lucky I will be able to go in the week next time.

I did enjoy the gardens, so I shall write separately about them, without any trace of grumpiness (promise).

(The Seven Dwarfs as named here are trademarked by Disney)