A trio of tools - product review

July 27, 2014
I was contacted the other day to see if I would like to review some tools by easyshed.co.uk  I thought about this for a millisecond and said yes.  I was offered a choice what I might like to try and as ever when I am asked to review things I thought about what I use, what I might need and also what I might have never used but would be interested in seeing what they were like. 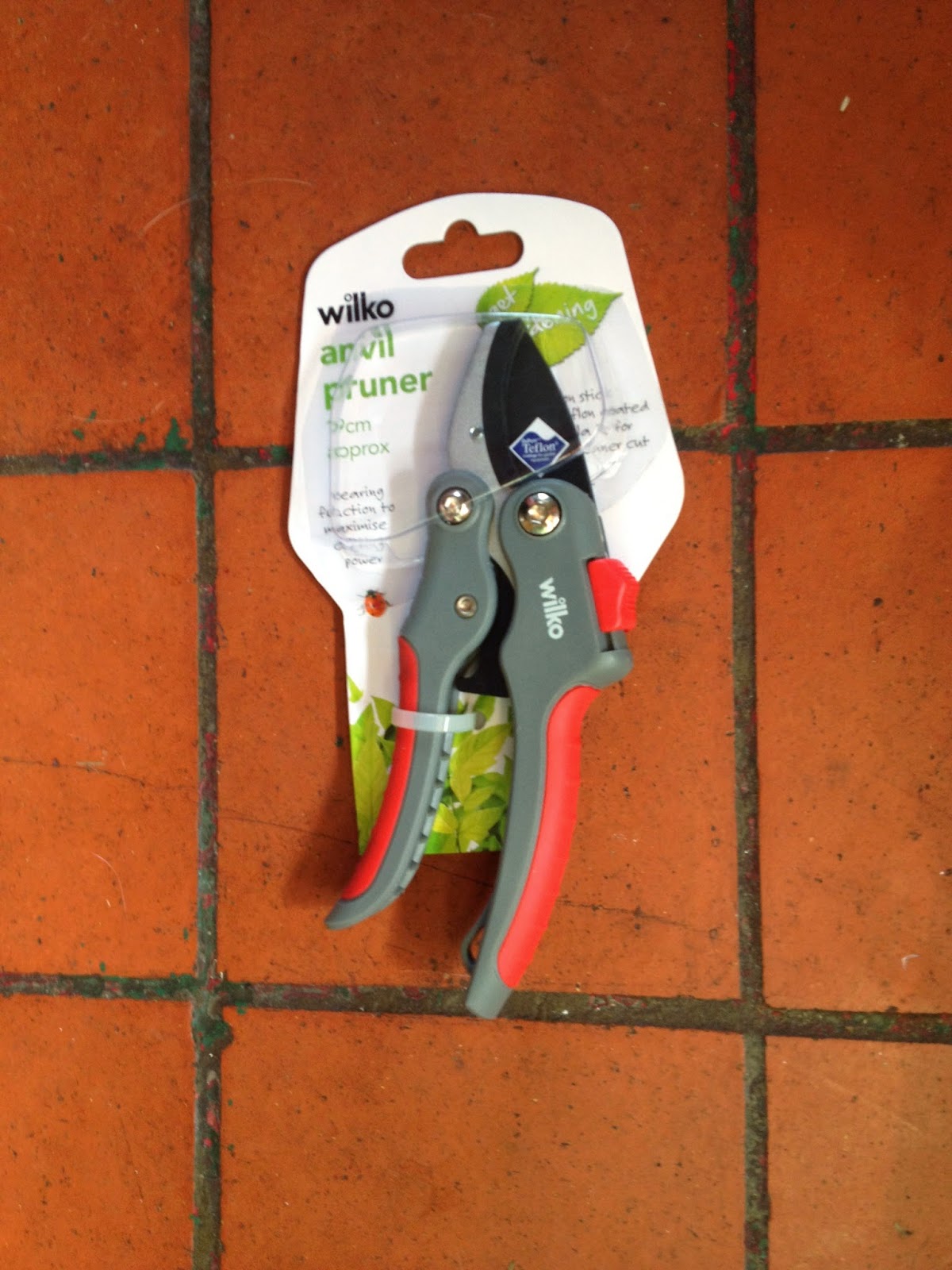 The first item I chose where the ‘Wilco Get Gardening Anvil Pruner’ that retail at £5*.  I already had a pair of secateurs that I will admit cost considerably more than that.  I have had them for many years, I think about fifteen and they are my constant companion.  They are also in need of a service as some idiot (me) used them as wire cutters and quite frankly they were not happy about this.  I had been thinking about getting another pair and so this seemed an ideal opportunity.  I will also tell you that for £5 I did not have high expectations of what I would receive.  These anvil pruners are however rather fab.  They are lightweight but I would not describe them as flimsy.  I think if you have poor mobility in your hands they could be very easy to use and they were certainly comfortable to hold and use.  The blades are Teflon coated to make them non-stick.  This works a treat, they cut very easily and I was not pulling bits of dead rose out of them, the rose heads just fell away.  I do like to test things properly so I have been using them every day this week.  It is my daily routine to get home and wander around the garden dead-heading this and that so I have got used to this secateurs very quickly.  I have even started to use the blade lock automatically now with one hand, which at first I struggled with as my hands automatically were trying to work as if with my usual secateurs.  So the verdict, well I like these secateurs a lot.  They are easy to use and do what they say they will do, for £5 they are an absolute bargain.  I cannot say they will last me fifteen years, but who knows?  If I avoid cutting wire with them they might keep me going quite a while. 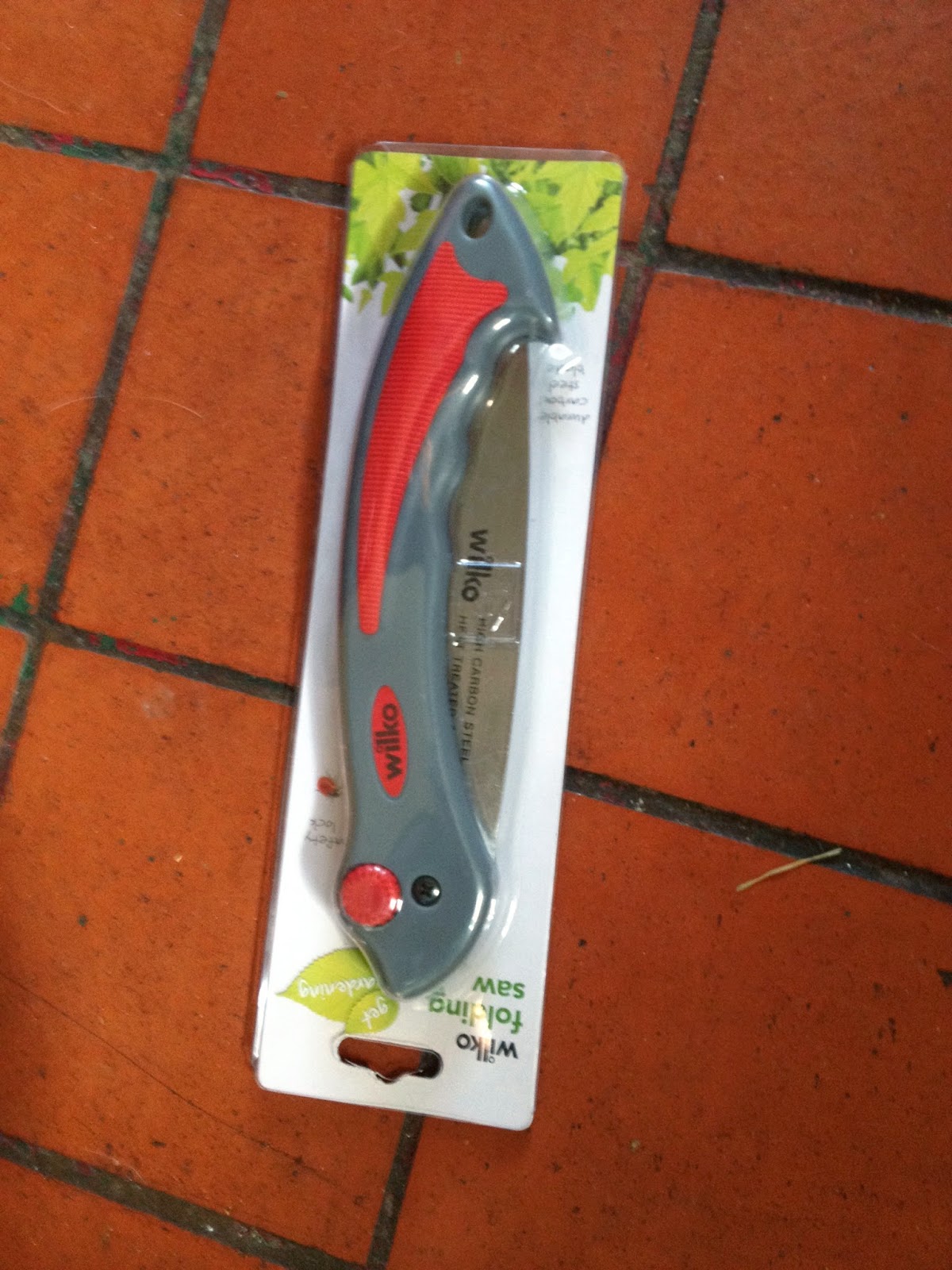 Next I chose the Wilko Folding Pruning Saw.  Friends who follow me on Twitter may remember some weeks back I lost a pruning saw.  Mid-prune I put it down somewhere and to this day it has not turned up.  I think it might have been composted though I have hunted through the prunings of that day more than once.  So a saw with less green handles seems a good thing to me and this one is grey and red.  It retails at £4*, again not the most costly you will buy but also again certainly not flimsy.  Now it is not really pruning time so that almost presented a bit of a challenge in terms of testing this saw, but some of you may also remember that I have recently started work on clearing my driveway.  The driveway is lined with totally neglected trees, several of which are self-sown.  I have already removed some tree-lets that were just too many and some lower branches, but the trees still need further tidying.  So I went out yesterday and had a good (hot though) session at removing more unwanted tree-lets.  Some of the stems were a good couple of inches in diameter so not an easy test for this little saw but it coped beautifully.  Best of all I did not lose it, a definite result.  Would I recommend this saw – oh yes, it is extremely good value for money. 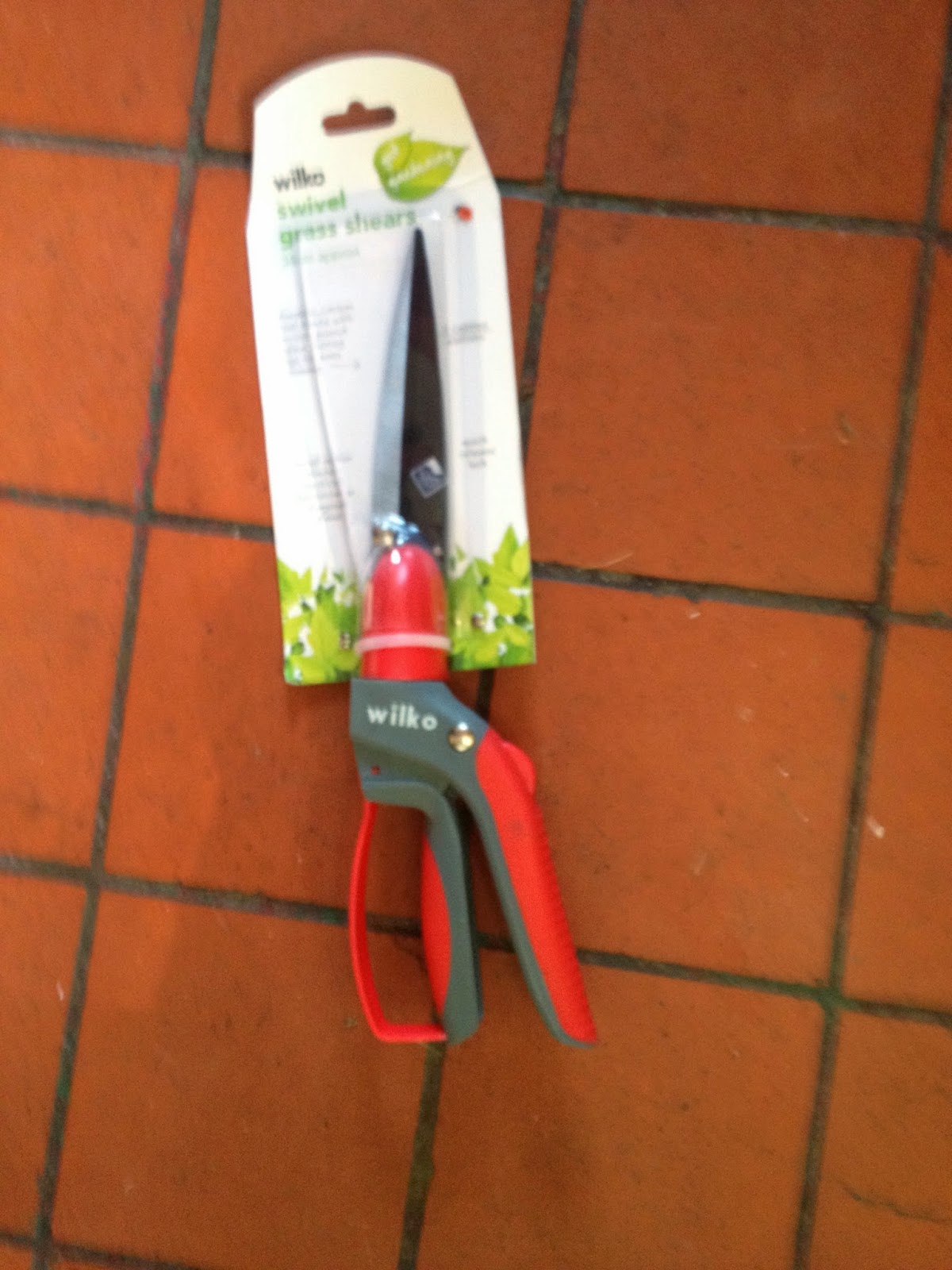 Finally I chose the Wilko Swivel Grass Shears, also retailing at £4*.  I have not tried this type of shears before and I was interested in seeing how they would fare.  I have some ‘proper’ topiary shears for the Knot Garden, but to be frank they are a bit of a pain.  The blades spring open too often and I find them hard to control.  Last time I pruned the Knot Garden I gave up with them and used ordinary hedge shears, they did the job well but were a bit large and unwieldy really.  The first test for these Grass shears was to trim the lavender edging to the front path.  It had got a bit out of hand and the first flush of lavender flower is done now.  I find that a prune now makes them re-flower and also keeps them in good shape.  These little shears worked beautifully.  They are light and fit my hands well, I had soon made a good impression on the lavender.

Next I tried them on the box hedging in the Knot Garden, again, they worked well.  They were easy to control and cut through the box with ease.  I really really like them to prune box with, they did the job incredibly well.  I started to get that ‘Edward Scissorhands’ moment, you know the one, where you wander around snipping at the air thinking what can I prune next?

What’s that you say?  They are grass shears – there is a clue in the name what they are meant to be for?  Heavens-to-Betsy!  tools often have to multi-task in my world and a grass shear here is a box shear there (however a pair of secateurs are not a wire cutter!).  Anyhoo, I wandered into the back garden to where the Four Sisters are growing and tried the shears out on some grass.  They cut the grass around the base of the shrubs really well, it was so much quicker than faffing around getting the strimmer out.  For small quick tidy-up jobs these are ideal.  I also used them at different angles, making the most of the swivel feature.  They swivelled, I tell you they swivelled fantastically.  They swivelled so well I went back into the front garden and trimmed the box hedging a little well, swivelling to and fro. These are a great tool and I now wonder how I managed without them.

The final verdict:  If you want some inexpensive but good tools these are worth a try.  They will not break the bank but will do what they say they do.

*prices taken from the Wilko website, correct at the time of viewing, no promises as to what they will remain at
anvil pruners folding saw grass shears product review