May 04, 2014
I have a couple of plants that I prize very highly, its not that they were particularly expensive (they were not) but it is that they are particularly tricky for me to grow.  Others may find growing them a breeze, but I have struggled to keep them alive in the past.  They therefore have my particular attention and I fully admit to checking them every day, every single day I go in the garden I go and see what they are doing.

Case 1 - the Amicia zygomeris.  I first spotted this plant at Barnsley House many years ago and fell in love with it.  The weird pea-like flowers entranced me and I had to get one.  So I did, and whilst it did fairly well in its first year it promptly died over the Winter.  These are not easy plants to find and so also not the cheapest so it took a while before I saw one again that I thought I would try again with.  I finally found one at a plant fair a couple of years ago and it was duly purchased, and coddled, and generally fussed over. 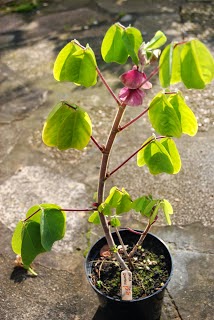 It wasn't the largest plant ever, but it made it through the first winter which was really quite a hard winter.  I mulched it in the hope it would give some protection and I tell myself that it did.  As the next winter approached I took a cutting from it as a contingency, the cutting took and both made it through the winter, this is good, when the cutting is big enough I will plant it out and then I will have two (hopefully).  As it disappears down into nothing over the winter I felt I needed to mark out where it was.  I also wanted to put a bit of a barrier as the fox nearly dug it up the other week in an effort to bury more bread.  (no I don't know why the fox buries bread in my garden). 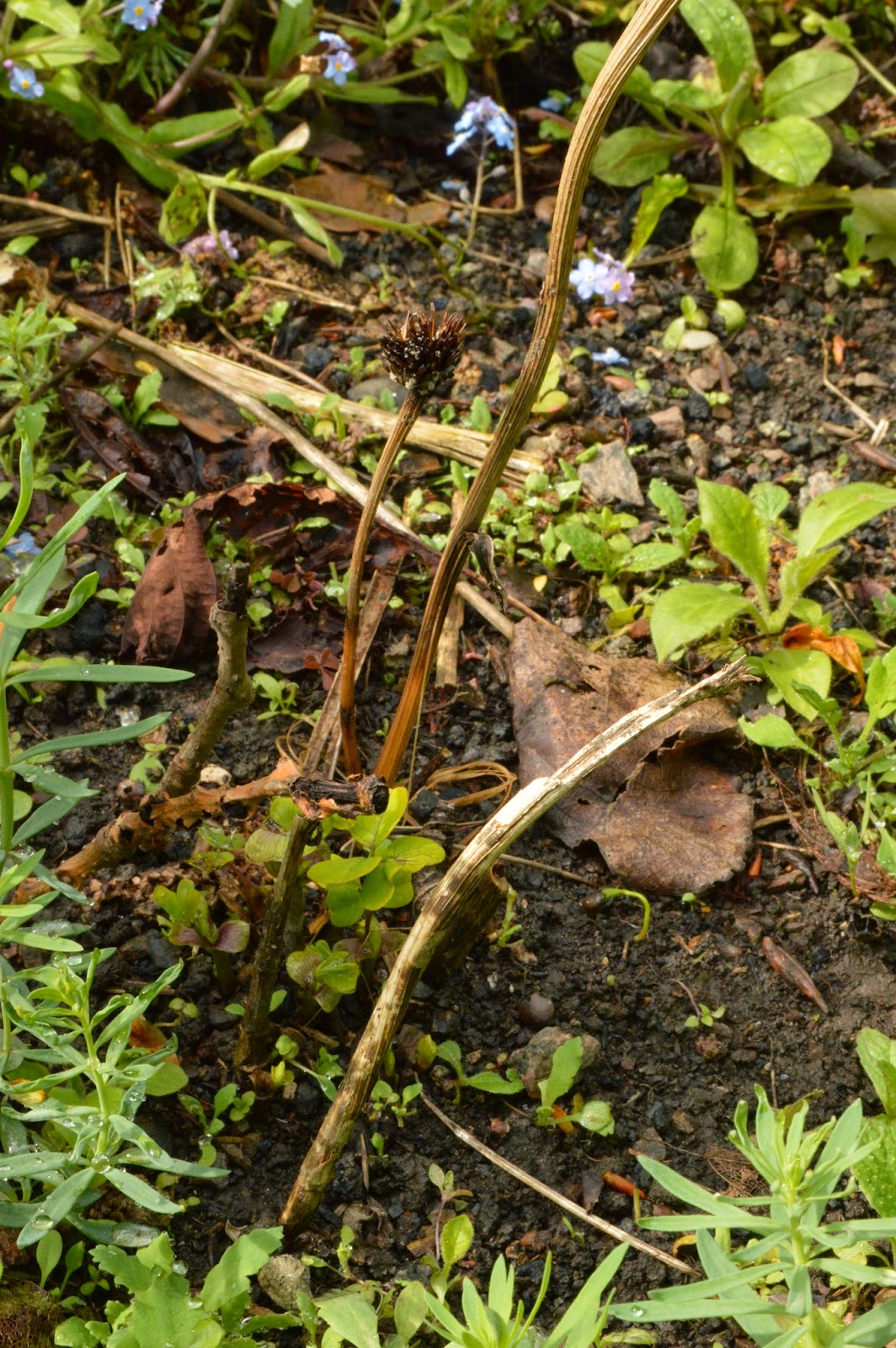 So I have pushed a ring of sticks around it in order to mark out where it is.  It is starting to grow quite well and the recent frosts thankfully did not harm it.  It is looking positive for this year.

I have written previously about how much I like trilliums but also how I am not good at growing them.  I recently took the plunge and bought some trillium seeds, which apparently can take over a year to germinate so I am not holding my breath with them.  I also accidently bought a trillium the other day.  So into the garden it has gone, complete with little stick enclosure so I do not tread on it. 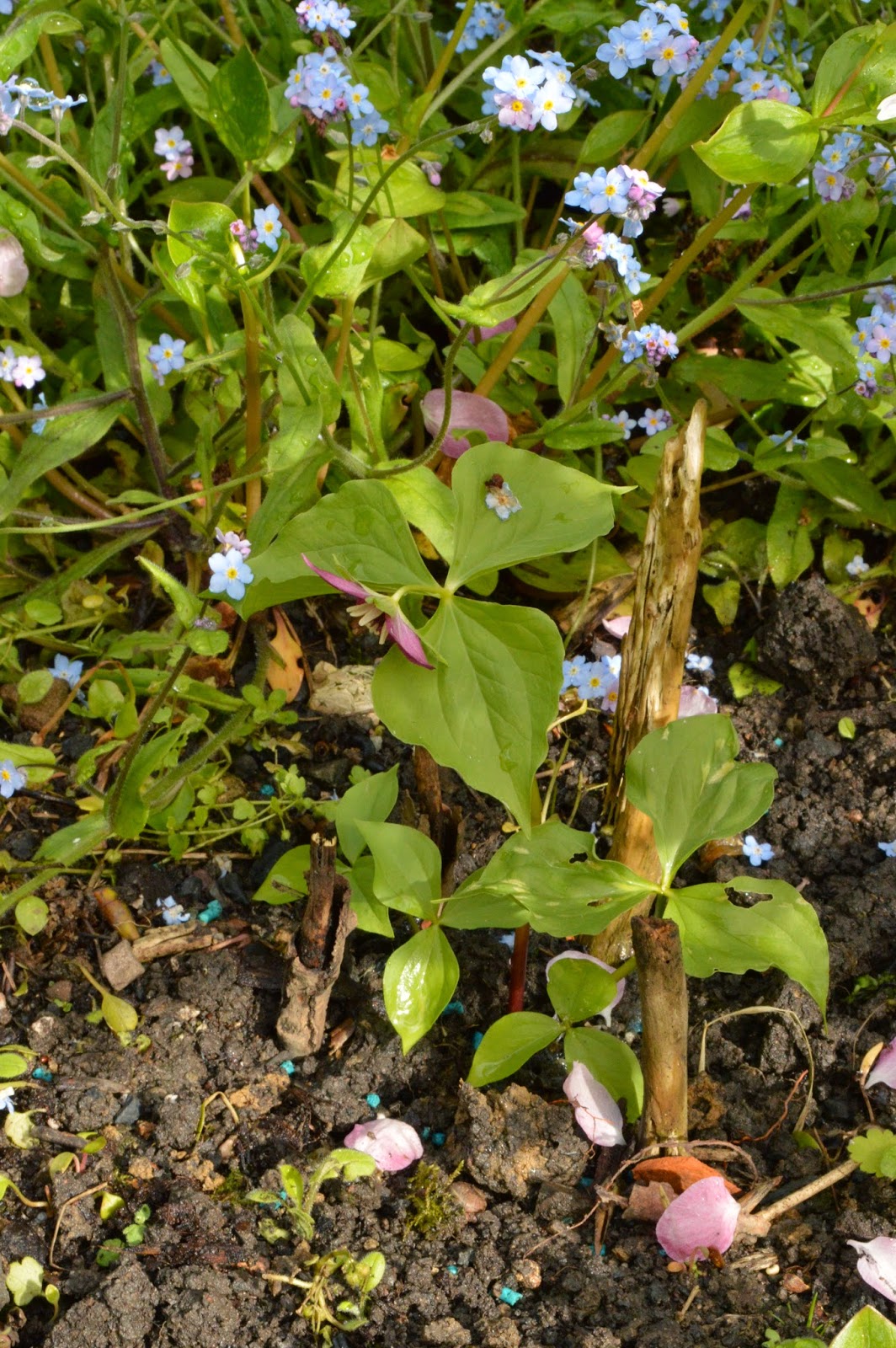 I also confess to sprinkling slug pellets (organic wildlife friendly, slug unfriendly ones) as I am desperate not to lose it.

In my mind I feel like I have created little wood-henges around them.  In centuries to come the fragments of these enclosures will be found and the future equivalent of Tony Robinson will ponder on their meaning.  I am hoping they think it is some sort of a temple; but this is not a temple to any god, the temples in my gardens are for plants.