May 31, 2014
May has been a bit May-ish really, quite warm at times and also rather rainy.  This has resulted in huge amounts of growth, the garden is looking very Billy Bouffant.

As I have now admitted to having a neglected driveway, I thought I would do a quick update on how it looks now. 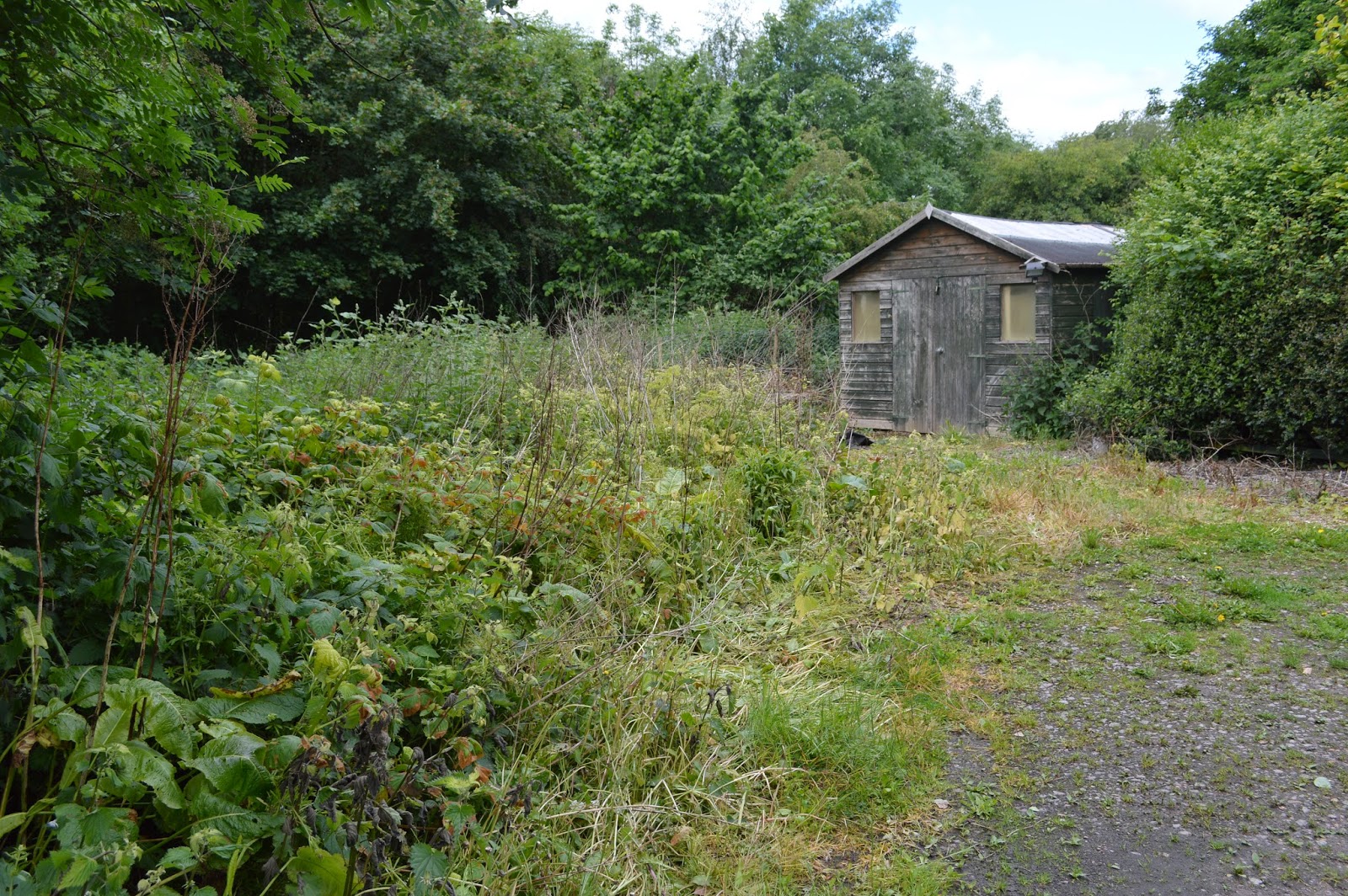 Well, it looks much the same, you might detect a slight yellowing as the glyphosate starts to kill the nettles and brambles that are my side of the invisible fence that is there really.  Yes I know it is dreadful stuff to use, but needs must sometimes. 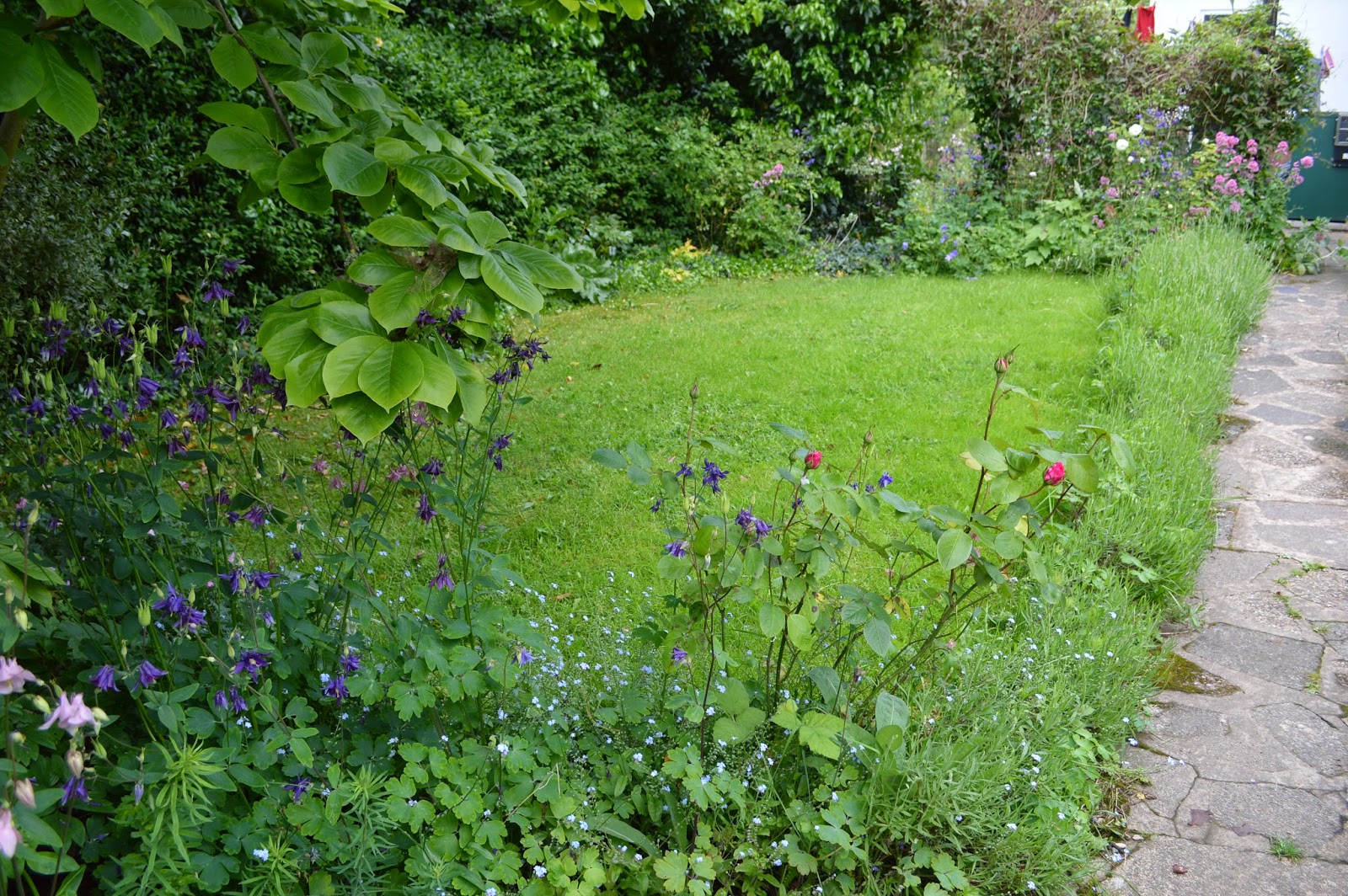 Going into the front garden the side lawn is looking rather good.  The edge of lavender is on the verge of flowering and the roses and self-sown aquilegias are coming on well. 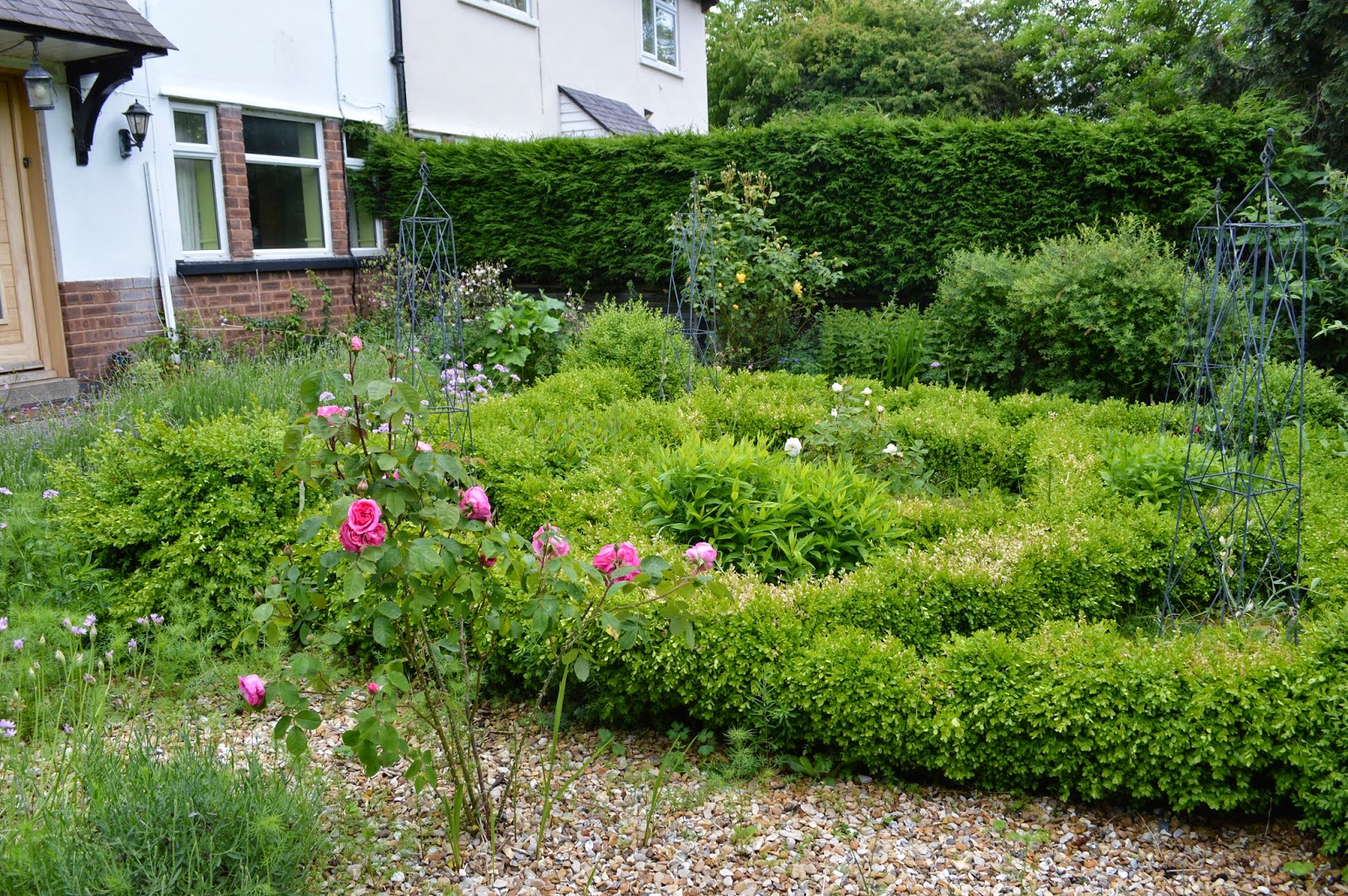 The Knot Garden is recovering from the late frost and in serious need of a cut!  But it is not Derby Day so it has to wait a little longer, rules are rules. 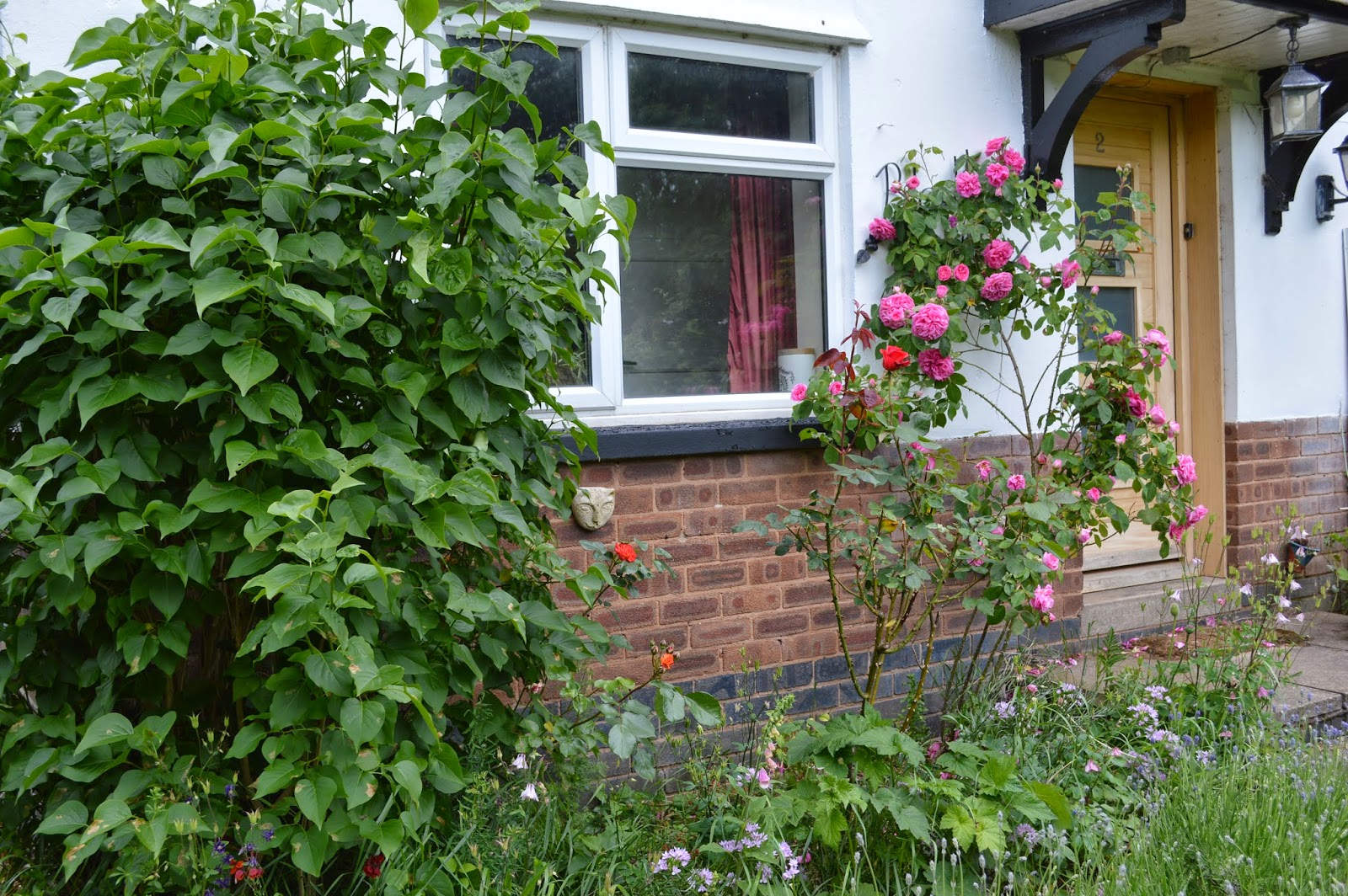 The lilac did not flower this year, I must have pruned out the flowering growth last year.  The climbing Rosa Gertrude Jekyll by the front door is just a delight, the scent from it is wonderful and it has grown fantastically well this year. 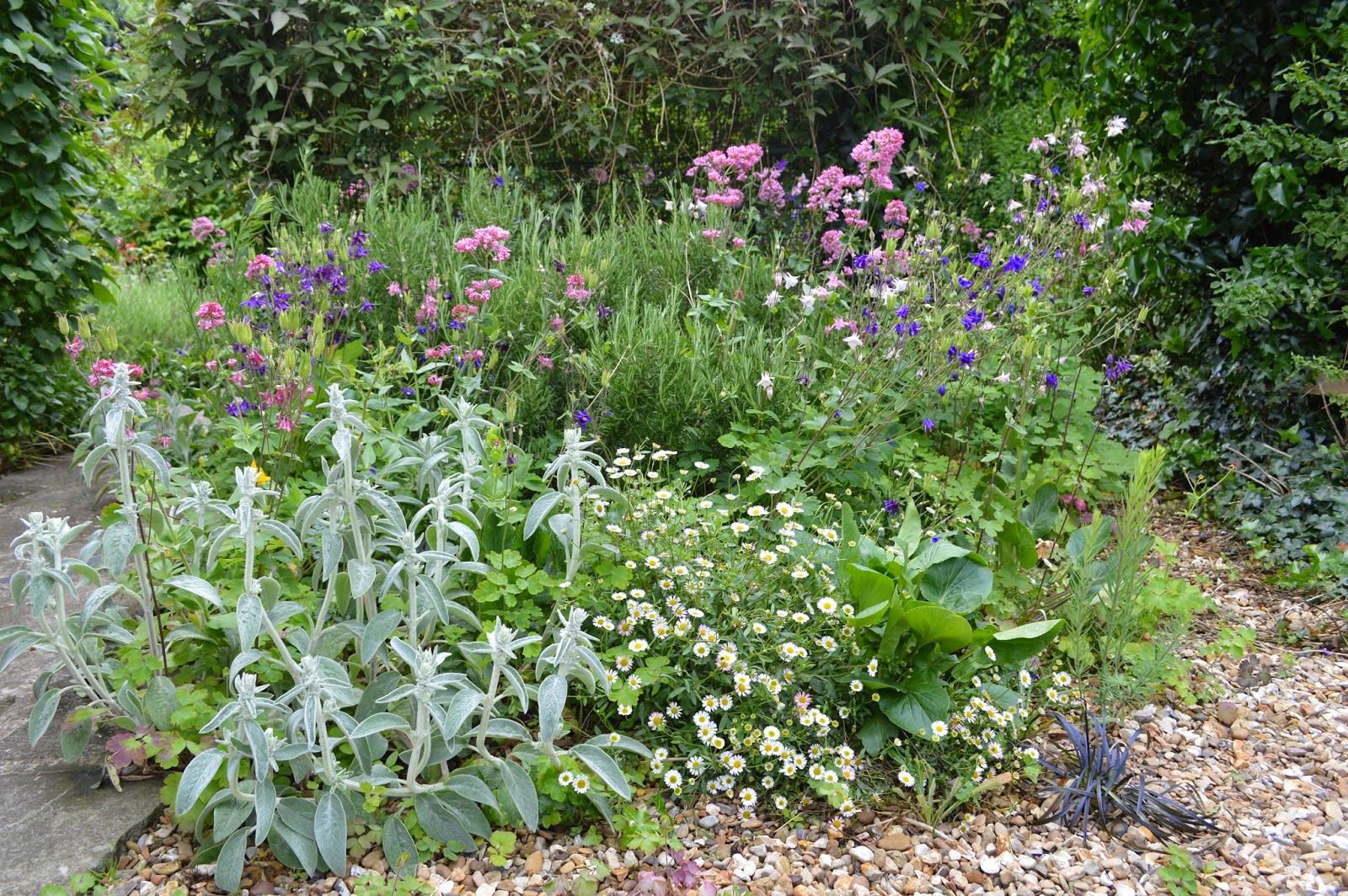 The Gravel Garden is looking quite good too.  A lot of it is self-sown against a backdrop of rosemary, it is a nice little patch now. 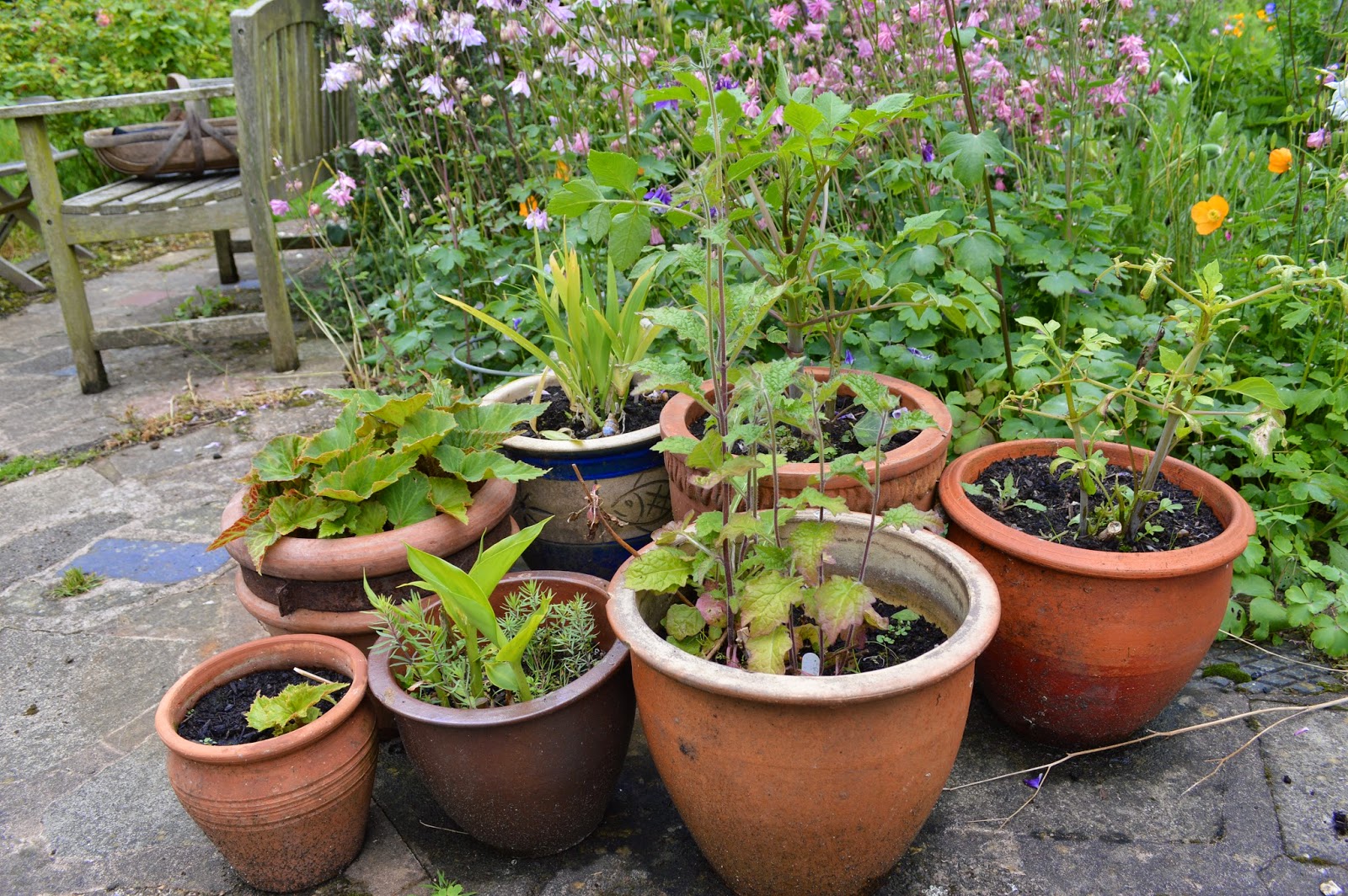 These are the precious pots.  Well, the posts are not that precious but the contents are.  These are all tender little souls that need to live in the greenhouse over winter, there are a couple of gingers, a begonia or two and the chinese foxglove that donates its babies to live and flower in the borders but is kept safe as the mother-plant over the cold months.  There is also the newly aquired Iris confusa and the two tree dahlia plants.  These tree dahlias are cossetted beyond cossetting.  I grew them from seed last year and would hate to lose them.  Whether they will ever flower is anyone's guess, but I am chuffed to little mint-balls to have kept them going over the winter. 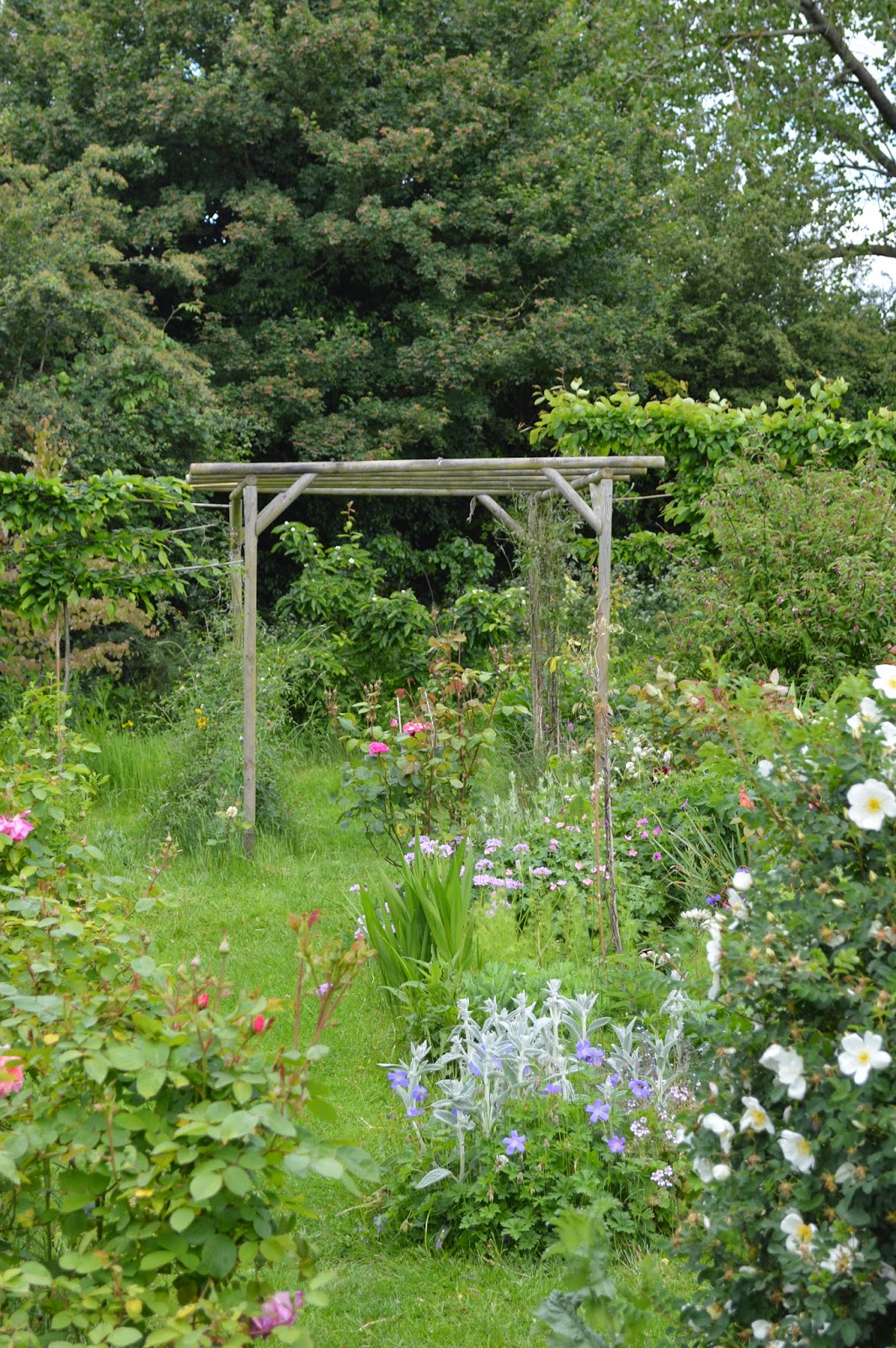 This is the view from the path to the pergola.  I rather like it, the Rosa Hyde Hall hedge to the left and the Manx Rose to the right frame the view.  The Manx Rose is getting rather large and I now think it might be too big for its current position, it might have to move in the Autumn.  We will see. 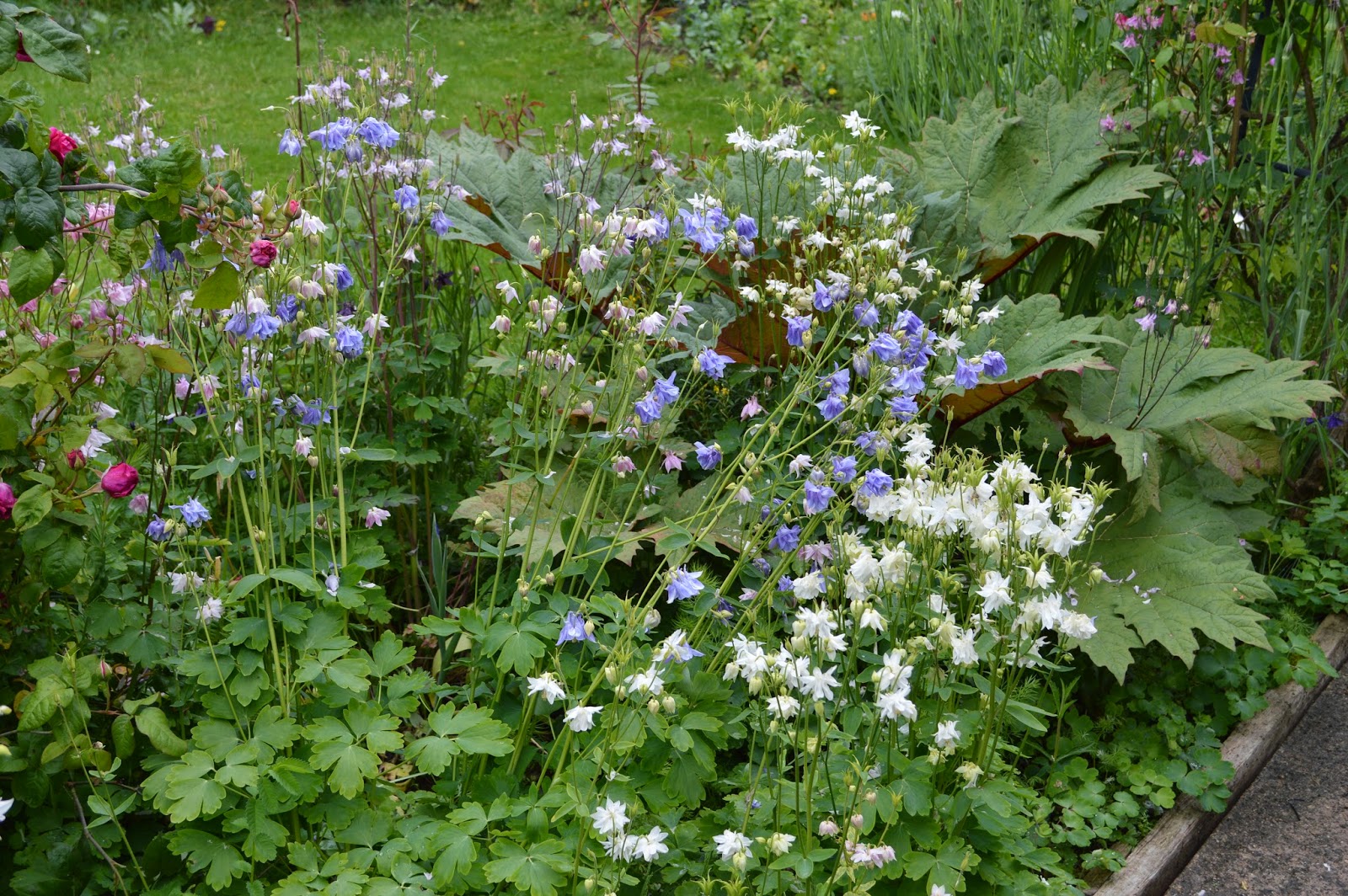 The Coal Bunker Border is home to many aquilegia, I remove many but always many remain.  I do like them (thankfully). 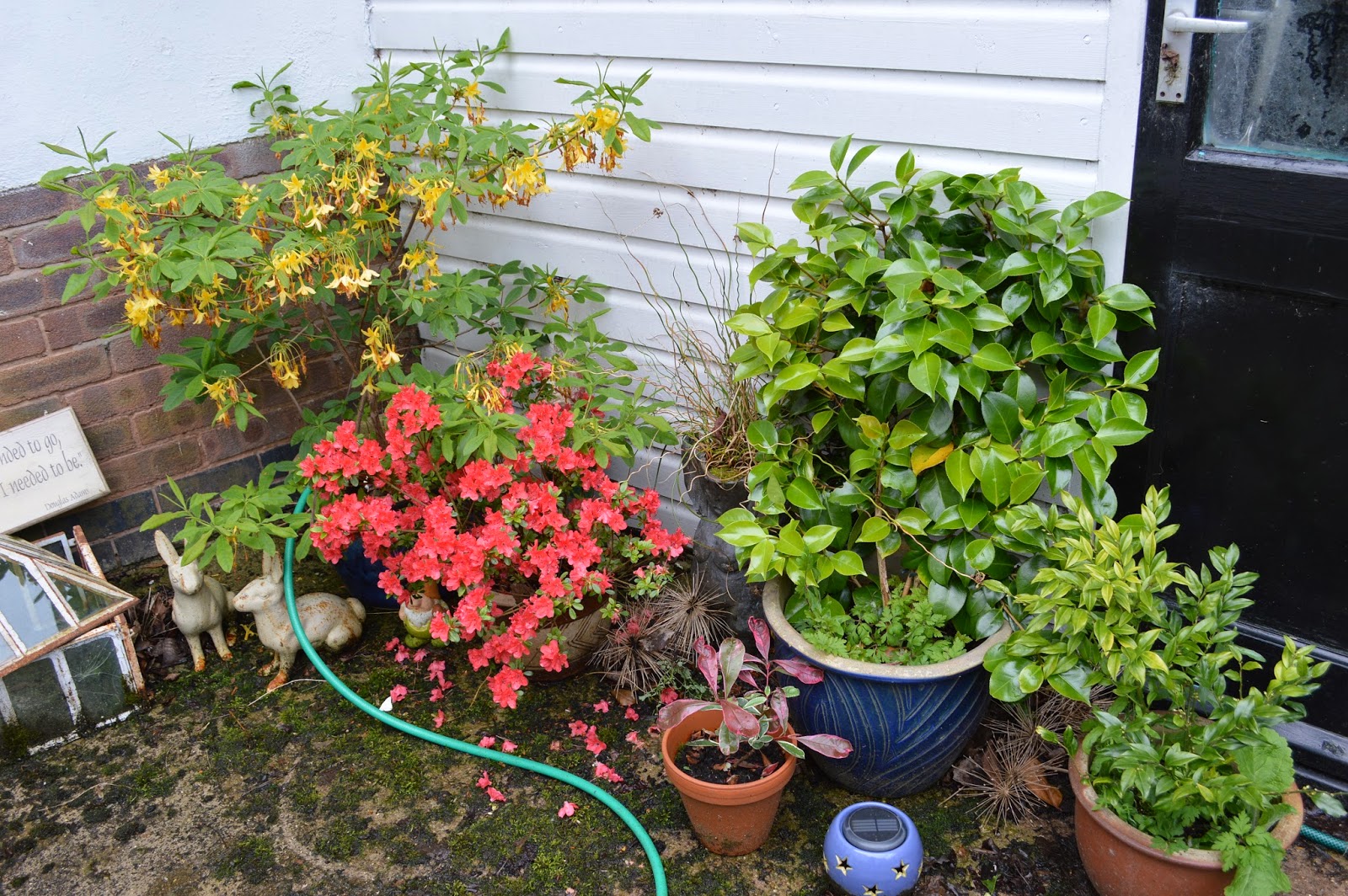 The Courtyard is dominated by the scent of the Rhodondron Luteum and the brightness of the red azalea.  It is quite a good patch of colour at the moment. 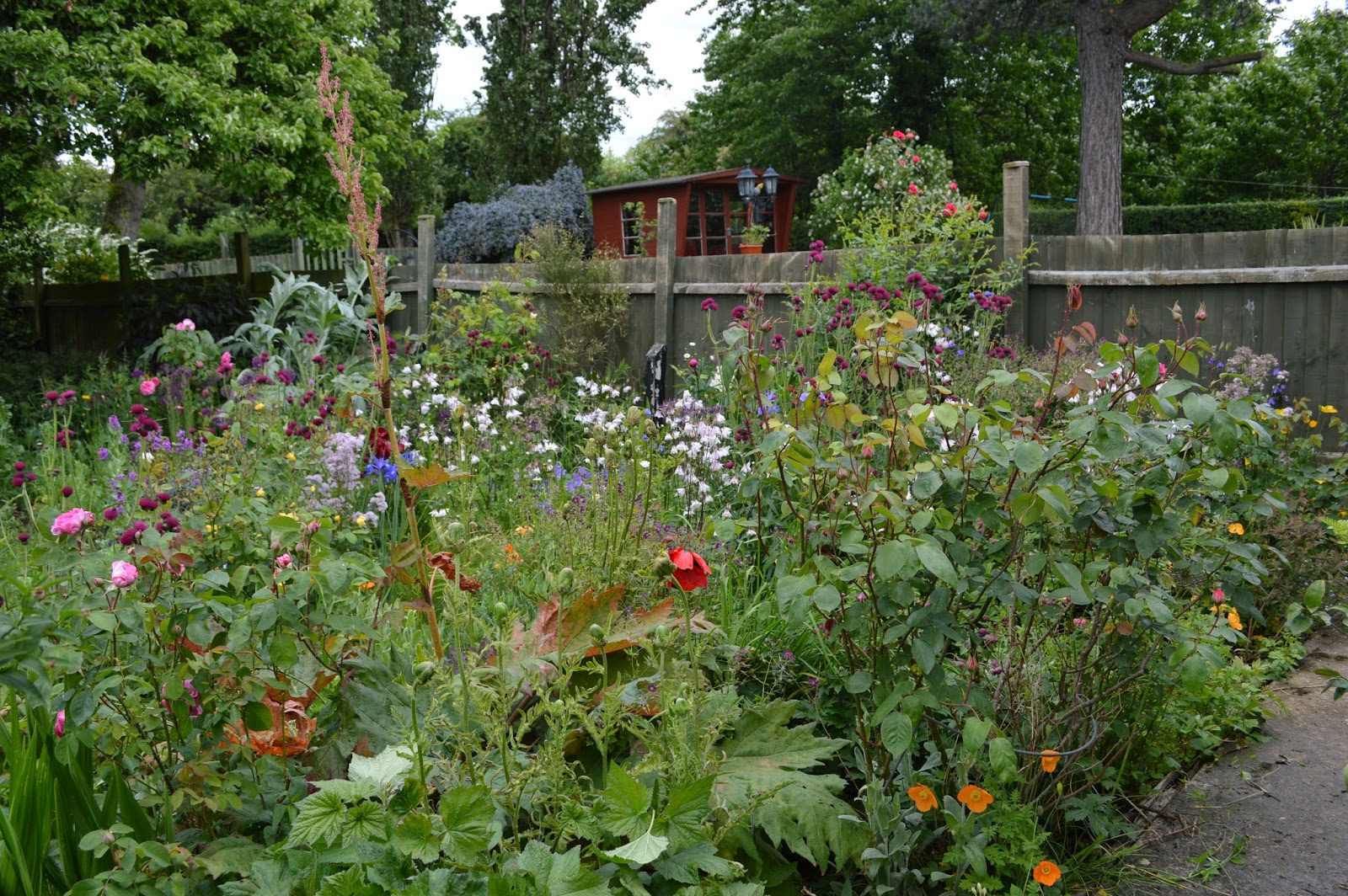 The Conservatory Border has roses, oriental and welsh poppies and lots of aquilegia too.  It is looking good at the moment and still has lots yet to perform. 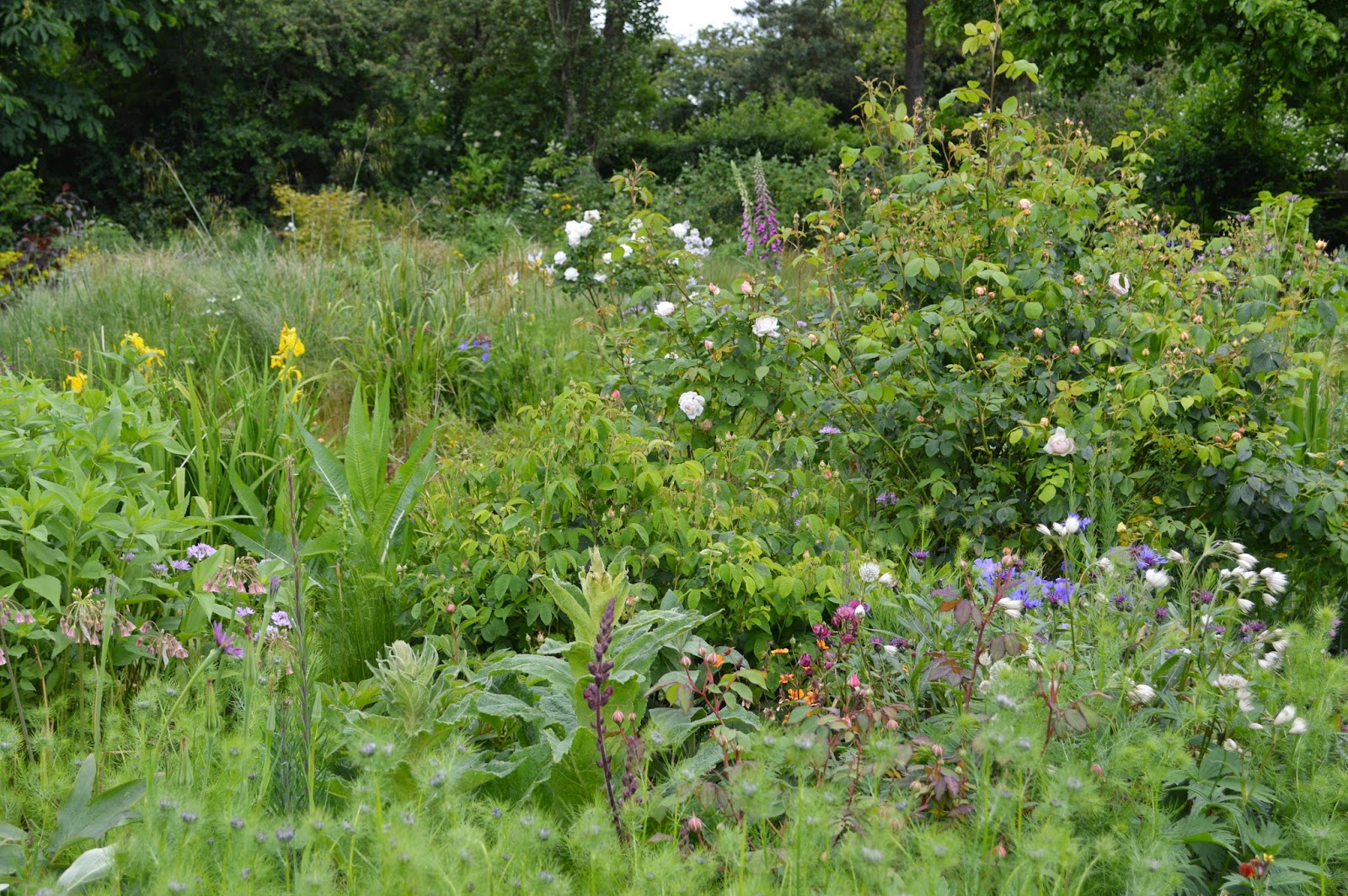 The Pond Border is also looking very blousy, much is growing.  The nigella in the foreground is getting a bit out of hand but is useful for weed suppressing.  I remove it by the handful to create space when I want to plant something out. 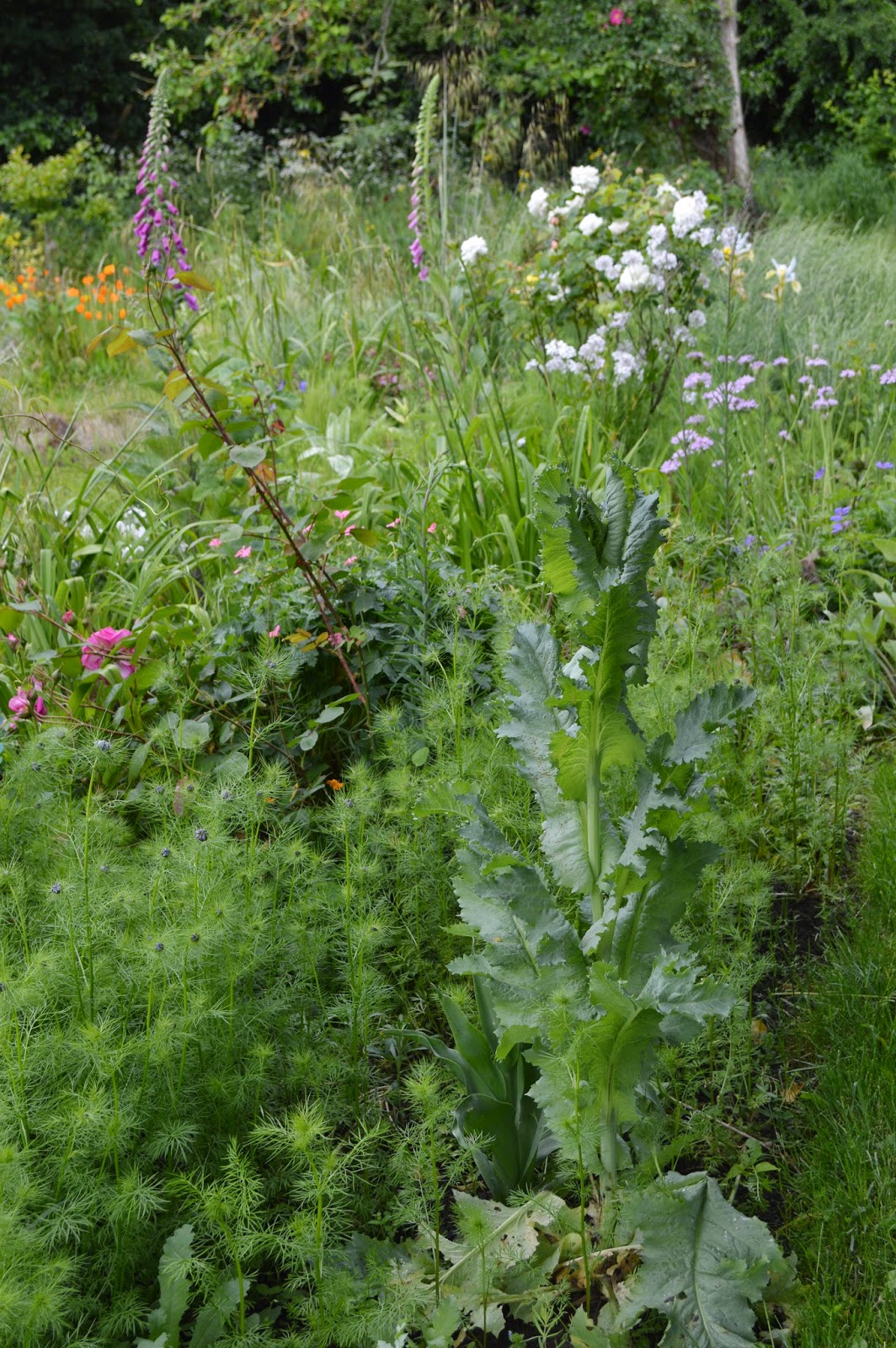 The somniferum poppies are on their way up. 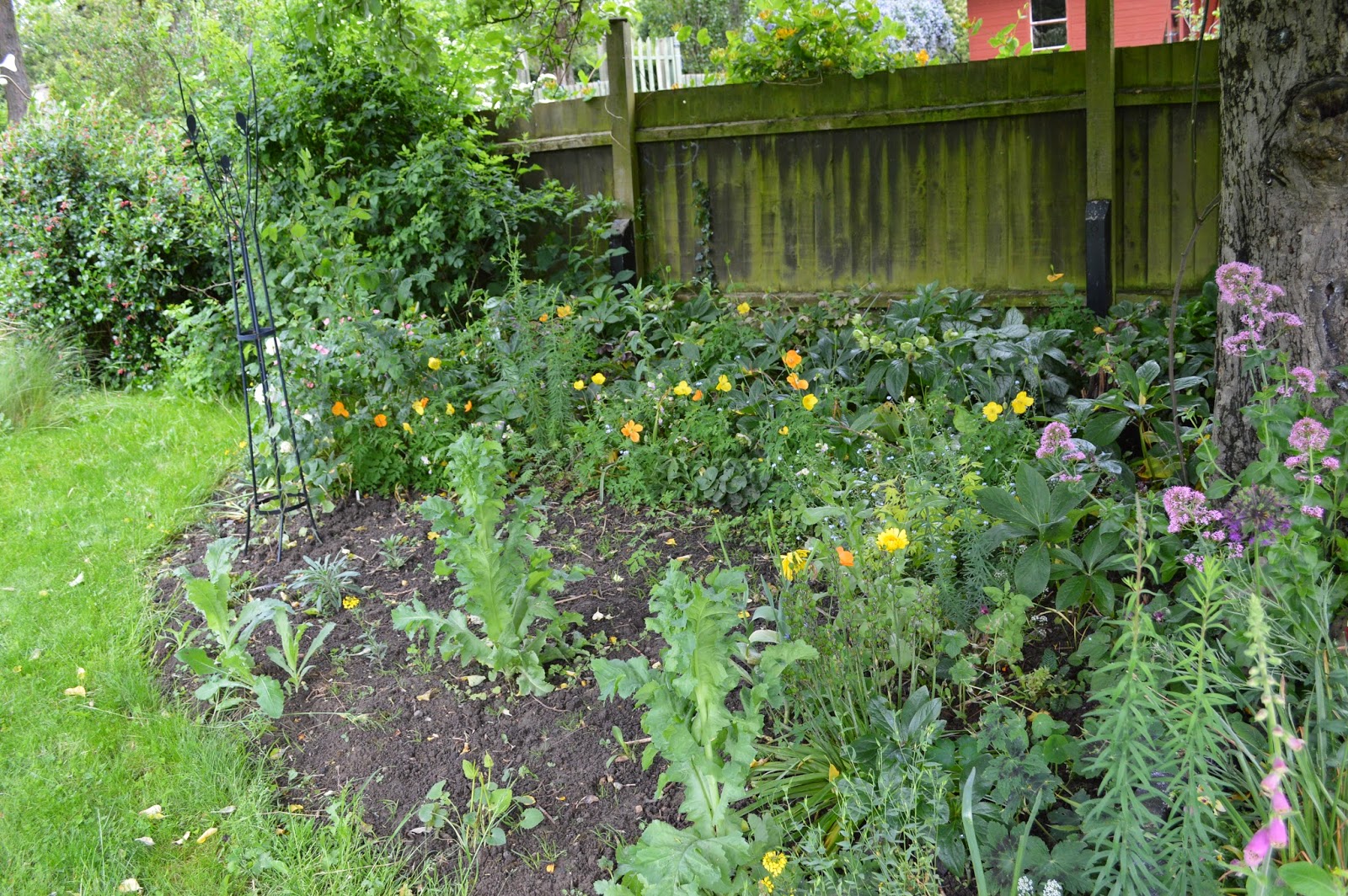 The extended Spring Border is looking a little sparse in the new bit at the front, but it will fill up soon.  I have already added some divisions from existing plants into it and of course a couple of poppies have popped up as well. 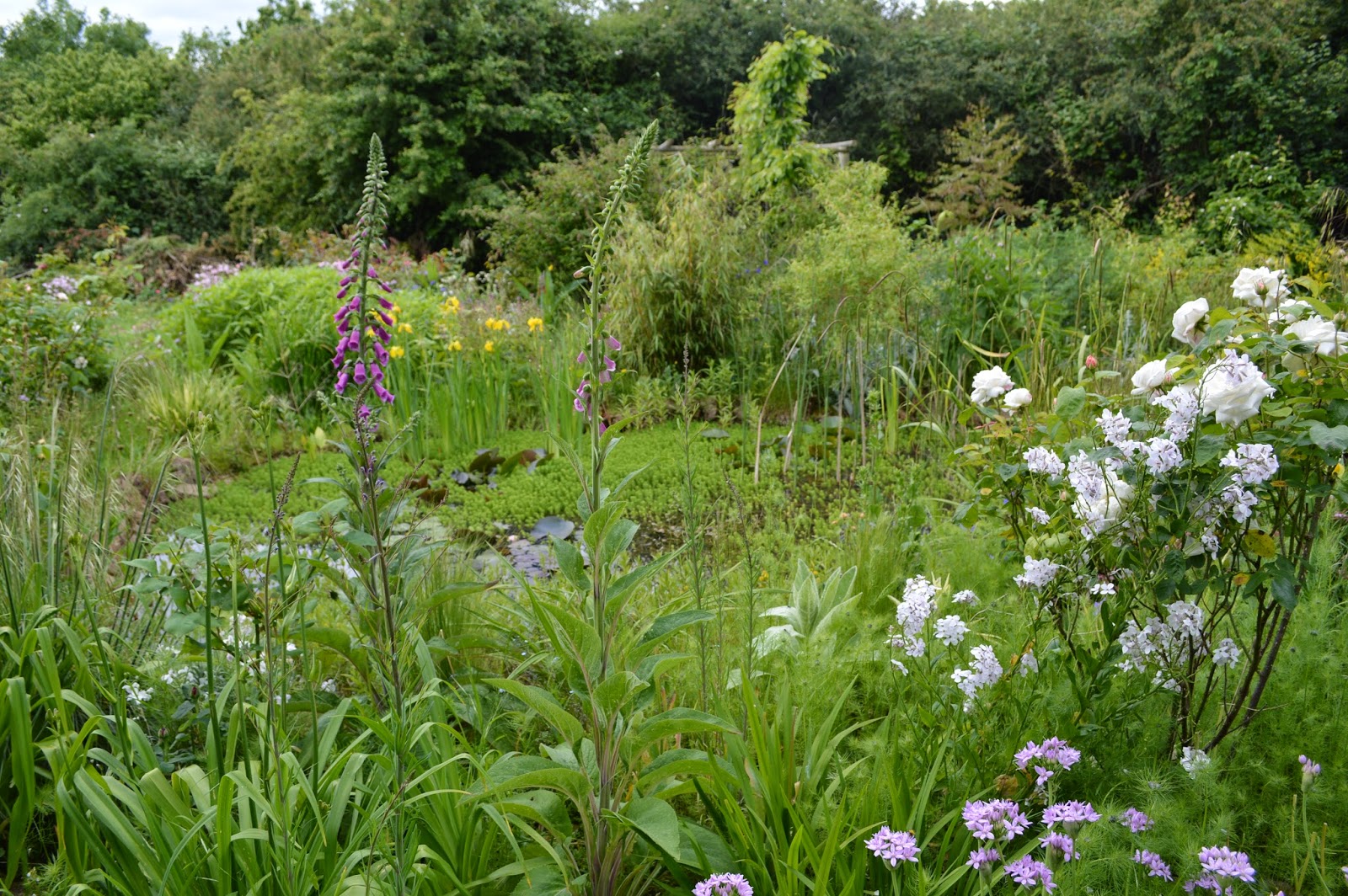 The foxgloves are growing well this year on this side of the Pond Border and the pink alliums in the foreground are threatening to keep spreading.  The white hesperis winding through the Rosa Winchester Cathedral makes me rather happy. 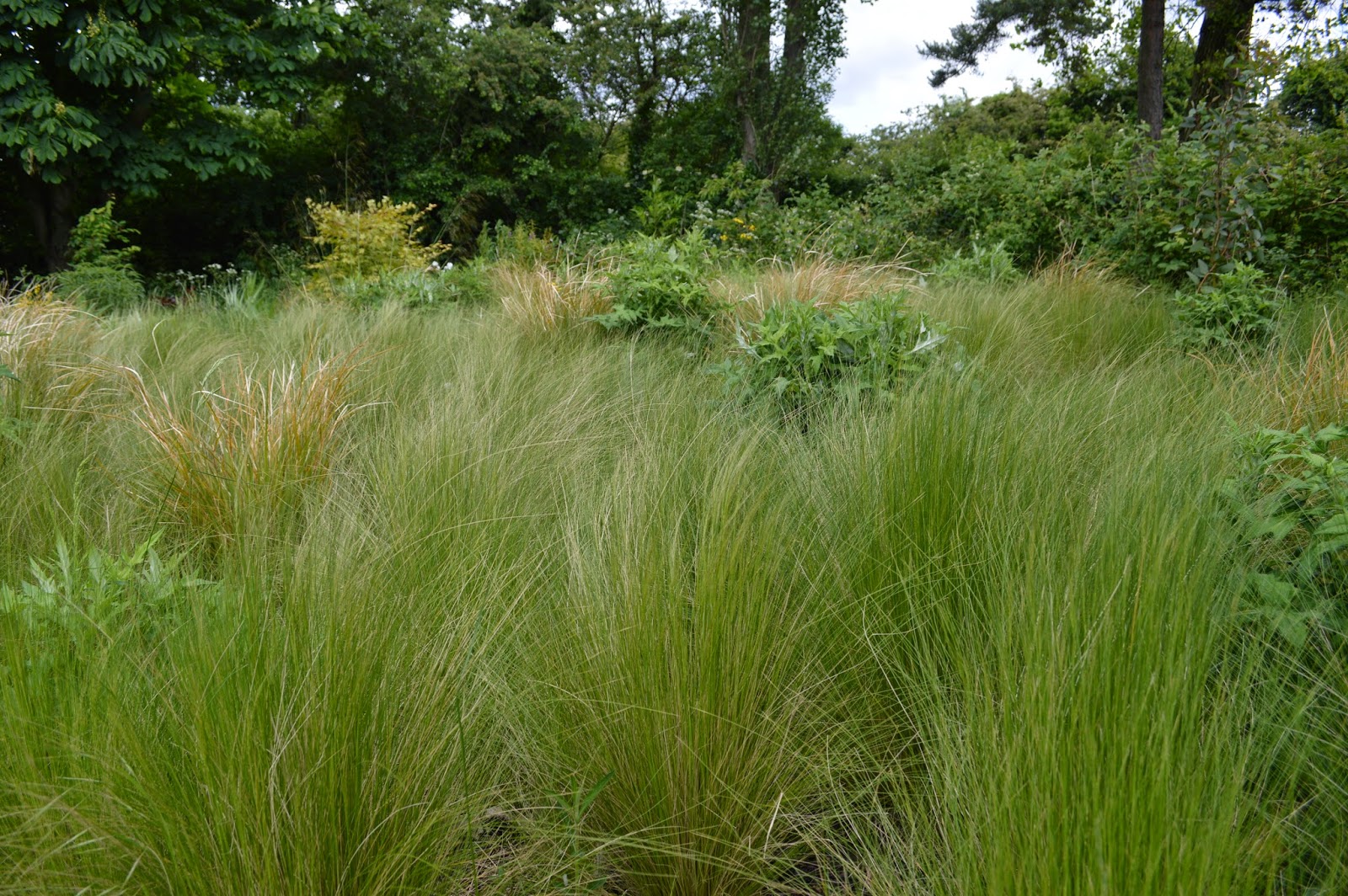 The Prairie Borders are putting on lots of new growth.  For some reason there are very few verbascum coming up this year, maybe I over-weeded. 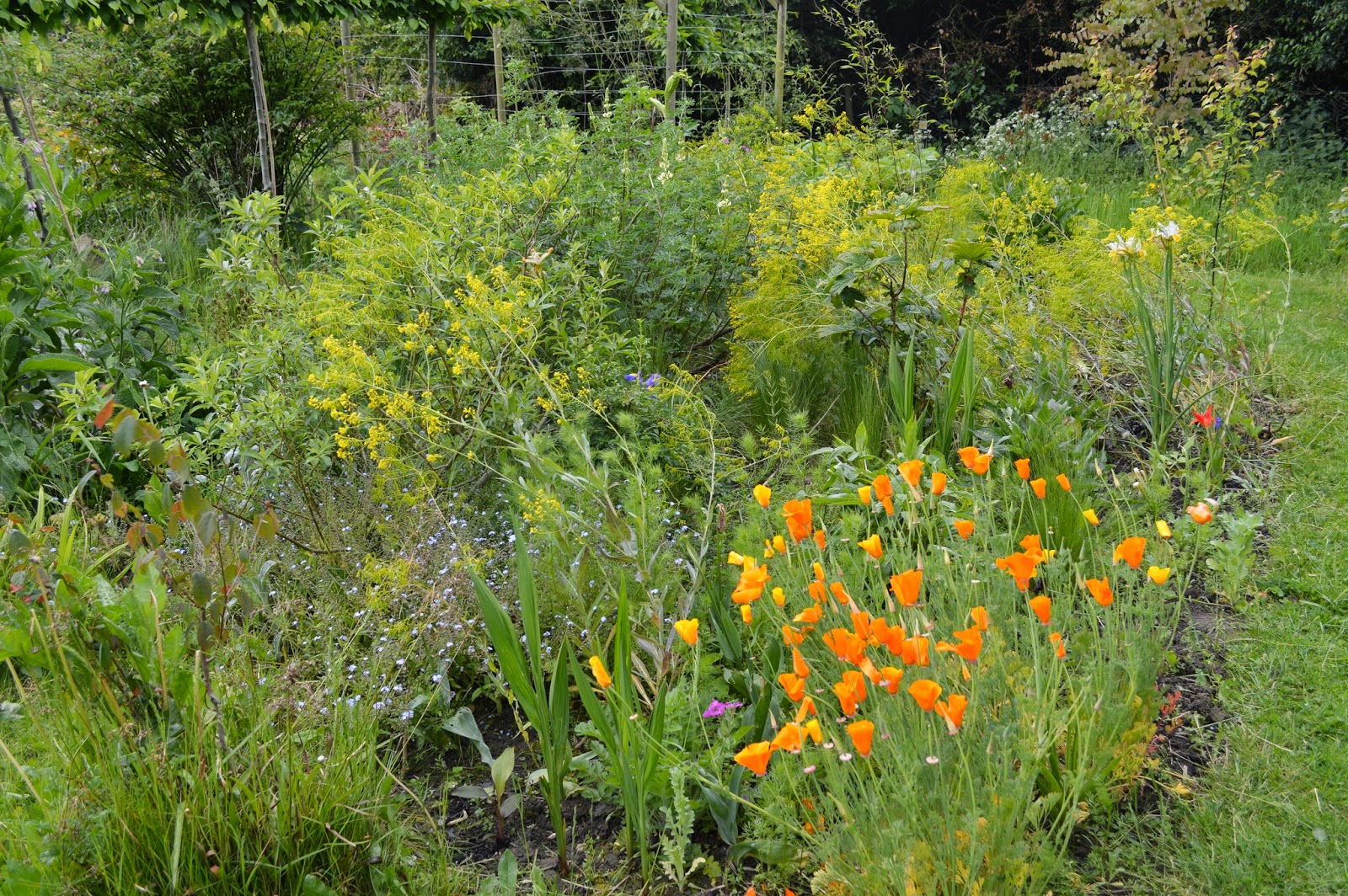 The Tree Lupin Border is full of woad and Eschscholzia californica,  I have planted out some cannas and dahlias in the last week and now I just trying to keep the slugs from eating them all. 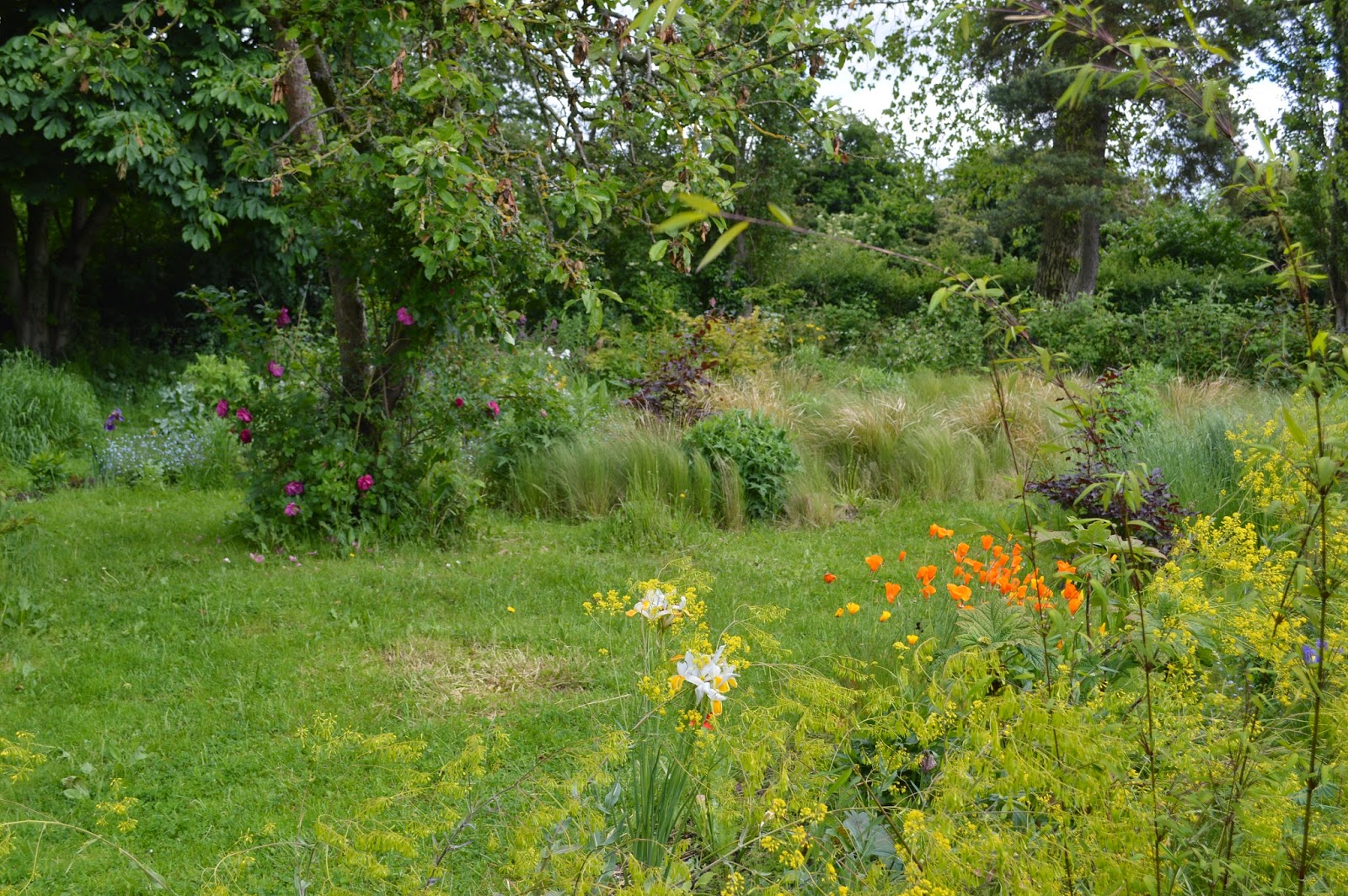 The view from the Tree Lupin Border, across the Dancing Lawn to the Prairie Borders looks good at the moment.  The Rosa Wild Edric is winding up the apple tree, though I am worrying about the apple tree I think its days are numbered.  A crack has appeared part way up the main trunk and I think I am going to have to cut it back hard before it falls. 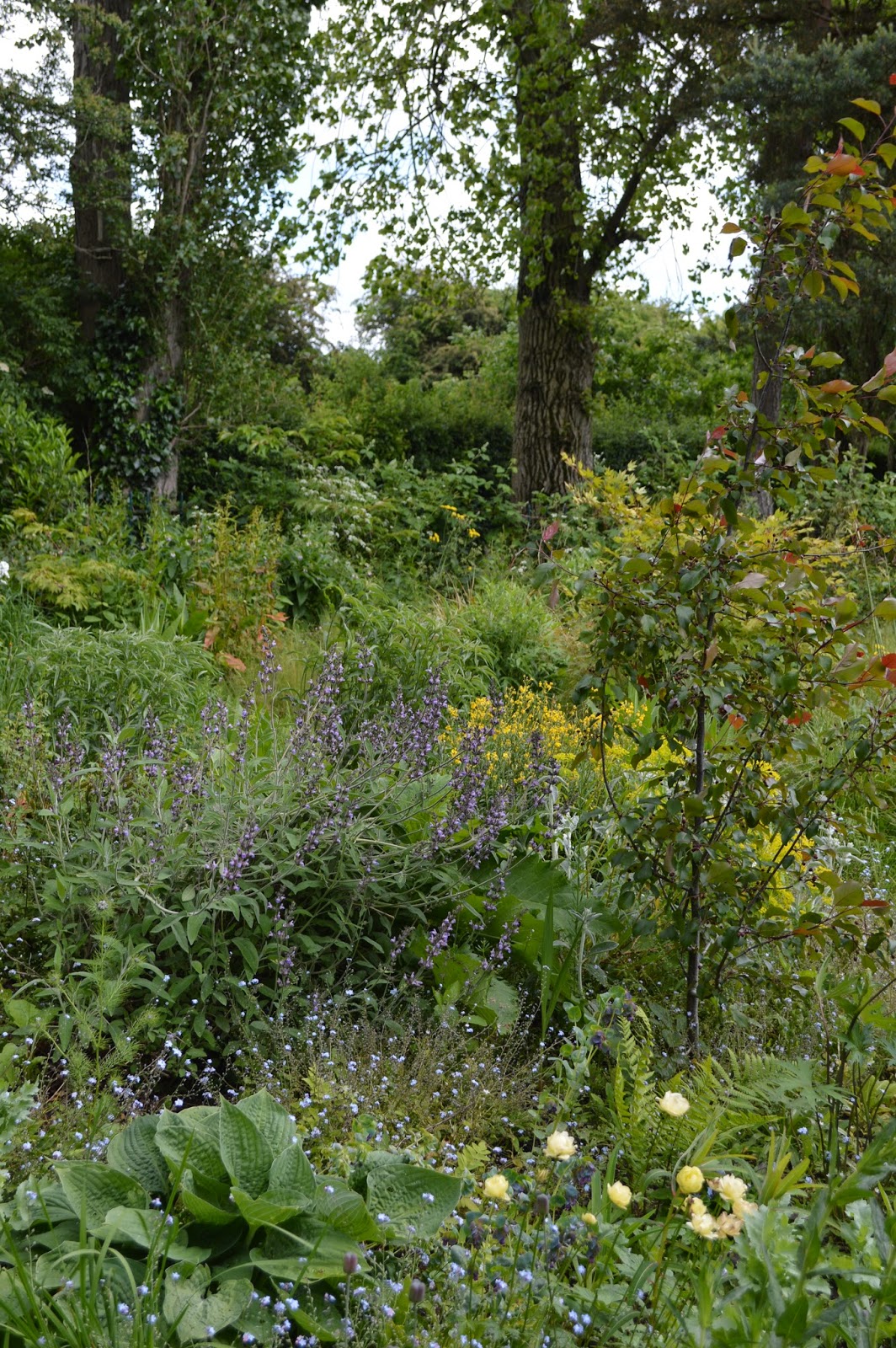 The Bog Garden and Woodland Borders are looking very good.  I am very pleased with them.  Yes you can see a hosta, I did not plant it but I have allowed it to remain as long as it behaves itself.  The ferns and trollius are doing very well this year. 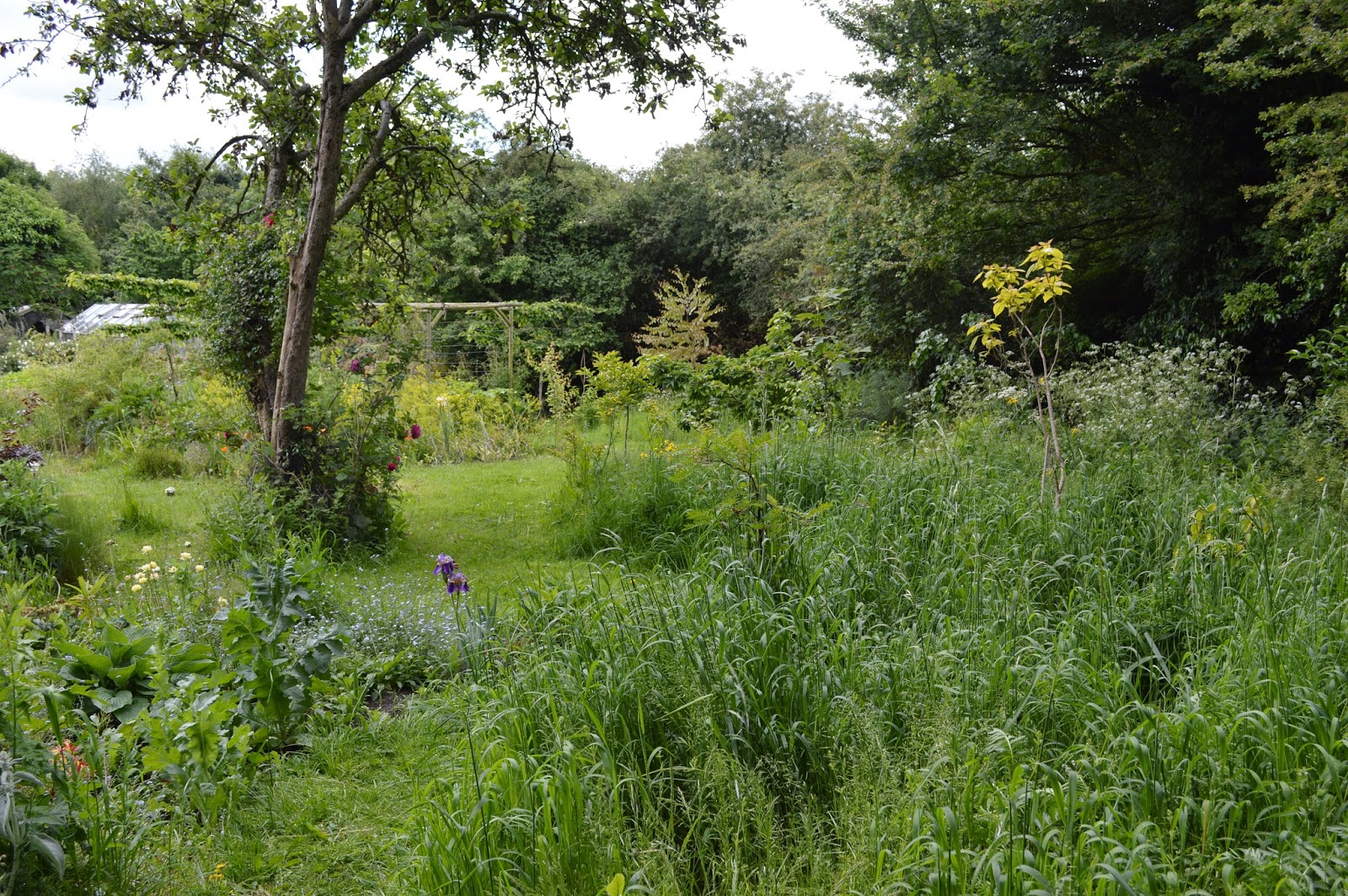 I like the view from the top of the garden looking down the Wild Garden, over the Dancing Lawn from the other side towards the the Tree Lupin Border.  The grass in the Wild Garden is rather long, the soil is clearly very rich. 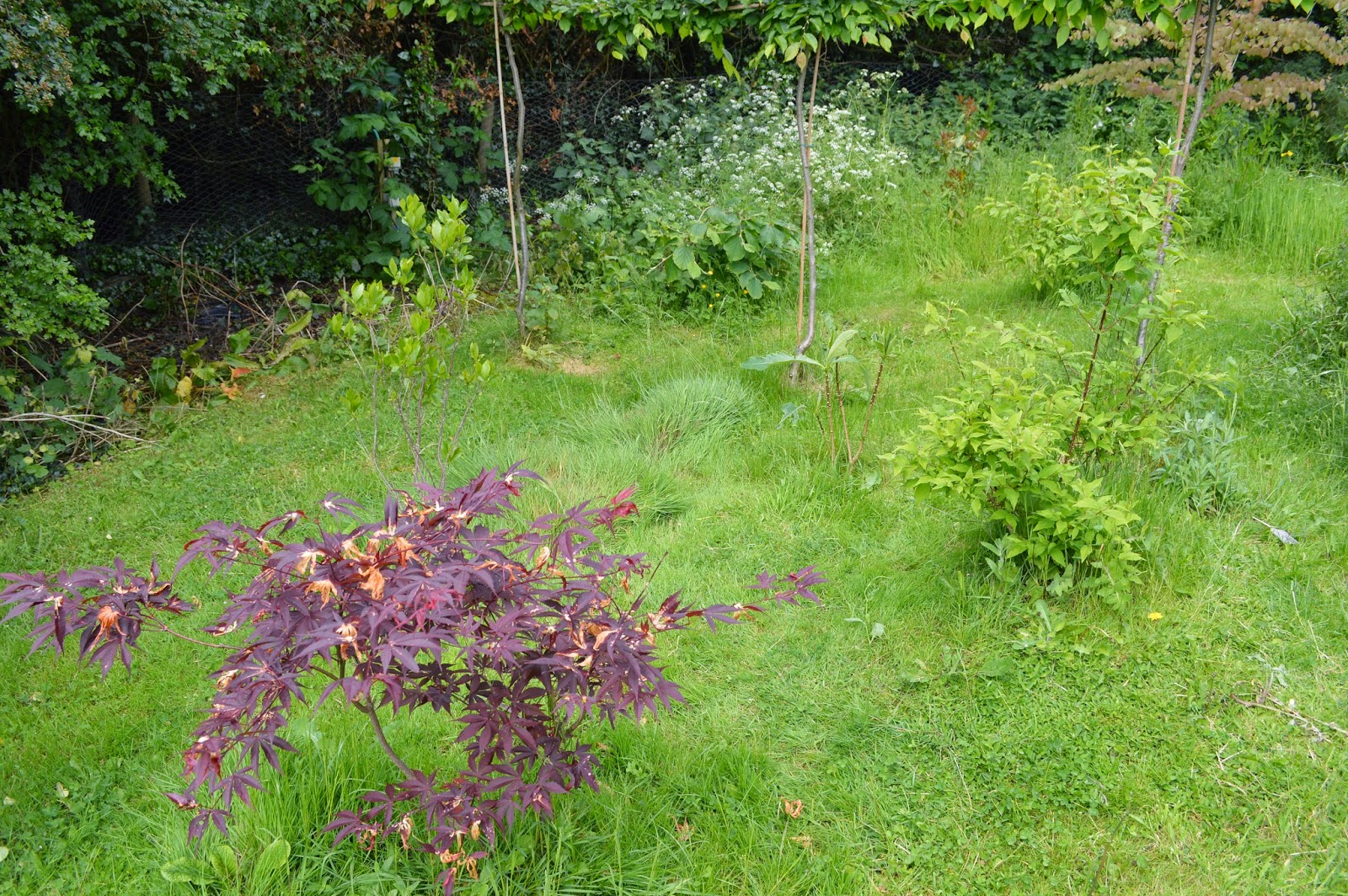 The Four Sisters are growing well.  The Carol Klein acer took a bit of a battering from the late frost but has recovered well. 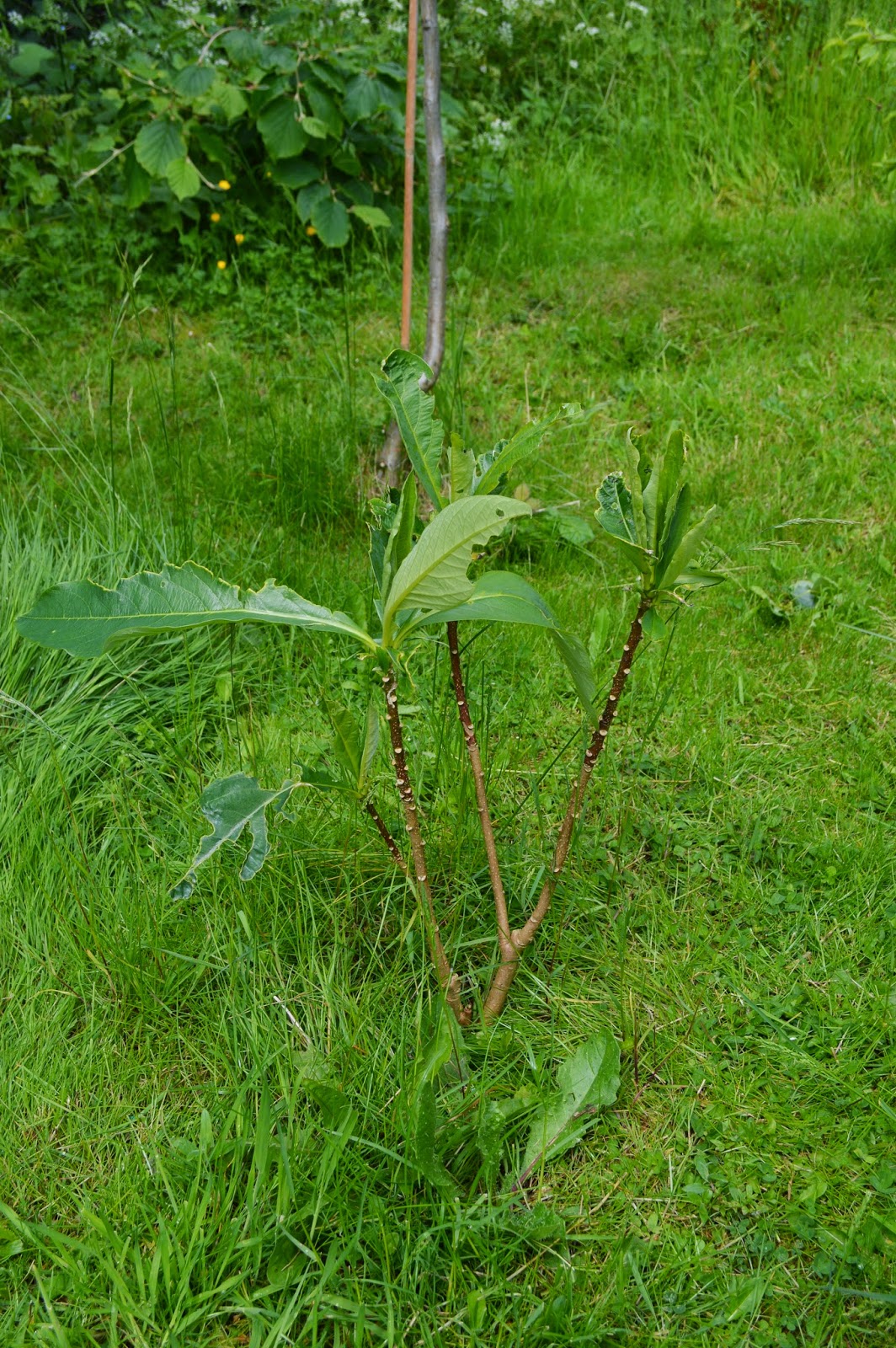 The Edgeworthia also took a battering from the frost and has been slugged a bit.  It is putting out some lovely healthy leaves though and it is still alive, this is a great achievement in my view. 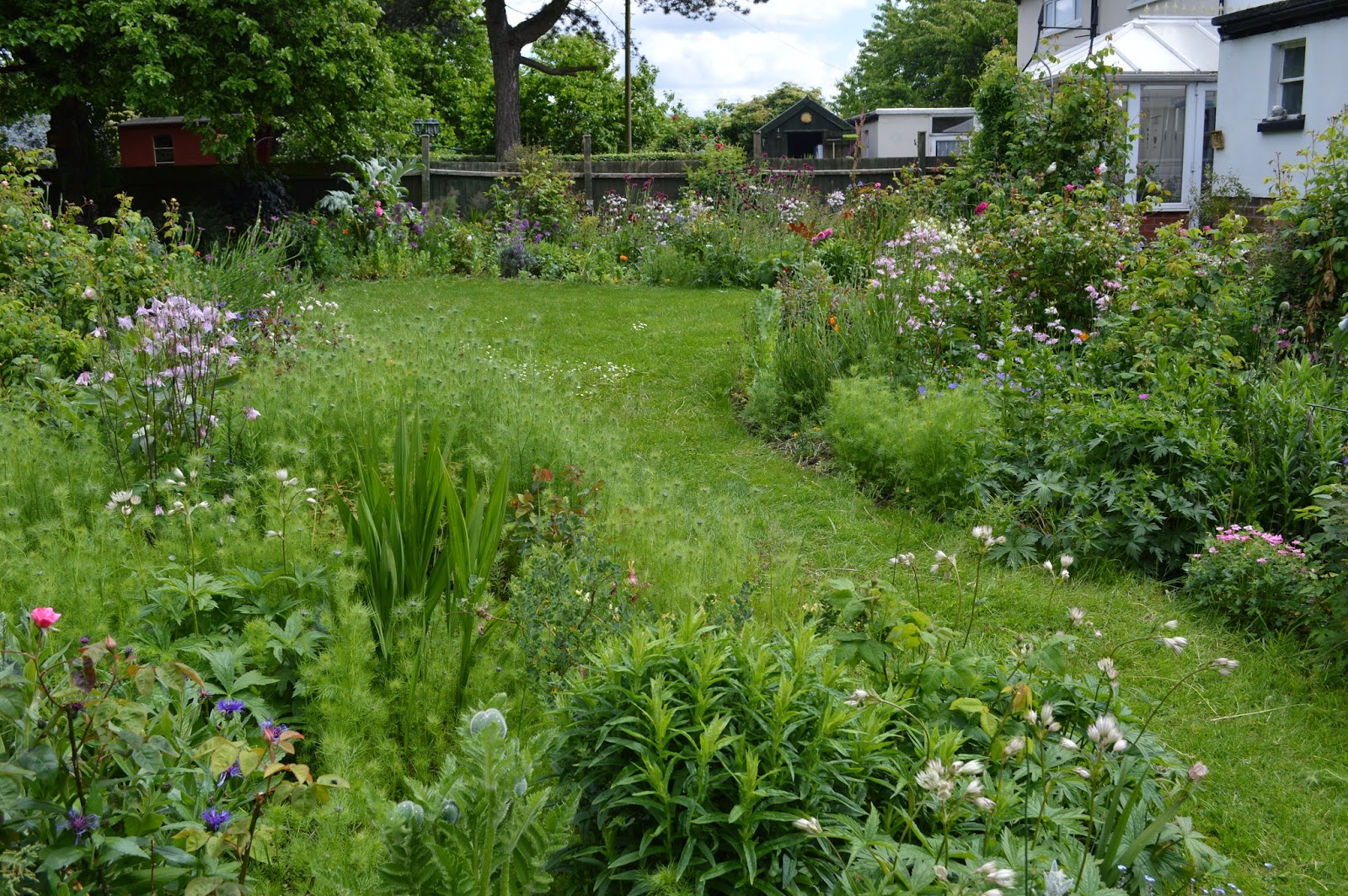 The view along the Long Shoot makes me happy. 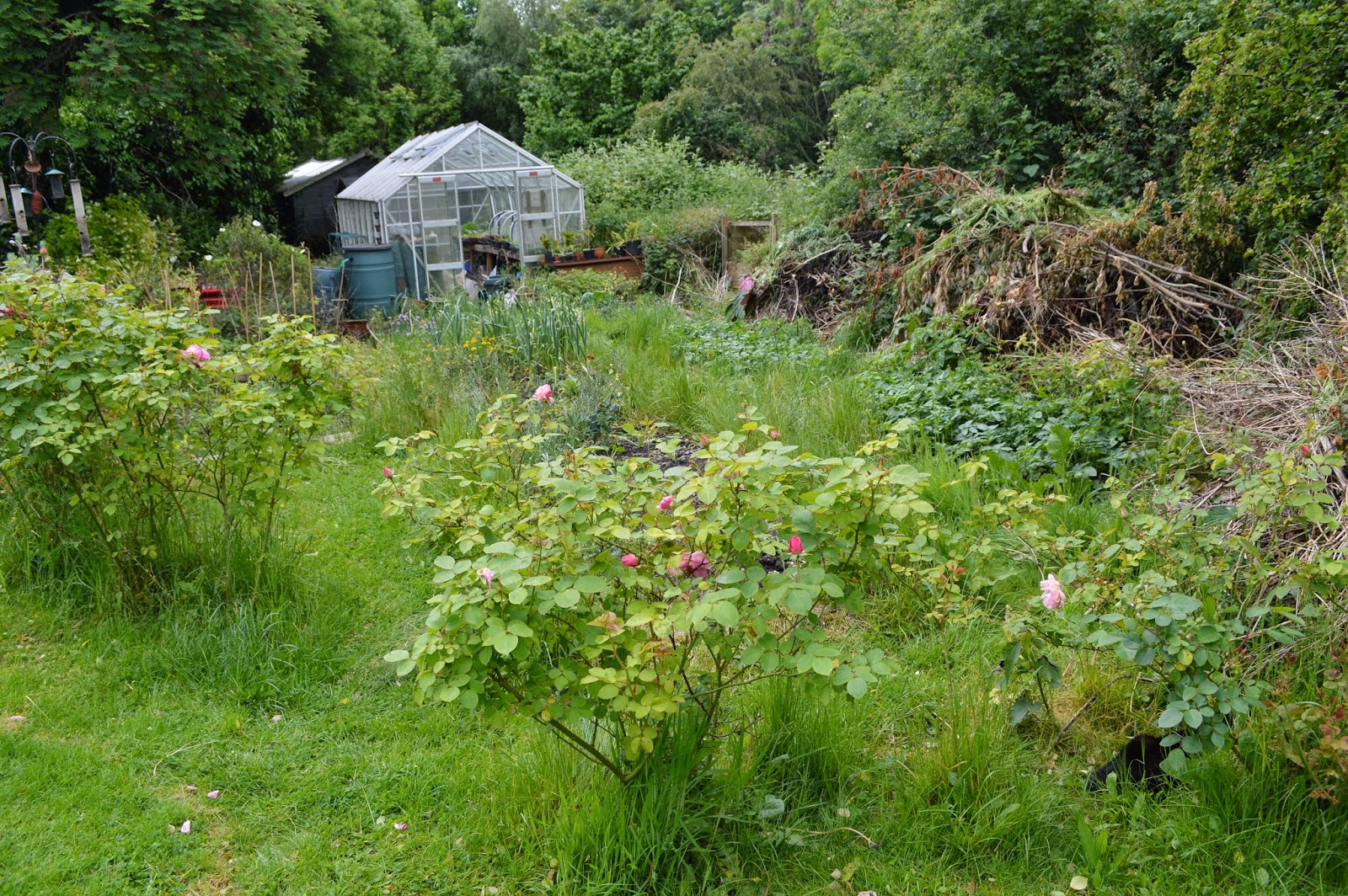 The Rosa Hyde Hall hedge gets a little bit more hedgy all the time and is coming into flower.  Last year it flowered until the frosts stopped it, what a great rose. 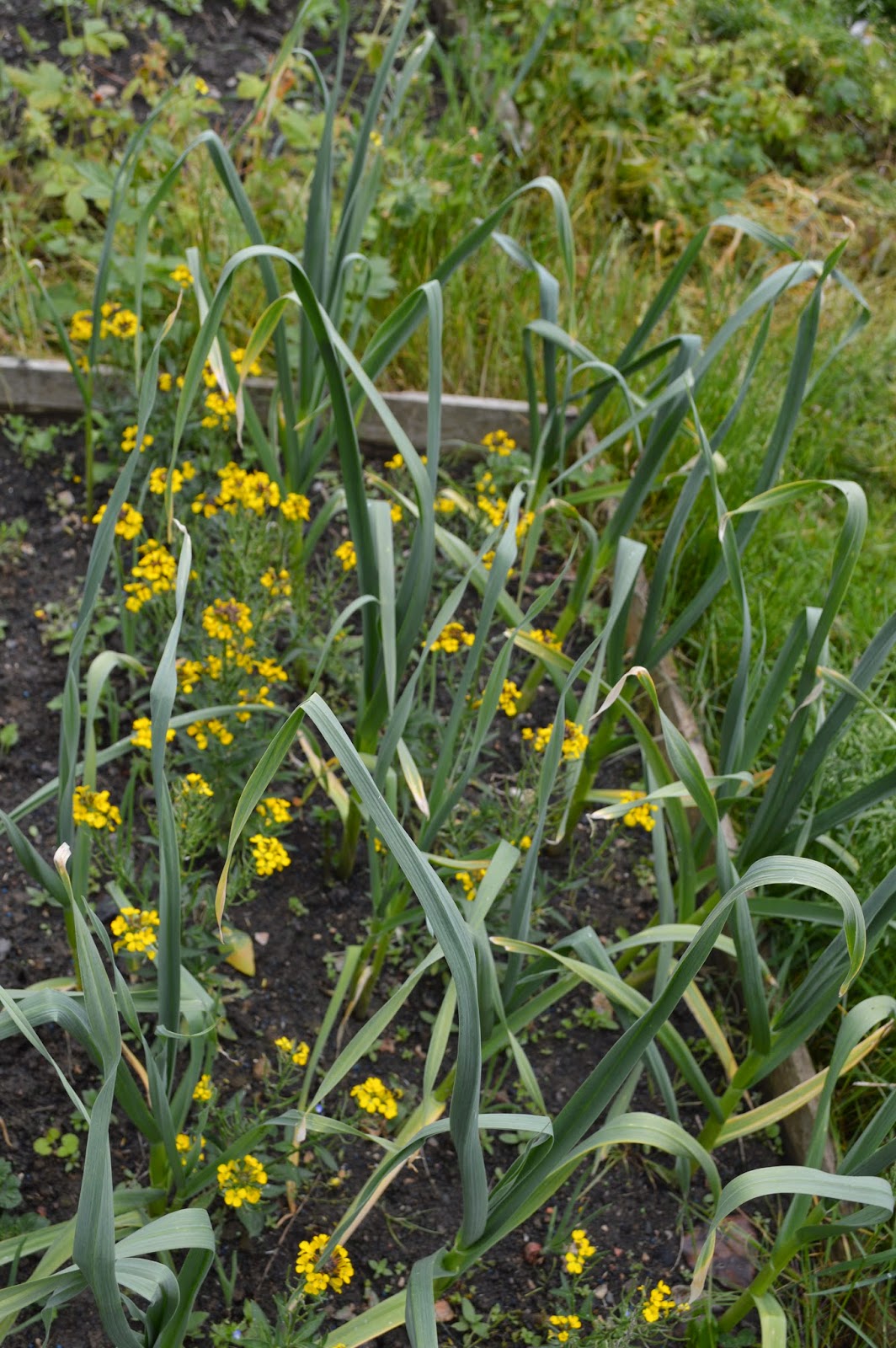 The veg beds are coming on slowly this year, I have planted out some of the peas and courgettes and there are still beans and sweetcorn getting ready to come out.  I rather like this garlic and wall-flower combination. 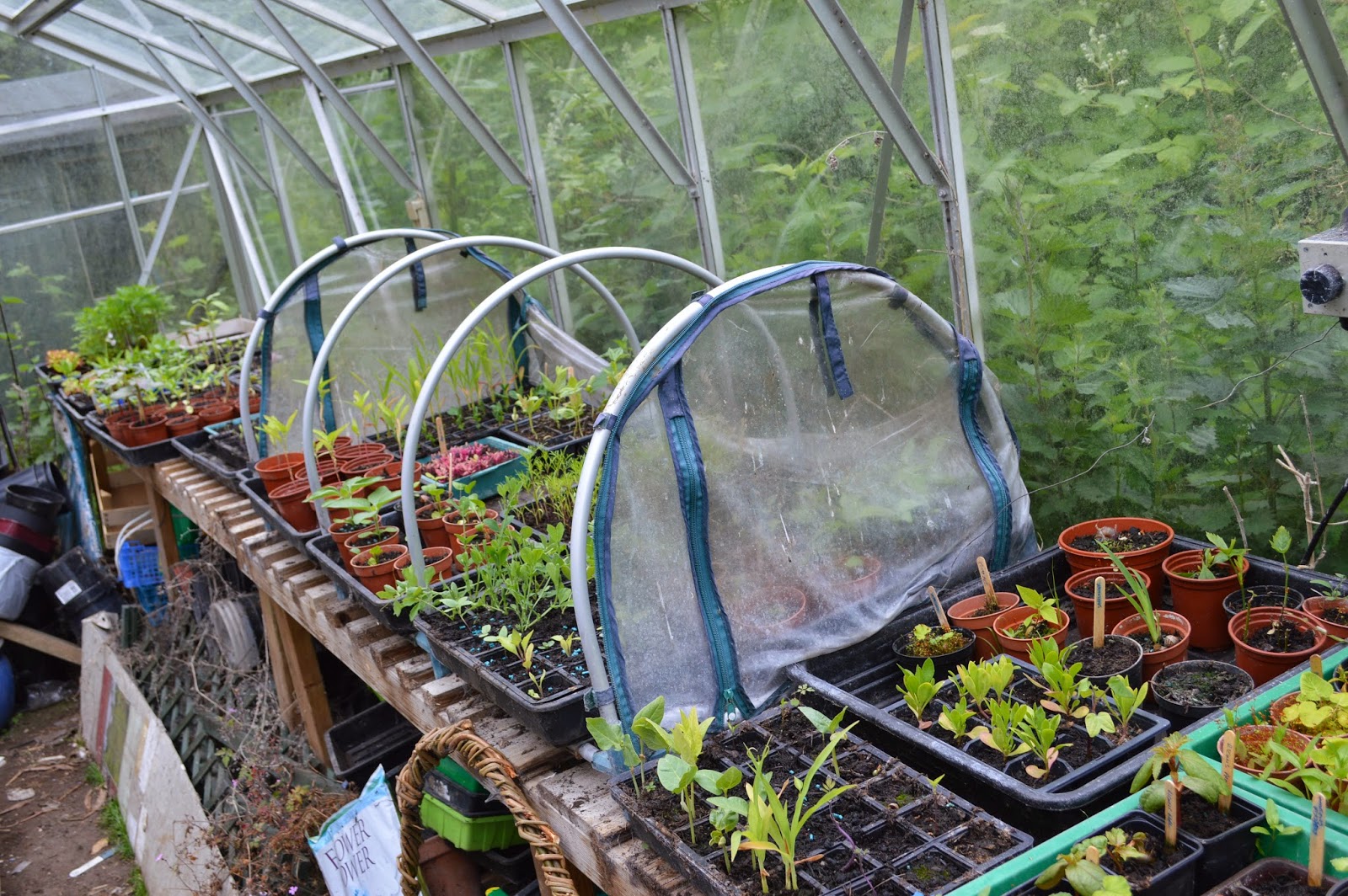 In the greenhouse there is lots going on, there are lots of seedlings waiting to be pricked out, potted on and eventually planted out. 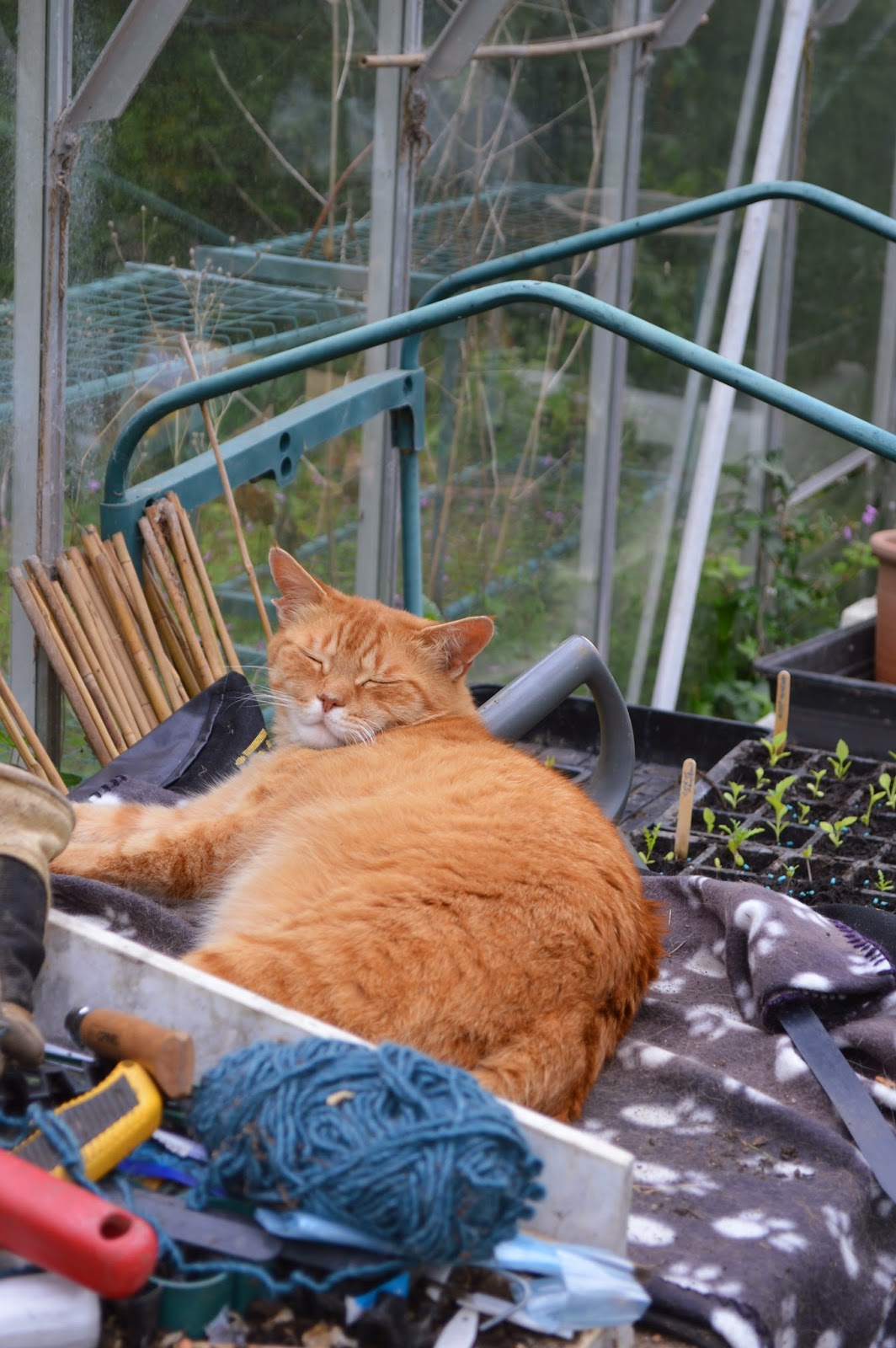 The greenhouse now has a supervisor, watching over all the proceedings and keeping the seedlings safe.  Or sleeping, depending on how you view it.  Bruce has only been living here a couple of months, but he knows what he likes and the greenhouse is his favourite place. 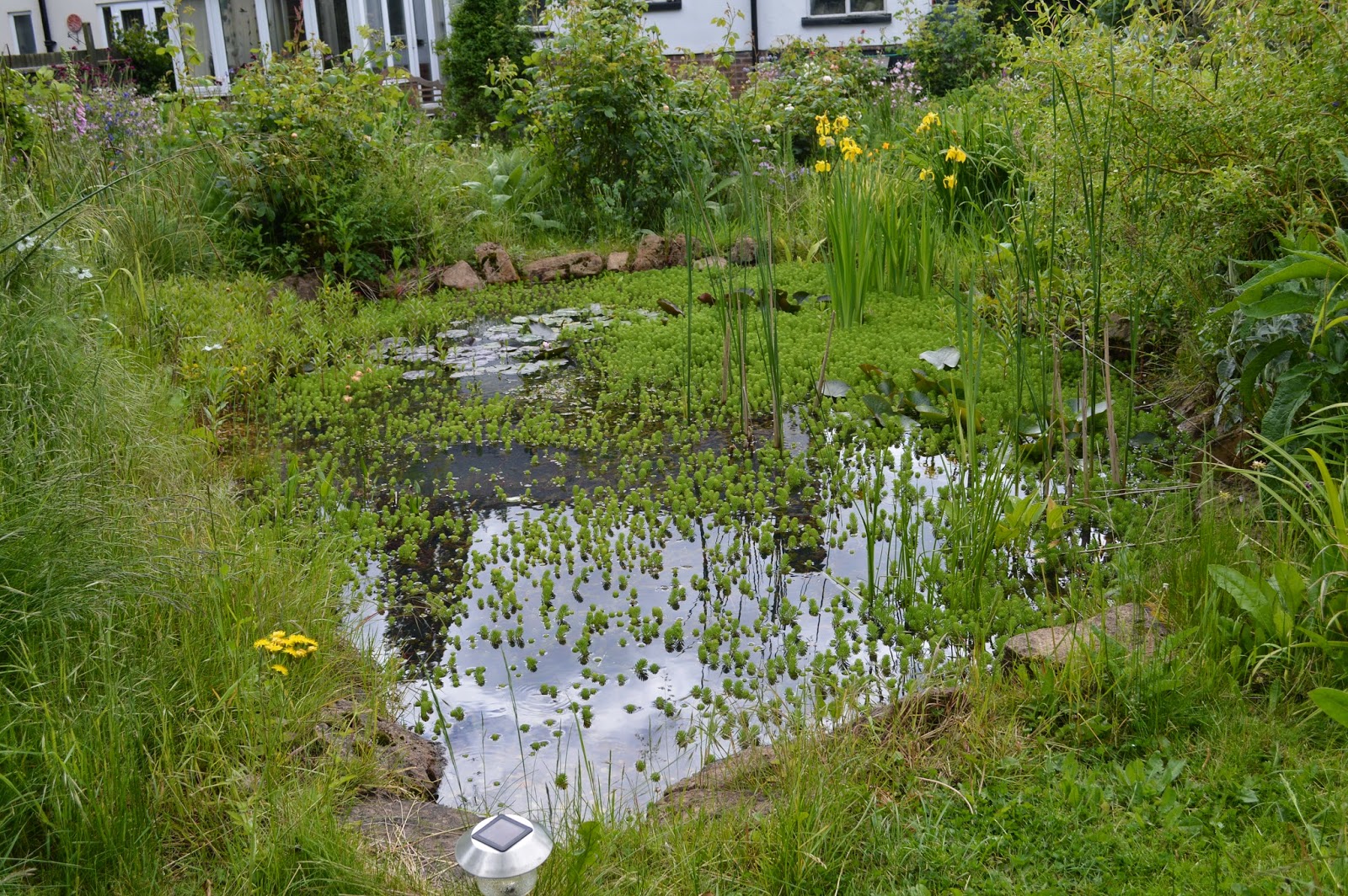 I end as ever on the pond.  It is wonderfully full as we have had lots of rain.  It is full of tadpoles and damsel-flies have been emerging on the warmer days.  I am very pleased that the flag-irises are flowering well this year.  I am very unhappy about the amount of parrot weed though, I thought I had removed most of it - clearly not!