Chelsea Flower Show, episode one: the shell and the dinosaur

May 22, 2014
I will be upfront and say quite easily, I like Chelsea Flower Show.  I've been going for many years now (more than ten is officially many) and it is for me one of the highlights of the year.  I do get excited about going.

This year was no different, I was looking forward to going and made sure I had camera well charged and plenty of space on the memory cards as I knew many photographs would be taken.  I took many photographs but what I want to do in this post is just focus on a few of the gardens.

There was one of the Fresh Gardens I was intrigued to see, The Cave Pavilion, designed by Sophie Walker and containing plants supplied by Crûg Farm Nursery, one of my favourite nurseries.  The Fresh Gardens aim to be a bit different, and also are smaller and therefore easier as an entry level to the Chelsea Show garden world.  The Cave Pavilion was based on a Wardian Case, the 19th century solution that plant hunters used to transport their discoveries back to the UK.  The pavilion was aptly sponsored by The Garden Museum and aptly filled by Sue and Bleddyn Wynn-Jones as they are themselves highly regarded plant hunters. 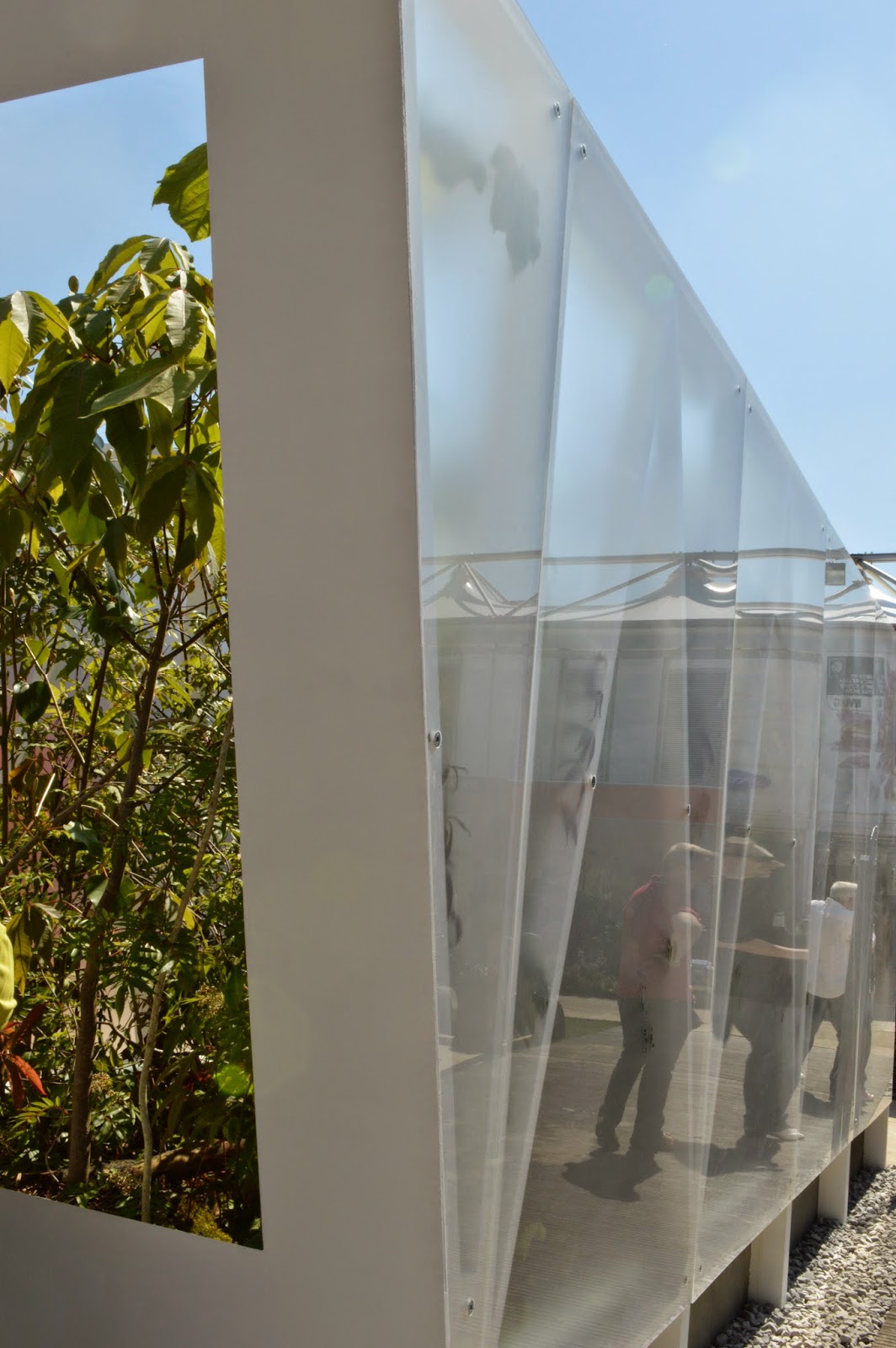 The plants were housed in this large, white polycarbonate case.  You could not walk into the case, but could sit outside and view.  This was a brave approach, but for my part I thought it worked.  It was what it set out to be.  It won a silver medal, which I had hoped would be more, but it is a good medal to win. 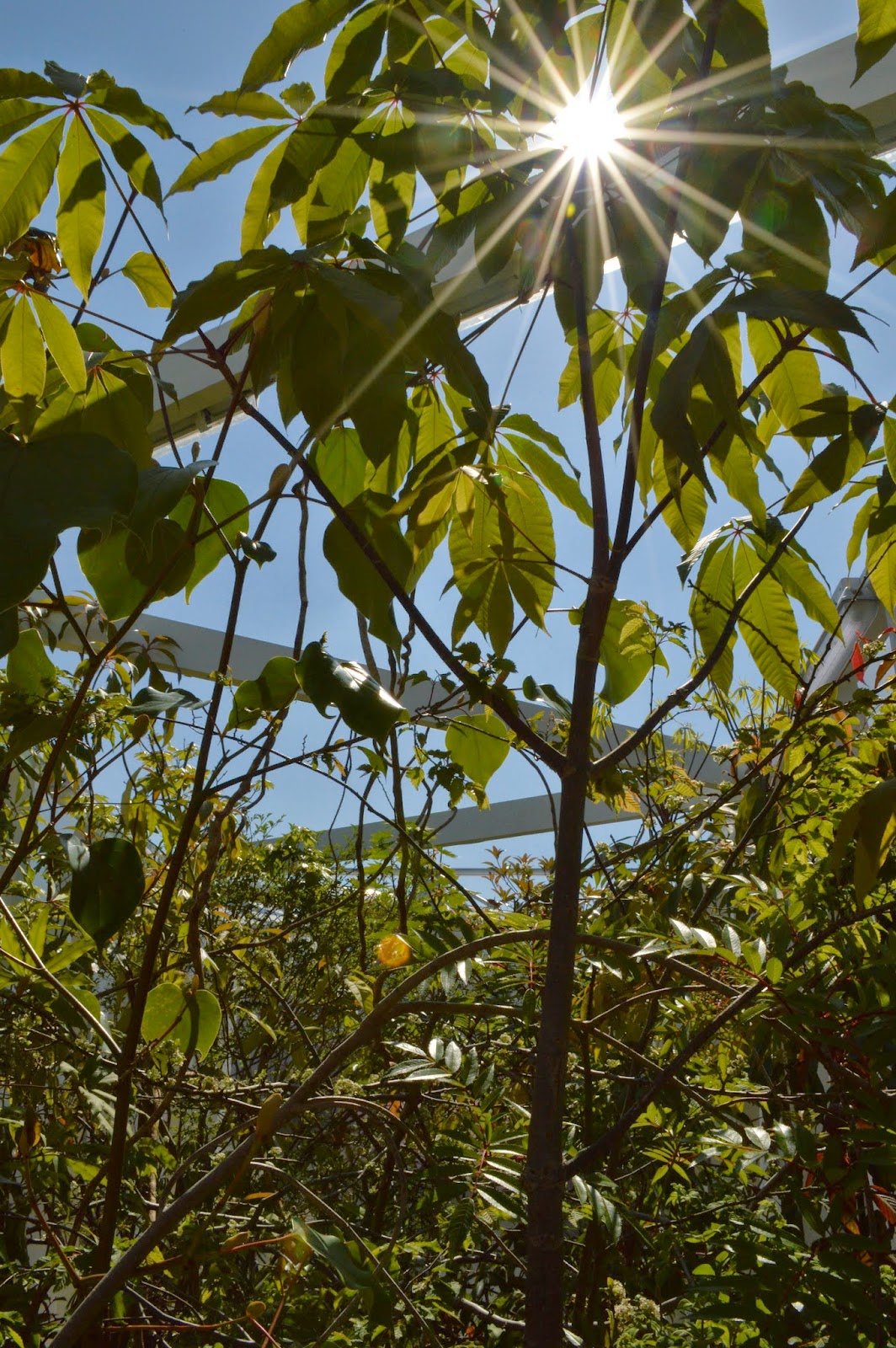 The plants were the stars, there was no fancy furniture, no hardscaping, just plants.  I like plants.  I liked these plants.  It was also something a bit unusual and to be frank, that was very welcome. 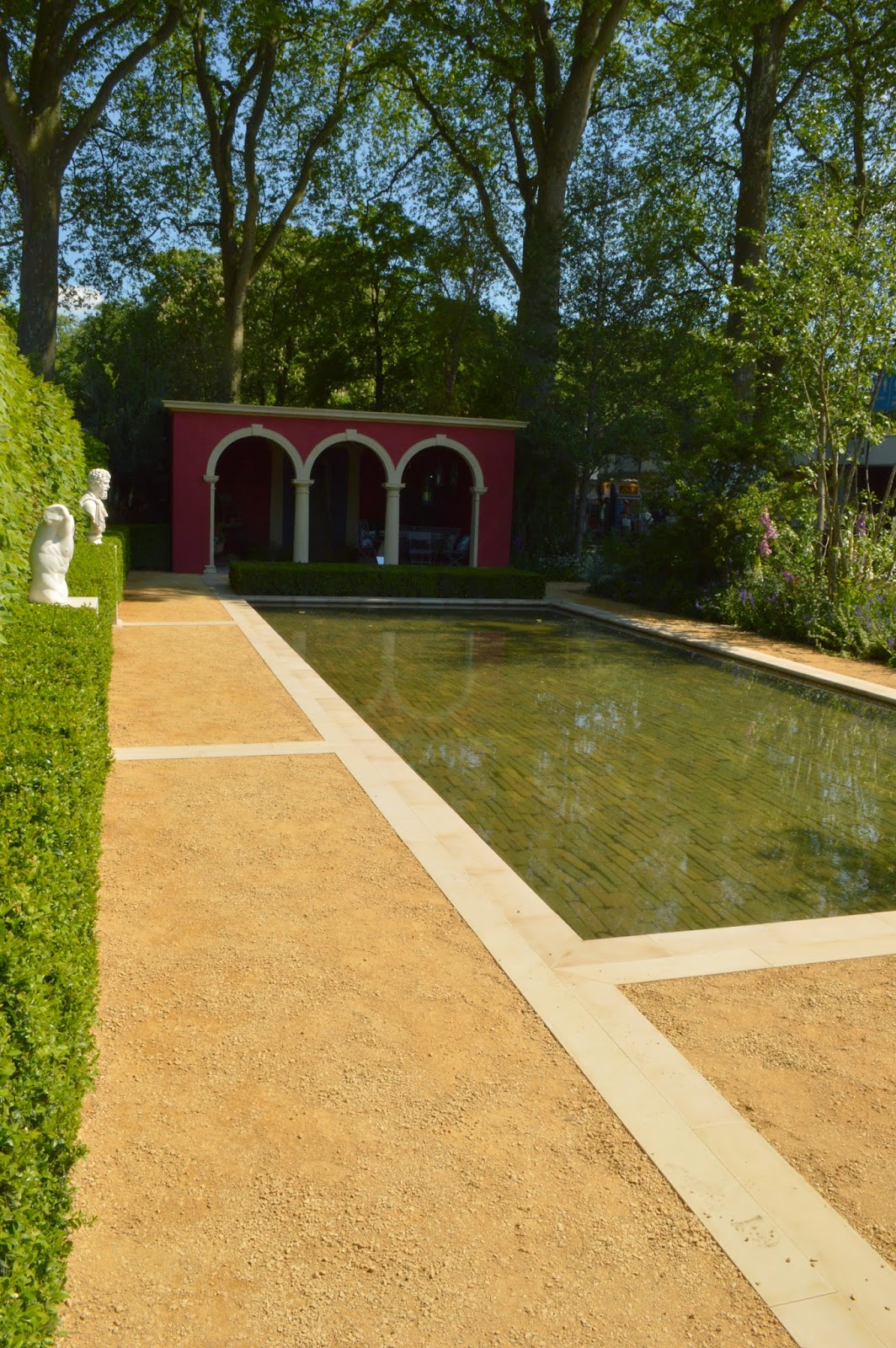 There was also the BrandAlley Renaissance Garden designed by Paul Hervey-Brookes.  Now I think it fair to say that this garden, particularly from a photograph taken at this angle, did look a bit hardscaping-heavy.  The pool and loggia at the rear dominated.  The pool had a fantastic brick-lined base, it really was a beautiful piece of work.  The loggia reminded me very much of Portmeirion, which as an Italianate garden itself, was not a bad thing to be reminded of. 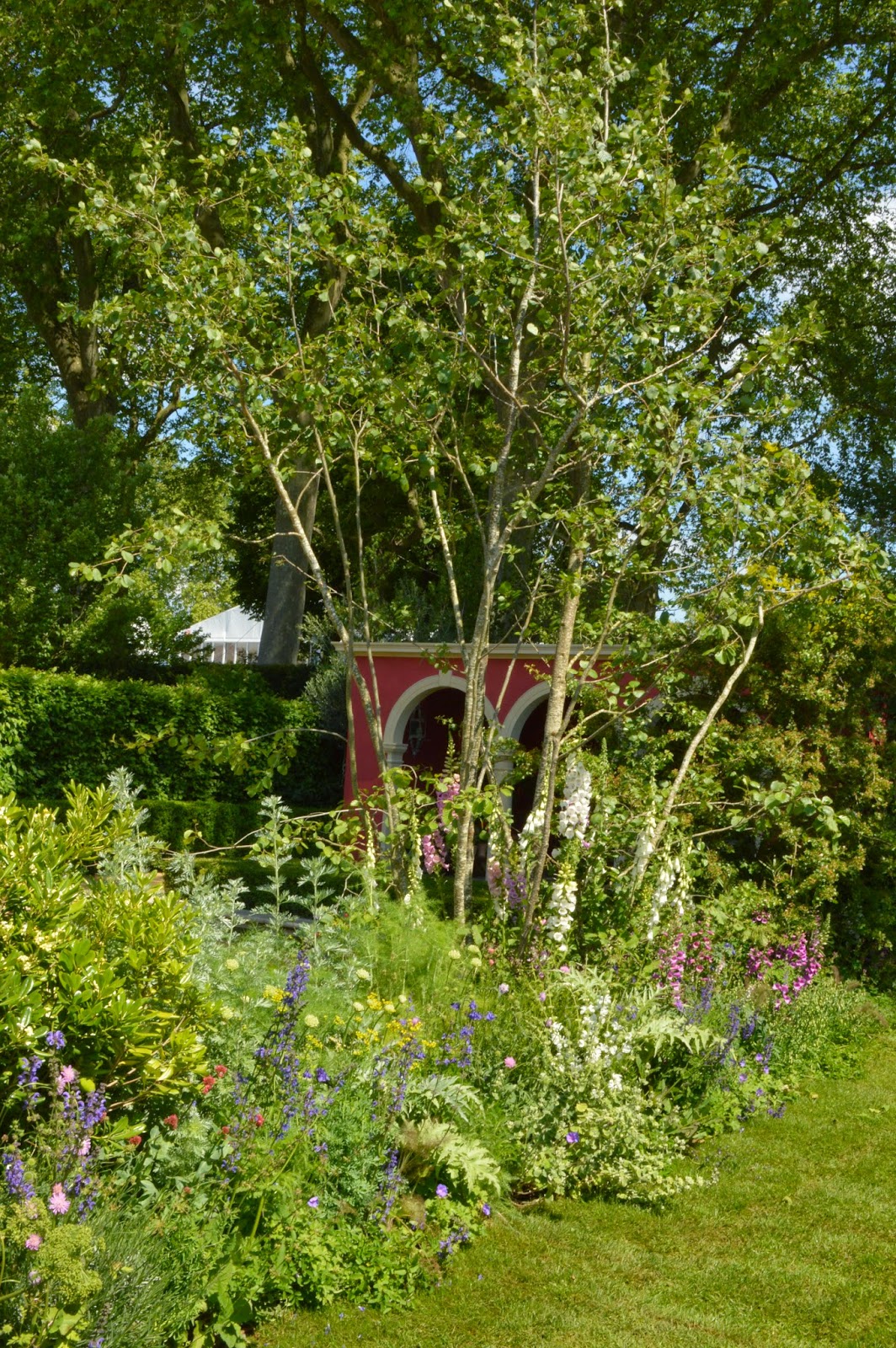 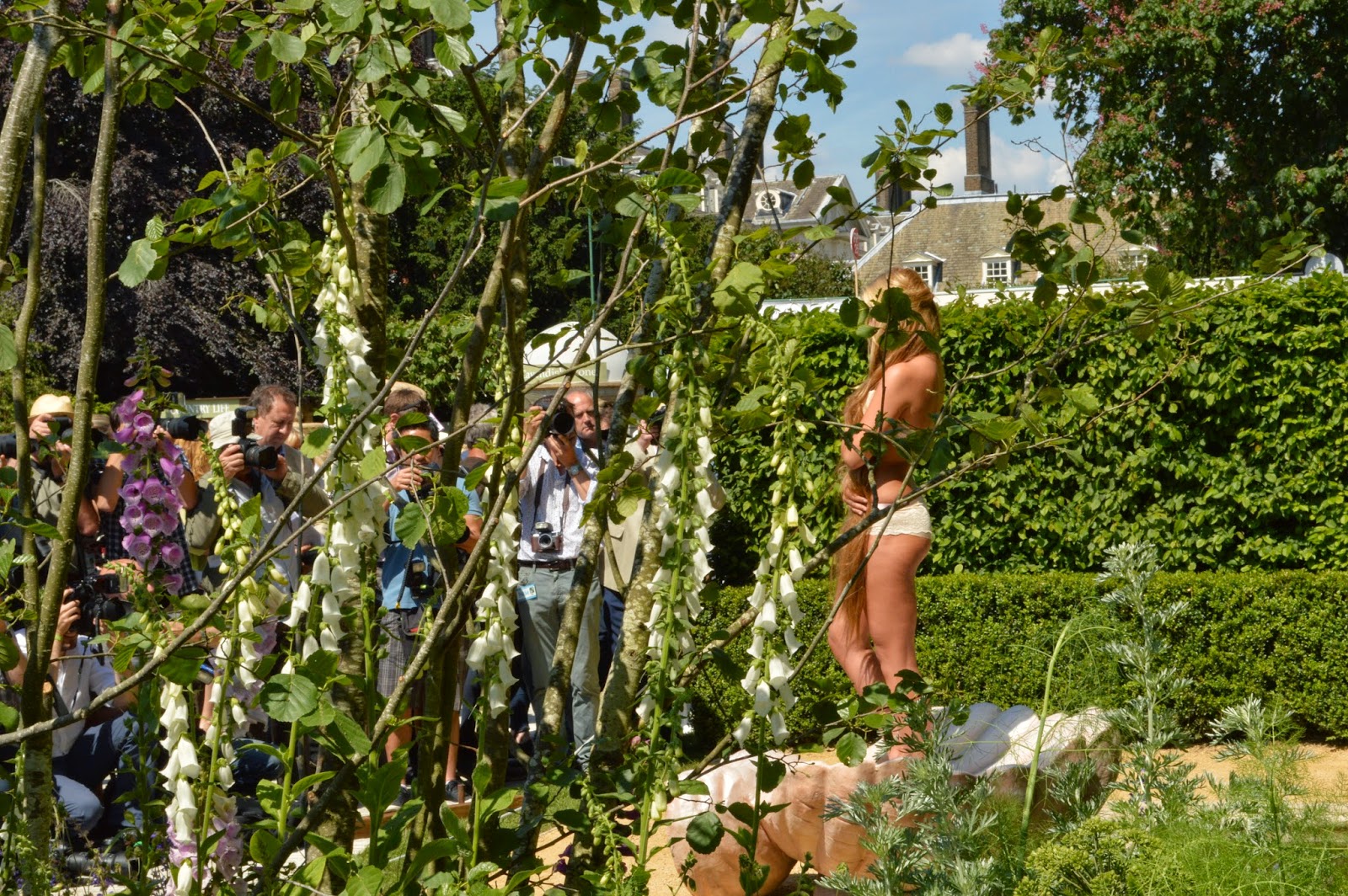 a scantily clad lady appeared on a shell, from the front I think she was meant to look like Venus emerging from the sea a la Titian, sadly from the side this vision was a little lost.  The garden received a bronze, which seemed a bit sad really.

Moving on now to the Best in Show designed by Luciano Giubbilei, the Laurent-Perrier Garden.  The garden was planted in sections with clear clean lines making up rectangles and squares.  When I visited the show on Wednesday my wise friend commented to me that it looked like a corporate garden, the sort of thing you would find in a courtyard of a large business. 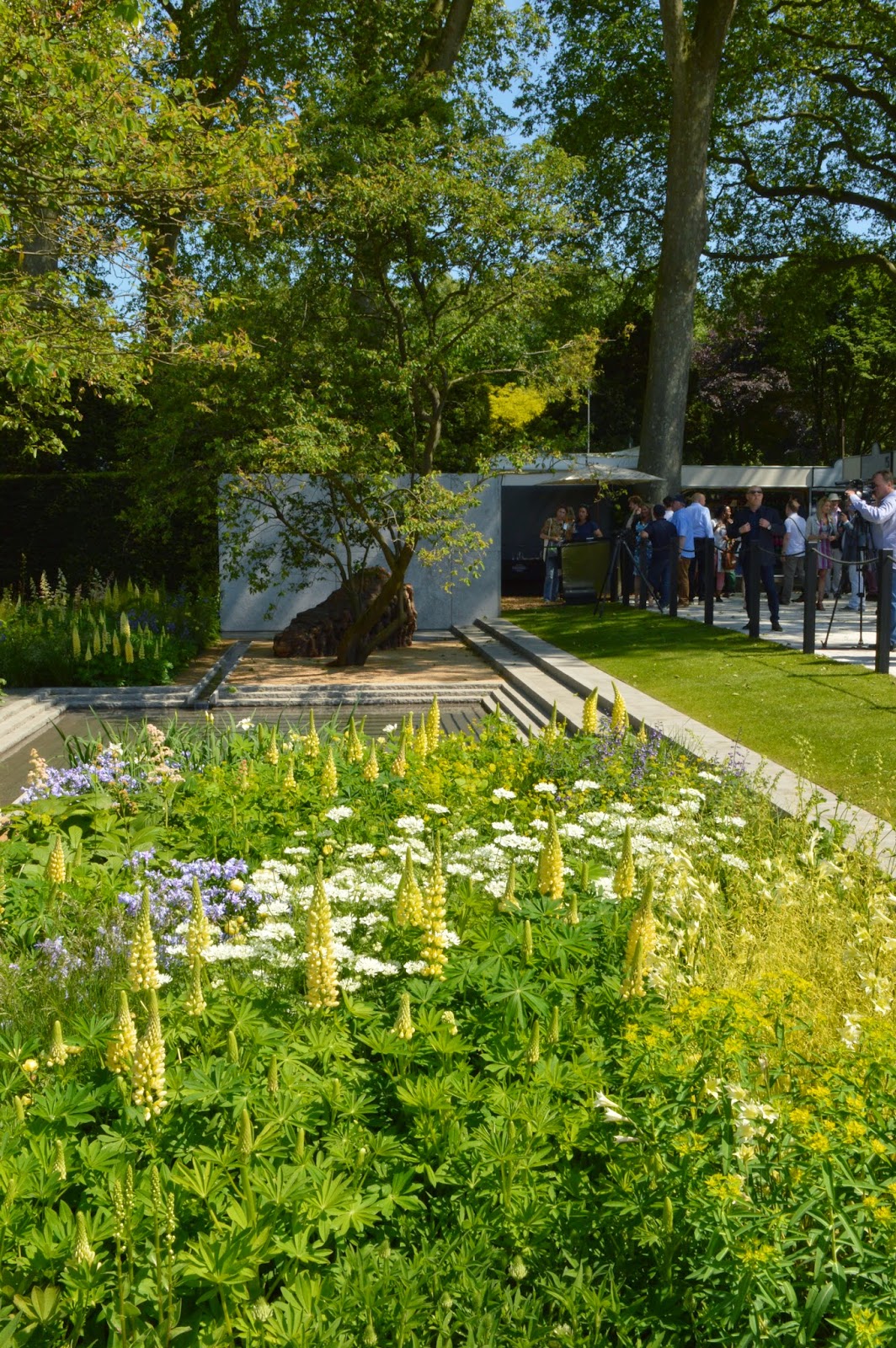 This was not said as a criticism, but an observation and one that I could only agree with.   Indeed, what a fantastic garden it would be in the heart of a major city as a sign of corporate greening. 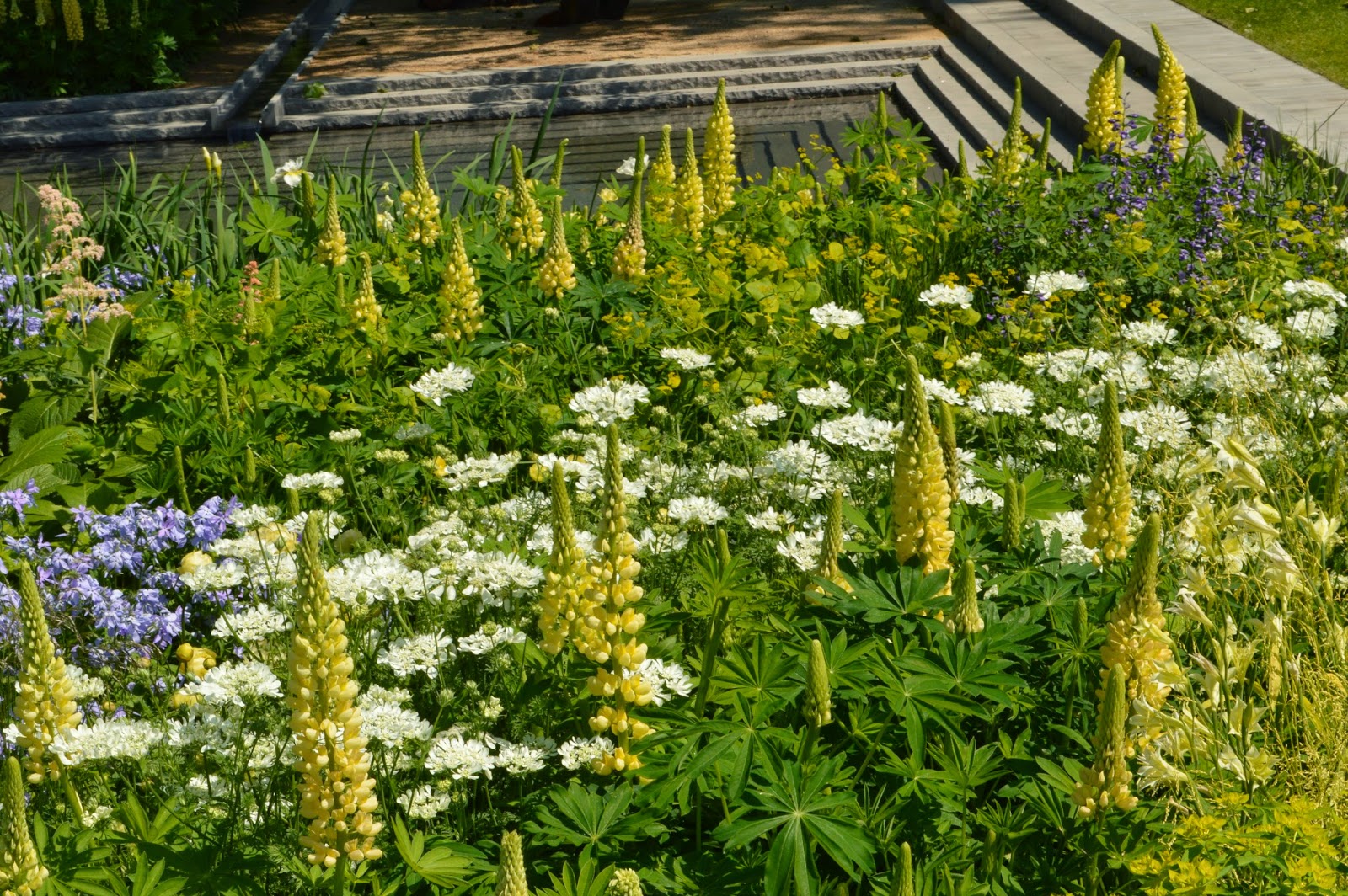 The planting was superb, just superb.  If there is not a craze on yellow/cream lupins now I shall eat my hat!  Yellow, a colour disliked by many gardeners, is clearly the new black (or should I say Patty's Plum?) 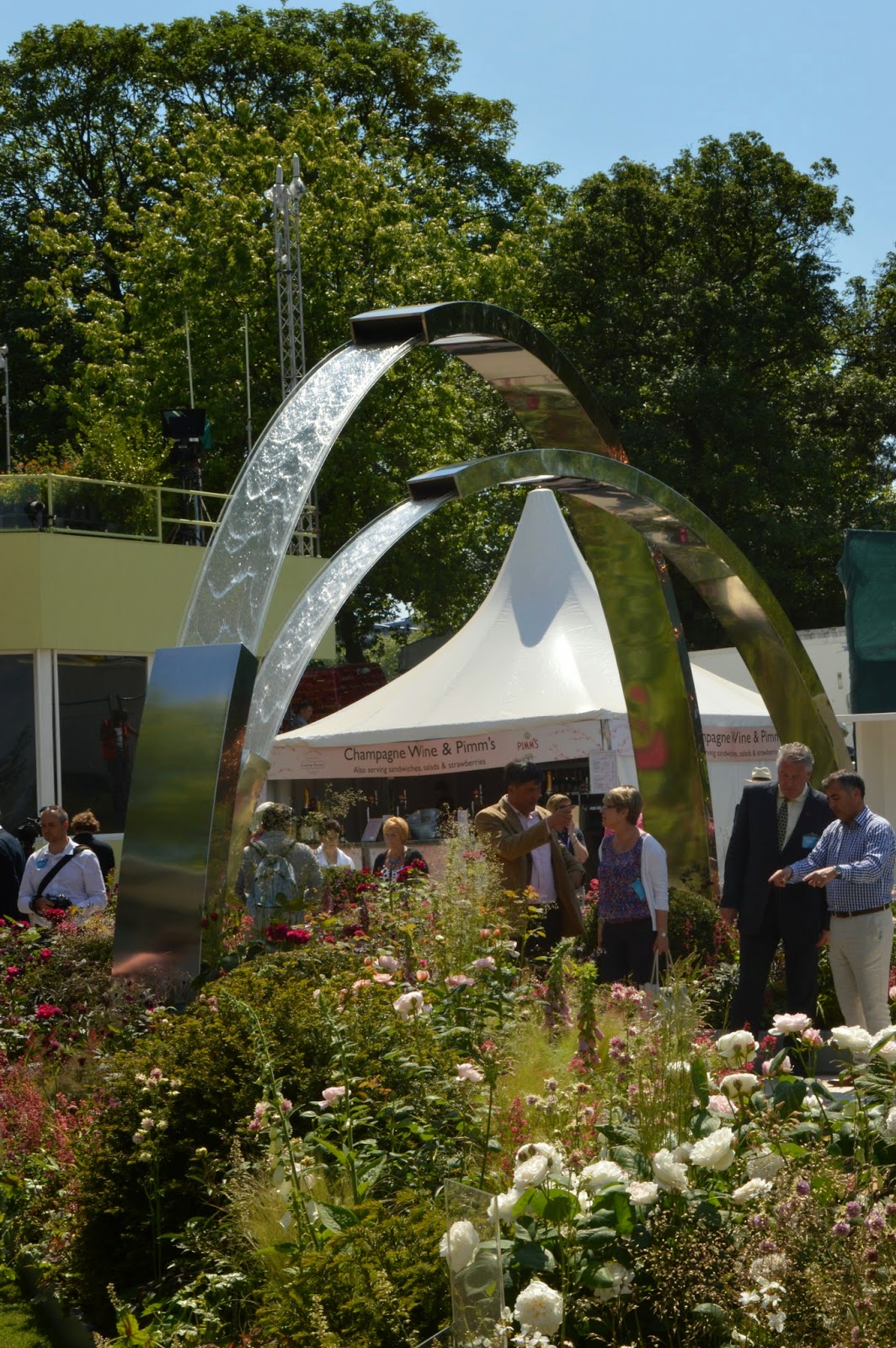 One of my favourite gardens was this one, Positively Stoke-on-Trent, designed by Bartholomew Landscaping. 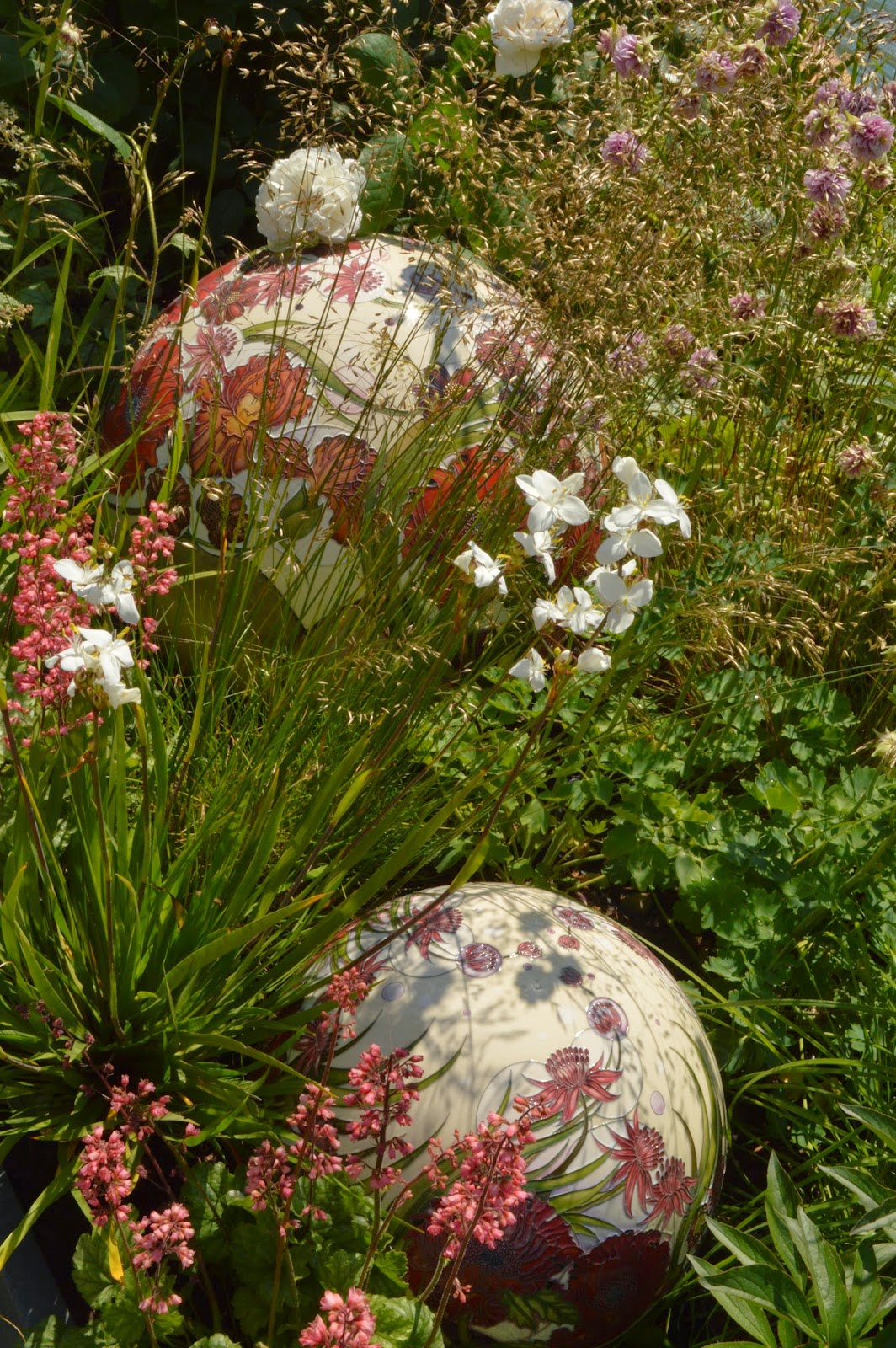 These Moorcroft balls matched the planting perfectly and were a fantastic touch, 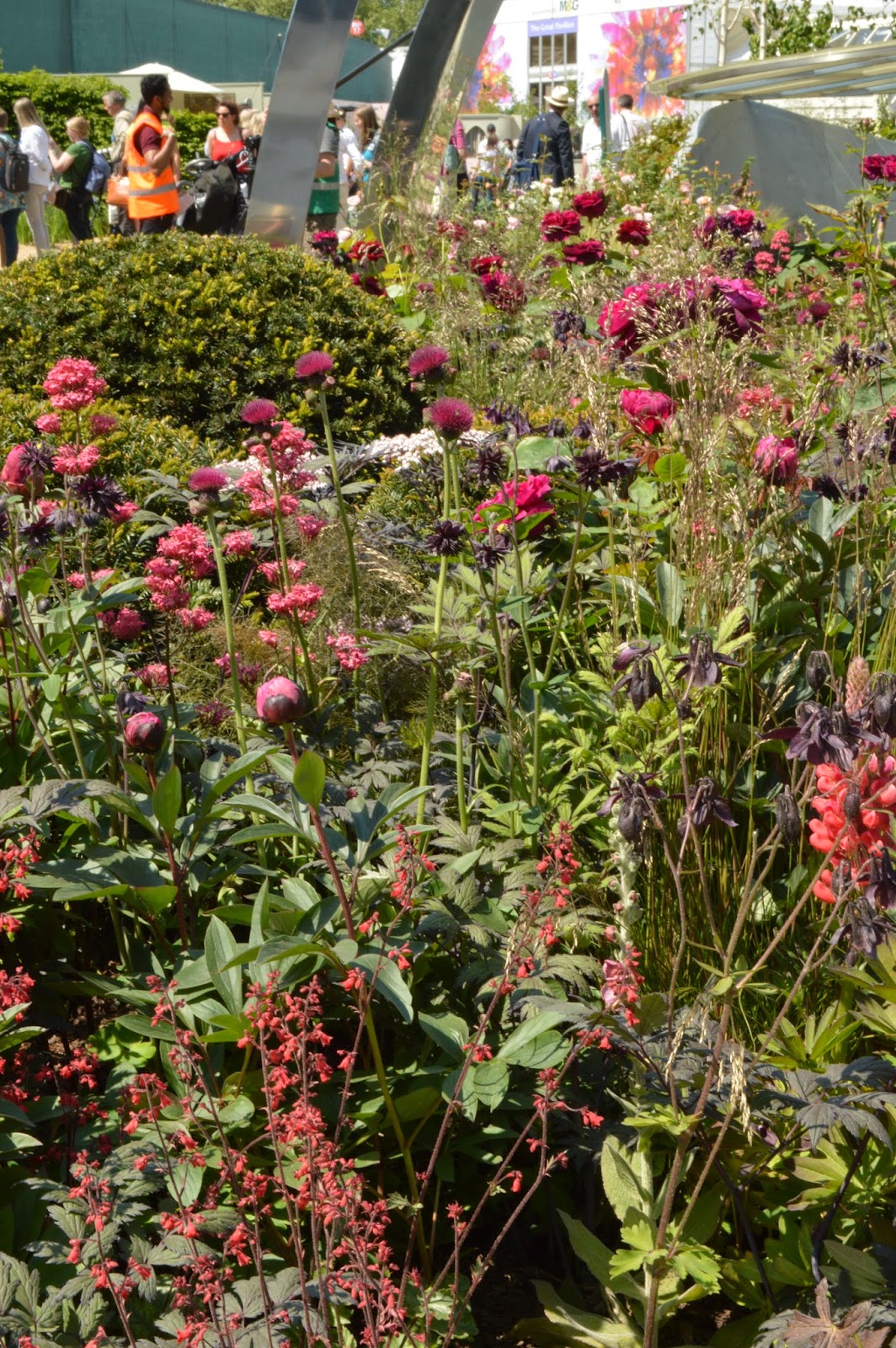 but the planting itself is some of the best planting in the show in my opinion.  The colours used and range of plants was second to none, and yet it only received Silver-gilt and seems to have had far less television coverage than some other gardens.  What a shame. 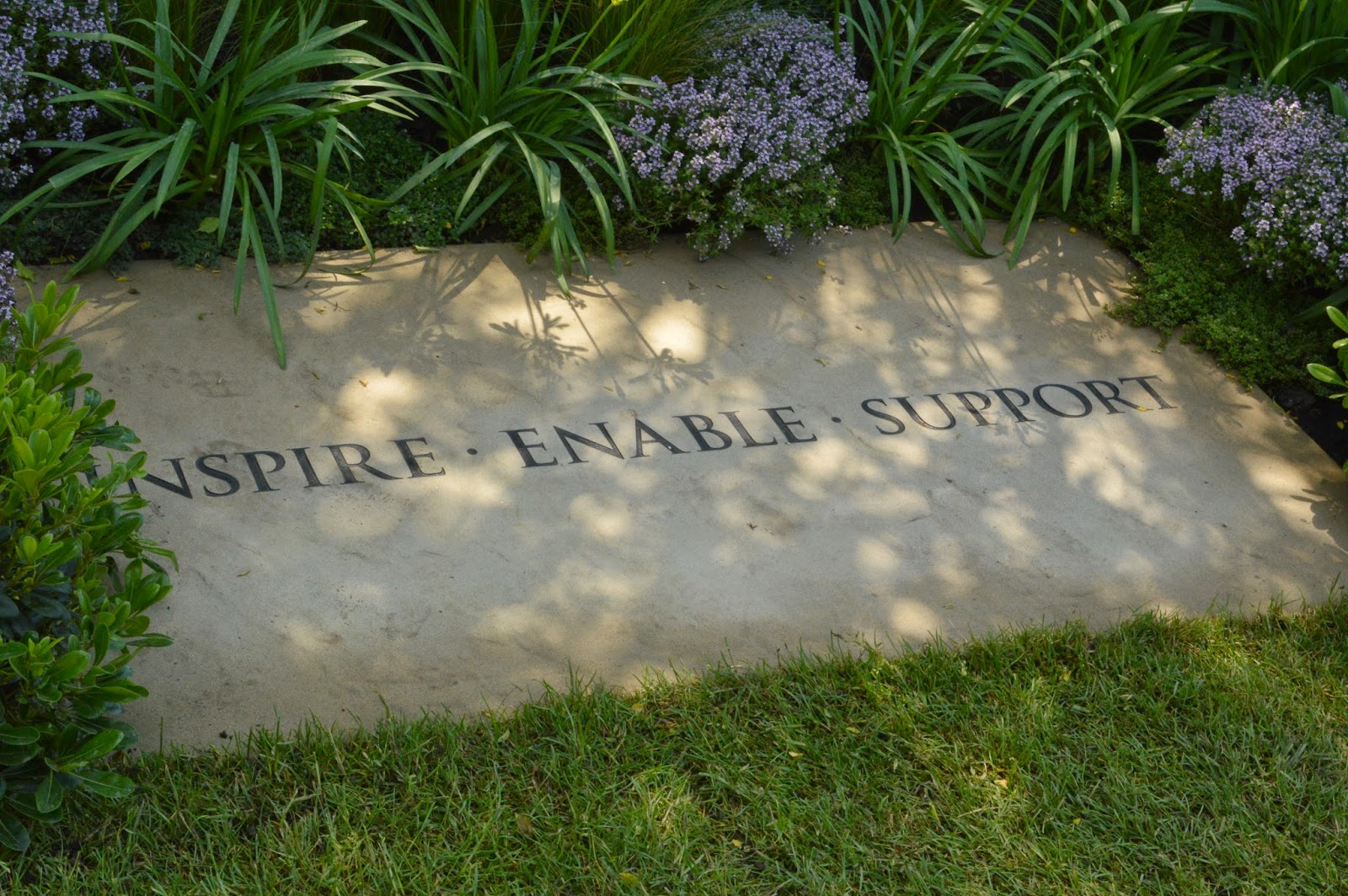 Lastly for this post, the Hope on the Horizon Garden, designed by Matt Keightly, a quite personal garden for Matt as he has linked the garden to his brother who is in the armed forces. 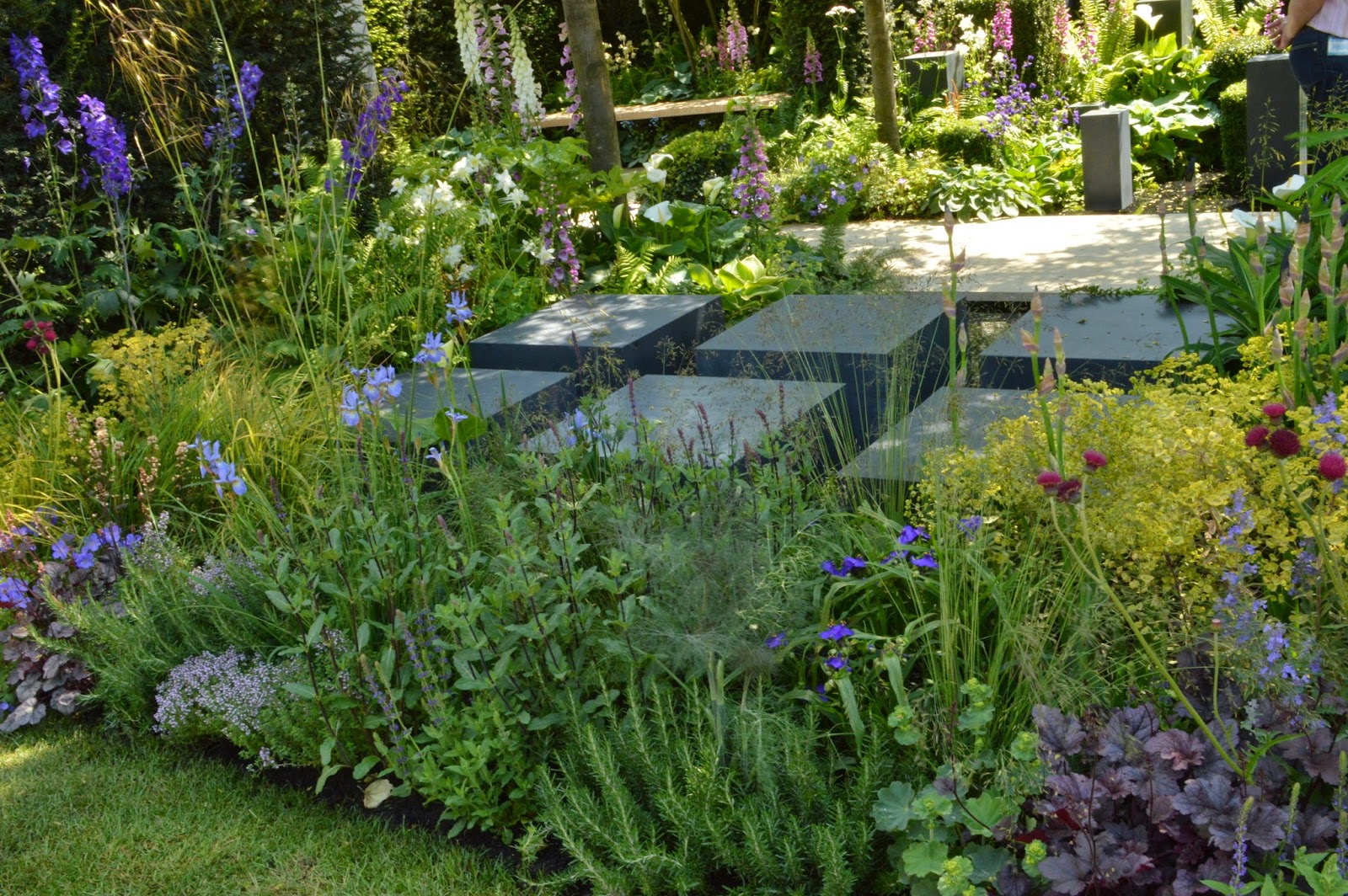 The planting was just wonderful and the hardscaping did not dominate. 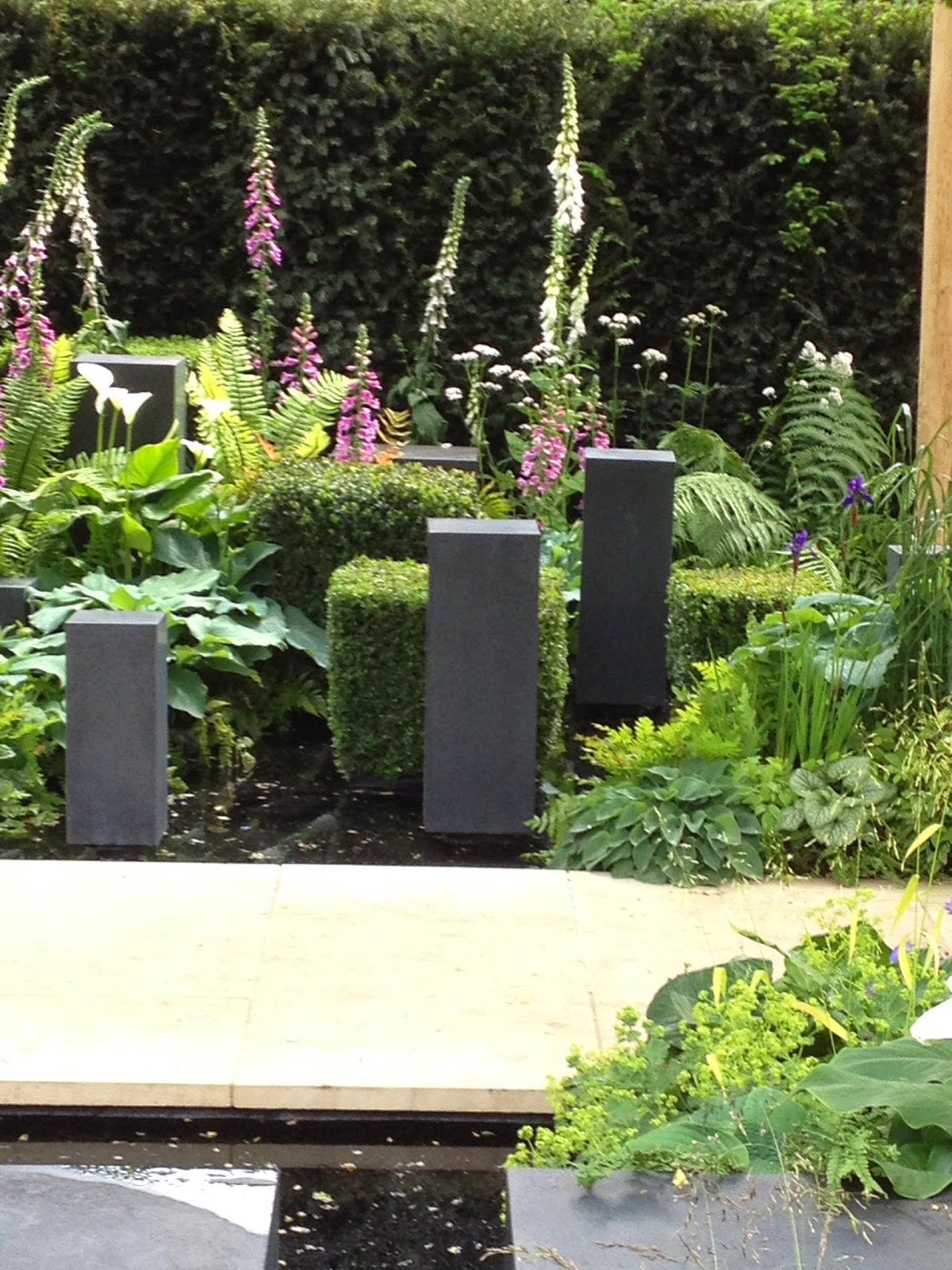 This is my favourite bit, I heard Matt talk about it on the BBC coverage as he likened the Box seemingly growing in the water as impossible and how that linked to the seemingly impossible task of some soldiers getting onto the road to recovery.  This simple metaphor was incredibly strong and raised it head and shoulders above its rivals, yet it received only a silver gilt medal.  Very much a shame.

I leave you with a shell encrusted dinosaur head...... 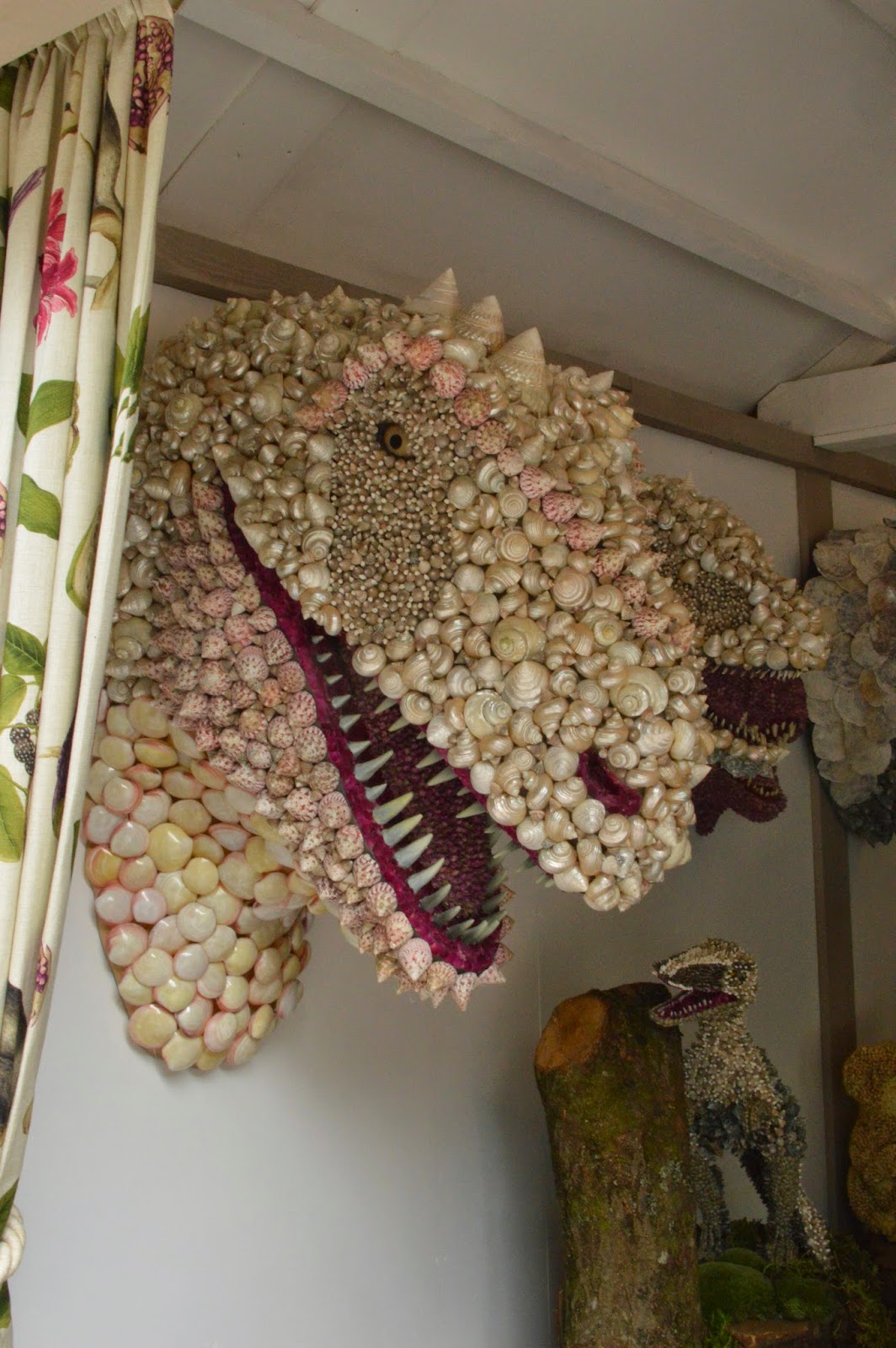