May 26, 2014
I have spent the last few years sharing my garden with you, but there is one part of the garden I have never shown, I am not sure I have ever even alluded to it either, the driveway.

The driveway has been growing wild for as long as I have lived here, and to be honest I think as long as anyone else has lived here too.  It is mainly blackberries, the odd wild rose and very tall nettles.  There is a conifer at the end near the lane and various self sown hawthorns and sycamores.  When I first moved in I planted a few crocii and snowdrops which still flower merrily away now, but otherwise I had the garden to deal with, the driveway could wait.

It has waited, very patiently, but suddenly I have been spurred into action.  The brambles that lead up to the lane have suddenly developed a gap in them.  This is not a huge worry really, but people could use it as a cut through and I realised I was worrying about it.  Life is to short to worry about things, so I decided I had to sort it out. 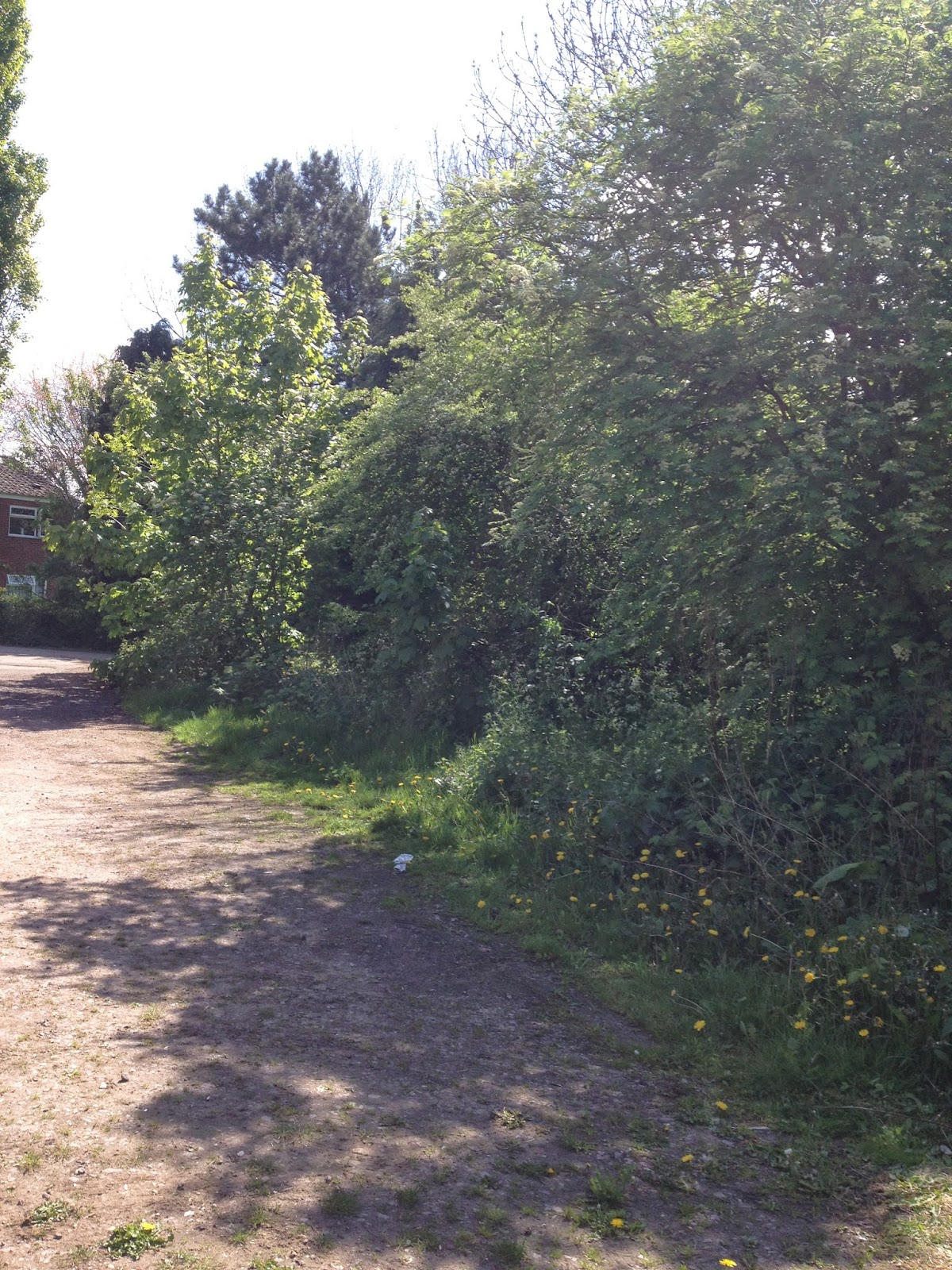 I had some mesh fencing left over from sorting out the side boundary of the back garden last Autumn, I wasn't sure how much I had but I knew it was enough to at least fill that gap.  I also knew the timing was not great, the brambles and nettles are on their way up now so it would be a painful job.  I ordered some fence posts and waited for their arrived.

I spent a happy day getting ripped to shreds sorting out the gap and then fencing along as far as I could.  I found the remains of the original fence which I used as a guide.  I managed to fence along with about 6 metres to go when I ran out of fencing and posts.  This was annoying but it was tiring work and I was badly scratched and nettle stung by that point so a rest seemed good. 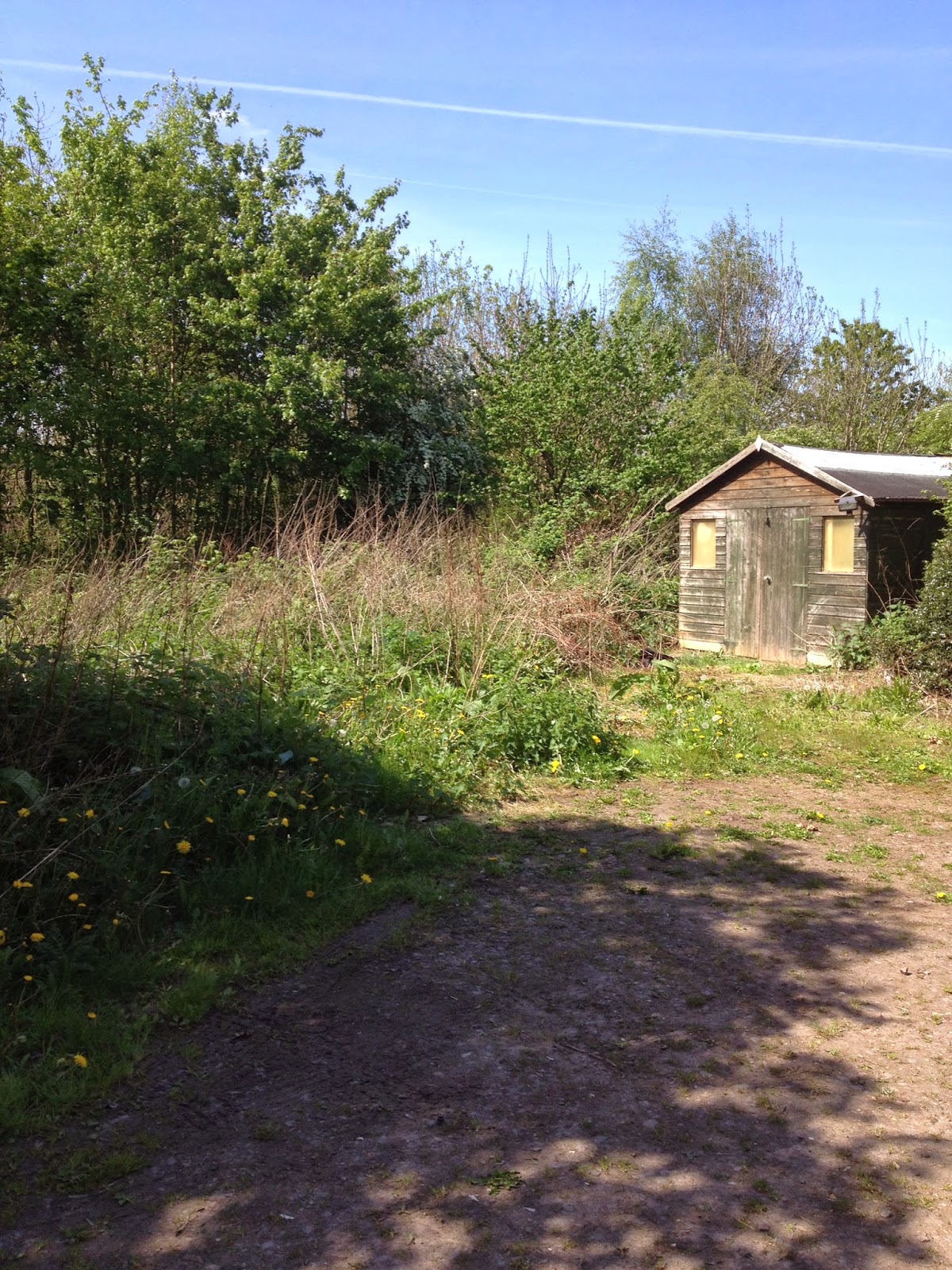 As I fenced along though I was thinking.  I have known that this area needed attention and now seems the perfect time to get planning.  I cannot plant much really until Autumn as I am thinking mainly wild roses and some trees.  Be certain this planting will include a larch, I have been hankering after a larch for sometime but there is no space in the back garden, the front drive way is perfect for one.  The first tree has actually been bought for the new planting. Yes it is a bit premature and not a good time of year for planting trees either as said above, but I was on a tour of Bluebell Arboretum and Nursery and this Pin Oak accidently demanded to be purchased.  It is so beautiful I could not refuse. 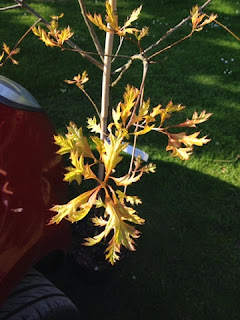 So, watch this space, there will be developments but not in a hurry, this is a long term project.  I have started to clear the nettles and brambles but this will take a while. I have thoughts of planting mop-head hydrangeas along the sides.  There is plenty of time to change my mind several times though before I can really start planting.

and yes, the shed needs painting and re-roofing, that is also on the sooner rather than later list!