A year on, a snowdrop return

February 23, 2014
I have visited Easton Walled Gardens a few times over the last year and snowdrop time has come around again so it felt appropriate to return. Now you could argue that once you have seen the snowdrops then you have seen them, lets face it they remain pretty much as they were, except a return visit gave me the ability to see more and to look again. 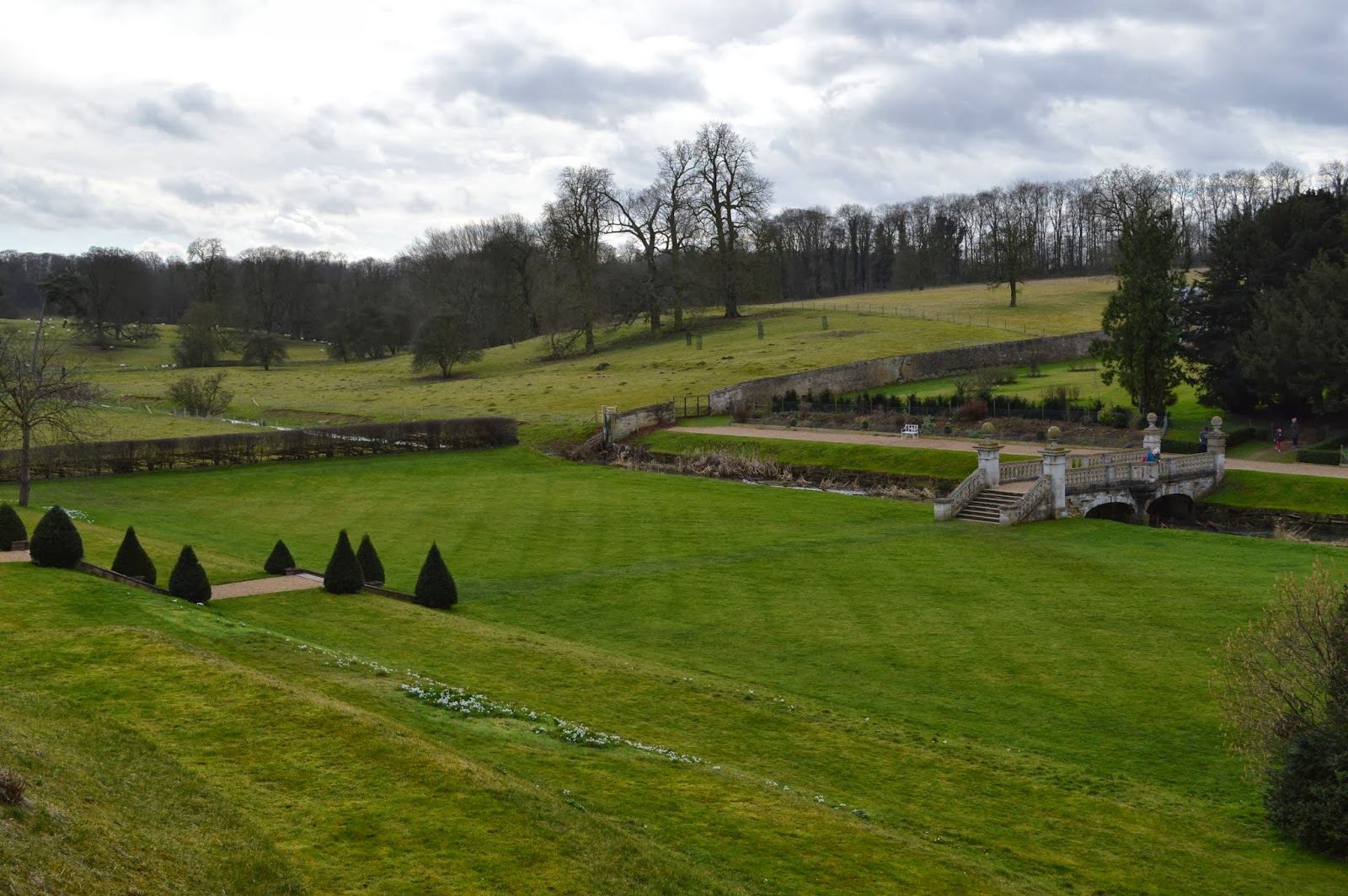 It was a bright, but breezy and a bit cold day, but it was bright and it was not raining and after the start to the year we have had I see the brightness (did I mention it was bright?) as a real bonus.  It was a good day for having a good wander and a chat and of course a promise of cake. 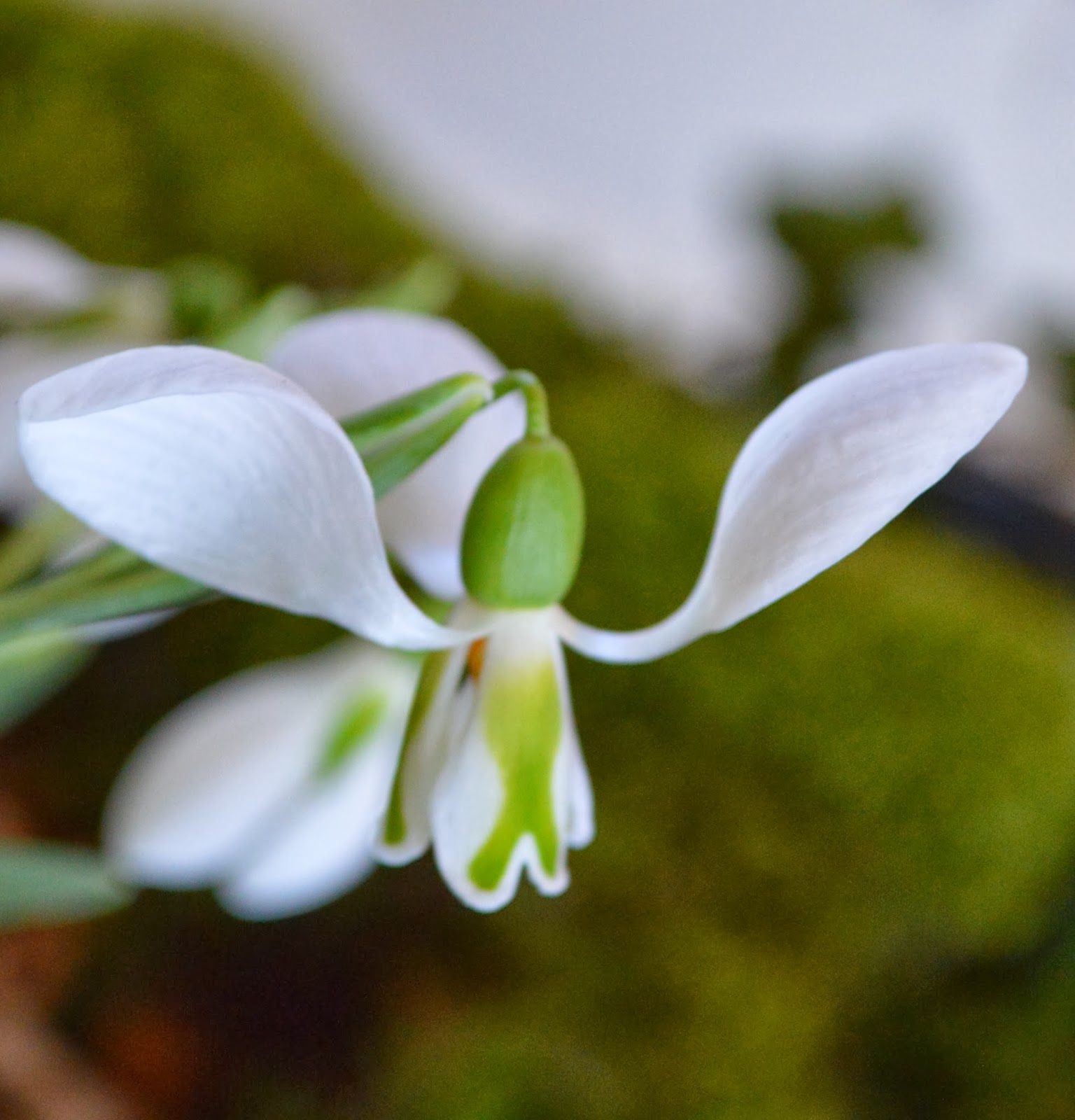 The first time I visited the gardens I just wanted to look at it all, I was very much looking at the 'big picture', this time I could focus down more.  Firstly we went to the snowdrop talk which was given by a local galanthophile.  The talk was standing room only there were so many people in there.  It was pitched at just the right level and the right length of time.  Not too long and not too complicated but informative and amusing.  I vaguely knew the connection between snowdrops and returning soldiers from the Crimean War, but this speaker also posed a theory that connected snowdrops arriving on this island as part of the celebration of the Christian festival of Candlemas. 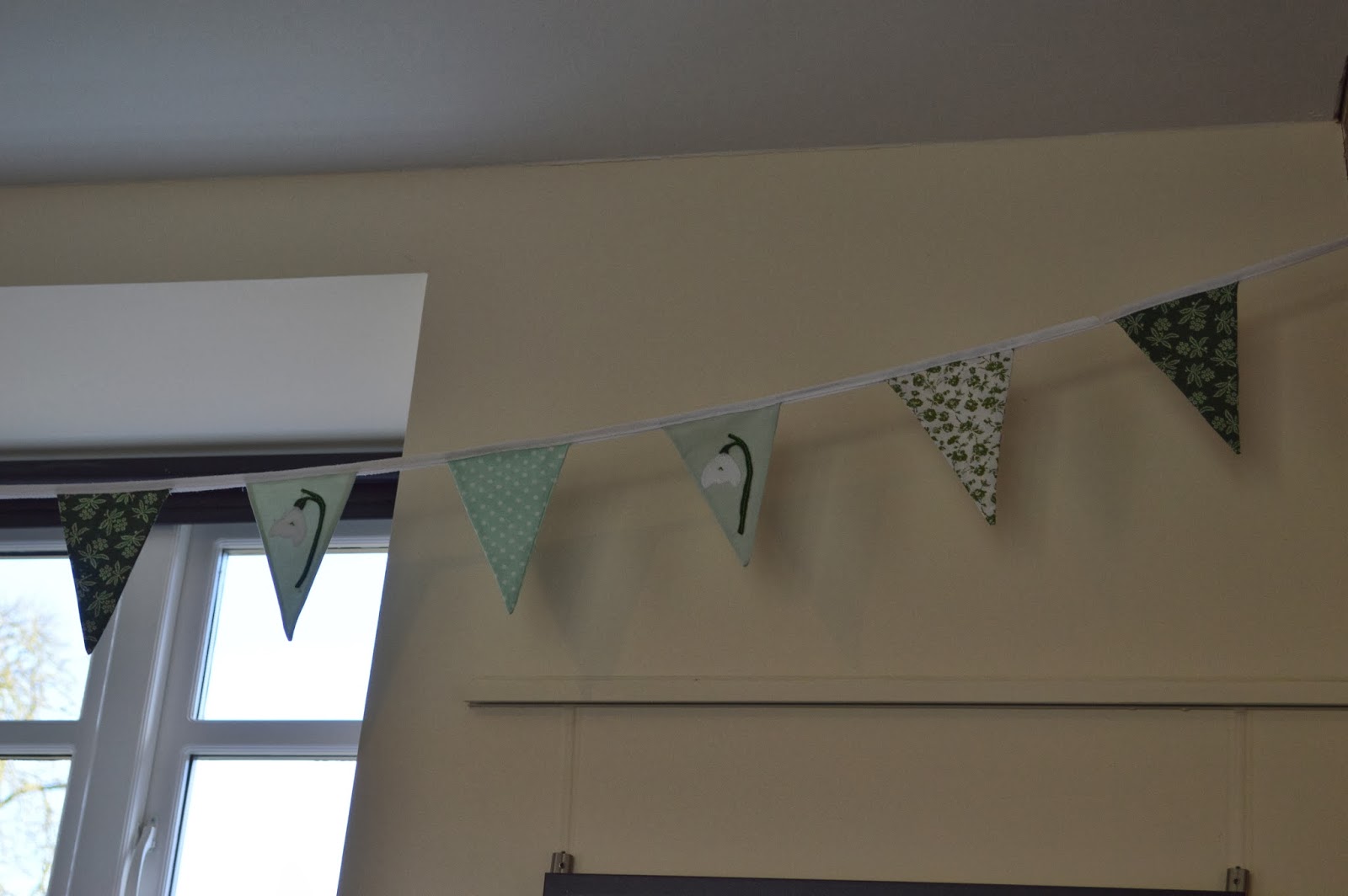 We rather liked the snowdrop inspired bunting. 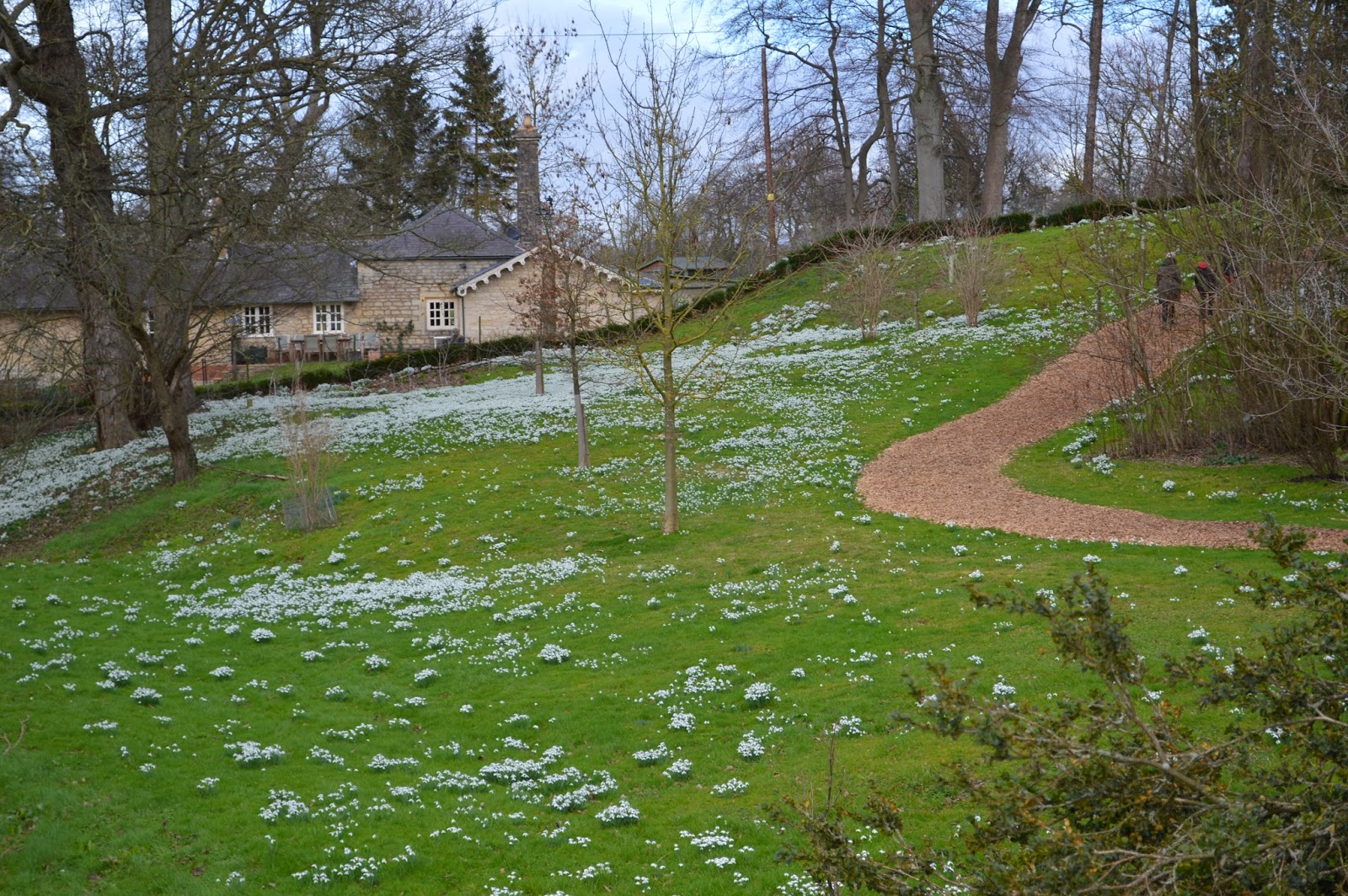 We were then let loose into the garden. 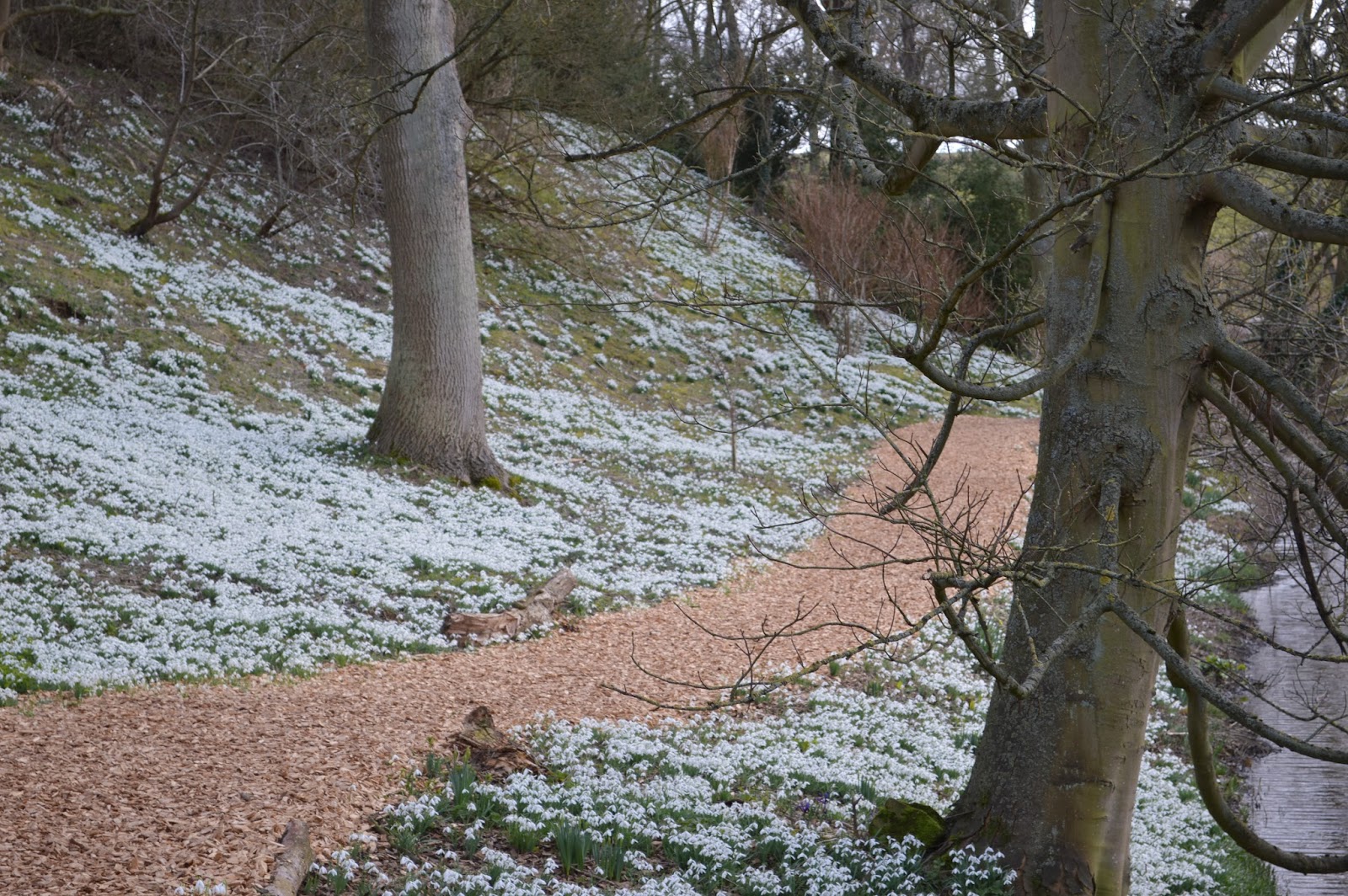 The swathes of snowdrops are beautiful, they do give the impression of light snow in places. 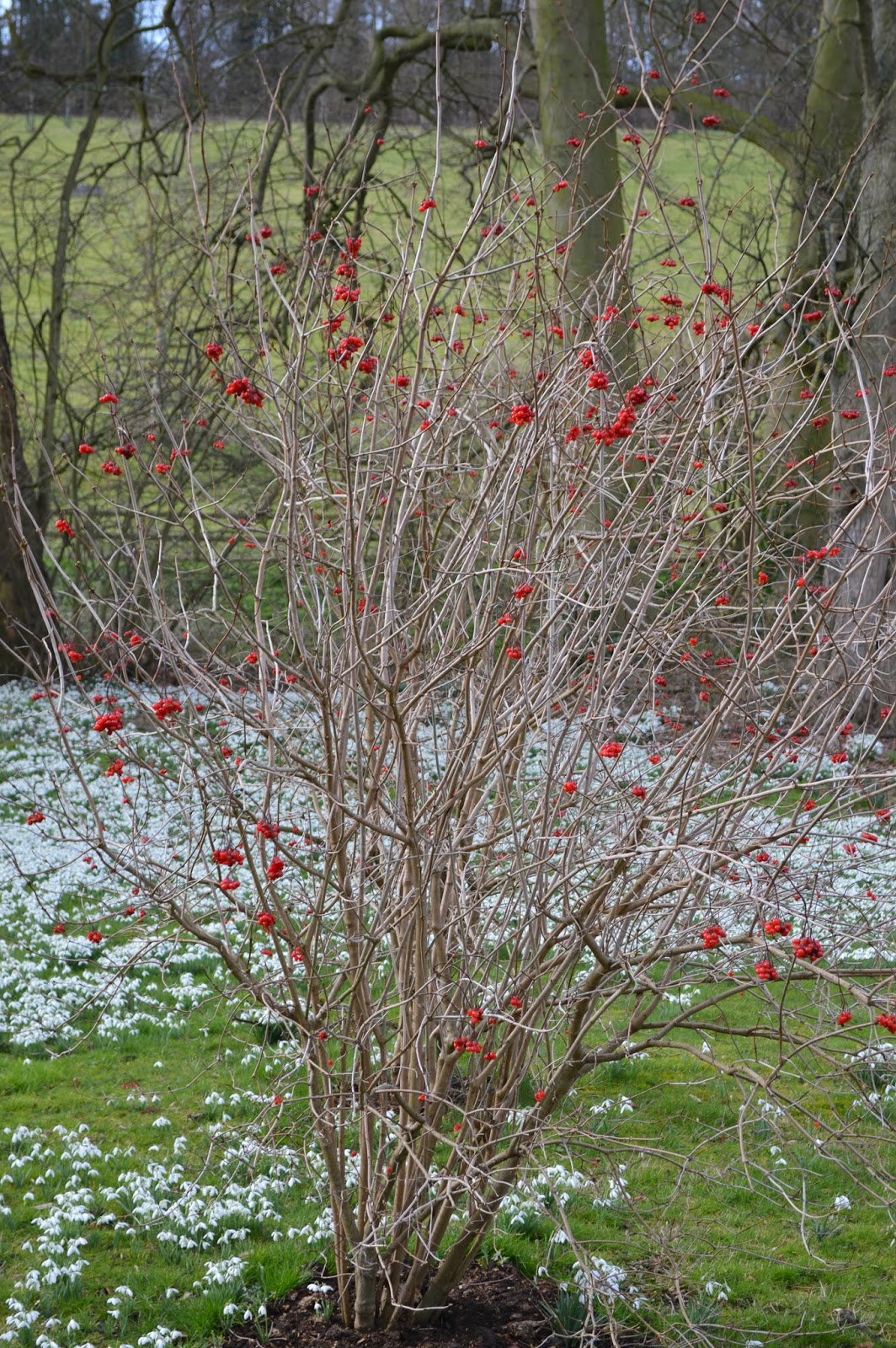 We loved these red berries set against the snowy background. 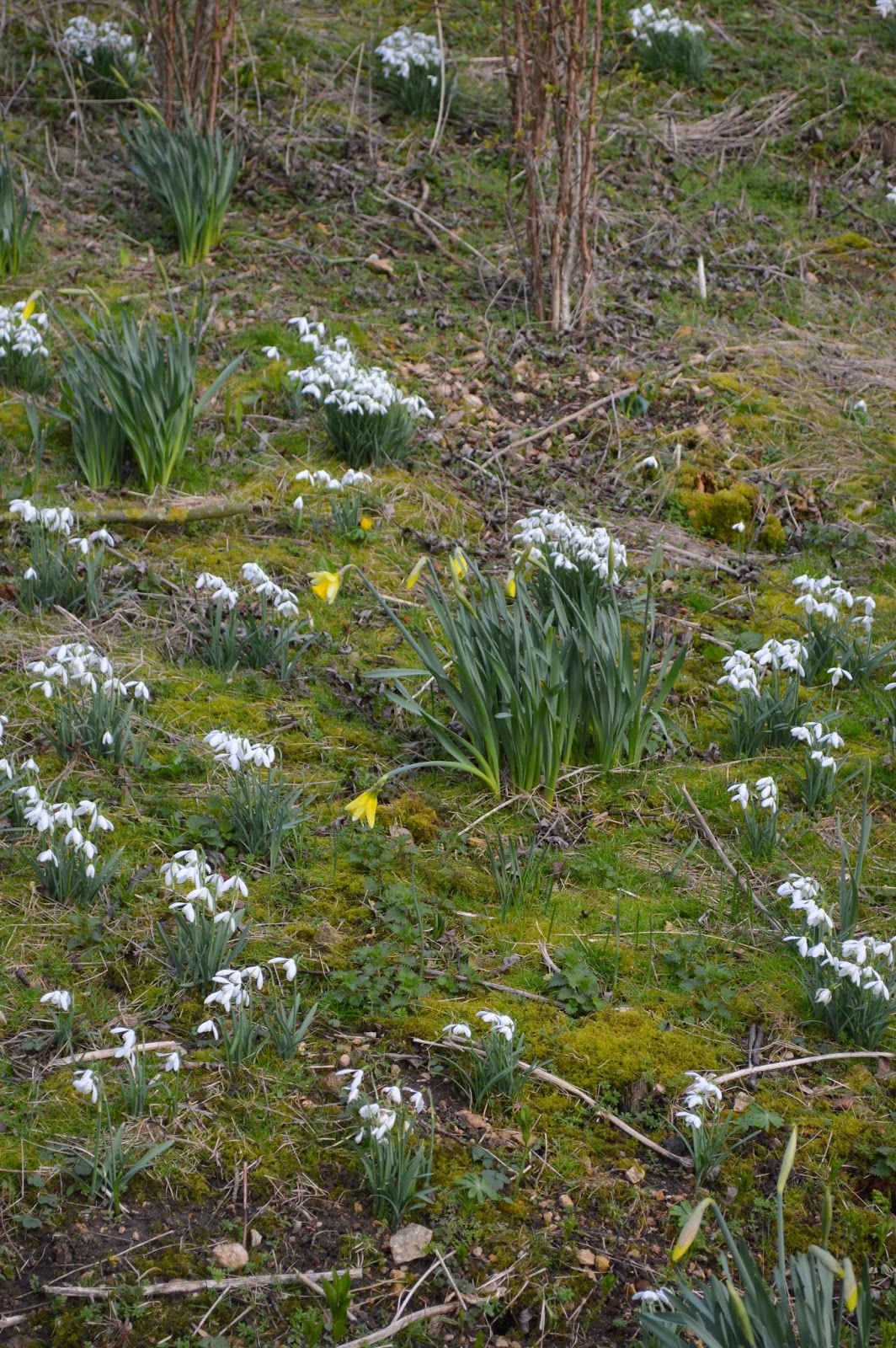 There were some early flowering daffodils giving some extra colour, 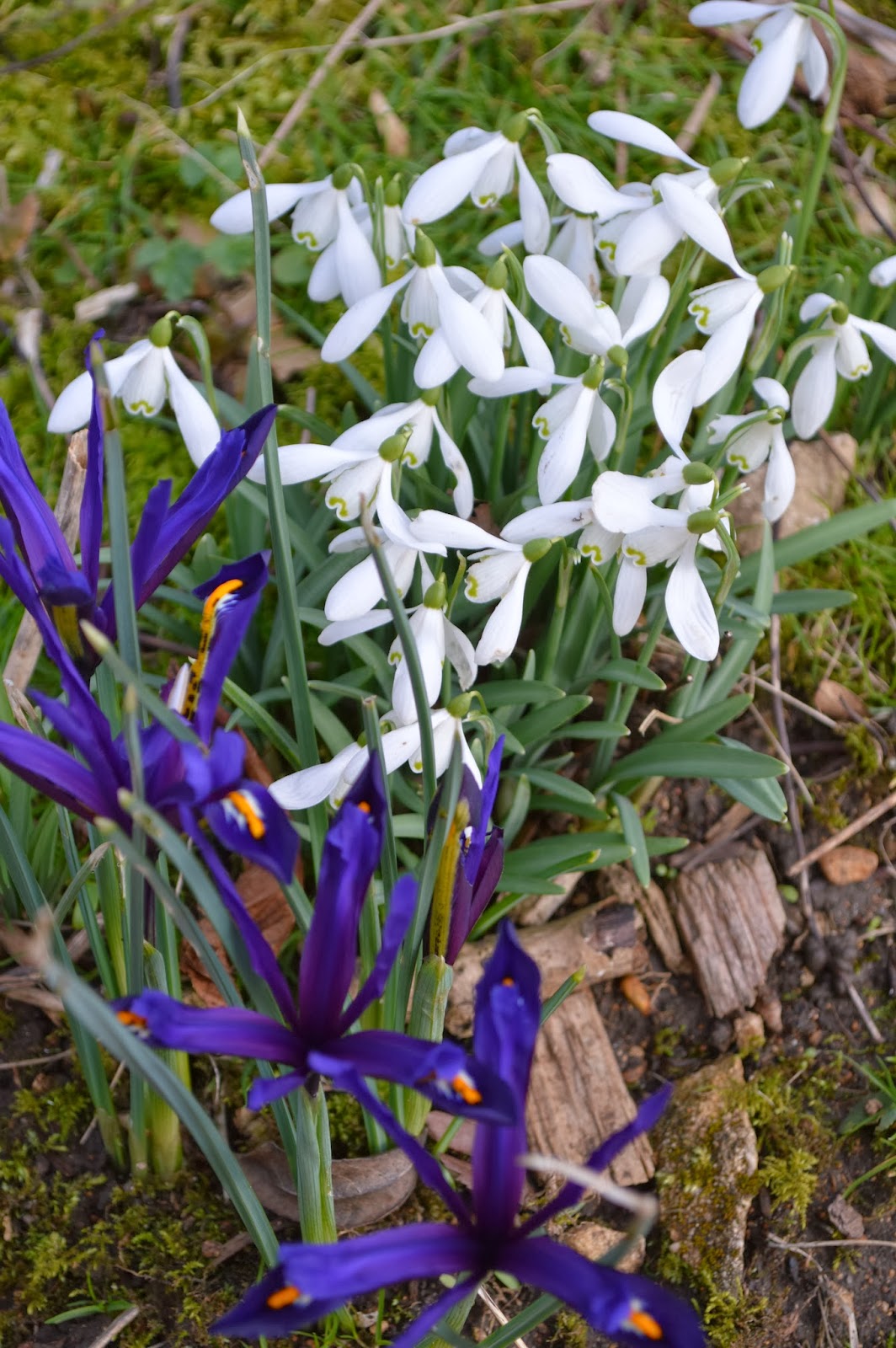 some purple irises were also making their presence felt. 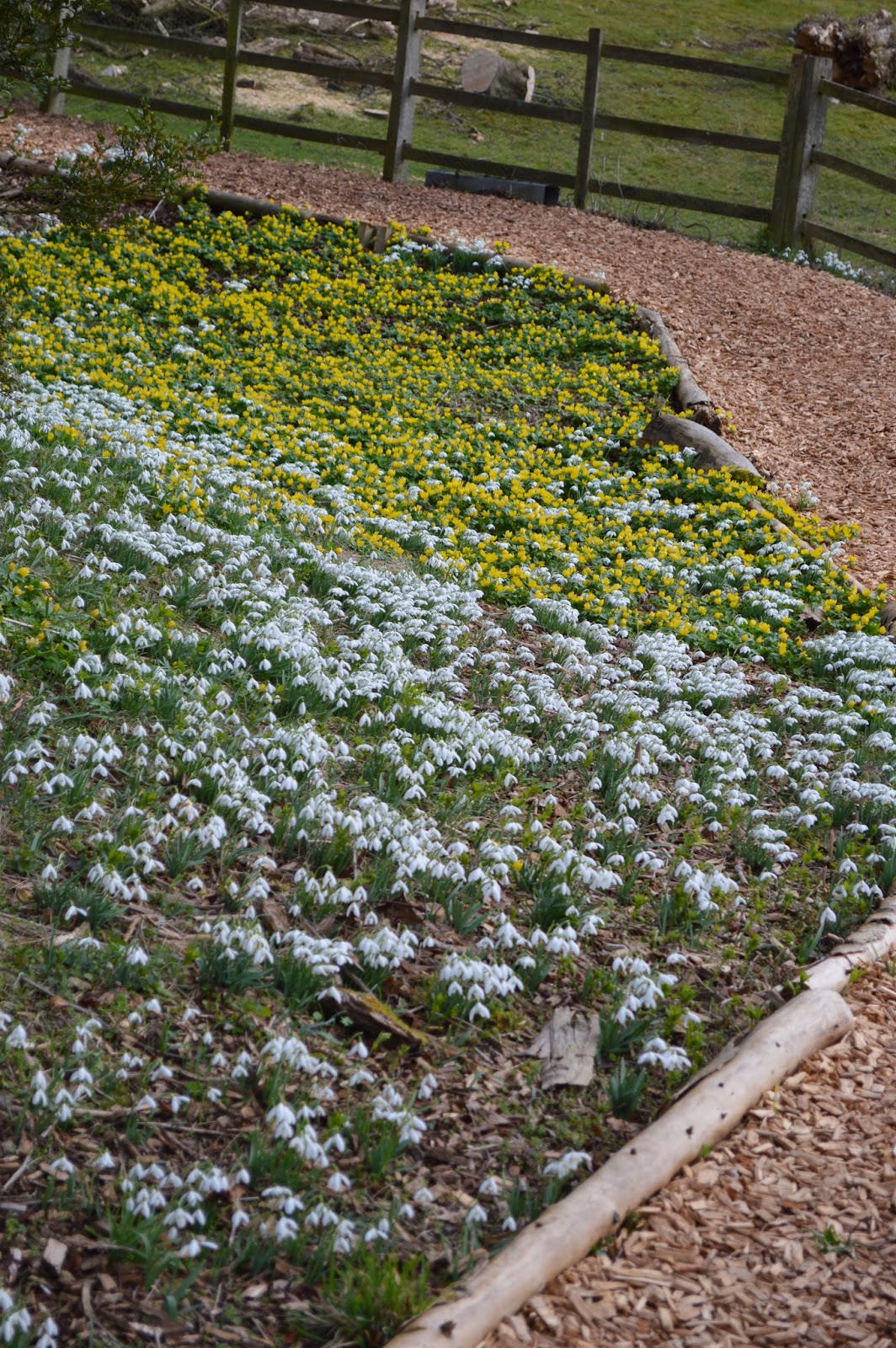 This moment as you wander along the path and suddenly the white turns to yellow as a sea of aconites starts to take over is just breathtaking. 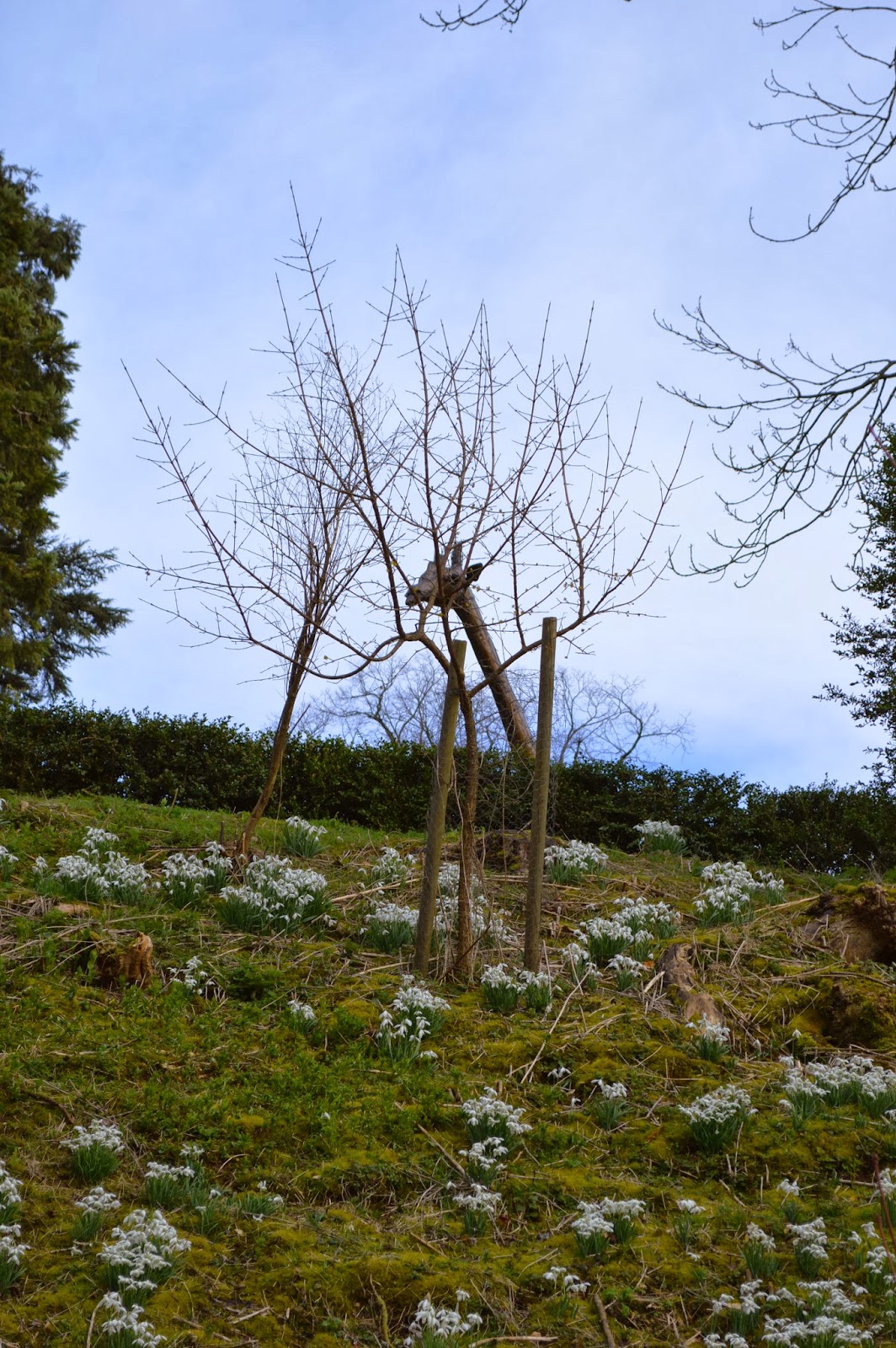 yet I did just feel a bit observed at times, you know that feeling that you are being watched? 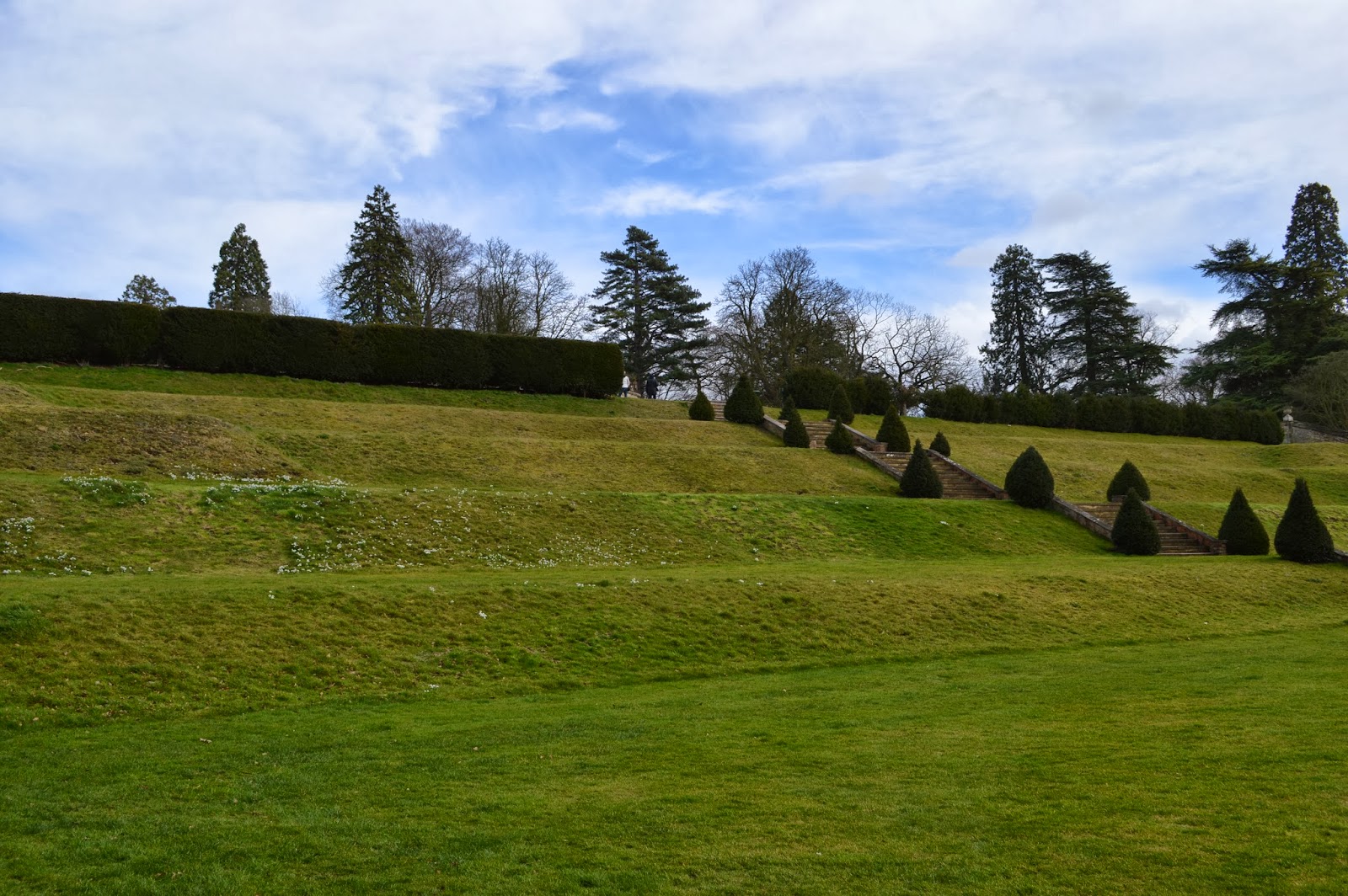 There are a lot of snowdrops at Easton.  Some made a break for freedom by scattering themselves up the terraces, 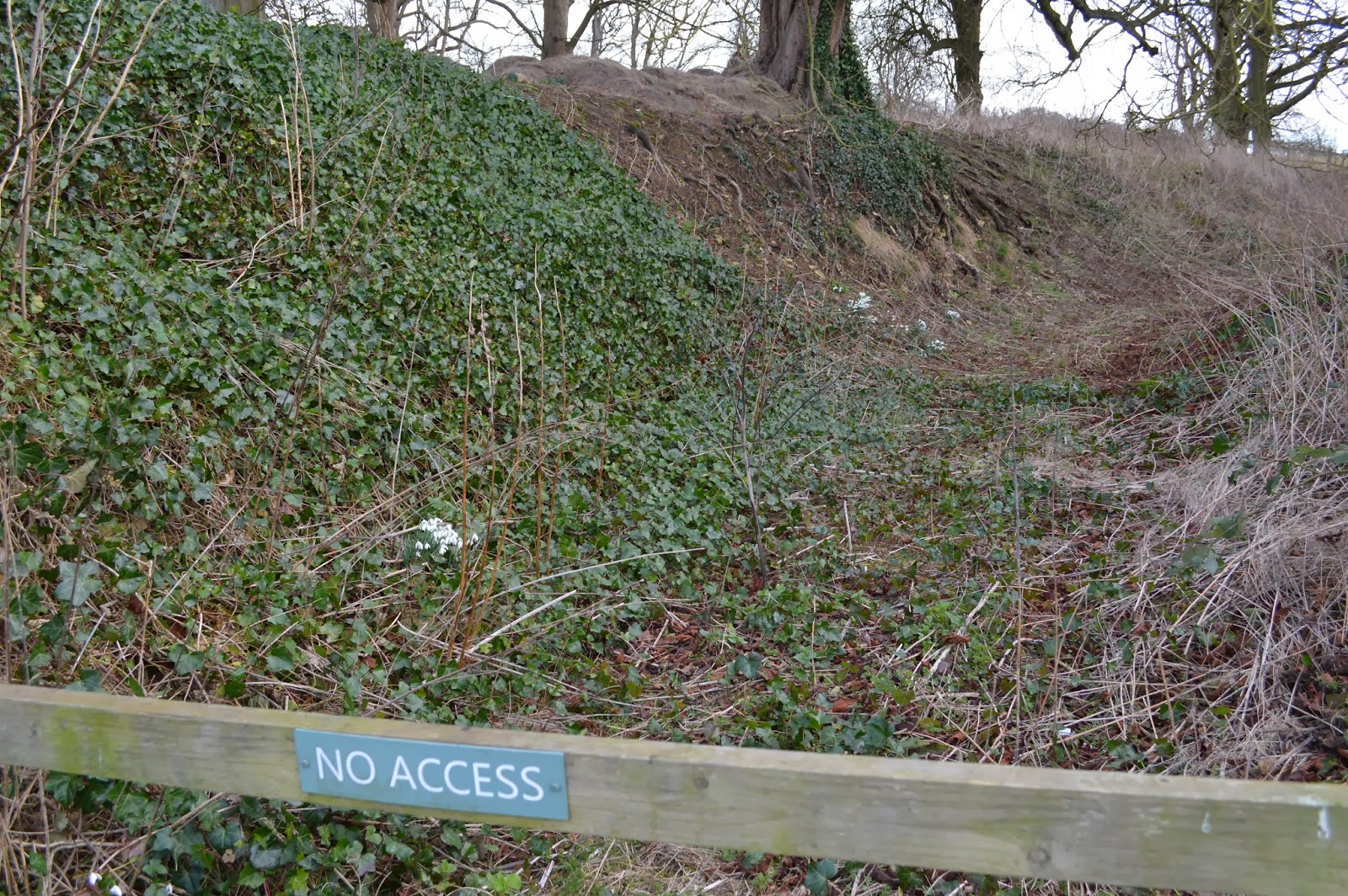 whereas as others had limboed under the gate, you could hear the theme from the Great Escape being whistled. 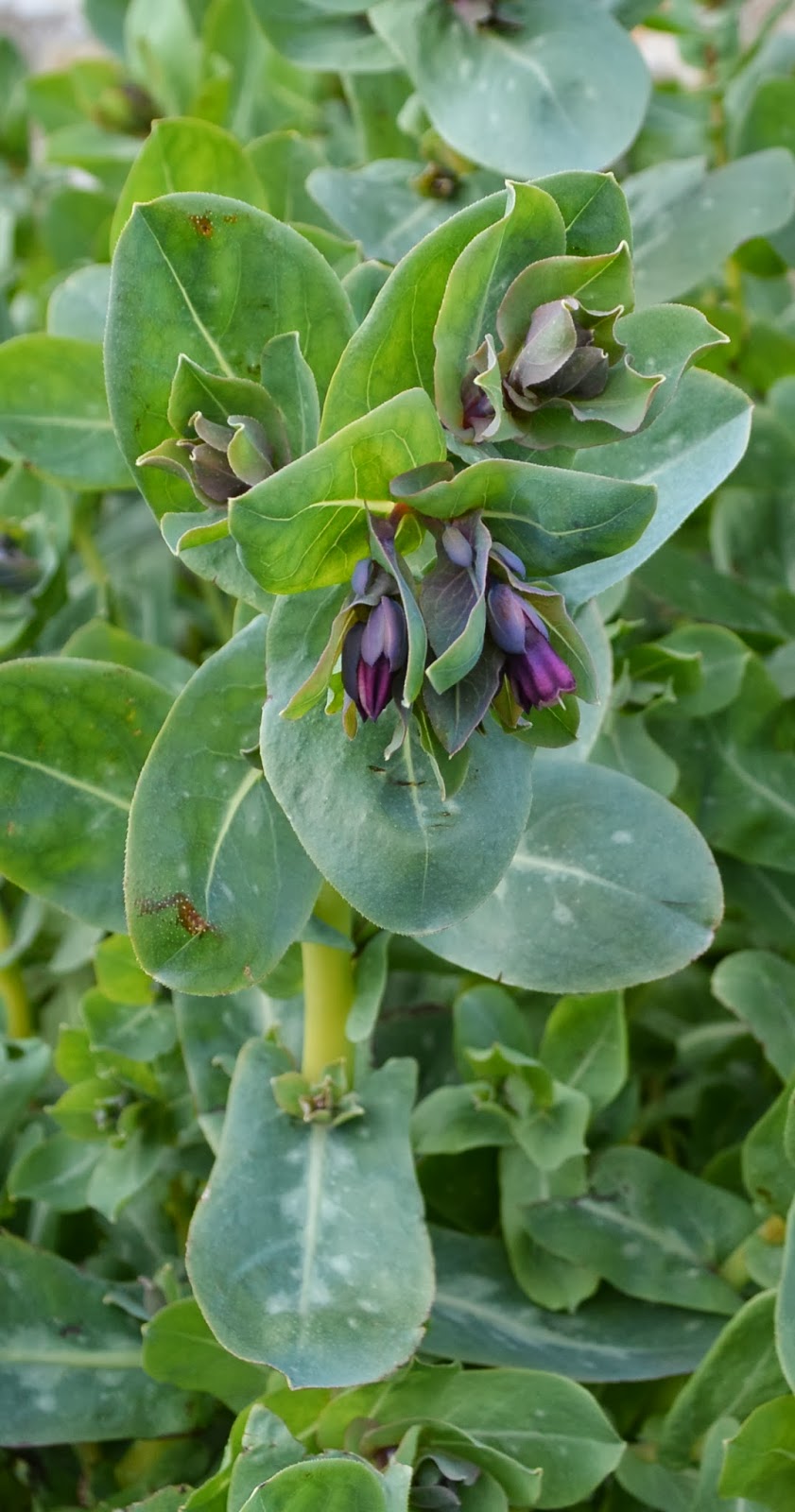 Meanwhile back in the garden, the evidence of the mild winter was clear from the flowering cerinthe. 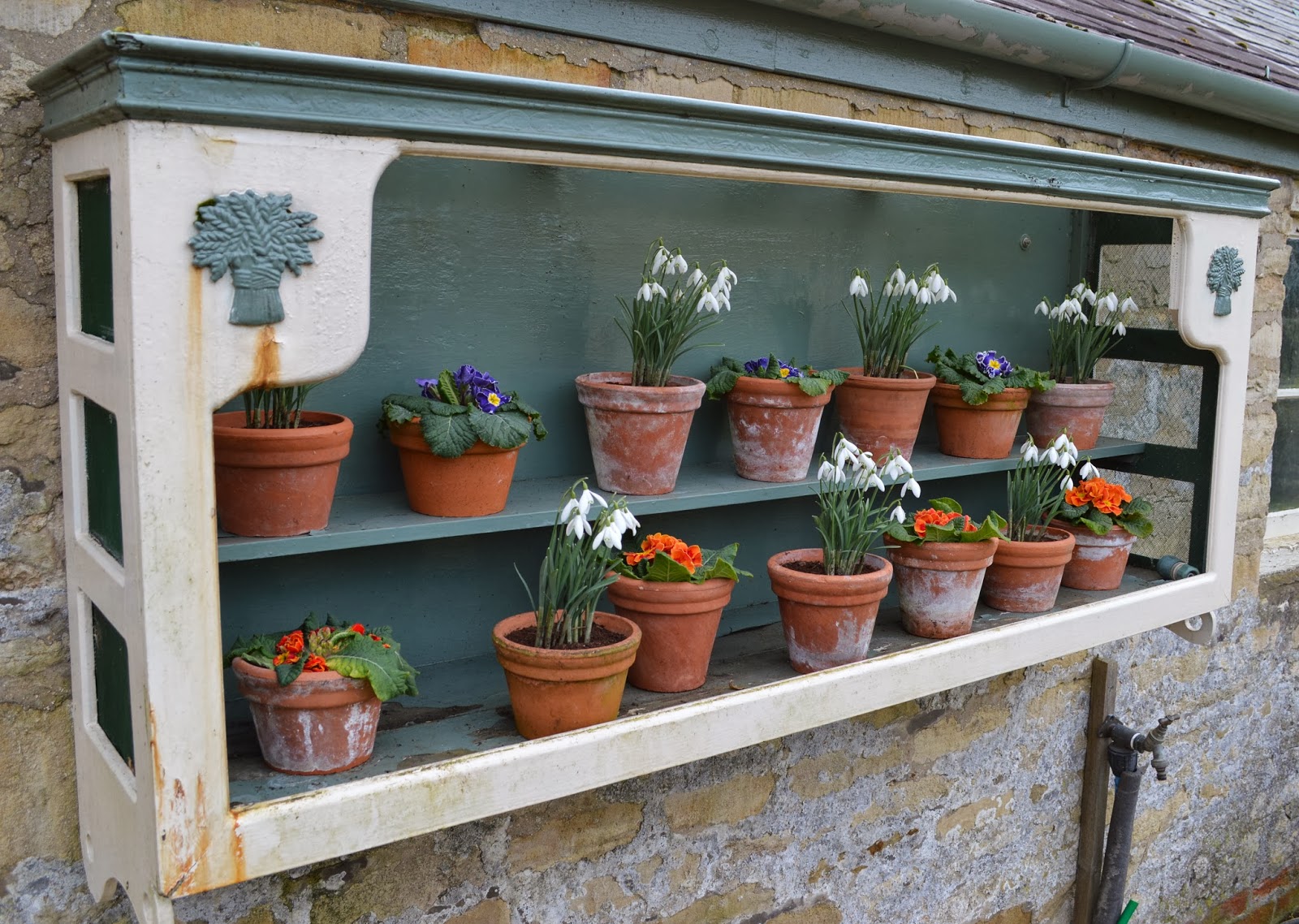 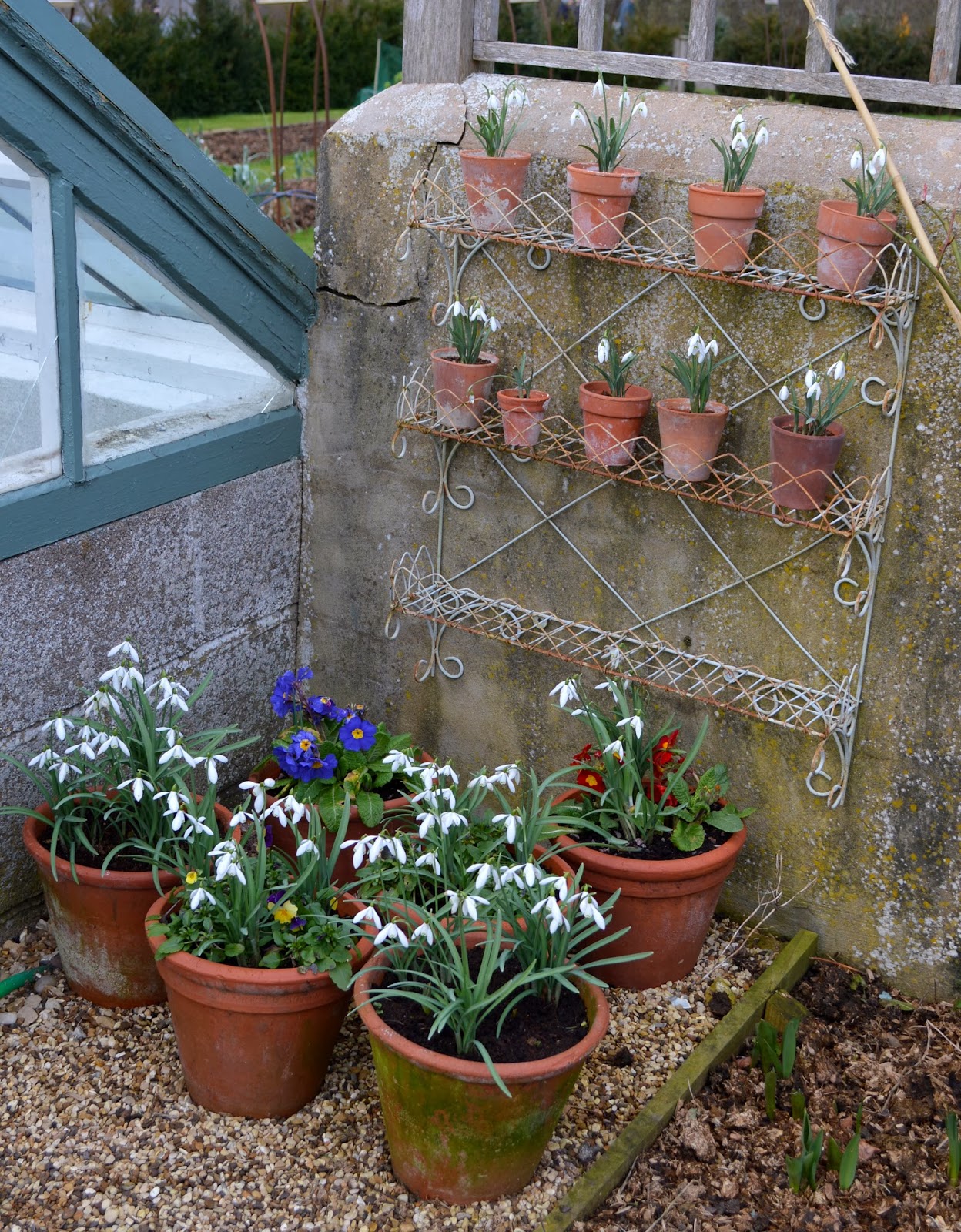 There are delightful displays of spring flowers, simple but effective.  You just can't go wrong with a terracotta pot really. 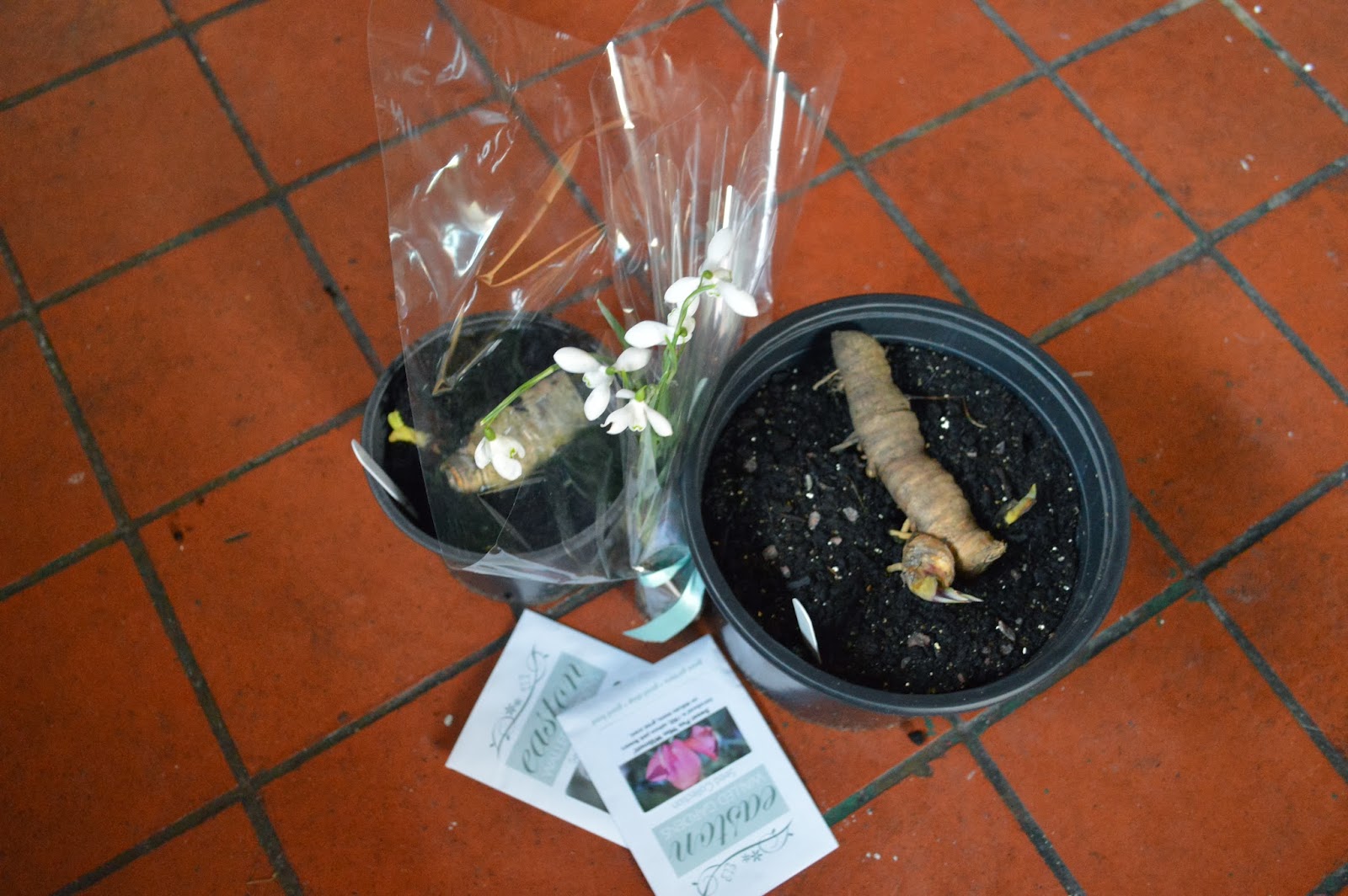 and yes, purchases were made.  I have already bought some sweet peas last year from Easton, but there is always room for some more.  These bearded irises were on offer, we spent an amusing 15 minutes choosing what to buy.  As we had no clue to the colour of the varieties at first we spent some time googling them on our phones, but then one of our party cheated by fetching the book from the shop and looking them up.  This however was very useful as it meant I did not buy the Iris called 'Yes'.  I very nearly did, it is a funny name and just so positive that I thought it must be worth having.  A look at a picture of it though made it a definite no for me, too wishy washy.  I am sure some people will love it, but in my world a more fitting name would be 'Eurgh'.  (too harsh? ...... maybe......)

So, saved from a disasterous purchase, I bought Iris 'Swazi Princess' (good name, good colour) and Iris Draco, yes, just because of Harry Potter, but it is also a very good colour.

and of course I bought snowdrops, it is against the law to go to Easton and not buy snowdrops. They have a special lock on the door that is worked by a button on the till and until it is pressed you cannot get out. 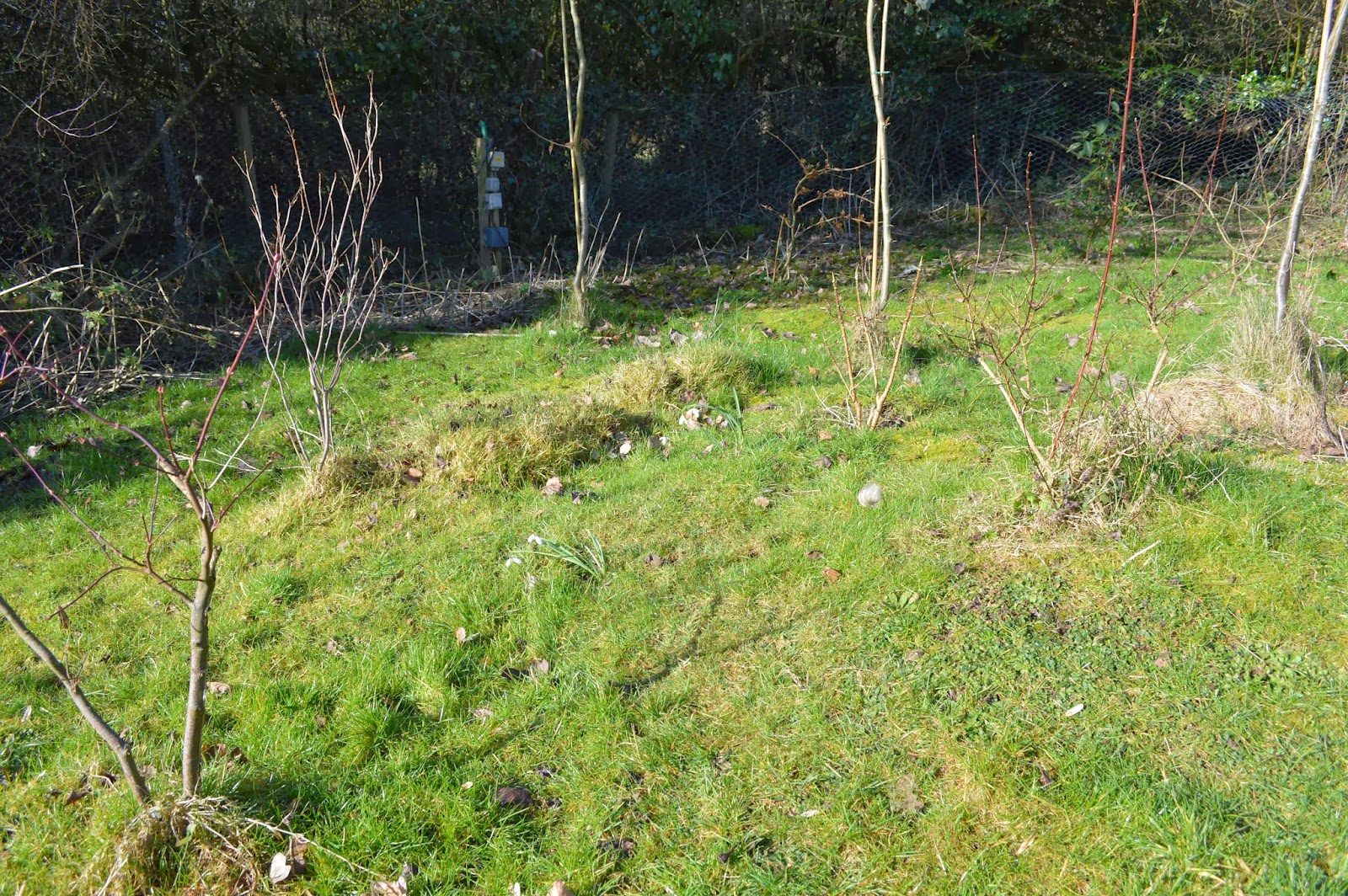 It got home and quickly planted out the snowdrops, they are to be the underplanting for the Four Sisters.  I like to plant my Easton snowdrops in places that I know I will remember they are the Easton snowdrops.  I can then see how they increase over the years and also it will remain a definite reminder of the visit. 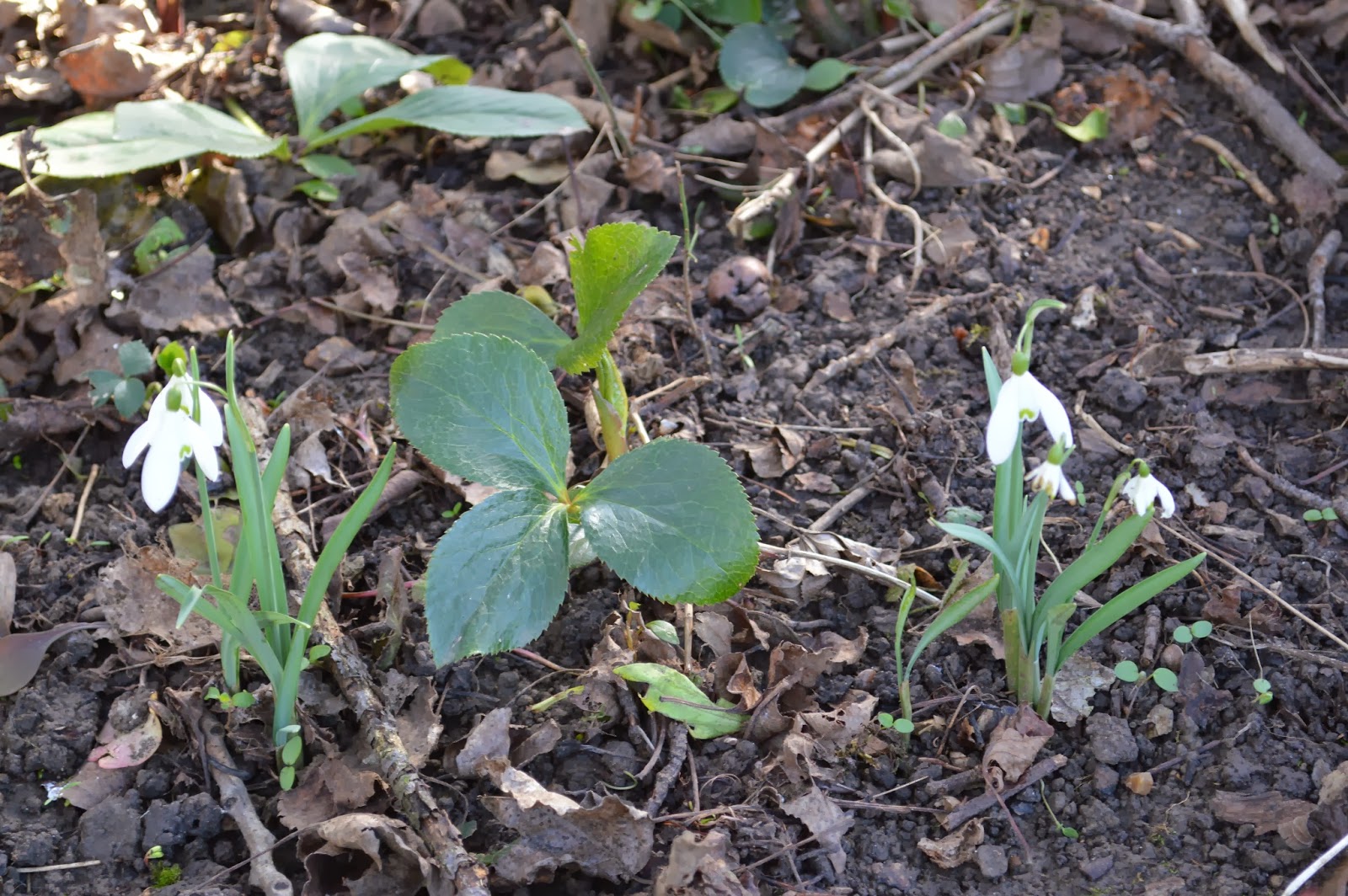 Last year's Easton snowdrops are in the Spring Border, flowering away now just like their distant family in Lincolnshire. 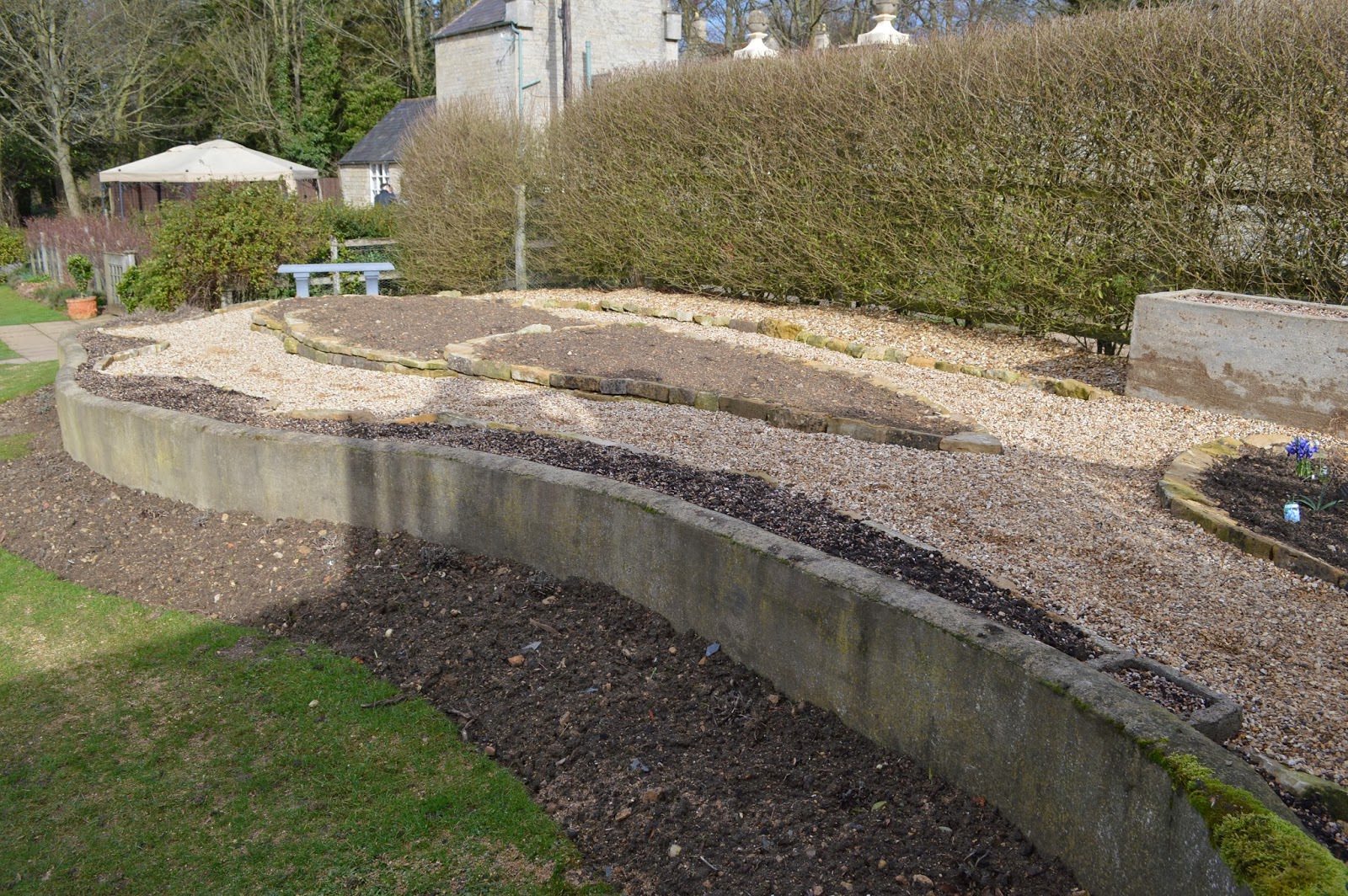 and I end in the knowledge that we will return to Easton for sweet peas if not before, and I look forward to seeing the new alpine bed when it has been planted up.  Visiting the same garden is about reminding yourself about what you know and you liked, looking at how things develop and mature and also the excitement of the new.