January 05, 2014
"January is named for Janus (Ianuarius), the god of the doorway; the name has its beginnings in Roman mythology, where the Latin word for door (ianua) comes from - January is the door to the year.”  (http://www.egreenway.com/months/monjan.htm)  Janus is also known for having two heads, looking to the past and the future at the same time.  This is a perfect position, knowing what has been and looking for what has yet to come.  I rather like this idea.

I do not really like January all that much though, it tends to be dark and grey and somewhat snowy.  Out of those three things the dark and the grey are the constants and the snow which is usually relatively quite brief an appearance which causes sufficient chaos to make it not a very welcome guest.  Also the weight of snow and the weight of water from the thaw coupled with the freezing temperatures can make it into a killer for many garden plants.  The perennials will keep alive under the soil and will weather out this brief but deadly period.  Some of the more fragile and sensitive plants will just give up.  I find the wet probably more of an issue than the freeze, many of my plants seem to get through the cold okay, but once it stays saturated for a long period of time they just rot away at the roots. 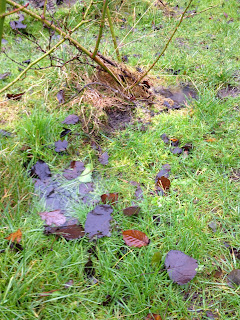 Last year was a hard winter, yet several of my dahlias made it through the winter with no protection and no digging up at all.  This was luck not judgement and a huge dose of laziness as I just could not be bothered to try and save them.  I decided they would have to fend for themselves, ‘live or die, do what you will’ was said with a careless abandon.

This year, as I have mentioned often already and will mention many more times yet to come, I am on Edgeworthia-watch.  Will the Edgeworthia make it through the winter?  I want it to so much, but I have lost several already and have never yet got one through a winter successfully.  But, I hear you cry, but – you have the three goes and you’re out rule!  Yes I do, but I also cheat, so at the moment this rule has an amendment (written in pencil) that says ‘three goes in this specific garden and you’re out’.  Well I have to account for the different growing conditions that one garden might have as opposed to another.  This current garden is 25 miles closer to the equator than my last garden so that must have some effect?  This is attempt number two for an Edgeworthia in this garden.  I have planted this one in the now ‘Four Sisters’ area of the garden, the Edgeworthia making up the fourth sister.  I chose this spot because it has particular qualities that I think will suit the shrub well.  It is not as exposed as some areas of the garden and is particularly shaded from wind and frost.  One of the other sisters is the Carol Klein Acer which suffered horribly where it was first planted in the garden.  I relocated it about three years ago and whilst it did not like being moved very much (it sulked for a good twelve months) I think it has now forgiven me and last year grew rather well.  I am now hoping for good things from it this year.  The soil is also not quite as thick clay as some parts of the garden, nor the incredibly free draining soil that is in other parts of the garden.  My dead Davidia was in a dry part of the garden, huge mistake!  I have dug it up and put it in a pot just in case some remnant of life remains in it – time will tell.  I digress, the Edgeworthia now has the rich moisture retentive soil that drains well  that the general advice for them stipulates.  This leads me to have hope I might have got it right this time.  Why did I not plant it there in the first place is of course a good question as I had checked what it needed before I planted the first on.  Well because I rushed to plant one before I understood the different characteristics of my garden as well as I do now.  Me – impatient to plant?  Who would have thought? (ahem).

Into January we therefore go, looking back (but not in anger) as memories of the previous growing season help warm us through the winter weeks; looking forward in anticipation as we plan the next growing season and stand by for the first snowdrop, the first winter aconite and the first hellebore to open.  It is like standing in a doorway, just about to take the first step.

This reminds me, I need a new gate, that’s on the list for this year as well.