January 02, 2014
It is my ambition to grow up to be Uma Thurman.  There are some minor issues with this wish:  I am (much) older than her, shorter, dumpier and far less beautiful – though I think her feet look a bit like mine if I squint and do not compare them to her feet.  Given a choice I can be even more specific, I want to be Uma Thurman in Kill Bill – preferably when not buried alive and shot full of rock salt, or in the hospital either for that matter, or actually much of the film as some really horrible things happen to her, but this is dreamland so what I am looking for is a yellow track suit and/or with a samurai sword and then I am happy. 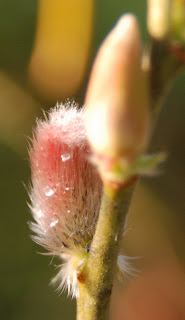 Let me declare though that I am not a violent person, indeed I would call myself a pacifist and I own no weapons of any kind.  Well, there you see, that’s not quite right is it, because like any gardener several quite dangerous things; from the benign garden rake (which leaps up out of the grass to attack me in a cartoon fashion alarmingly too often) to the terrifying, foot amputating brush cutter.  (I have both of my feet, largely because I used the brush cutter once and realised I would not have them for much longer if I used it again and promptly gave the lethal thing away.)

I am quite nifty with my topiary shears.  I find them quite fun and I have not cut myself with them yet – this is a result in my world.  Ordinary shears are ok too and indeed a weapon of choice.  I do have battery powered hedge clippers which I use about twice a year, mainly to cut my side of next door’s leylandii hedge which I have to say is beautifully maintained and kept to a very reasonable size and so no problem at all.  Well I say no problem, I hate clipping the damn thing and this is not helped by the wire that is looped into the hedge, I have no idea what this wire does but I suspect if I cut through it that my house might explode (or the lights might go out).

I did have two pruning saws, I now have only one.  One saw disappeared completely mid-pruning session.  One day it will turn up, one day.

There is my beautiful little Opinel garden knife which I use quite a lot and usually lives in the back pocket of my garden trousers.  I do sometimes worry that if I nip out to the shops in them that a) I am wandering around in muddy trousers and b) I appear to have a knife on me.  I worry about that one quite a bit, but then in truth, due to the muddiness of said trousers I rarely wander outside the garden boundary in them.  (I hasten to add the trousers do get washed regularly, but five minutes of being in the garden and they are filthy again).

I also have a new toy, the fantastic herbacious sickle.  It took me a while to realise that I needed a sickle, but need one I do.  I have have had a scythe for several years now and it is a wonderful thing.  I use to scythe the Wild Garden every September and it does an efficient job.  I like the scythe very much as it is totally in my control, it does not need electrickery to make it work or even batteries, I just pick it up and off I go.  I can also be quite precise with it, practice means I better every year  with it but there are times I just want to remove a handful or too.  I don't always want to go through the whole malarkey of getting the scythe out and sometimes I need to be getting quite close to what I am removing so that I can be sure only the unwanted is removed.  For this I need a sickle and now I have one.  I can't wait to give it a try. 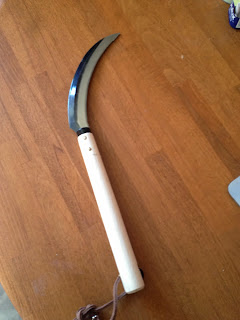 Finally there are my marvellous, mechanical Felco secateurs.  I bought these I think at the first Chelsea Flower Show I went to which was over ten years ago now.  They are my constant companions and usually either in hand or back pocket.  They are used for peaceful acts such as therapeutic deadheading:  one of my chores of joy.  They are also used for a bit more vicious pruning though not as quite as vicious as my pruning saw which is definitely a case of hacking and removing largely to create space, light and renew vigour.  (Well that is what I tell the plants as I attack them anyway).

There are times when I do think myself ‘where is my samurai sword when I need it?’, but usually within ten minutes of wandering around the garden, inspecting and doing maybe a little light deadheading/leaf tidying all is well again.