And then there were three

January 16, 2014
You know that moment when you realise you have invited three quite different members of the same family to stay which could make you feel nervous but you are confident that whilst they have never met before that they will get along together quite well?

Well, I planted a Viburnum opulus several years ago now.  It suffered from drought in its first year but it is now coming along quite well.  This one was bought specifically for its berries, sadly it is not yet large enough to flower or produce berries but I live in hope.

Then a couple of years ago after a visit to Hyde Hall in Devon I purchased a Virburnum plicatum kilimanjaro.  Again it is rather small at the moment and still settling in really.  It flowered a bit this year and I have hopes for great things from it.  This one was bought specifically for its shape and flowers.

For some reason, whilst I knew I owned both of these shrubs and I knew they were viburnums I did not connect that they were related, I did not make that connection in fact until I sat down down to write this post which was intended to start off by saying 'I thought it was time I bought my first Virburnum', when I realised I had two already. 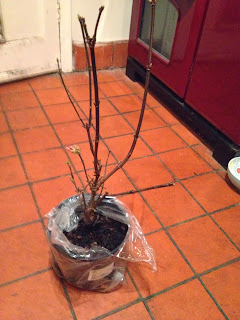 Anyway, I have just taken delivery of Virburnum number three, x bodnantense 'Dawn'.  This one was bought specifically for its winter scent and the rather nice habit of bearing its flowers on bare stems in the winter.

What does all this tell us, other than I am not good at making connections at times?  Well it tells me that viburnums are clearly a diverse and incredibly useful family of shrubs to have in the garden and that there is viburnum to suit every occasion.  This is good. 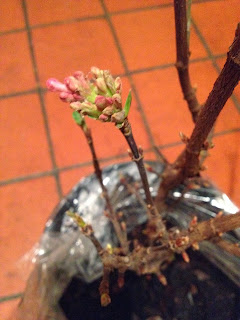 Now I just need them to settle down and do what I bought them specifically to do.

I also need to stop wandering around muttering 'these are not the virburnums you are looking for' when clearly they are.