The Blackberry Tales 9 - Doorway into doom

December 26, 2013
I like to have a garden project or two over the winter months.  It is a good time to do a variety of things that prepare the way for the next growing season.  This often involves increasing the borders and planning new areas.  This year I have spent some time wielding (and losing) a pruning saw reshaping the boundary hedge-trees and putting new fencing up to try and keep the local dogs out of the garden.  This also involved a lot of ivy removal, which in turn made me think about ivy.  I received some good helpful comments on the post I wrote about ivy and this made me turn and look again at the ivy-covered tree that sits in front of the kitchen window.  I picked up the pruning saw (the other one, the lost one remains lost, that is whole other tale) and decided to make a start. 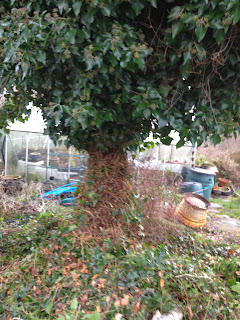 Now this is a big project and I am not going to detail here as I am still mid-way through, the purpose of this tale is is concerning what I found mid-ivy-removal.  This tree was very covered in ivy, it was basically an ivy mound.  It had always been covered in ivy from when I first moved into the house and whilst I had half-heartedly tried to remove it previously I had never made much headway.  This time I was on a mission, I cut and hacked, hacked and cut and the shape of the tree started to re-appear.  The shape included a bulge.  I thought the bulge a little odd and continued hacking.

Then it appeared, the edge of something crafted from wood.  I thought (hoped) it might be a bird-box so I continued with even more focus.  After a short while it was uncovered and it was indeed an old, wood-worm ridden, rotten bird box.  In the seven years I have lived here I had never seen it before, it had always been completed covered in ivy.  I had no inkling it was there.  I cleared it further and a massive chunky black spider ran out of it. I managed not to fall off the step-ladder (just) and decided to leave it alone for now. 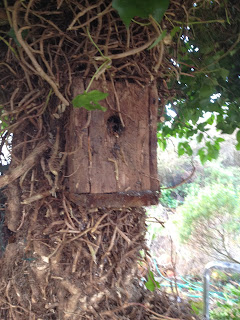 I posted a picture of it on twitter (as you do) and someone commented that it looked like the entrance into Mordor.  I thought about the big black spider and could only agree.

I look at the tree as I stand by the kitchen sink, I kept looking at the bird box and it ominously kept looking back.  It disturbed me.  After a whole day of this I decided it had to be dealt with, so standing at a distance I knocked the bird-box off the tree, it was so rotten it fell very easily and I stuck it on the compost heap.

A day or so later my daughter came to visit, I was proudly showing her the ivy-removed tree and she commented 'oh the one with the haunted bird-box'.  I then knew I had done the right thing in removing it........

..... or have I?  I have read enough M R James ghost stories to know that removing things and unleashing things is rarely a good move.  Now where is that spider..........