December 08, 2013
I wrote about The Eye of Orion some time ago, which apart from the quotation in which it appears, was the only mention of Orion in that post.  This is odd really as Orion is a constellation I am rather fond of.  This is partly down to the fact that it was the first constellation I learned the name of many years ago when still living with my parents.  When I stood at the front gate, this time of year, I could see it keeping watch over the house.  At this I was reading 'Red Shift' by Alan Garner, I still am a great fan of his books and they were brilliant reading at the time.  In the book two of the main characters talk of keeping contact by looking at Orion's belt at 10pm every evening, it was from reading this that I found out which constellation it was and that  I could recognise it.  Before then I admit I struggled to see the patterns in the stars, they just seemed dotted about.


Move on a bit - Orion references are strewn throughout the things I like like Bad Wolf is cast across the universe.

Rigel - in Farscape, everyone should watch Farscape
Bellatrix - LeStrange in Harry Potter
Betelgeuse - I refuse to explain this one, you should just know
Orion's Belt - Men in Black I

and of course, the ending words of Roy in Bladerunner (1982) "I've seen things you people wouldn't believe. Attack ships on fire off the shoulder of Orion. I've watched C-beams glitter in the dark near the Tannhauser Gate. All those moments will be lost in time, like tears in rain. Time to die."

Where I live now I see Orion as I stand by the front gate like a comforting constant, if I can see Orion then things must be ok, no matter how cold the Winter gets.


According to Wikipedia, "the Ojibwa (Chippewa) Native Americans call this constellation Kabibona'kan, the Winter Maker, as its presence in the night sky heralds winter"; and this is very apt, I associate Orion with cold crisp nights with frost in the air.  So whilst other cultures call him the hunter, to me it will also be the Winter Maker from now on. 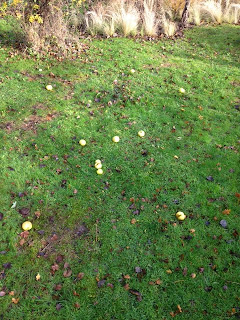 I needed a photograph to show Orion, I failed to take one of any use of the actual constellation, so I amused my neighbours by creating one out of apples (not to scale!).  I amused myself too but it also gave me the germ of an idea.  This may come to nothing, we'll see.