It also took me far to long to work out that a perfectly healthy plant that I had just planted in the wrong place, could also be moved to somewhere else.  It was like I was doomed to live with my poor planting decisions as a lasting reminder to think before you plant.  I think the first mass move around I had in this garden was a few years ago when I created the Pond Border.  I moved many of the plants from the Bog Garden into the Pond Border, including two bamboos and several day lilies.  At the time I was considering removing the Bog Garden altogether and making it into a second pond.  This fancy passed and the Bog Garden has been re-started, but the plants I relocated settled in nicely to their new homes and looked a lot better than their original planting. 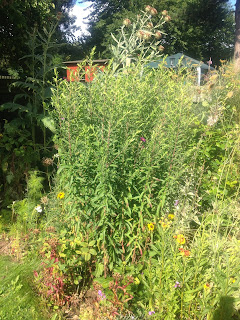 I bought some asters about three years ago, they are rather wonderful and I think came from a magazine offer.  One of them, the very large purple one, was planted in the Conservatory Border.  When I say very large, I mean grows to about 4/5 feet in height.  It is a brilliant plant and I am very fond of it, but it was in totally the wrong place. I realised it was in the wrong place probably last year as it started to reach maturity and therefore its full height, but I did nothing about it apart from get irritated by it every now and again.  This year the irritation got too much.  I kept walking up to it and looking at it and thinking 'you are in the wrong place, you have to move'.  The only problem was I could not decide where to.


One day after quite a long day of gardening I settled down to have a cup of tea at the end of the afternoon, sitting outside and just pondering what a good day it had been.  Suddenly I knew where the aster should be, suddenly it was all very clear.  But I had finished my gardening for the day, I was on the wind down.  No, it was no good, the aster had to move and had to move then and there.  So the spade was fetched and the beast was tackled.  It came up relatively easily which was a bit of a surprise. 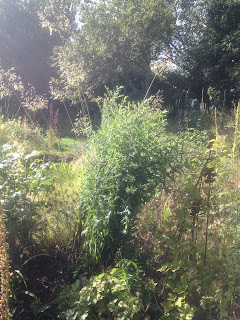 I relocated it in the Pond Border, a far better place as it can be seen from several sides.  I watered it in well and thought job done.  What followed were several rather dry weeks, I watered the poor beast daily as I knew I had moved it at a bad time of year.  I also, stupidly, left it at full height, I should have cut it down to reduce the stress on the plant, heaven knows why I did not do this as I knew at the time it would be the sensible thing to do. 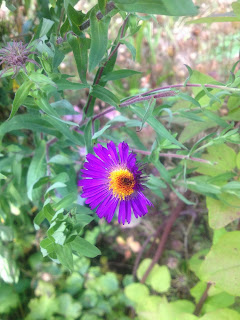 Several weeks of watering and now the October rains and the aster seems fine.  It has flowered in forgiveness of the harsh treatment it received; not quite as much as flower usual but it did its best.  I know that next year when it comes up again it will be fine now and will look so much better where it is. 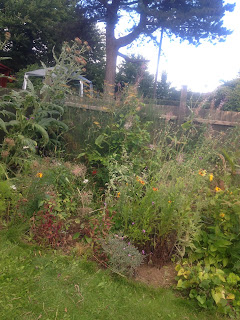 Of course it did leave rather a gap.  I divided an astrantia and an anemone to put into part of the gap as permanent planting and also a wallflower for the spring.  I do not mind a bit of a gap over the winter as it gives me an opportunity for new planting in the spring.  I shall probably divide some more plants to fill it.  What I do really like is that there is now not a huge aster plonked in the middle of this border looking flipping awful.  A job well done.