The Brigadoon of gardening

It’s happening again, it happens every year at about this time so it is not a surprise, it is certainly not a shock; but it is a disappointment nonetheless.  We are now entering the period of the year when the garden disappears like Brigadoon during the week only to be seen at weekends.

I might as well not have a garden during the week once the nights really draw in, I cannot wander around it in daylight so it effectively is not there.  Currently as I get home I do get a wonderful blast of scent from the Rosa Gertrude Jekyll that climbs by the front door but otherwise it is becoming just a dark mass of shapes I cannot quite see in the dark.

Now I have put the thought that it is Brigadoon into my head, one of my all time favourite films and I am certain I have mentioned it before, I have wonderful visions of people in unrealistic technicolor tartan dancing around the pond with unrealistic Scottish accents.  I do love a good unrealistic accent, they are so much more fun than convincing ones.

I think I’ve had Brigadoon on the mind since watching Gardeners World the other day when there was a section on heather.  Now I love heather growing in the wild, there are few finer sights than a heather-covered moor or scrubby outcrop.  Whenever we are visiting Portmeirion we spend quite a bit of time in the Gwyllt and there are great swathes of heather on the cliff-tops and they are usually buzzing with bees and wildlife. 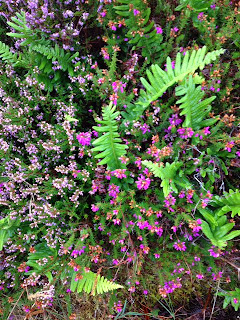 In a domestic garden though I think it is more difficult to use well. When I first moved into my last house in Nottingham, the garden was largely lawn with a few shrubs and stuff dotted around and also a sort of rockery bit covered in various heathers.  These heathers were overgrown and tatty and I did not know what to do with them so I gave them a hair cut in the hope they would bounce back ok.

They did bounce back and then just sort of sat there looking rather unbouncy and uninspiring to be honest.  At this point in my gardening life though I was still very much a novice and still held back by the thought that if a plant was in a garden and healthy that it was somehow wrong and indeed possibly murder to remove it wantonly.  I was talking to someone one day in the garden (it was the front garden there was no real back garden to speak of) and they pointed to the heathers and said disparagingly ‘lazy planting’.  I asked them what they meant and they explained that heathers planted like that was just ground cover for people who couldn’t garden any more or who were just lazy.  This thought stayed with me though, clearly heathers were not a must have plant and possibly it could be justified to remove them.

So I ripped them out

Gardeners World did make me think about heathers again (yes, you see it does have its uses) and I am wondering if I could put some in the garden, maybe in the Wild Garden rather than trying to make them look domestic in a border setting.  I am going to think on this some more as at the moment it is has the vague feeling of the edge of a whim.  I do know if I do get some it will not be any of those fluorescent coloured things I see sometimes at DIY stores, that I do know.

and Heathers is a great film.