October 13, 2013
A couple of months ago I found a brain-like fungus growing in the vegetable border.  On closer inspection it turned out to be a couple of white cobs.

Roll forward a few more weeks and I find a couple more cobs in the Wild Garden, half eaten, just sitting there. 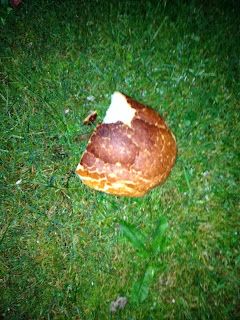 Then this week I found half a loaf on the front lawn.  This has to mean one of the following:

1.  the neighbours think I am a charity case and are leaving bread-based gifts around the garden hoping I will think they have grown there.

2.  its the bread monster who as he flies over keeps dropping bits of his stolen booty

3.  the cats have taken up baking in secret and are hiding their mistakes in the garden

4. there really is a bread-fairy

5. its foxes - but then that would imply there was a bakery near me for them to steal the bread from and I don't think there is.

There is option number 6, but this option scares me more than any other.  Option number six is that the spirit of Joey Boswell is creaking around my garden in his leather trousers, saying 'greetings' to the cats (which also explains why Austin will not go out) leaving a trail of bread as he walks. (shudders).