A surfeit of coccinellidae

October 24, 2013
You say Coccinellidae I say ladybird, that beloved beetle of nursery rhymes and cutesy pictures.  You have to love a ladybird, we all know they eat greenfly and are to be definitely encouraged in the garden.  They have their weird monster-looking larvae, which dot around in the garden in Spring and then the grownups arrive and start munching.  It is difficult not to smile when looking at a ladybird (especially if it has its mouth full of greenfly….) 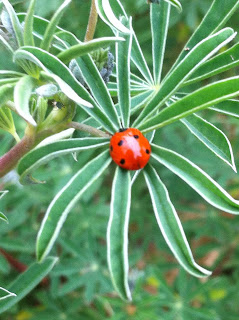 I was having a conversation at work the other day about ladybirds, as you do, and it reminded me of a summer holiday in Norfolk let’s be precise, Hunstanton; when I was growing up we had a caravan at Hunstanton and spent many – many – many holidays there.  Most of these holidays blur seamlessly together but on one of them there was a plague of ladybirds.  When I say plague I mean the air was thick with them at times, you crunched along paths and pavements as they coated everything.  In our caravan they made stripes in the folds of the curtains and even prevented the water-heater from working as the pilot light was blocked by tiny ladybirds in the pipe.  Worst of all, they bit.  Yes they did, they definitely bit.  People will tell you that they cannot/do not bite, but they did something that felt like a bite and it hurt.

I am fond of ladybirds, but I also still look at them a little warily, I wonder if one day there will be a horror film based on a plague of ladybirds – terror from cute things is always the most frightening I think (don’t start me off on stories that involve toys coming to life).  I often wonder if I will come home one day and they will be spelling out messages to me on the side wall of the house.

Sometimes I think I over-think things.