August 04, 2013
Many years ago, when I was a teenager, we used to go on family holidays to Cumbria, in particular to a village called Little Musgrave, a village so small that to this day I use it as a sign as to whether a road atlas is worth buying or not.  The nearest big town was Kirkby Stephen which was (for us) most notable for the butchers that sold incredible sausages and the bakers that sold 'treacle' bread.  I spent weeks perfecting my own version of the treacle bread recipe and I still make it routinely as the loaf of choice in my bread machine. 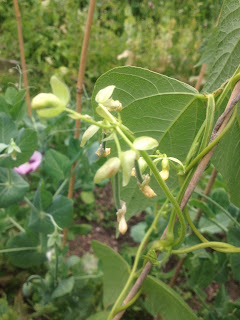 Another memory of buying from shops and markets around that area was the sale of bobby beans.  We had never heard of bobby beans where we live in the Midlands I have never seen them on sale, but there they were, labelled up and being sold in brown paper bags.  On closer inspection it became clear that bobby beans are a thin bean similar to a french bean, but they tasted better than anything we could buy back in our home town. 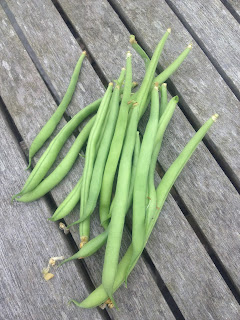 So now I grow Cobra beans and whenever I pick some I think to myself that they are bobby beans.  I don't like to let them get too thick or stringy, the thin, tasty bobbiness of them always makes me smile.  From a hunt on the internet it would appear that bobby beans are listed as 'bean cora', now I shall have to get some to grow next year and I can have proper bobby beans again.