A bit of containment

August 25, 2013
As mentioned in a recent post I have several plants that have moved house with me on more than one occasion.  It is fair to say that whilst I have gardened pretty much for as long as I can remember, it was when I moved into my last house in Nottingham that I had time and space to start to get obsessive.

The story of this house can be found here, it remains somewhere I have huge affection for and I think back on my time living there with a smile. 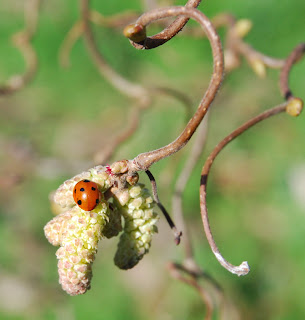 It was however a tiny house with a not very big garden either.  There were things I wanted to plant but I just had not the space to do so.  I also knew that this was not my 'forever' house (not sure there is such a thing for me, but anyway), so I quickly started to accumulate plants that lived in pots as they were not in their final resting place just yet.

I think the first things to go into pots was a collection of shrubs from a magazine offer.  I think it is compulsory that all new gardeners buy from magazine offers and I have got some very nice plants in this way.  (I have also got some completely mis-labelled roses in this way).  Anyhoo, the first plants were some bamboo that I have no longer have and I cannot remember what it was, a Corylus avellana 'Contorta' and a Ceratostigma willmottianum 'Desert Skies'.  They must have lived in their pots by the front door for a good three or four years.

There was also the Cercis candensis 'Forest Pansy', bought as a real bargain from Gardeners World at the NEC probably six or seven years ago.  This plant did not live with me in Nottingham, I bought this when I lived at my first house in Leicester, but that was only ever a temporary home so I planted very few things whilst living there.  As I knew I would not be living in that house for very long and so I put it into a container.  I had also not long read an article by Dan Pearson where he talked of having the same tree in a container.  It looked fantastic and I loved the look of the tree.  I have said before I am suggestable to such things so one was duly bought.  This too now lives in the Wild Garden quite happily and I am now just waiting for the year that it is large enough to flower. 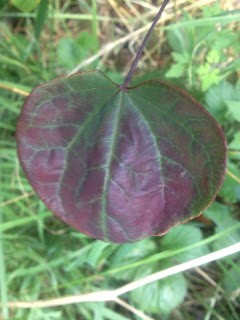 The other pot-dweller was my Ginkgo Biloba tree.  Now I love this tree, it is a fantastic tree and whenever I say I am not a fan of conifers this tree is top of my list of exceptions.  It lived in its pot opposite the back door for many years at my Nottingham house.  I could see it when washing up or just gazing vaguely out at the back yard.  I loved, loved, loved this tree. 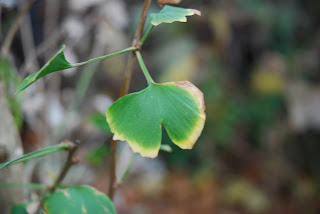 This all sounds a little past -tense, which is not true as the tree is still alive though it did have a serious set back.

When I first moved into my current house one of my first jobs was to plant out the pot-dwellers and particularly the Ginkgo.  I knew I would be living here quite a while and it felt like it now had a home.  I went to the very top left-hand corner of the garden and this was the perfect spot.  I carefully planted it, observing the amount of human-slurry that was clearly still not totally composted down from when the house had belonged to the sewage works that had long-since gone.   I planted my tree and I was happy that my tree was happy and it flourished.

About two years later I was driving home from Gardeners World exhibition at the NEC.  I had had a nice day, many plants had been purchased, I was tired but all was well.  It was a very hot day and as I started to drive down the lane to my house I noticed a pall of smoke and thought to myself that my neighbours must be having a bonfire.  I had never known them to do this before and it was a rather hot sunny day for a bonfire, but there was smoke so what else could it be.  As I drove a little further I realised that the smoke did not appear to be in their garden........... actually it looked like it might be in my garden..........I drove closer, closer, it was in my garden!

I parked quickly, I ran into the back garden and up to the top left hand corner where it was now clear that there was a fire was mainly in the dog-walking field (apparently its a wildflower meadow, but....)  that borders my garden.  I had no idea what to do, my hedges were catching alight, and the Ginkgo was surrounded by flames.  I rang the Fire Brigade, as I finished the call I looked up and a fireman was climbing into my garden.  This felt like magic!  He explained that there has been a series of fires lit all around the area in the afternoon and  asked was there somewhere close that the fire engine could park.  Within minutes the fire engine was in my driveway and it felt like hoards of fireman (possibly three) were putting out the fire.  This was a massive relief but the damage was bad and the top corner looked awful. 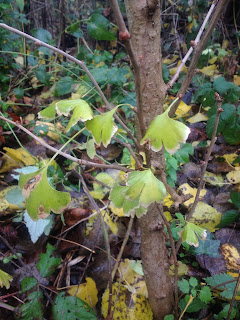 The ginkgo did survive, the ornamental cherry next to it didn't, but the Ginkgo sprouted from lower down and every year it gets a little stronger.  This is good. 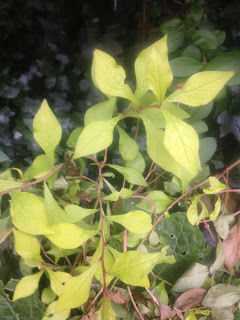 The Corylus avellana 'Contorta' and the Cercis are happy in the Wild Garden, the Ceratostigma is happy in the front garden.  Their patience for living in pots has been rewarded by being properly planted out now.  I am also quite pleased that I managed to keep them happy for so many years in containers.

I do grow seasonal plants in pots that change from year to year, but I also still have some plants in pots that are there on a long-term basis; not because I am intending to move, but because I cannot plant them where I want them to be.  I have a rhododendron, a camellia, an olive tree and an azalea in large pots in my courtyard (I laugh to myself every time I call it a courtyard, it is really a bit of concrete between the utility room and the conservatory, but if I am going to be pretentious I might as well go over the top with it).  It is a shady area and considerably brightened by these containers.  In the Spring the scent of the rhododendron fills the conservatory when I open the door.  It has made a real improvement to this awkward space and I am now constantly on the look out for other things that I can put there in a pot to make a little oasis. 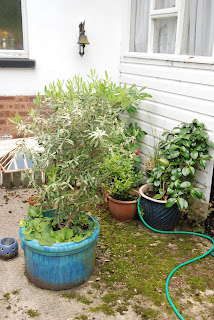