The Trial 10 - a rose called Titchmarsh

July 25, 2013
Yes, its Rosa Alan Titchmarsh, sent to me to trial by Thompson and Morgan, yet I soon discovered that it is a bit more complicated a trial than others have been.

So let us start from basics, I like roses and grow quite a few.  To be sent a rose randomly is quite a challenge as I am very choosey about whom I allow into my garden rose-wise.  There are criteria they have to meet in terms of colour, size, shape and scent.  Well, the same as any other plant I allow in really except I think I am fussier about roses. 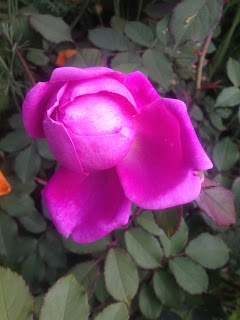 There is another aspect to this trial, which is almost the elephant in the room.  I grow various roses named after people of things that mean something to me.  I also grow some just because they are beautiful, but I have never really had to consider before about buying a rose with a name of someone I might not like.  Well it is a consideration isn't it?  I don't hugely dislike Mr T, but I also am not in the 'adoring wildly' category.  I thought about this further, would I buy a rose called Monty Don?  I don't actually know, I did buy sweet peas named after him and they were incredibly beautiful sweet peas.  I am absolutely certain that I would not buy a plant named after someone who politically I was opposed to, I just couldn't.  So would I have ever bought a rose called Mr T?  Well I might buy a rose called Mr T but that would be more to do with the A Team then dear Alan!  On balance, after all that thinking, I think I might have bought this rose. 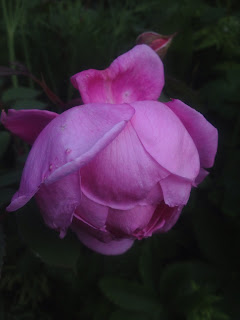 and I haven't even told you anything about the rose yet.  Well it is a rather good rose.  A nice pale pink, not too wishy washy, just a pleasant colour.  The scent is quite good, there is better but there is certainly worse.  The flower is a bit ball-ish, but that might be because of the really hot weather there has been lately.  It is not a bad shape anyway.  I received three bushes as bare root plants and they have all grown strongly and are flowering well.  This is a nice plant, I can recommend it if you want a rose named after Mr Titchmarsh.

Personally I think I would prefer a rose named after Alan Partridge, as then I could say aha! everytime I looked it at. 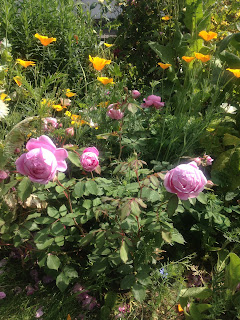 I have just renamed the rose.