Some time ago I saw that the Garden Museum were advertising a literary festival to be held at Tom Stuart-Smith's garden with a variety of well known and interesting speakers.  I really wanted to go but the cost was coming at a difficult time and I could not in conscience really justify the expense.  So I shelved it away in my mind, as you do, and moved on. 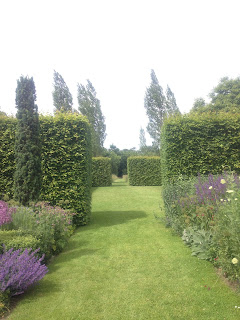 Then, in that magical way that Twitter has, I saw a message from someone who had a ticket to give away, not sell, but actually just give away.  I replied without much hope, saying I really would like to go.  The day went on and I assumed someone else had been successful so I shrugged my shoulders, as you do, and moved on. 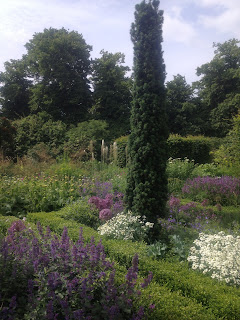 Then in the evening I got the message saying I could have the ticket, Charlie Bucket could not have been more excited! How wonderful was that?  How kind was that?  I was delighted and it cheered up the rest of my week considerably.  I also arranged to meet another twitterer whilst there so the day was looking better and better. 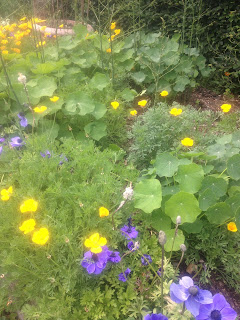 Now it was delight to be able to wander around Tom Stuart-Smith's garden.  It was a magical background for the event.  The talks (that I attended anyway) were excellent, it was not possible to attend all the talks as some overlapped, this led to some tough choices.  There was a bit of a slightly muddled, not disorganised but also not completely slick feel to the day which was rather charming.  Oh and the weather, the luck of the weather as had it have rained it would have struggled I think to have made people so happy. 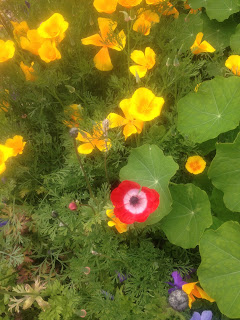 The speakers I saw were:  Tom Longstaffe-Gowan, George Plumtre, Cleve West and Piet Oudolph.  All quite different and all interesting and entertaining.  I am not going to go into details of the talks but the theme of the day was garden literature and specifically gardens in biography and autobiography.  A lot of the books spoken about were about the place of the garden for the author.  The running theme was about the garden as personal and about the journeys, gardens and people make through life and how they intertwine.  I found it very interesting and an event to make me step back and think a little. 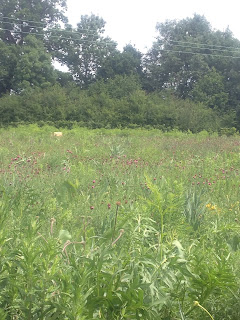 A recurring theme also was genius loci, I assure you that this will be a theme I return to as well.  It was referred to at once point as being a cliche but also very relevant.  I think often things are cliches because they basically sum things up well.  So cliche or not, at some point genius loci will turn up again on this blog. 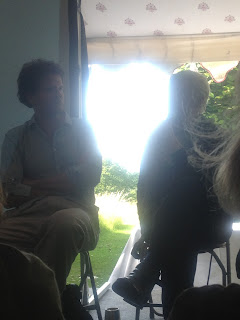 I rather like this photograph of Tom SS and Piet Oudolph.  It reflects the ethereal nature of the day, the mood was so bright that it was not possible to capture it on film (or it was taken pointing into the sun, one or the other).

I hope that the Garden Museum run a similar event again, I would like to encourage this strongly.  It was not only a civilised way of spending a day, it was informative and a great space for reflection.  If it happens next year I will definitely go and I will  try and go for both days.  (This time I sadly I missed out on hearing Dan Pearson and Sarah Raven (plus others) speak and I am sorry about that, there will be another time hopefully.)  To wander around such beautiful surroundings was a total bonus and I bought a plant too, a rather nice delphinium so there is a growing memento of the event in my garden.  Here's to the next one.....