As a result of all this the garden is growing at quite a rate!  Lets start in the front garden. 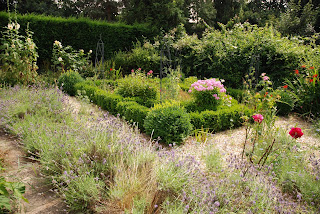 The front garden is doing rather well.  The lavender edges are covered in bees and butterflies, I cannot begin to tell you how happy this makes me.  Also as the heat has got in the higher numbers recently the smell of lavender as I walk through the garden has been intoxicating. 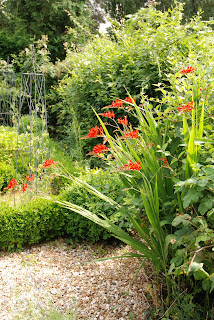 This patch of crocosmia is adding a nice bit of colour in the corner, I am glad I did not remove it when I did most of the other crocosmia from the front garden last year. 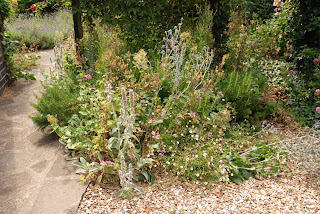 The gravel garden is quite bushy and green.  It has enjoyed the rain and heat this year. 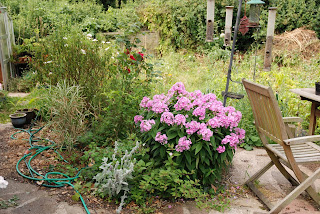 This ignored border by the bird feeder, (this must be the Bird Feeder Border, it is now duly named), is doing fairly well.  The phlox are looking nice and the red splodge of roses are good.  It is usually mainly full of germinated bird seed though. 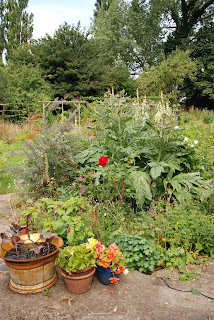 The way into the back garden is looking quite nice, here are the cardoons and the amaranthus, both of which are doing very well. 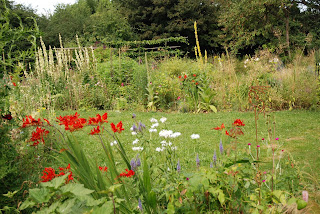 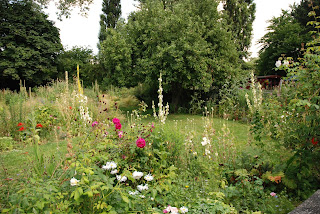 Looking across the Conservatory Border, the borders are doing well.  I think I have allowed too many verbascums to grow this year, I shall have to edit more firmly next year. 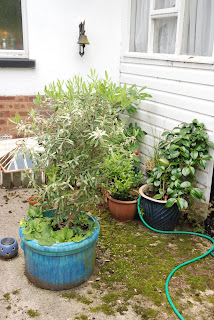 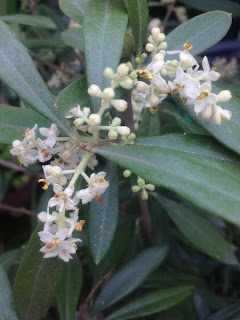 In the Courtyard the olive tree is covered in flowers, I expect to be pressing my own olive oil in the Autumn.  (I don't really). 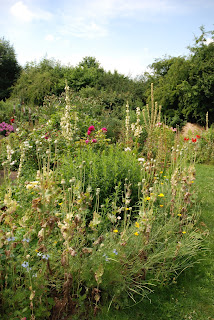 The Coal Bunker Border is sort of transitional at the moment, most of the Californian Poppies are over now and the asters are just waiting to get really started. 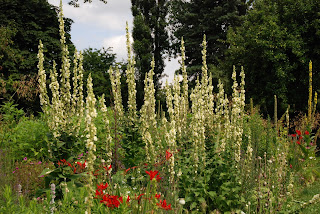 Did I mention I overdid the verbascums? 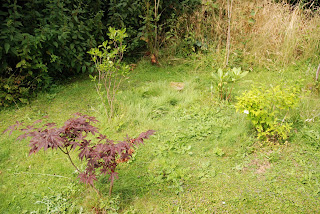 The Four Sisters are doing well, the Philidelphus 'Belle Etoile' flowered well and the others are thankfully not suffering from the lack of rain earlier in the month. 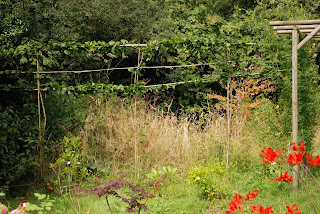 I've been working on the pleached hornbeams a bit too.  I feel like they are getting there, bear in mind I have no clue really what I am doing, but it is pleasing to me. 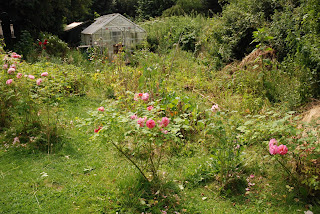 A quick look behind me shows the veg beds and the Rosa Hyde Hall hedge, which is flowering away like a good'un. 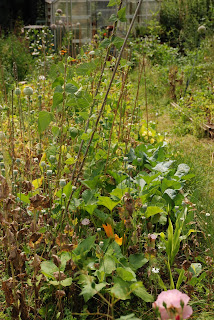 The peas and cobra beans have done really well this year, though the peas are a bit maggoty now which is a shame.  The courgettes are about to deliver their first fruit and the purple sprouting broccoli, spring cabbage and savoy cabbage have been planted out and are about to be consumed by cabbage white caterpillars.  I have harvested the garlic and that has done well and the onions will probably be pulled up soon.  I have also had a few potatoes too.  I only have two sweet corn and I expect little if anything from them.  I also have some yacon growing as they were sent to me by Thompson and Morgan to trial.  I haven't a clue what to do with them but I will find out. 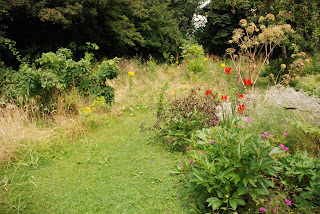 Anyway, through the pleached hornbeams we get into the the Wild Garden ahead and to the left and the Tree Lupin Border to the right. 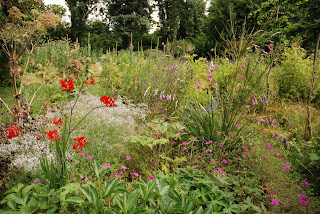 The Tree Lupin border is growing quite well, and look - no look! The Dierama is finally flowering after waiting five years for this frabjous day!  I'm glad I didn't dig it up now. 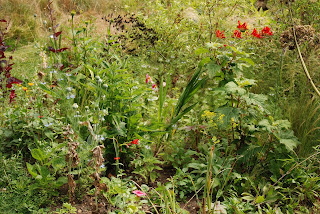 The Tree Lupin Border is not the riot of colour that I wish just yet, but as ever I live in hope.  The Zinnia Spiders are in flower and the first dahlias are starting to open.  Next month, next month..... 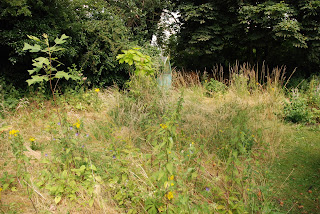 The Wild Garden is ok this year, not great, but ok.  The grass has been too long really and then it flopped quite suddenly.  There are some nice wild flowers dotted around but this year has not been a great year for it. 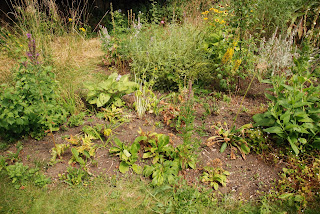 The Bog Garden has suffered quite badly in the heat, I have had to keep it watered as most of the planting is new.  Some has got quite crisped but the recent heavy rainfall over the last few days has really perked it back up. 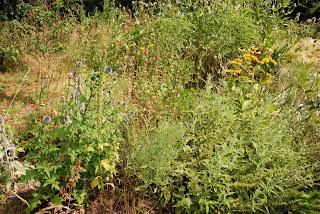 The Woodland Border behind it is doing very well, that is far more established. 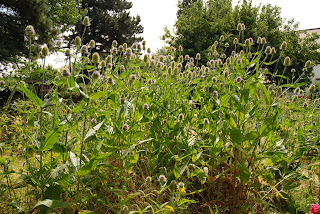 The teasel patch which borders the Woodland Border is magnificent this year.  Very happy with it, it is so tall!  Not so happy when I brush past it and get scratched to ribbons, but it is a small price to pay. 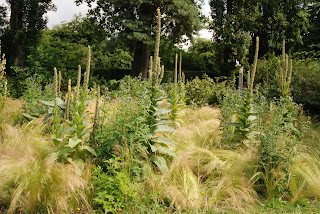 The other side of the teasel patch are the Prairie Borders.  These have been good so far this year.  The blondeness of the Stipa Tenuissima has made me happy, though the torrential rain has made it flop a bit so I have given it a bit of a hair cut to tidy it a little. 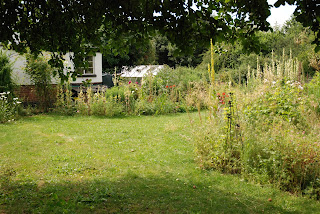 Back down then from the Prairie Borders with the Pond Border on the right and the Coal Bunker Border straight ahead. 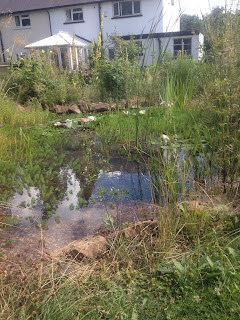 I end as ever on the pond which after all the rain is really quite full, and also quite clear which makes me very happy.  Several dragon fly larvae have emerged and there are still a few tadpoles squiggling around in there.  Every day when I get home from work I wander around the garden and go and stare in the pond for a bit.  Maybe I expect to find the secret of the universe somewhere hidden in its depths.....

Thanks as ever to Helen for hosting this meme.  Apparently we are almost at August already!