June 17, 2013
I have not been to Gardeners World Live for about three years I think.  This has been mainly due to work commitments, (I cannot keep taking time off to go to shows and whilst I could go at the weekend that eats into gardening time so I don't see that as an option), and partly to do with not a bottomless pit of funds so I have to choose which shows I want to visit and also I had actually got a bit fed up with it. 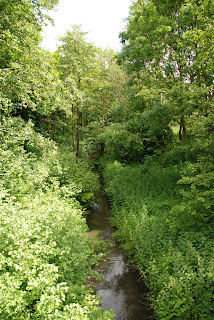 Sorry to say I thought it had lost its way.  One thing I love/d about Gardeners World Live was its unashamed focus on buying.  It was in my mind the opposite of Chelsea Flower Show, no high-brow show garden considering to be done here, here was where I came to spend.  So when they started to introduce show gardens, well actually when they first did this I didn't even notice!  Then when I did notice I thought it somewhat pointless and a waste of my shopping time - and - I have to say this, the gardens appeared a bit tokenistic (sorry).  Add in to this when they started to put it on alongside the Good Food Show well then I just gave up.  The whole point of the show for me was muddied, there were other more focused plant fairs that had appeared and they were far more to my liking. 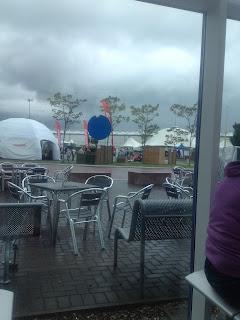 This year I was not going to go, I ignored all their imploring emails offering various amounts of discounts off the ticket prices.  I was steadfast in my resolve, no GWLive for me!  Until I saw a competition on twitter from the Real Men Sow blog.  I rarely win competitions but I decided to have a go, why not I thought.  Well I won two tickets and thankfully I had already booked the Friday off from work to do some gardening so I could easily attend.  It was short notice though so I could not call on a companion to join me so I went along and gave my other ticket away to someone standing in the ticket queue, waste not want not.

I wandered around and I had a great time, I had a very small shopping list of plants, I wanted some blue meconopsis.  It took me a while to find some that a) looked good plants and b) were a tempting price and so three were duly bought.  Three Icelandic poppies also seemed to come home with me, they were bargain too and just so pretty! 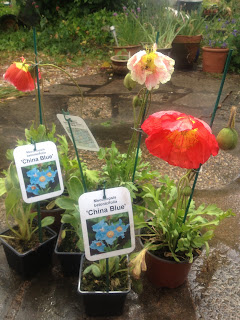 I will do a separate post on the gardens as, and believe me this surprised me hugely, they have come on leaps and bounds from the early years.  I nearly did not take my camera but for some reason did at the last minute and I was glad I had.  There were several different planting areas, smaller gardens, starter design pieces and more conceptual type gardens, but these doors charmed me hugely. 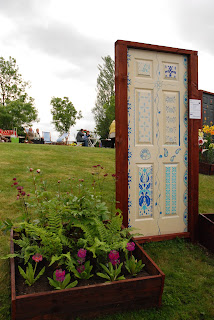 Some had better planting than door, some had better door than planting, but no matter, I thought it a great idea and I loved them. 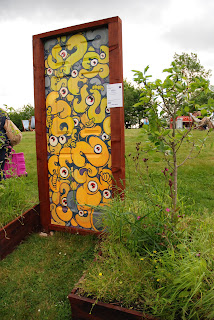 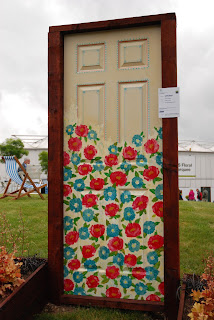 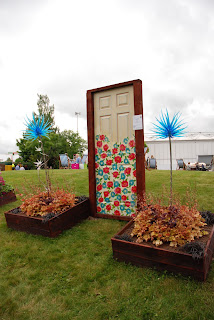 This door's planting also featured a few heucheras.  Heucheras were the plant of the show - I shall explain more in my next post. 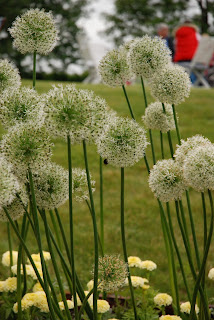 Despite the torrential downpours and flashes of beautiful sunshine, these were definitely the doors in summer. 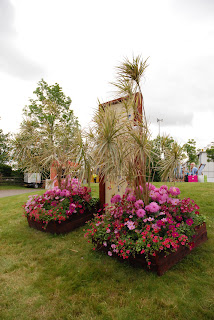 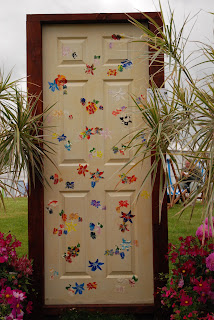 (and if you are wondering where the pretty stream like photo was taken at the top of this post, that is on the path back to the car park at the NEC, they have wonderful mainly native planting around the car parks and these dells and streams/culverts.  I thought it overlooked but hugely pretty).