A Box of delights

Or the great divide

There are few things as enjoyable as a day off from work, when you go to a great garden, listen to an informative and entertaining talk, get a very nice lunch plus access to an incredibly good nursery. It can be no surprise that I left with a tray of plants. 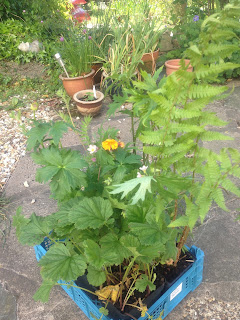 I visit Coton Manor usually two or three times a year for their Garden School sessions.  The programme is quite varied in that they have names you recognise and names that I do not know.  Some of practical courses, some are talks, some are a mixture.  They are always enjoyable and just a very nice way of spending a day.  I have already been once this year to listen to a talk from Anna Pavord (very interesting indeed) and this week I went to listen to James Alexander Sinclair.  It is probably the third time I have been to one of his sessions and they are huge fun and I leave usually with a plant or twos name written down I didn't know before and other bits of useful information. For instance I now know that before you can eat a garden snail it has to be purged and this involves carrot.  I admit I don't think I would particularly want to eat a snail but I definitely don't want to eat something that has had to be purged.  It also made me think about molluscs and other filter feeders and then shudder at their lack of purging.

Anyway, I digress, after a very pleasant lunch it was time to hit the nursery.  As has been my whim this year, I was particularly looking for ferns.  The looking for a fern led to a couple more purchases and then a couple more.  I ended up leaving with: Matteuccia Struthioteris, Trollius x cultoram 'cheddar', Geum 'karlskaer',and Polemonium carreum.  I also bought a really nice plant for the bog garden but the label dropped out between buying and getting it home. 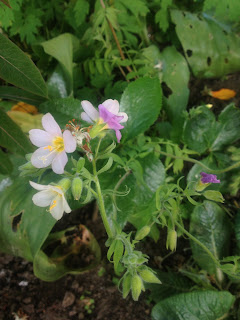 The plants cost in total just short of £30. I spent some time choosing which particular ones I was going to get.  I knew that I wanted to divide these plants when I got home so I wanted the ones with the best potential. Well, apart from the fern which is not a happy divider, or is it?  When it gets larger will I be able to just saw it up?  I bet one of you can answer that?

So, the Polemonium became 4 plants, the Trollius became 2 plants and the geum became 5 plants.  The very nice unnamed bog plant became 2 plants.  So my £28 actually bought me 14 plants in total, that's £2 a plant, now that is me happy! (Well, as long as they all live anyway).  I am finishing writing this on Sunday, I divided the plants on Tuesday, I am keeping them watered and so far so good. 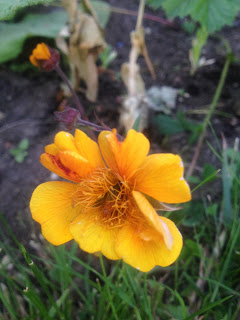 I love dividing plants for a variety of reasons.  It is plants for free and when you have limited funds then free plants are a great thing.  It is also just huge fun, any propagating is fun and it always feels a bit like performing a magic act.  You start with one plant, then suddenly you have several - that has to be magic.  It also means I can repeat a plant along the borders quite easily and that is something I do like to do.  As I look at my garden at the moment I am mentally noting plants that will be divided as I can see they have got a bit large and also that I just want to have more of.  The other benefit of dividing is that if the plant is a few years old and getting a bit large it will perk it up and refresh it.  I half wonder if they put on this new growth as some sort of plea for me to stop hacking at them, but that is only in my darker musings.

It is quite a relief when you realise that you do not need to buy three/five of everything, most people probably can't or won't afford to do that anyway, by keeping to my policy of buying one good dividable plant and growing lots of things from seed this means I can save my money to buy the more difficult plants to propagate/obtain.  After all, it is meant to be a garden, not a money-pit.