Garden no: 4 on the welsh journey - I get to Bodnant

April 21, 2013
Garden number 4 and it is a good one.  I think I first visited Bodnant Garden about eight years ago, I tried to work it out and I think it is at least then.  When I first visited I know it was a late April very hot day.  I remember wandering around the garden in the sun but I also remember liking the garden and thinking it pleasant.

I decided it was time to revisit and I am glad I did. 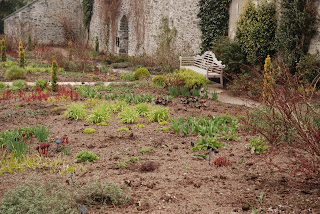 Now bearing in mind when these pictures were taken there was still snow lying around on the high and sheltered bits nearby.  Spring was in stasis and looking like it might never get going; to see this colourful early growth as we walked in was a delight.  I must particularly point out the red clumps.  Many of these are red euphorbia.  I am not generally a fan of euphorbias but I loved the striking colour of the new growth so it was added to the list of a plant to seek out.  The garden is a good example of having something to see in a border when in reality there is not much to see.  This is a good thing and something I will return to in a later post.  At this point in my holiday I was suddenly getting into my garden-bothering stride, at this point, it begins to all get a bit serious as I move from the nice and the loved to the 'this is a really good garden'. 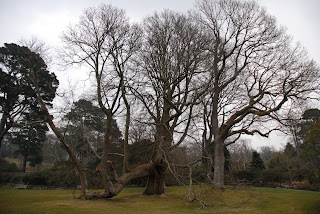 I am not going to include a photograph of the Pin Mill, either you know what it looks like or you can google it, it is the definitive Bodnant photograph.  Don't get me wrong, it is a beautiful feature and well worth photographing (I took many), but it was not what I wanted to include in this post. 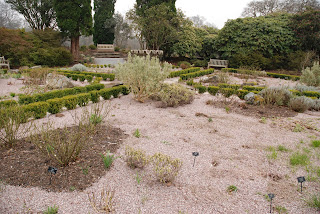 Bodnant is a good wandering around garden.  You move from fairly open spaces to some planned formal spaces like this.  Much to our amusement, the Winter Garden was roped off when we visited.  You could not get in to see it.  We wondered if this was because Winter was over so that was it, no further Winter Garden allowed!  (I assume this is not really the case, but it was worthy of a chuckle or two as we kept finding the roped off paths). 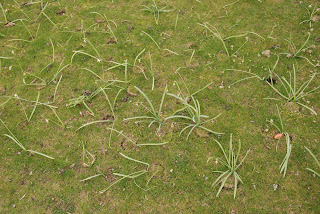 The snowdrops had just gone over by the look of things.  The little round planting marks were obvious where this new planting had been added.  This is not a criticism, it raised a smile but only in terms of how nice it was to see that planting does not happen by magic, it is the hard work of someone having to add each snowdrop one by one. 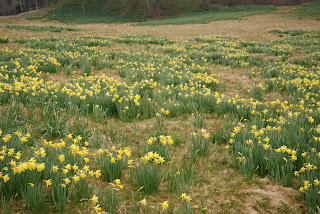 There are swathes of daffodils, a good sight and appropriate in a welsh garden. 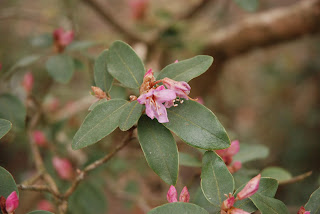 Lots of rhododendrons, lots of unusual ones that I had to photograph the names of so that I could track them down at some point.  I did mention previously I had a complicated relationship with plant labelling didn't I? 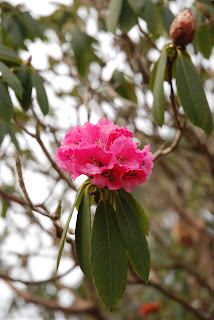 Many beautiful rhododendrons, it is their time of year and they seem to love this part of Wales in particular.  There are many plants with 'Bodnant' forming part of their name as they breed and develop their own.  So whilst this is a large (no really large) garden that is run by the a large institution there is a love of plants that is apparent. 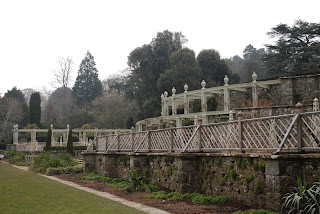 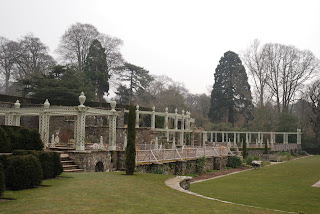 This structure was one of my favourite bits of the garden.  It houses many roses and I would love to visit again when they are in full bloom.  It is a superb amphitheatre of roses, a great construction that displays the wealth of the family that added it to their garden with a huge boot-print in the garden. 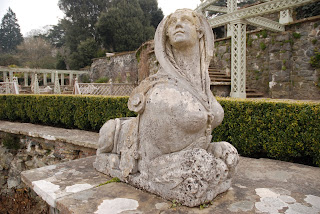 It is guarded by a pair of matching Sphinxes with rather large breasts each side of the steps that lead up to it.  She is weirdly out of proportion like a classic statue based on a Barbie doll. 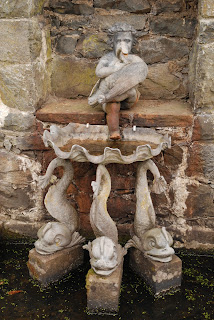 There is also nearby the boy doing something to a swan, moving on...... 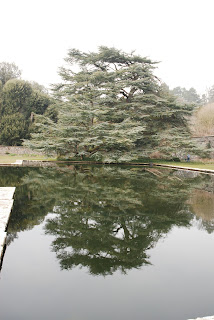 As you move up the terraces you get to the beautiful reflecting pools. 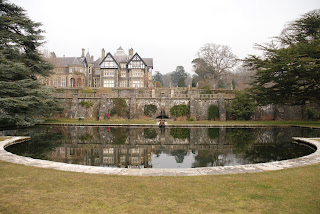 Just stunning especially as the weather was not that great when we visited, the sky was grey and I don't think we saw the sun at all. 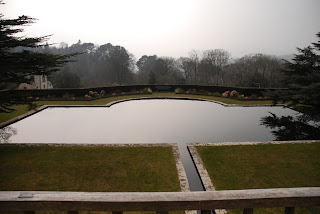 and there is a rill, I would so love a rill. 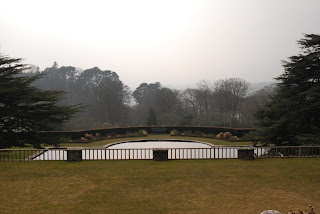 The garden is beautifully planned, it is as mentioned before, an expression of wealth.  The garden was mainly begun by Henry Davis Pochin from 1874 to 1895 who made his money as an industrial chemist.  The garden is like a huge stamp on the landscape of 'this is what we can do'.  I look at my garden as I write this and acknowledge I am doing the same, with a tiny fraction of the resources or space. 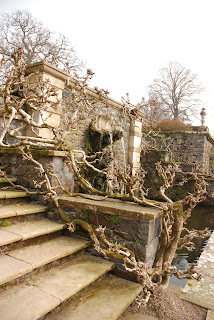 There are some beautiful touches like these ageing wisteria climbing up these steps.  There are many steps, the site is quite steep yet terraced skillfully. 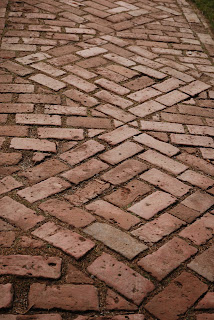 There are some amazing brickwork paths as well, very Arts and Crafts I thought. 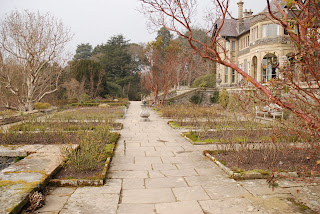 At the top of the terraces are more roses, more formal gardens.  They scream out for Edwardian ladies in long skirts walking along to take the air. 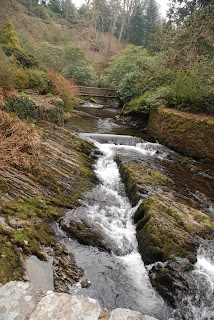 The Dell is the wild part of the garden.  As I visit more and more gardens I find myself increasingly drawn to wild areas.  I can't decide if this is because I have been doing quite a bit on my Wild Garden over the Winter, or vice-versa.  Eitherway, the Dell is spectacular. 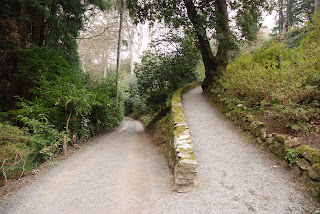 It has many paths and way to explore it.  I think it would take quite some time to try each path and explore all of it. 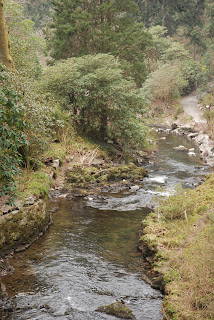 The noisy river runs through it, past the old mill building that still contains the mill wheel. 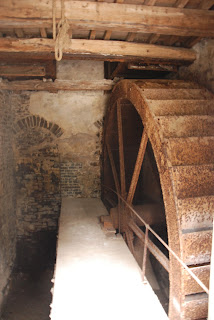 There was also quite a bit of skunk cabbage, stinky but beautiful. 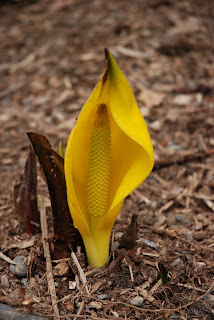 We had a really good afternoon at Bodnant, I found the gardens exciting to walk around and intriguing as I just wanted to see how they would develop through the seasons.  It made far more impact upon me than it had done previously and I will definitely visit again.  Not wishing to damn with faint praise many National Trust gardens (but I probably just did), this garden is a cut above many others.  It is a garden that has heart, and for a large instituionally run garden that is no mean feat.