March 03, 2013
This is the last in my trilogy concerning my visit to Southport.  This is where I make the big reveal, the reason why I travelled so far......... I went to have my first tattoo.

Why to Southport I hear you say?  Is there nowhere to get a tattoo done closer to home?  Well yes I am sure there are many and I am sure they are good, but nothing beats personal recommendation and I went to the studio favoured by my daughter.  The other good reason to go there was that they were having a charity day raising money for cancer charity.

This suited me very well, I have been thinking about having a tattoo for many years on and off, but I am at heart a coward and I doubt if I would have ever got there if I had had to sort it out for myself.  The tattoos on offer for the day where of 10 minute duration and I reckoned I could stand 10 minutes even if I really didn't like it.  Also 10 minutes work is not very big and being a cautious soul, I thought that small would be a good idea; after all, it is rather a large commitment, I would have to live with the results.  I had to book a couple of months ago, so I had plenty of time to think it through and to change my mind if I wanted to.

So, this is what I now have, forever, on my forearm: 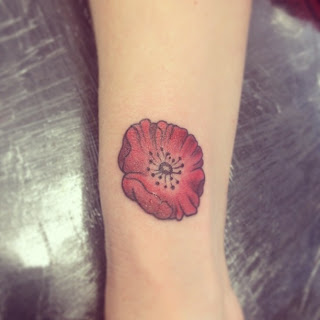 Of course its a poppy - what did you expect?  I am safe with having a poppy, I don't like poppies because my twitter name is Papaver, my twitter name is Papaver because I love poppies and have done since I was a child.  I am really pleased with it.  I have cared for it lovingly, desperate not to do anything that might upset it or make it not last.

Do not underestimate the amount of care a new tattoo needs.  It has been a fascinating experience for me, you don't just have it done and go away and forget about it.  The tattoo has had two weeks to heal now, it has gone through the goopy stage where it is wrapped in clingfilm and needs bathing and nappy cream to help it heal.  It has gone through the flakey and itchy phase and I think now it is just about there in terms of being healed though apparently it is not a good idea to totally soak it in water for a length of time for a couple of weeks yet.  This made cleaning the aquarium with the left hand only an interesting challenge!  I have been aided in my guaging of how healed it might be by managing to gouge a chunk out of my palm two days after having the tattoo done.  Seeing how that has healed has given me some idea of how the tattoo must be healing as it is quite difficult to tell; the tattoo it is an open wound and has to be looked after with that in mind.  An open wound that you do not want to scab hence the cling film and moisturising.  I would not recommend creating extra wounds as a measure though.

Also put aside any stereotypical views you might have about tattoo studios.  I didn't see one sailer and it was a bright and clinically clean space.  Focus on the word clinical, do not underestimate the care concerning hygene there is, you are in a clinical environment and subject to the health and safety laws concerning disposing of clinical waste.  If you are getting a tattoo done make sure you are going somewhere professional, it is too much of a commitment to let just anyone do it.  Do your research.

There is something rather important about my tattoo as well, it is something that is about me and my body and what I choose to do with it.  It is not about other people's opinions it is about the choices I want to make.  If I want to I can cover it up by just pulling down my sleeve, I can decide who sees it and who does not.  I like this aspect a lot. I also made a definite decision that it would be on my forearm, so that I could see it.  I didn't want one on my shoulder where I would have to look in a mirror and could pretend for lengths of time it was not there.  If I was going to do this then I wanted to see it as it is to make me happy most of all.

Now the big question is of course, will I have another?  The jury is sort of out on that one; I have already had some ideas of what I might have if I do and whilst it did hurt, be under no illusions, it did hurt, I think I can do it again.  There is much to consider though, the permanence being a key factor.   One small one is one thing, to go beyond that is quite a consideration.  Yet even whilst I am writing this I am thinking 'but that would look so good.....'

You may be wondering why we travelled up on the Friday and why I had a full day to wander around.  This is because my daughter was having her sleeve worked on, this was the third session and it will need a few more hours before it is complete.  Also, note I said several sessions and hours, that is not a small amount of pain.

My daughter has other tattoos, including one based on one of my photographs of Dahlia Waltzing Matilda that was in my garden the year before last year. This is the original photograph: 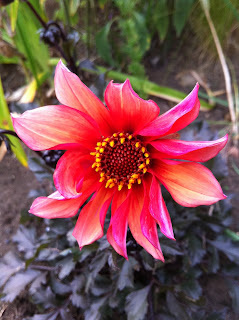 It means a lot to me that she has this tattoo.  I don't have a good photograph of the tattoo itself that should show it to its full effect, but you can be sure that I will be growing this dahlia often.

Small advert then - my tattoo was done by Juliet Preston @artycow at InKarma, Southport.