March 28, 2013
Last year I went into battle with a mouse, well it might have been more than one mouse, but I went head to head with ninja-mouse who was on a mission to eat all my seeds in the greenhouse.  The situation was resolved when ninja-mouse ate one seed too many, namely a ricinus seed and then he troubled me no more.

Until now, until son of ninja-mouse, the sequel.  Yes, again I sowed my vegetable seeds in the greenhouse and again, overnight, ninja-mouse junior ate the lot - even the chilli seeds.  I was not pleased.  I now knew that plastic snakes and moth balls had no effect.  I still am in the position that I will not use a mouse trap that kills and I am not that happy with the 'humane' ones either as I think there are several mice and I am not taking one for a drive in my car.  So I had to find another way around this problem.

I seriously considered having a cat flap put in the greenhouse, if the cats could get in the greenhouse then maybe that would solve the issue.  This is not ideal though as the cats will sleep on anything that looks comfy so my seeds my not be much better off.  I went to the internet for help and found a sonic mouse-scarer. 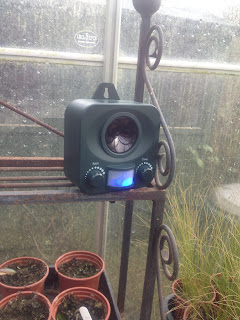 This device is primarily targeted at people who want to scare cats from their gardens.  It has a sensor and emits a sound that only animals can hear.  It said on the adverts that it could not be heard outside of the greenhouse so it would not disturb my cats as they wander around the garden.

So I installed it in the greenhouse and sowed some peas as bait.  The next day I eagerly went to check the results.

The peas were untouched. 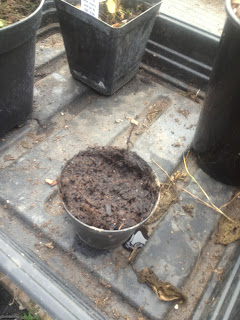 Now over a week later the peas are starting to germinate.  So now I think I can sow my seeds in the greenhouse in safety.  Well, if the snow ever stops and it ever warms up that is.

I can switch it off when I want to work in there as that will save the battery and it will also allow Chesney to keep me company in the greenhouse as it does deter the cats too.

Best of all in the evening when I stand at the kitchen window I can sometimes see the blue light of the sensor setting off.  This is brilliant, it makes me feel like Dr Evil from Austin Powers with a 'lazor', you have to say it like Dr Evil does in order to get the full effect.
This is my cat Austin, who is named after Austin Powers, she is totally oblivious to the mice. 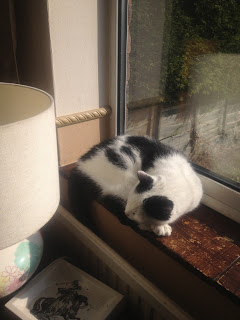