March 31, 2013
Crikey March has been cold, very cold.  There has been snow, some sun and cold and snow.  Apparently it is the coldest March since 1962, this is a much quoted fact now.  I can certainly say it has been and remains cold.

This time last year the garden was full of colour.  This year is rather different.  Looking back to February the garden seems to have hardly moved on.  The year feels on hold, just waiting. 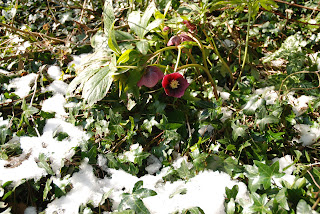 As I write this the snow has almost gone, it snowed last weekend but it has been so cold it has taken it over a week to thaw. 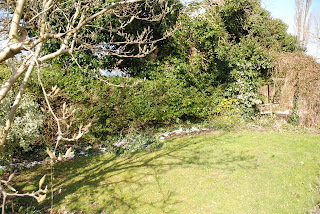 The snow lurks in the shady margins, even on a sunny day it is not really moving. 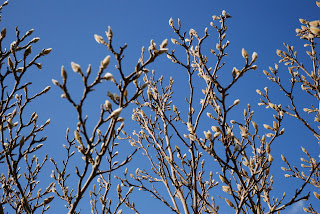 Last year the magnolia was in flower at this time, but then last year it did get frost damaged so I wonder if by flowering later it will not have that fate. 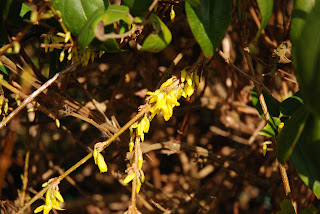 In the front hedge the forsythia is starting to flower, also later than last year.  I know some people can be a bit sniffy about forsythias, they are ubiquitous and therefore can be considered common.  Well I like them, maybe because they are common I feel a garden lacks a little yellow without one. 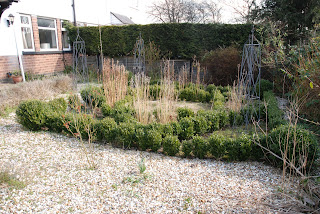 The front garden is looking ok, there are some bulbs starting to come up through the gravel and I am hoping it will look ok when they flower.  I did not remove the bulbs when I redid the garden last year, so I might have to think about how they look and whether they should still stay. 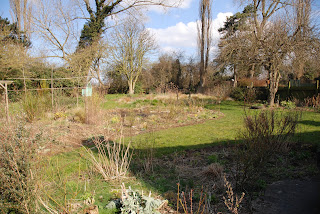 Moving to the back garden it still looks rather sparse, but the signs of Spring are emerging. 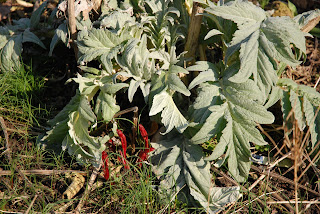 The red of the peony shoots against the cardoon leaves I think looks rather fine.  Of course this is totally planned (well, maybe not), but anyway, it is a great colour combination this time of year. 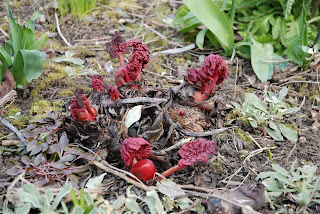 The red of the Rheum palmatum, (red rheum, red rheum), is also a welcome sight.  I planted several of these when I first moved in and I have slowly removed them as there were too many, they are rather large after all; but about three remain and I love the size and architectural nature of them. 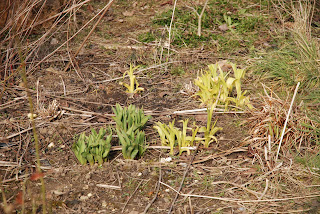 In the Pond Border the tulips and day lilies are showing, giving promise of glory to come. 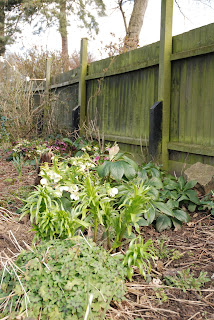 The Spring Border is getting increasingly Springy 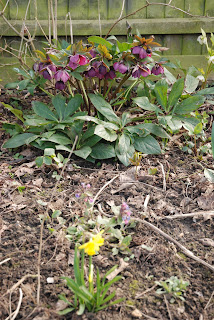 The daffodils are finally starting to flower and the pulmonaria. 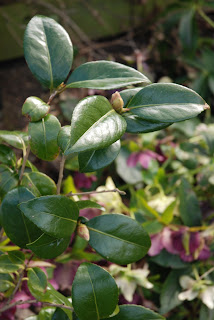 I am expecting a good show from the camellia this year, it has enjoyed having sufficient water last year, in previous years drought has led to bud-drop.  (I might glue them on just in case...). 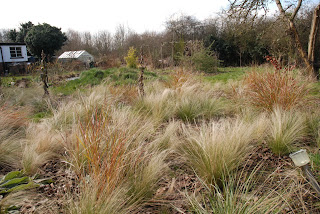 Looking across the Prairie Borders the grasses are still looking good, they need cutting back really but I have been waiting for the cold to go.  Who knows when that will be? 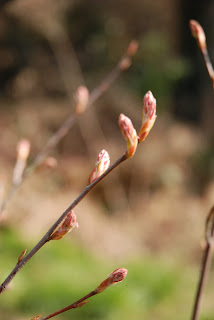 The amalanchier is getting ready to flower. 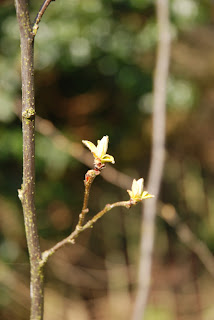 We are also now on 'Quince-watch', I am almost holding my breath to see if I will get blossom this year. 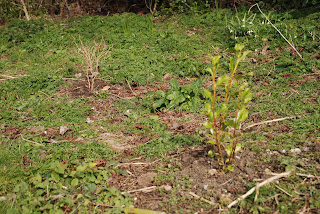 The wild garden has had some planting this Spring.  A Prunus incisa 'Kojo-no-mai' in the background and a Griselinia littoralis in the fore-ground.  The Griselinia can look a bit like a bit of dull-ish hedge, but in my mind it is has the potential to be like the 'Dancing Tree' in the Gwyllt at Portmeirion, it is a magnificant specimen and who knows, one day my twig might reach that greatness. 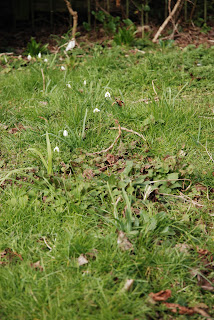 The snowdrops are still in flower, they seem have to lasted weeks this year, the cold is not necessarily a completely bad thing after all. 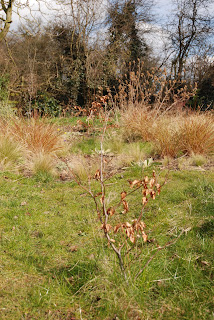 I am hoping for great things from the beech pillars this year.  Can't you see them?  They are the twigs, but one day and in my head they are pillars. 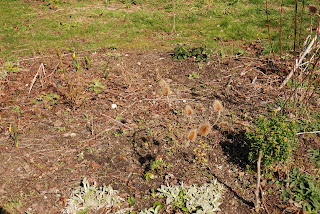 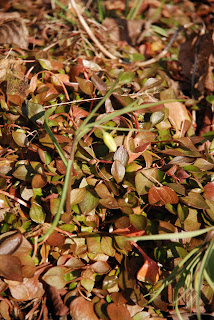 but the snakeshead fritilleria are starting to get ready to flower. 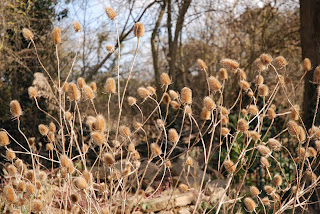 The teasel patch is still looking wonderful, but I will probably cut it back fairly soon to let the new crop grow. 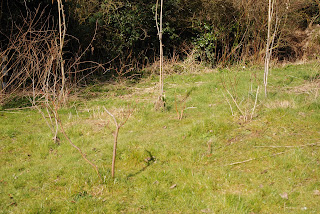 Another new patch of planting is the Four Sisters.  One sister has been there a while, the Carol Klein acer, now it is joined by an Edgeworthia, a Philidelphus Belle Etoile and a Clethra.  I hope they are all happy together. 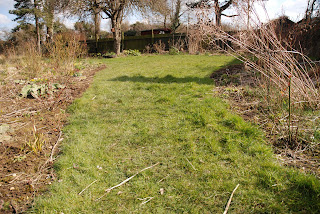 I look along the Long Shoot and think that the grass will need cutting soon. 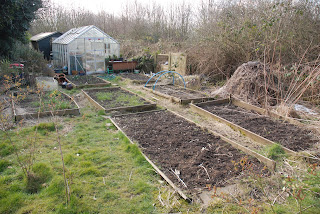 The veg beds look sparse.  The potatoes are chitting in the conservatory, I should get them out side really but the ground being frozen solid is not a good thing. 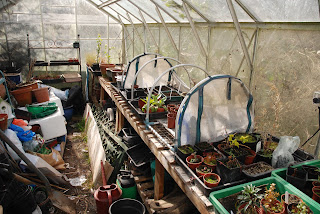 The greenhouse is filling up a bit, some plants just keeping warm for a little longer before I can put them outside. 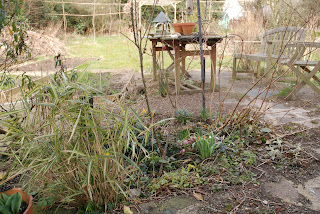 I rarely if ever show this border, its the unnamed unloved border.  It is a small island in the funky retro crazy paving.  It contains a scrubby bamboo, my beautiful Cistus that moved with me from my last house and flowers for about 10 months of the year, a nice hellebore, a clematis the previous occupant plonked there for no good reason, a Manx fuschia, a failing hamemelis and a lot of nettles usually too.  Oh and a rose that was meant to be Gertrude Jekyll but really isn't.  Every now and again I think I will dig it all out and start again as it is actually the border I can see from the kitchen window.  Maybe this year it will get some attention, maybe..... 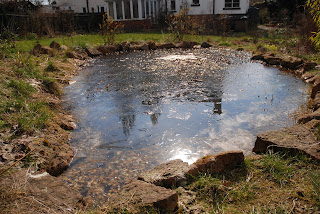 I end as usual on the pond, currently with a light sheet of ice covering most of it.  I worry about the frogspawn, will it survive being frozen?

Thanks as ever to Helen for hosting this meme.  Let's hope for a nice warm Spring in April!