March 17, 2013
I have visited  Whichford Pottery previously so when I saw they were hosting a Chris Beardshaw talk there I decided it was time I visited again.  I thought that the talk looked interesting and I did think I might have to buy another pot as well, I am very fond of the Armscote bee pot I bought on my first visit.

The day arrived, (in truth it was postponed, rearranged and then finally arrived, but I quibble).  I drove down and had a nice few minutes drinking tea and pot spotting before the talk began.  The talk itself was excellent about the Furzey Garden, the Chelsea Flower Garden that was made last year and how they all linked together.  It was a fascinating and informative talk that made me wish I had known the back-story to the Chelsea garden before I saw it last year.  It also made me think I would like to visit the Furzey Garden one day as the gardens look interesting and the work they carry out there is worthwhile and important. Being a dull sort of soul I did make some notes during the talk and things that were mentioned will be looked up and probably turn up in future posts at some point.  It was a talk that caught the imagination.

Anyway, talk over and I had the 20% discount voucher that was pressed into my hand as I arrived burning a hole in my pocket.  I had done some research on the internet before setting out as I wanted to think carefully about what I might buy.  I wanted some quite shallow wide pots as I am lacking this shape and like it a lot for growing primulas and pansies in.  I also thought I might buy a cat pot, I had liked them last year when I had visited.  Also on the website is a Green Woman planter, now I like a good green woman, they are something I have liked for a long time and I have been looking for a  stone/terracotta one for quite while.  There are several resin ones you can buy, and if that is what you like then that is fine; I want a stone/terracotta one that will age and be something from nature as a good green woman should be.  However they did not have any available which means (oh no how will I cope?) I will have to visit another time when I have saved up again.

So - the pot purchase comprised of: 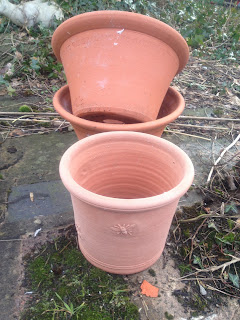 One Armscote bee pot,  I looked at the cat pots but I love these bee pots.  One day I will be able to afford a larger one, one day..... 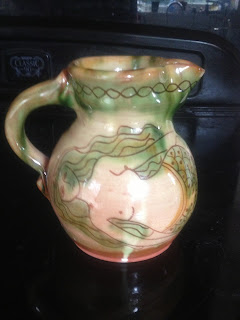 oh and Valerie, the mermaid jug with the wayward n*ps as she quickly became known.  Why Valerie, well, she was wayward, then she became winwood and that led to Valerie.

She is rather wonderful.  However in terms of wayward n*ps I think she is a mere beginner. 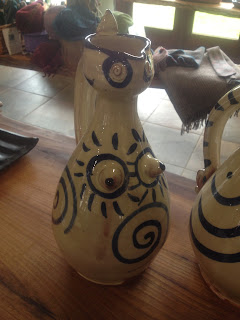 as usual I spent a bit of time coveting the dalek pot, 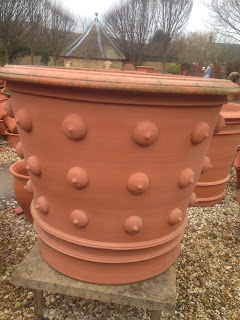 well, it is a dalek or n*ipple pot (crikey this post has a bit of a theme.....)  If I ever win the lottery and move to a huge garden that would have room for such a beast of a pot I will definitely buy two of these.  I love it it to bits as every day I would walk past them and smile.  One day......