Blackberry Tales 5 - The Boy Who Waited 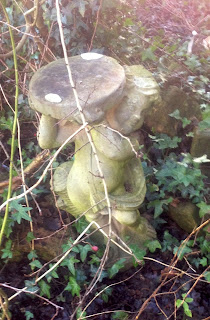 When I first moved into this house there were two things sitting right outside the back door.  Once was an ivy-covered hump* and the other was a bird bath.  The bird bath was a concrete, flouncy construction involving a boy holding a dish with his modesty protected by a draping sash.  I think it fair to say this was not something that I immediately took to.

After about a week, maybe two, but not long, he was moved to prop up a bit of falling down fence that was definitely out of sight, out of mind.  I had no idea how much a concrete birdbath weighed but I can tell you this little fella is heavy!  The dish was removed first and then the boy followed.  I promptly forgot all about him.  He had been given a job to do and he was duly getting on with it.  Sorted.

Years passed, I really had forgotten about him altogether.  I had started to think about buying a statue-type-thing to go with the piles of stones at the top of the garden in a sort of grotto-esque type way.  This is very definitely a tongue-in-cheek move, no one should think for one minute that my garden is of the type to involve a grotto, even though in many ways I would dearly love one.  This is a fine example taken during a visit to Croombe Park a few years ago, complete with Brenda, I think I would still like a Brenda really. 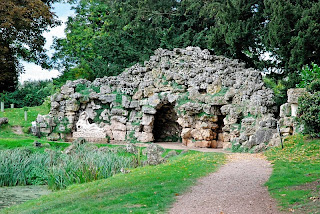 Fond as I am of Billy Birdbath he is not a patch on Brenda, I mean, just look at her: 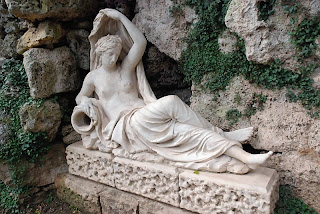 In fairness, Brenda probably cost a little more than Billy.

Last year I decided I needed to reinforce the side boundary of my garden with chicken wire to try and keep dogs from out of the garden.  I live close to a popular dog walking site and people like to let their dogs loose not on a lead.  This would be fine but they wander off too far and sometimes end up in my garden.  My cats do not appreciate this and I worry hugely for my eldest cat Geoffrey who at 19 years old is not able to run away very quickly.  So, chicken wire was being installed and this turned out to be a thorny and scratchy job as I worked my way along the hawthorn hedging.  Then I came to the bit that I had patched with a bit of wood and said birdbath boy.  Why was I looking for a Brenda when I had Billy Birdbath?  I moved him away from his task and continued fixing the fence.  I moved him to one side so I could think about him a bit more.  I mean, he is many things but he is a) not a Brenda and b) a birdbath boy without a birdbath (this is a good thing really, he did look a total twerp when carrying a flouncy bath, he now looks like a cherub waiter).

There he is, still waiting, for most of the summer he was totally obscured by four foot high nettles.  I re-found him last week as I was pruning back the hedging and checking all was well.  He had not been forgotten in the last year, just sort of overlooked.

So I took a moment to think about him again, do I want a cherub waiter in the garden or do I actually like his half-hidden, Looby-loo existence, where I only see him part of the year and the rest of the time he is free to skip and play as he likes?

Even as I think this I blink, at which point I know his fate (and maybe my own) is sealed.  He is now the blink statue, too reminiscent of the weeping angel cherubs in the final Dr Who episode for Amy and Rory in ‘The Angels Take Manhatten’.  I can almost hear him chuckling.

I walk away from him, backwards, not taking my eyes of him…..….

* the truth of the ivy-covered hump is a story yet to be told.