A visitor in the snow

January 20, 2013
The predicted snowfall arrived over the last few days.  The temperature has plummeted and the travel chaos has commenced.  Yes, it is winter proper now.

There are many urban foxes near my house, I see them often.  There is Stumpy, the one with a limp and Manky, the one who looks manky and probably other ones too but I am not the greatest of fox identifiers.  There are no chickens for them to eat here, so I don't have to worry about that, though in years gone back at a previous house one did dig up my daughter's dead rabbit causing considerable trauma.

I got home early on Friday as the snow was piling down, I am a self-confessed snow-wimp and dislike driving in it.  I was happened to look out of the window and I saw the fox approaching the pond, I ran and grabbed my camera and managed to get some photos: 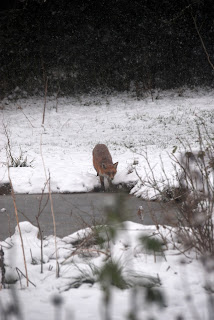 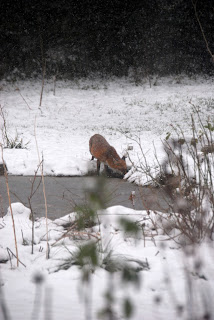 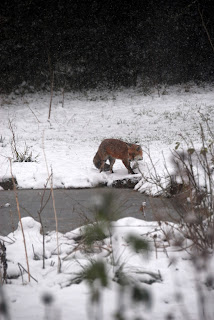 I am not sure how much he achieved in licking the ice, he was clearly thirsty, but it was rather nice to see him there in the snow.