December 27, 2012
For some reason when I win prizes, which is really not that often, the prize tends to involve fruit.  I have a real knack for winning hampers of fruit.  This would be great, except I don't like fruit so I end up giving my prize away to grateful fruit-eaters.

So imagine my joy when I win something fruit-based that I actually want.  There I am wandering around on Twitter as I often do when I come across a tweet from @VillaggioV saying that there is a 'free' olive tree available to win on their website that day, all you had to do was it find it.  So I spent a few minutes having a quick look at their website.  I could not find the tree so I gave up and promptly forgot all about it (as you do). 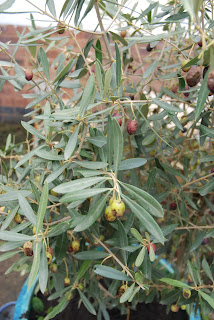 Later that day I got home and again I am having a quick look at Twitter.  Again there is the message saying that the tree has not yet been found.  Well, I had a bit more time so I thought I would have another look.  After a few minutes I found it, I could not believe I had found it, but I had.  I promptly popped it into the checkout box and claimed my prize.  I was still surprised to get the confirmation that I had indeed won and that my tree would be sent out to me. 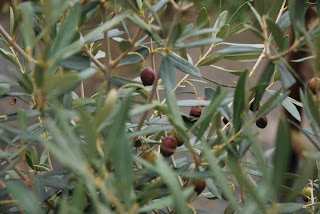 It arrived a few days later, it is a beautiful and very healthy tree.  A good size and covered in olives.  I don't eat olives so this is not particular use to me other than to look wonderful which indeed it does. 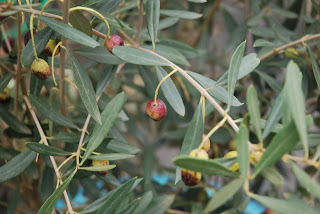 I potted the tree up at the weekend and it is now pride of place in the courtyard, where I think it looks very fine.  I was pleased that I had a large unoccupied pot that seems to suit it.  It is a Mediterranean blue I think, suitable for a Mediterranean tree.  I am very pleased with my prize, at last a fruit worth winning. 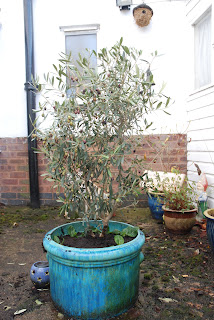