Life on the margin

or the back country.

I was going to call this post ‘the Wasteland’, I thought about tying it into TS Eliot’s poem of the same name.  I read the poem and thought again (fine poem though it is, it just didn’t work for what I wanted) and actually this part of the garden is not wasteland as such, it’s just on the margins really. 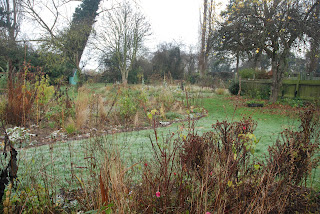 I talk about different areas of my garden a lot, I have taken the fanciful step of naming different bits of the garden; sometimes to be descriptive such as the Coal Bunker border and the Conservatory border, sometimes to amuse myself such as The Dancing Lawn.  There is also the never previously mentioned ‘hinterland’ right at the top of the garden.  I think there might be a slight incline to my garden as I do definitely feel like I walk to the top of it, there is no bit I regard as the bottom, but then as people who know me will testify, my map reading ability is interesting and often quite creative.

So, the top of the garden, the hinterland, that strip of garden just this side of the fence, it probably one of the most ignored bits of the garden in many ways.  Though on saying there it is where the Portmeirion bench is situated, one of my favourite places to sit and drink tea especially post-lawnmowing.  It is primarily part of the wild garden along its full width.  From the gingko of happiness in the left corner, past the horse chestnut which is fairly centrally placed, to the pile of stones/non-laurel in the right hand corner.  There are a variety of bulbs planted around this area but there are also the neglected shrubs. 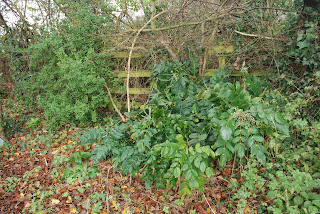 I did not plant these shrubs, these pre-existed me.  The previous owner said she had planted some thorny stuff to be a barrier and I never really thought anymore about it.  Largely because to reach the fence and thorny stuff they would have to get through a thicket of hawthorns on the other side that are thorny enough for most people.

So what is there that I have thus far totally ignored – well there is a garrya.  I don’t like it.  I removed one from my previous garden and part of me feels I should remove this one, but I actually don’t care enough about it to do so. 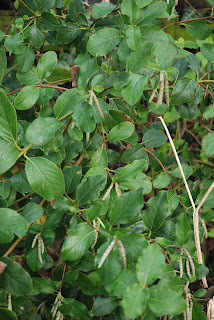 There is a cotoneaster, a poor specimen, it has a few berries but I suspect it is too much in the shade to do well.  Shame really as I like it. 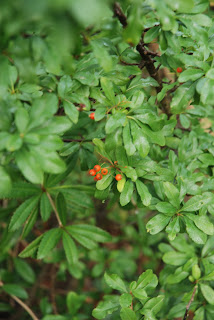 There is also a mahonia.  I knew it was there but I rarely look at it.  It is also a shrub I have had absolutely no opinion on.  I made an effort the other day to have a real look and think about it.  I suspect it too is not getting enough sun but I think I might see if I can look after it a bit better.  I think I might like it, not sure yet. 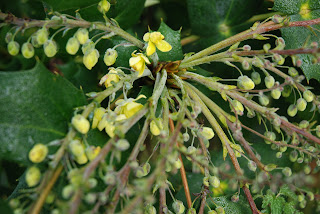 I’m feeling a bit guilty about this wanton neglect, I shall apologise to these shrubs and look after them better.  For now that thing has happened, after five years of taking no notice of them, suddenly they are on the agenda.  They have unwittingly popped their heads over the parapet and the spotlight has fallen upon them.  Oh garrya, poor poor garrya, yes I fear your days might be numbered in favour of a more favoured shrub, c’est la vie!