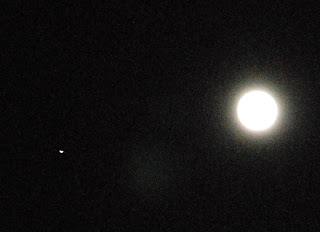 I took this photograph the other day when the moon was large and full.  As I drove home that day the moon moved from the right to the left of me and then was facing me straight ahead. The small dot to the side apparently is Jupiter, I only know this as they said it on the radio as I was driving home which saved me looking up what it could be as it was so bright and so noticeable I had already decided I needed to know which 'star' it was.

The moon is responsible for much.  I have written about werewolves previously which probably evidences just part of my choice of film watching given a chance.  Current favourite werewolf films are An American Werewolf in London (1981, John Landis), Wolf (1994, Mike Nichols) Abbott and Costello meet Frankenstein (1948 Charles Barton) The Wolfman (1941 Charles Waggner) and of course, never forget Teenwolf (1985 Rod Daniel).  Yes I like a werewolf film.  I am sure like a lot of people I cannot look at a full moon without wishing to howl (or should I say, without howling a little).

According to the man on the radio if I had some binoculars I might have been able to see four of  the 67 or so moons of Jupiter, I assume these would be the Galilean Moons that are the largest, but sadly probably not Thelxinoē of whom I have also written previously.

As I continued my drive home I realised after a while I was humming 'Bad Moon Rising' (Creedance Clearwater Revival) which features in An American Werewolf in London, the two are interlinked forever in my mind.  It was definitely a night to think about wolves.

As soon as I got home I walked around to my back garden to see it bathed in the clear strong moonlight.  I was not able to photograph this sadly but it looked amazing.  It was also a great relief to have a dry rainless night ahead as there has been so much rain of late.

It felt apt to be thinking about the moon so much as on the radio that morning they were saying that the American government of the day had planned to blow up the moon as a show of strength to the USSR during the Cold War.  This was the type of news story that did make me check whether the date was April 1st.  Allegedly we can survive ok if we do not have the moon, I have no way of assessing the validity of this but a) I would not like to risk it and b) where would we be without the wonderfulness of the moon?

As I turned away and started to go into the house I swear to you I heard the opening credits of the Clangers.