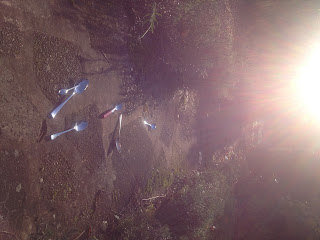 I have spent a fair amount of time thinking about paths.  Should they be hard or soft, should they be straight and narrow, wide and curvy, uphill or downhill.  Paths take a lot of thought.

I have only ever created one definite garden path which was in a previous house where I dug up the strange slate-disc path that was a death-trap when it rained.  Never have I slipped so much or so often when using a path!  It became a rather fine (if I say so myself) york stone path.  It was 55 foot long (I measured it) and led to a row with the refuse collectors who refused to take away the refuse it created as they said they could not pick it up, so I picked up the bags and carried them to the lorry myself to show that they were not that heavy (believe me I am not a weightlifter, they were not that heavy).

Now in my garden and in particular the back garden I often stand and stare and think about paths.  Should the lawn just really be a series of grass paths?  Are the paths I cut through the wild garden in the right place?  Is there a natural movement around the garden that is facilitated or inhibited by the paths (or lack thereof)?  Is the crazy paving that makes up the path to the front door really at the fore-front of retro design and in fact totally cool?

I am very aware that I tend to walk around the garden to a certain route.  I have to make myself vary it at times as otherwise I only ever see things from the same view.  Approaching from a different direction and angle can reveal all sorts of interesting things.

This all matters for the garden is more than the plants and the composition, there is also what makes the garden whole.  The paths around the garden are there to guide and shape how you view the garden but most important of all are the times when you go rogue and just wander around irrespective.  The paths matter and wandering from the paths matters too.

So there might not be a spoon, but there is always the garden and for me it contains the soul, the essence and the essential.

Crikey – think I shall watch the Wizard of Oz next, as I definitely not in Kansas anymore......