The Trial 6 - enter the geraniums

September 13, 2012
Or is it enter the pelagoniums?  Sometimes these are referred to as pelagoniums, sometimes it is the scented ones that are called pelagoniums and sometimes they are called geraniums.  These are no relation to the perenniel geraniums that I also grow (and of course these are perenniel in warmer climes, it is the frost they cannot cope with).  I believe that both species of plants can be correctly called geraniums, but that is just confusing so I will refer to them as geraniums for this post as that is what it said on the box!  My mother loves pelagoniums and liked them in nice neat rows interspersed with tagetes in the front garden.  I have grown them, on and off, for several years.  I particularly like them in terracotta pots, there is something a bit mediterranean about it in my view.

So I was delighted to receive two different sorts of plugs of geraniums as part of the Thompson and Morgan trial.  Saxonia Red and the GeRainbow collection.

They arrived in good condition. 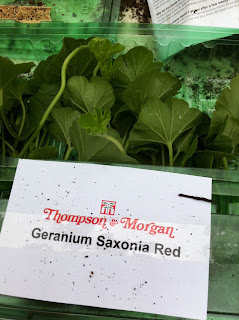 So I potted them up in the greenhouse as it was still a bit frosty at night at that point.  After a few weeks I potted the Saxonia Red into terracotta pots and put some by the back door by the gravel garden and another set of them near the conservatory door where the evening bench is. 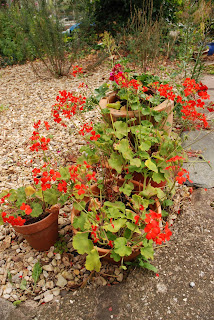 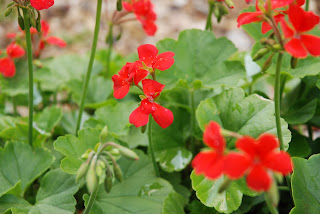 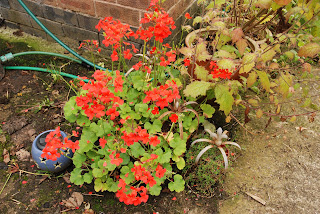 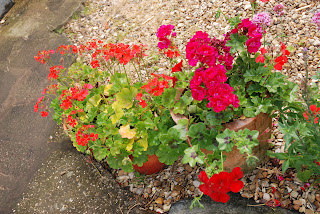 These Saxonia Red have flowered all summer long, I deadhead them regularly and they just keep going.  They are the colour of 1960s lipstick and have just been wonderful.  I confess, I still do not like the smell of the leaves, I do find them quite unpleasant, but if I don't sniff the leaves, funnily enough I don't smell them, so this is a hardly a real problem. 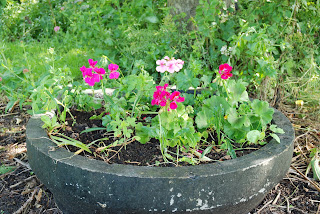 The GeRainbow Collection (I kept thinking that GeRainbow was not a great name, but then I realised it was probably a shortening of 'geranium', still not keen....) I mainly planted in the strange concrete planter under the Bramley tree.  This planter was there when I bought the house and as it is concrete I can't move it, so I have to use it where it is.  I did wonder if it would be too shady under the tree, it is a very large old tree.  I knew however that the sun comes in at an angle and that that area does actually get some sun.  So I planted the pelagoniums with some of the T&M gazania seedlings (a separate post for them to come). 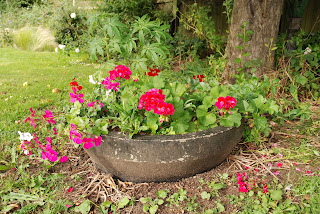 The GeRainbows have flowered really well, really well.  I have been very pleased with them and I have loved the strong colours too. 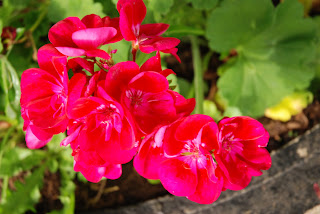 I know I have been lucky enough not to have to buy them this year, but I will be buying these as they had added such good colour. 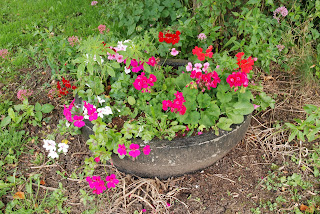 I put some in with some of the T&M Begonias as well in pots by the front door.  They have worked well there too. 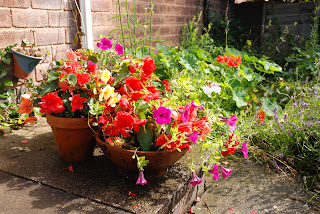 So - full recommendation from me on these.