September 10, 2012
Here we are again, September 10th.  Why does September 10th matter?  Its the fifth anniversary of moving into this house and so a good time to take a step back and think about how the year has been, mainly but not totally for the garden.

I did a post last year on this date.  I went through some of the stages of the garden and it has of course developed further in the last year.  I now have my pleaching trees and a rose hedge that is beginning to thicken up quite well.  I think it can be called a hedge now, rather than a row of roses, as I can no longer walk between the gaps in the roses, I have to use the special space left as an opening.  Quite pleased that within two years of planting it can be called a hedge. 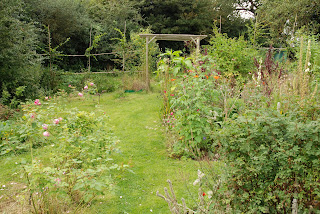 The new extension of the pond border is really coming on well. 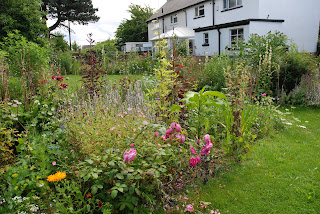 Yes things are progressing, but there has been more to this year than just what has been happening the garden.  I have a new job, I have had 'one of those birthdays' but most importantly in some way I have turned a corner I didn't know that I was quite so in need of turning.  I'm not saying that all is now great and that nothing could improve things, that is never the case; but compared to the previous few years this one has been a good one and I am in a much better place than I have been for a quite a while.  You know how you don't always realise how grotty you are feeling until you feel better?  Its been like that. 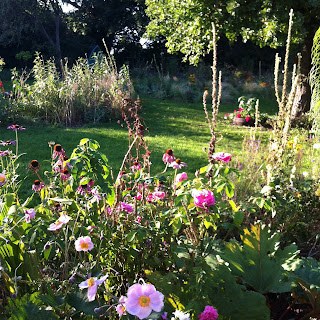 As many of you will know, I am a great admirer of Clough Williams Ellis, it was his habit to mark particularly good summers with a sign at Portmeirion.  Now I know in terms of weather many would not regard this summer as something to shout about.  As I am writing this the summer is having probably its last hurrah with an amazingly warm weekend, but most of the summer has not been like this.  Of course the gardener side of me is not that upset by this, at least we have not had a drought, but the lack of sun and cold and the constant slugs have made this year a struggle in the garden.  As I look at it now though it is full of colour and I am happy with it. So, I decided it was time for a sign, something to mark this particularly good time. 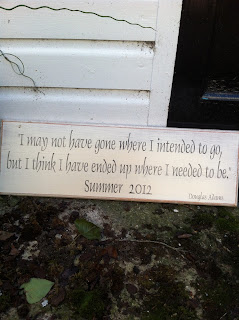 It took me a while to find the right words to have written on my sign, but when I found them I knew that they were perfect.  I like my sign and I am certain it is Sign 1, I intend to have more when they are warranted.

There also should be a song, its always good to have a song: