The last castle and no hobbits

Ah, Castle Drogo.  One of those places I had seen mentioned on Blue Peter all those years ago and it was filtered away at the back of my mind as somewhere I would like to visit one day.  When I was in Devon a couple of years ago I drove past it there and back again, but had no time to stop, so it was on my list of ‘must visit’ for this trip. 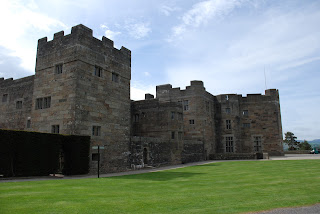 I was not disappointed.  The castle itself is a proper castle as you would design for yourself if you had tons of money and could just buy whatever you wanted (as it would appear the original owners did).   Apparently it is not named after Frodo's long lost brother Drogo, it has no connection to hobbits at all, I admit to being a little disappointed.  I believe it is the last castle to be built in England and was finished in the period between the wars.  Sadly it does seem to need quite a bit of repair, structurally it feels much older than it is materially.

Anyway, nice house, but the gardens are what this is about. 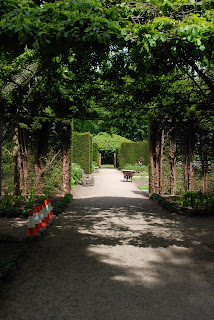 A good bit of arts and crafts gardening greeted me, designed by Lutyens (who also designed the Castle) and Gertrude Jekyll.   It is still a good garden to visit.  There are four arbours of Parrotia persica at each corner of the formal garden.  These work very well and give that balance and proportion that works so well. 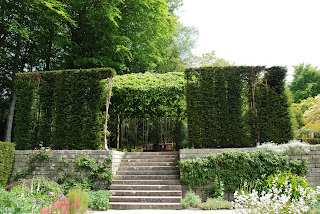 The paths work well and look designed for slow strolls on a warm evening, to reach the chairs in the arbours and to find the Vesper, ice cold, waiting for you. 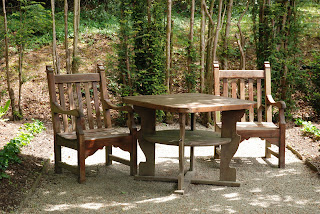 I liked this square effect in the grass, it worked well, I imagine now the roses are in bloom it looks stunning. 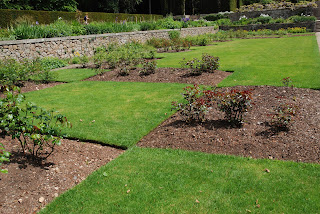 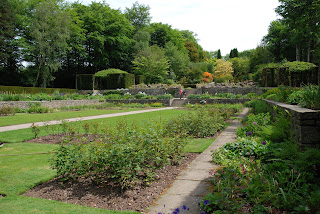 Not all the paths were straight, there were some pleasing curves. 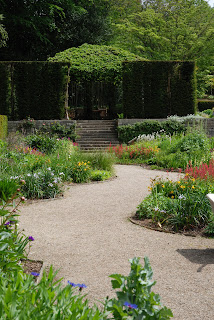 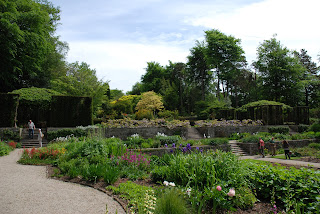 Great terracing and steps, clearly a garden where every view had been thought through and accounted for. 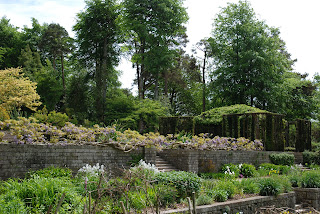 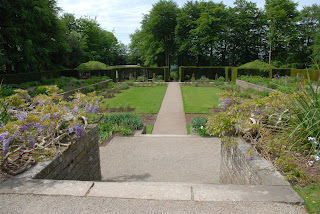 There is a good rhododendron walk which leads up from the formal garden towards the huge croquet lawn. 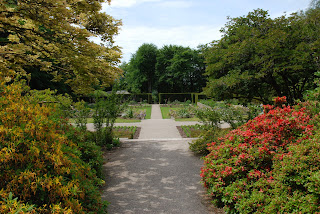 The croquet lawn is able to be used, sadly I have no idea of the rules and I think it takes more hand/eye co-ordination than I have got, it was a great space though which a beautiful circular hedge as its boundary. 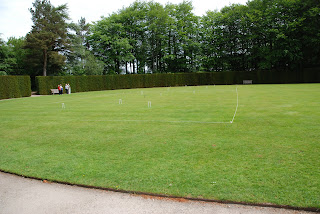 There was also this rather twee children’s play cottage.  It looked like it had escaped from an Enid Blyton book and that probably a family of bonny-faced fairies lived in it. 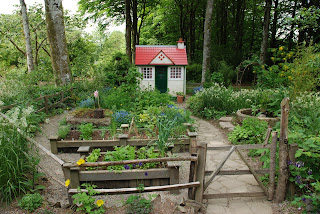 Yes, I liked Castle Drogo, not the largest of gardens but that was nice in itself, it made it feel like a real garden for a real family to enjoy rather than just a formal set-piece to show off what wealth had been accumulated.  Of course the house and garden are about wealth (you don’t build yourself a castle if you want to live a modest simple life), but it was also about home.

Only one more story to tell from the Devon Odyssey.