August 13, 2012
Last autumn I bought a Gloire de Dijon rose.  I had heard about it from the DH Lawrence poem and was pleased to find out it was easy to obtain.

It looks a bit weedy at the moment, so I keep feeding it with liquid seaweed and wishing it good thoughts.  It has just had its first flower which I was delighted to see.  Not quite as yellow as I had expected though.


When she rises in the morning
I linger to watch her;
She spreads the bath-cloth underneath the window
And the sunbeams catch her
Glistening white on the shoulders,
While down her sides the mellow
Golden shadow glows as
She stoops to the sponge, and her swung breasts
Sway like full-blown yellow
Gloire de Dijon roses.


She drips herself with water, and her shoulders
Glisten as silver, they crumple up
Like wet and falling roses, and I listen
For the sluicing of their rain-dishevelled petals.
In the window full of sunlight
Concentrates her golden shadow
Fold on fold, until it glows as
Mellow as the glory roses. 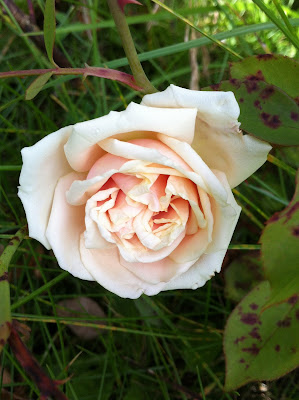