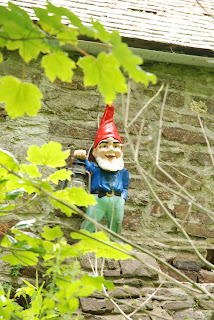 I visited the Gnome Reserve in North Devon whilst on my trip away.  A recommendation via twitter led me to this place.  I am not sure what my hopes were on visiting, I think I expected to be mildly entertained but I had a better time than that. 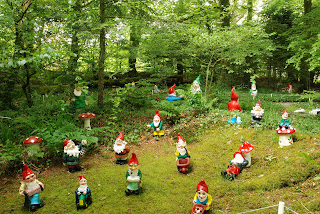 Do not go to this reserve unless you like gnomes, I think it is fair to say that there are many gnomes there engaged in all sorts of events and past-times. I currently own three gnomes.  For many years there was just the one, Sam, bought for me when I was about ten years old from a place we used to drive past on our frequent holidays in Norfolk.  I have cherished Sam, carefully bringing him indoors every winter so that he didn't fill with water and his head pop off when the water froze (this may be a gnome myth, but I stuck to it for years).  This practise was rendered useless by my then husband knocking Sam over one day and knocking his head off.  The head was duly stuck back on, but I can still see the scar.  I bought a small, very cheap gnome a couple of months ago on a whim to keep Sam company and I came away from the Gnome Reserve with a very small reminder too.  I think I am safe though that I will not reach the amount of gnomes the reserve has for a while just yet. 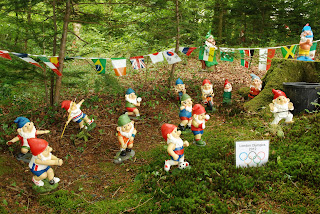 It is a family run business and it is all very gentle and charming.  I was thankfully allowed to enter without wearing a gnome hat, though I was assured it is generally pretty much compulsory. The reserve is set in a very beautiful wooded area by the house.  It quiet when I went as it was not yet school holidays, but there was a family or two wandering around as I did and it was nice to see the young children wandering around in this beautiful setting enjoying being outside. 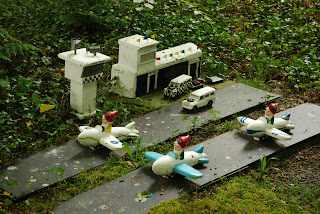 There are fun tableau as you wander around, there are airports, cars, even a space rocket. 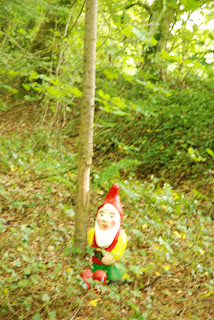 I wasn't sure if this one wasn't a stalker gnome though.  As I continued my wander around it felt like the atmosphere got darker. 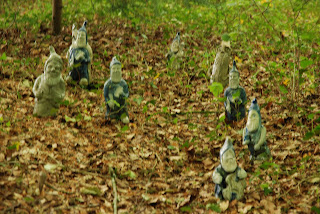 Some of the gnomes were less colourful, less friendly looking, 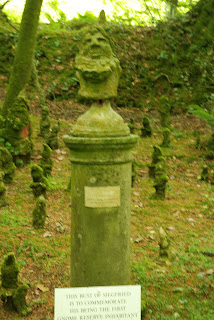 this is a monument to the first gnome, the one who started the collection off.  He is surrounded by many ageing gnomes, 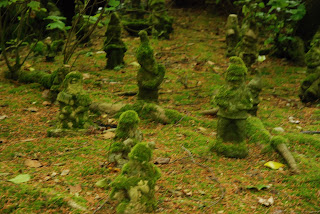 the ghost gnomes, mere shades of what they used to be.  It made me think of 'The Children of the Stones' for some reason, I had recently re-watched this, it had scared me badly when I was younger and there was something about this gnomes and the people who embodied the stones that felt a little too close for me.  It was a relief to walk out into the sunshine again.

After visiting the gnomes I then went for a walk around the wildflower garden, I shall write separately on that as it deserves its own space.  For now though, should you wish to go somewhere gnomish then the Gnome Reserve is for you.  It is quaint and gentle and they make nice cups of tea.  I decided it was a truly wonderful way to make a living.