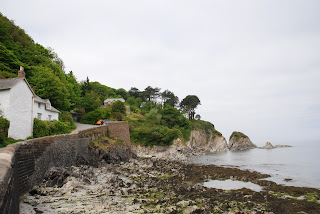 One of the joys of Twitter is that you get to talk to some lovely people and get to visit some beautiful gardens.  On the second day of my Devon trip I went to visit Cliffe gardens near Ilfracombe.  I mentioned previously that my sat nav was a boon during this trip, well on this occasion it was a boon and yet also it needed some interpretation.  The first route it tried to take me I did not like the look of very much so I decided to ignore it and force it into finding me a second way.  This it eventually did but it did still take me down a very narrow, very twisty and at times very steep route that I was thoroughly relieved not to meet anyone else on one of the bends.  To be told I had gone the 'hard core' route when I arrived at my destination made me feel both brave and foolhardy at the same time!  I drove back the recommended lower, safer route.

On arrival at Cliffe my first consideration was where to park, it is on a very steep road.  I pulled in and decided to park just down the road, but when I considered how much I would worry about my car being left on such a steep incline I reconsidered and parked at the bottom of the road in the village.  The scene back up the road to the garden was so beautiful and it was a lovely, warmish day. 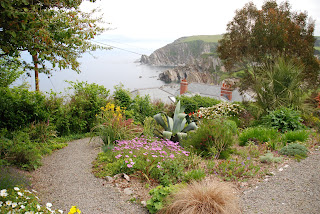 I wandered into the garden, paid at the honesty box (I love honesty boxes) and started to look around.  Almost immediately I bumped into Gill Heavens, the gardener at Cliffe, who had invited me via Twitter to come and have a look around.  Had she not have done this I would not have known about this garden and I am so glad that she brought it to my attention.   The owners of the garden live just down the road a bit, the garden is not joined to the house.  Immediately on entering I was struck by the paths and planting.  Paths are very important, they guide the journey and present one with choices.  A good garden is created as much by its paths and journey as it is by its planting. 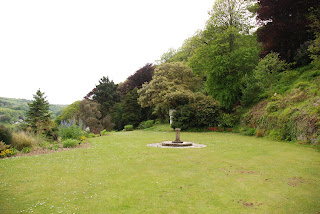 Gill was just about to start badger-damage repair when I arrived.  They had been digging up the lawn and some of the planters near it.  I am so lucky that the worst I have to contend with are foxes and cats.  I really liked this lawn, at one point apparently it had been a tennis court, but it was a great plain of green that gave breathing space to the garden.  Gill kindly offered me the grand tour and I gratefully accepted.  Whilst I love wandering around gardens on my own, a gardener showing you around their kingdom is always a treat. 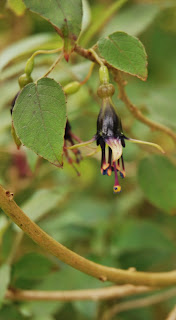 and a treat it was.  Gill explained that the owners of the garden particularly like fuscias.  Some quite unusual ones too like this one.  Close up it looks quite interesting but in reality on the bush it is quite small and almost unnoticeable.  It also looks a bit like a dead flower to me too - I was not sure I actually liked it. 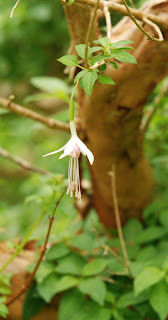 This pale pink one though, further along the path, I liked a lot.  Not just the flower but also the bark of the ageing shrub.  I am not a fuscia-lover as such.  I grow the tough, hardy manx fushcia and I have some Thompson and Morgan fushcias growing as part of the trial I am doing for them, but I find many a bit blousy.  This one though I liked a lot and Gill kindly took some cuttings for me before I left.  These are currently in the greenhouse and looking ok.  I am hopeful they will take. 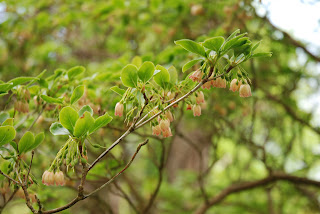 We climbed the top path around the garden, Gill explained they had recently had to have a large oak removed.  It had let a lot of new light into the garden and created the opportunity for new planting. 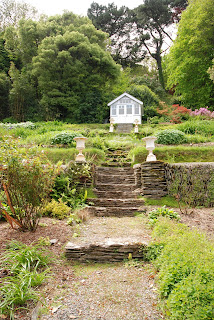 Further around and moving back down into the garden we came to this terraced area with a summer house.  The proportions were wonderful though as Gill explained, not really suitable for identical planting each side as it never works well.  One side of the area will always perform differently to the other and this is too apparently if ones tries to be identical.  Common sense really yet something one might be tempted to try anyway. 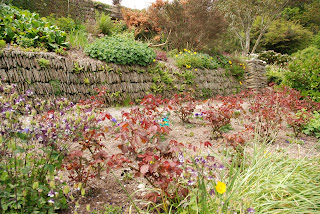 There were some good roses getting ready to bloom.  Some of these roses were planted in the 1940s so are good long-livers. 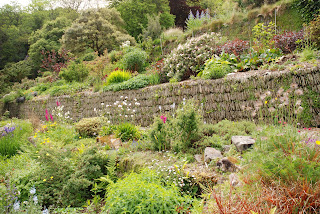 The terracing is both functional (it is very steep) and effective. 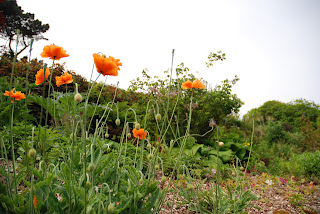 I'm not sure I would want to weed right up to the edge of some of it though, with my balance I think I would fall! 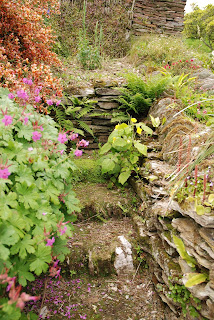 The terracing is made up of lovely, arts and crafts looking walls.  The garden originates from the 1920s and I think the influence can be seen. 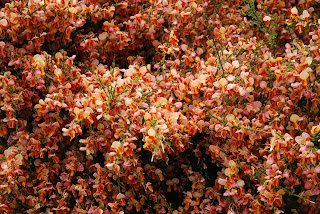 The broom that is just on the edge of the above photograph required closer examination I thought, it is almost a mess of colour and yet it looks so effective.  I am quite a fan of broom. 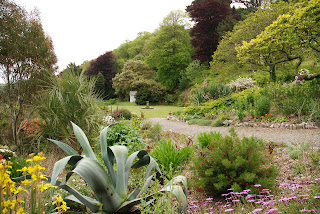 There are some good mediterranian borders, 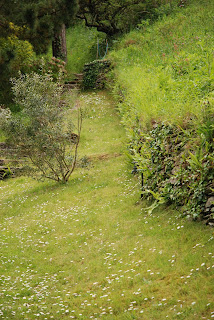 paths to lead you on through delightful sprinklings of daisies, 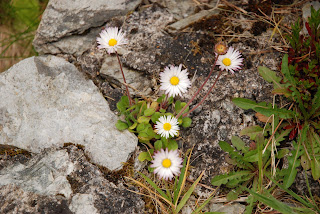 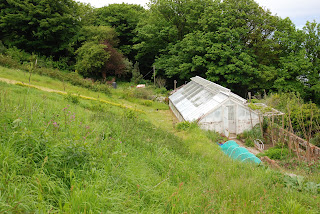 The working area was nestled away from the public's eye and also a pretty and very neat place.

As ever it never ceases to surprise me the generosity of people's time they show you around their gardens.  Gill was so knowledgeable as well, as we walked around and she named the various shrubs and plants it reminded me how little I actually know.  This is not a bad thing, it was a delight to be in the company of someone who knew their stuff and was happy to share it.

If my fushcia cuttings take I shall be so glad to have a permanent and living reminder of a glorious garden and morning.