The Blackberry Tales 3 - the banqueting floor 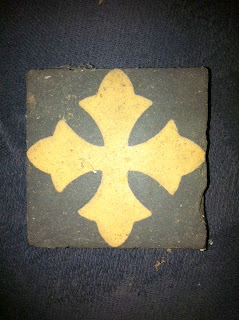 My house is a very ordinary, ex-local authority house, yet in the garden I find extra-ordinary things.  I recently dug up this.  It reminds me the hall floor of the house I grew up in which was made up of very nice Minton tiles.  I have no idea where it comes from, I doubt if it came from my house, so I can only assume that it comes from the banqueting floor that is buried under the garden that hails from the Victorian spa hotel that disappeared in the great earthquake of 1919.  Every now and again tiles from the floor work their way upwards from this great building which is largely spoken of as if it is just a legend or a local myth.  Some people even dispute the existence of the earthquake as it was quite specifically localised on this postcode.  Some people have even suggested a pure invention, by a rather fanciful gardener (surely not!)

but what other explanation could there be?