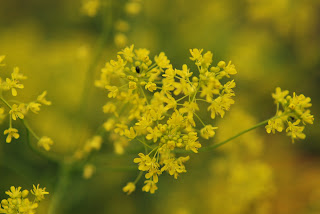 I first starting growing woad (Istis tinctoria) about three years ago.  I went to Chelsea Flower Show and it was a popular plant that year.  I am as liable to follow trends as many other people are and this plant seemed so beautiful to me, so ethereal, that I had to have it.  I ordered some seeds and waiting expectantly for them to flower. 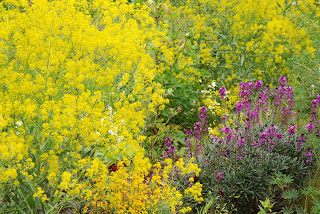 What I did not expect was how amazing the sight of clouds of woad would be.  Every year they set seed and every year I have more.  The more I have the more astounded I get at its beauty.  This time of year it is a firm favourite. 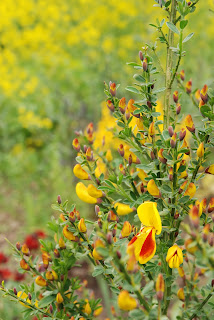 Now some people are not a fan of yellow in the garden.  They see it as problematic.  Heaven forbid you would grow two yellows together, that would look dreadful...... 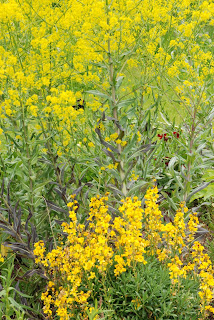 .....really awful in fact - totally tasteless to have more than one shade of yellow in the same space ...... except I rather like it.  In fact, I think it looks rather good. 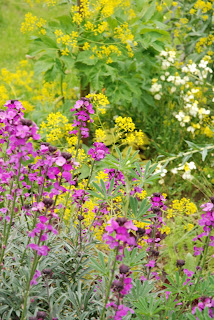 It is probably considered a mistake to put cream and purple with it too.  Oh well, not in my world. 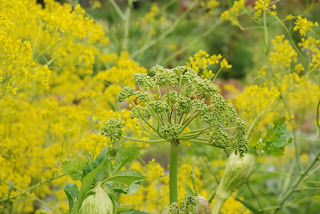 The fluffy flowers show off the shape of this angelica as it makes ready to have its own show. 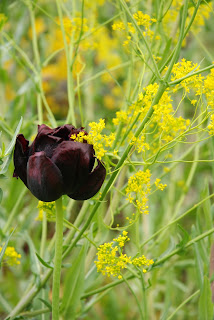 The acid yellow shows off this dark tulip to perfection.

Another bonus of woad is that on a still, damp, late Spring evening the scent of honey that it gives off is incredible.

If I had the inclination I could use my woad to create blue dye from its leaves.  It is one of the first natural dyes that people used. The Romans noted that northern Britains used to colour their skins with woad, the word 'Picts' comes from 'painted ones'.  Woad has also been used medicinally, though it has some side effects including death which I think makes it a little risky, I think I'll just use it to paint my face blue instead and run around shouting 'liberty' (this is a confusion from a couple of films but in my head it works quite well). 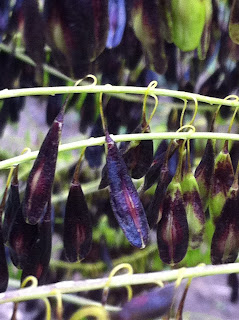 The flowers are not the end of the story, in a few weeks time I will have veils of beautiful seeds to enjoy as well.  Woad is a seriously good plant, easy to grow, it self seeds quite politely with the seedlings being easy to spot and edit out.  I thoroughly recommend it.