May 31, 2012
Crikey - May over already! How did that happen?  Five months through the year already, this year is spinning by.

Its been a challenging year for the  garden, its been cold, frosty, dry and very wet and now it has also had a heat wave too.  Who knows what next the weather will through at us?  The garden though it happy at the moment.  All the rain has given it a good start and now with the heat the flowers are starting to open.  It is suddenly very definitely the growing season. 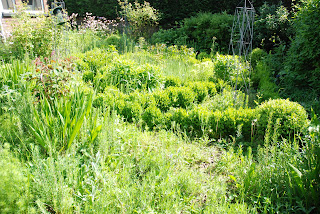 The front garden is still largely green.  I wait, as is tradition, until Derby Day, to trim the box hedging.  Of course this is not unproblematic, which Derby Day?  The one we have now, the original one? (which moved as it was related to Easter), but its most generally been in the first week of June even if they can't quite stay on a chosen day. 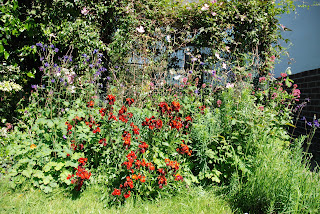 This is a new bit of border in the front garden, largely dominated by wallflowers at the moment but it is a nice bit of colour. 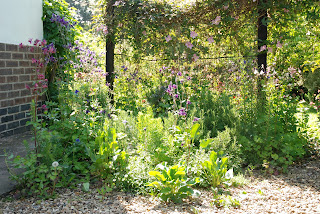 The other side of this border is the gravel garden.  This is mainly aquilegias and Valerian at the moment.  The sea holly and the Mexican daisies are yet to really get going. 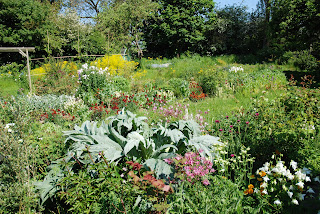 In general the back garden is showing colour now.  The artichokes and aqueligias in the foreground, with the woad clouding away towards the rear.  I really like the billowy nature that the garden has taken on. 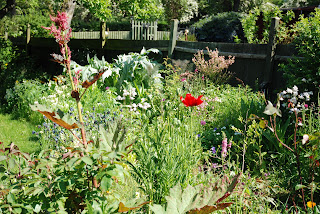 My first oriental poppy is now open and the rheum is flowering too.  Both are great favourites. 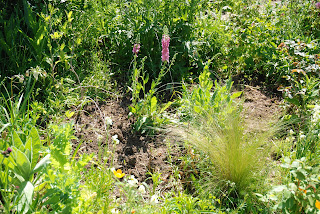 I have also cleared some space in the Conservatory border, it was choked up by ox-eye daisies and geranium phaem, now I have somewhere to put some of my many seedlings from the greenhouse. 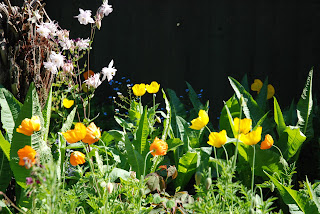 The welsh poppies are doing very well, here they are with teasels and the dead tree fern.  The dead tree fern has been dead about three years now and even though I have not yet dug it up, it stubbornly remains dead. 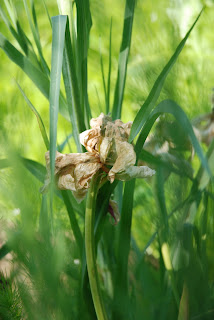 The tulips are now past it and dead.  The heat finally finished them off. 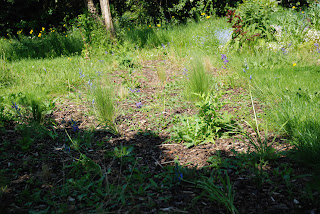 The prairie borders still look quite scrappy, the camassias are flowering but are lost with not enough around them to give real effect.  I have bought some more stipa tenussimia seeds and will get some more put in before the end of the year. 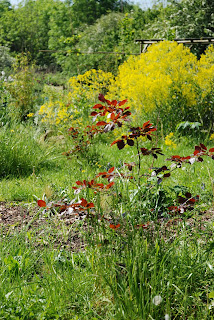 The beech pillars, which are currently twigs, are coming on well this year, well the three long term survivors are, the two new replacements are looking a little slow (which may be a sign they are dead). 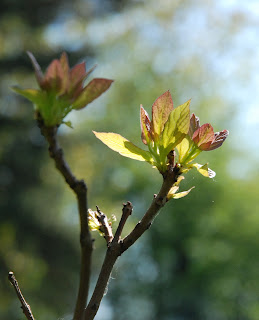 The catalpa is starting to get leaf.  It is always later than most of the other trees, but always worth the wait. 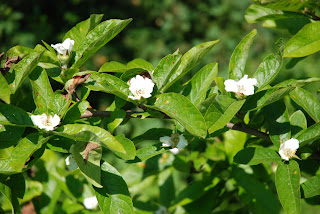 The medlar is suddenly covered in blossom. 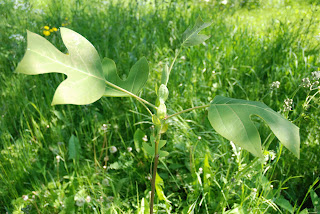 The new tulip tree is just a total joy.  Growing like good'un!  What a great addition to the garden. 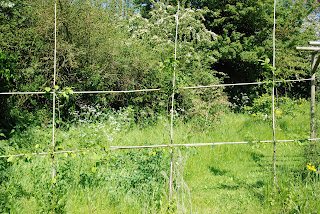 The pleached hornbeams are pleaching away and creating the distinction I wanted between the formal and wild gardens. 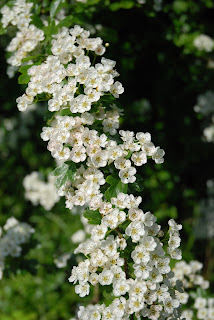 The hawthorns that create part of the boundary hedge are looking amazing. 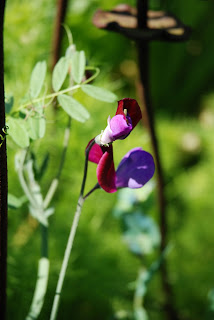 My first sweet pea is open and its Cupani, probably my all time favourite. 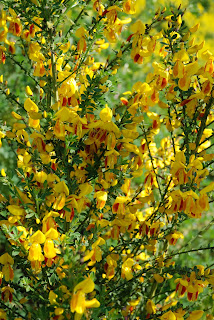 This broom is flowering like it is on fire.  Its done nothing for about two years but suddenly it is the most incredible shrub and making itself into a real statement. 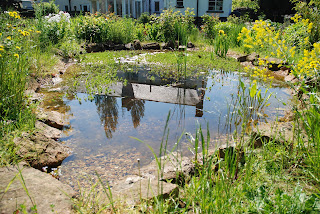 The pond is still quite full and teaming with life.  It is still full of tadpoles and now it is alive with damsel-fly nymphs emerging from the water.  The electric red and blue flashes of the adults are dancing over the surface laying more eggs for next year. 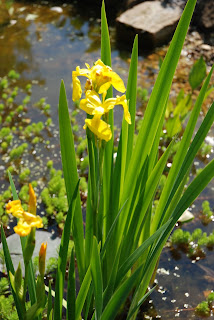 and the yellow flag iris are now flowering in the pond.  That has made me very happy.

So May has been a good month, full of promise and potential.