Snakes in the greenhouse

I sowed some sweetcorn kernels and courgette seeds a couple of weeks ago.  The next day when I went into the greenhouse I found to my horror that something had eaten them.  I am blaming a mouse, but in fairness (if you can use the word fairness after arbitrarily blaming someone) it could have been a vole, a pygmy shrew or indeed a rat as any of those sharp toothed rodents have been seen in the vicinity of my garden.

For the purposes of this blog and as far as I am concerned though, it is a mouse.

and its not Mrs Frisby, this is not a nice mouse, it is a mouse that eats my seeds and runs around nibbling stuff every night.

It is not a mouse that is starving, in need of feeding its family or any sort of sob-story you wish to give me.  This is ninja-mouse, that slides soundlessly into my greenhouse, clothed in whispering black silk, and creates havoc.  In no way have I sympathy for this mouse. 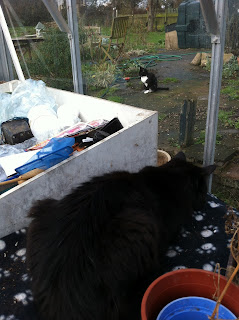 Those of you who follow this blog or me on twitter will know that I have some cats.  Some cats - ok, I have four cats.  Geoffrey is geriatric (19 years old) and even when younger never bothered to hunt anything.  Austin is younger, but a strange cat who lives mainly in the conservatory and specifically where-ever Chesney is not.  She has hunted in her younger days (she is now 13) but now can't be bothered.  Lawrence (also 13, he was found in the same plastic bag Austin was, dumped in a supermarket car park), is a hunter.  He mainly catches pigeons but also mice and pygmy shrews are his speciality.  He can be found sitting by the compost heaps particularly at dusk.  Chesney is my youngest cat, a mere 1 year old, and too silly to hunt anything.  He thinks about it, but as he tends to run and jump at things like a bag of potatoes he is rarely if ever successful.  He is also the only one of my cats to have a bell on his collar, this is largely to warn the other cats that he is around.  I did, many years ago, fit bells on all their collars, the sound of the bell seemed to attract furry things to Lawrence, he killed more, so I took it off as it is a habit that I do not find attractive in cats.  So why am I telling you all this, because I have four cats and a mouse problem!  Of course, ninja-mouse is not stupid.  Where is the one place shut up all day and all night when I am not in it?  The greenhouse!  It is a safe haven for him. 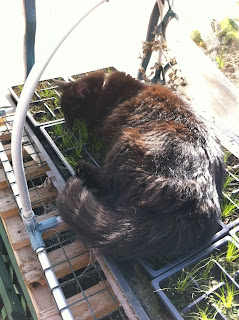 Actually, I say he is not stupid, but he is eating all my organic slug pellets.  They must taste nice and they boast they don't harm small animals and birds.  I can confirm that this must be the case because he is living off them!  I only use slug pellets in the greenhouse as that is where I have the biggest slug/snail issue (protected area from the birds - so safe for them).  I am convinced the ninja-mouse is in cahoots with them.

So I resort to twitter to bemoan ninja-mouse and I am given two main bits of advice.  Firstly - get a humane mouse trap.  Now that is sort of attractive, but sort of not.  I could not use an inhumane mouse trap, they are horrid; but if I successfully caught the mouse what would I do with it?  How far would I have to take it and it is not going in my car anywhere - what if he escaped?

The second piece of advice was buy a fake snake and mothballs.  This advice was duly followed.  I move the snake around every day and the greenhouse reeks of camphor.  I quite like the camphor smell it turns out. 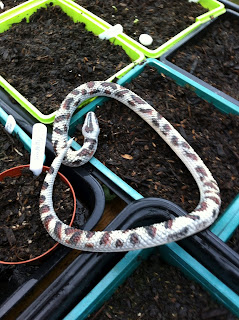 It turns out that ninja-mouse also likes the smell of camphor and laughs at my fake snake.

Back to square one then..... or is it, the non-stupid ninja-mouse ate my ricinus seeds I sowed the other day.  Now according to wikipedia, ricinus is the most poisonous plant in the world.  Eating the beans is not a good idea for any person, never mind a ninja-mouse!  Has my mouse issue got a bit better, well yes it has.  I do not know for certain he has been poisoned.  He might have just finished eating all my seeds and young plant shoots.  Am I sorry to see him go?  No.  Did I hope that the silliness of snakes would scare him off?  Well maybe not really but it felt a humane way of dealing with the issue.  Did I think he was stupid enough to poison himself?  No - but it appears he may have been.  He must have been the apprentice ninja-mouse and was not even in the game long enough to get fired.