April 05, 2012
Well, ok not the Reverend himself, but one of the plants named after him. 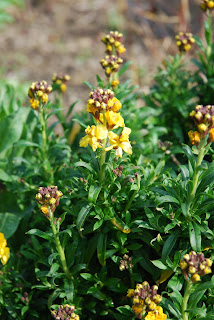 This is Erysimum Cheiri 'Harpur Crewe', named after the Reverend Henry Harpur Crewe who 'rediscovered' the plant, thus leading to its name, in the mid/late 1800s.  This begs the question, how can you rediscover a plant?  You either discover it or you don't.  Had someone lost it? 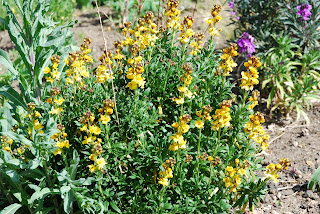 Unusually for the usual type of plant I like, it has double flowers, but quite delicate ones and it isn't too blousy.  I particularly like the purplish tinge to the buds before they open to reveal the deep yellow flowers.  It is a fine plant, though has a tendency to get a bit leggy.  It does not respond too well to being cut back either.  I keep it going by taking cuttings on a regular basis, thankfully it roots easily from cuttings.  My original plant must have been bought over ten years ago, it has moved house with me a couple of times and I am very fond of it, particularly this time of year. 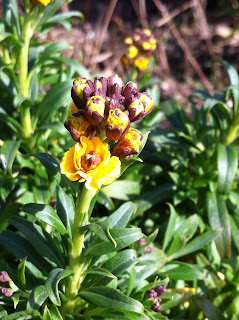 The Reverend was a keen naturalist.  He was the rector in Breadsall in Derbyshire and the nephew of Sir George Crewe who owned nearby Calke Abbey.  Calke Abbey now belongs to the National Trust and it was from a visit to there that I first heard of this plant and of the Reverend.  He also has a Doronicum named after him.  I managed to buy both plants, but sadly the Doronicum died one particularly dry summer.  I do intend to rebuy though it is a tricky one to get hold of.  Shame as it is a nice plant. 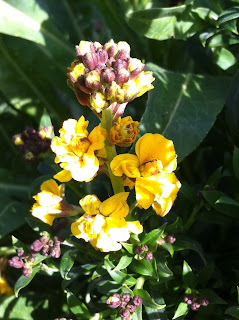 Still, the wallflower I have quite a few of and it seems to like this garden and is growing well.  I think even without knowing its history, it is a plant worth finding space for.