The Blackberry Tales 2 - The jar of souls

April 20, 2012
Since first moving into this house I have been perplexed about the amount of glass found in one particular area of the garden.  I have wondered whether a greenhouse was in that spot though much of the glass has looked like bathroom window glass.  I have found bits of broken bottles too and one actual bottle that looked quite old.

I have also, on parallel musings, wondered about why my cat Chesney and the local foxes are in cahoots to dig up my new prairie borders.  Almost every day I have to replant some of the grasses whilst I am waiting for their roots to take proper hold.

There is one hole in particular that keeps being redug.  I fill it in, a couple of days later there is dug again.  So as I wandered around the garden the other day I saw that the hole was back.  I sighed as usual and bent down to flick the earth back into the hole when I noticed that there was something in the hole.  I poked around abit (carefully) and realised it was made of glass.  One trowel fetched from the greenhouse later and I realised I had what appeared to be a large, intact, jar of some sort.  I managed to removed it from the ground.  It was about 8 inches high and 3 inches diameter with quite a large opening at the top.  It was also full of earth; 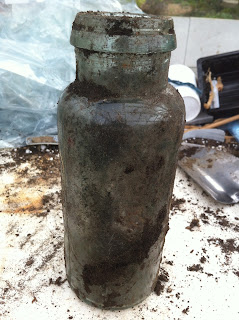 or was it earth?  I pondered emptying it, but I have read a lot of M R James stories and I know that removing posts/jars can be a bad thing to do.  So I paused and considered.  I shook the jar a
bit but the soil was fairly compacted in there.  It clearly was not a time capsule as I half-hoped when I found it, and it looked like it was just earth.

So I tipped it up and emptied it.  The earth poured out like fine sand.  There appeared to be some actual sand at the bottom of the jar.  This poured onto the ground and filtered away quickly.

That worried me, it shouldn't have done that.  I rushed inside, cleaned out the jar with hot soapy water and then filled it with a combination of a good source of C55H70O6N4Mg and H2O.   This has definitely done the trick as everyone knows a jar full of flowers is incapable of evil powers, it is turned forever to good. 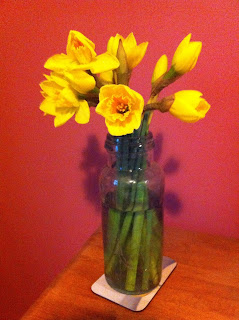 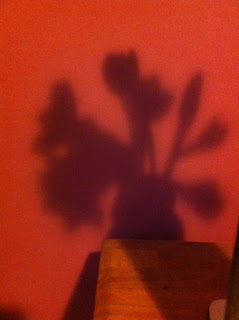