Tell me grandfather, what an elm is

March 29, 2012
How will the legend of the age of trees
Feel, when the last tree falls in England?
When the concrete spreads and the town conquers
The country’s heart; when contraceptive
Tarmac’s laid where farm has faded,
Tramline flows where slept a hamlet,
And shop-fronts, blazing without a stop from
Dover to Wrath, have glazed us over?
Simplest tales will then bewilder
The questioning children, “What was a chestnut?
Say what it means to climb a Beanstalk,
Tell me, grandfather, what an elm is.
What was Autumn? They never taught us.”
Then, told by teachers how once from mould
Came growing creatures of lower nature
Able to live and die, though neither
Beast nor man, and around them wreathing
Excellent clothing, breathing sunlight –
Half understanding, their ill-acquainted
Fancy will tint their wonder-paintings
Trees as men walking, wood-romances
Of goblins stalking in silky green,
Of milk-sheen froth upon the lace of hawthorn’s
Collar, pallor in the face of birchgirl.
So shall a homeless time, though dimly
Catch from afar (for soul is watchfull)
A sight of tree-delighted Eden.

This poem was quoted as part of Radio 4's thought for the day the other day.  After hearing just the first line I wanted to know what the rest of the poem was as it sounded interesting.  I have read the Narnia books but know very little else of Lewis's work.  I liked the poem alot.  I would say I am not a huge poetry fan, but I realise that I like a lot of poetry actually.  Anyway, this particular poem, written over 70 years ago, highlights a fear that still haunts us.  The population grows, urbanisation sprawls.  We all have to have somewhere to live and yet the cost is huge.

It also makes me think about an earlier work:  'England and the Octopus' by Clough Williams-Ellis (1928), a cry from the soul about how ill considered planning can destroy the beauty of what surrounds us.  The 1975 preface starts "This is an angry book, written by an angry young man nearly half a century ago.  Now I am in my ninety-second year and still angry because too many of the follies and abuses I then tilted against are still with us;" (Williams-Ellis C  England and the Octopus Robert MacLehose and Company Ltd reprint 1975) 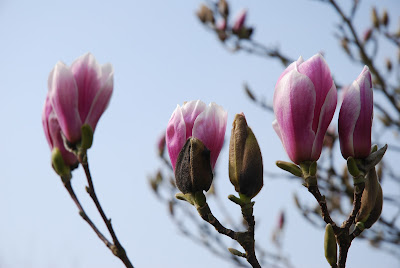