and the wind sighed Persephone


“It was one of the March days when the sun shines hot and the wind blows cold: when it is summer in the light, and winter in the shade.”  Charles Dickens Great Expectations (1860-61). 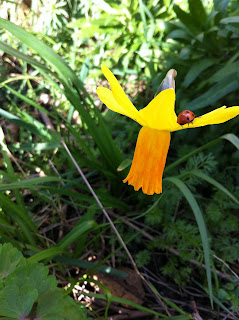 What an apt quotation for March.  As I writing this the sun is shining brightly, but there is a nip in the air.  Someone recently asked me if I was hot as I had a big coat on, but it is not quite time to be casting clouts yet I think (though I was wearing a T shirt today in the garden).  There have been a couple of frosts recently and it is premature to declare Spring just yet.

Which brings me to another quotation “To be interested in the changing seasons is a happier state mind than to be hopelessly in love with Spring.” (George Santayana).  This may expose a somewhat fickle nature on my part, but I actually want both.  I love the changing of the seasons but I also love each of the seasons – maybe equally, certainly which ever one I am in at the time I love the most (apart from maybe Winter, sorry Winter, but the dark grey January days do get me down).

But March is good – I like March.  Lots of things are starting to flower, lots of green is starting to appear.  It is about life returning.  This makes me think of the Greek legend of Persephone, daughter of Demeter (harvest goddess) and Zeus (father of the gods).  Persephone was abducted by Hades (god of the underworld).  After a period of negotiation it was agreed that Persephone would spend part of her time in the underworld and part back up top.  Demeter made it so it was Winter and all was dead when Persephone was underground and then it would be Spring when she emerged.  Bit rough really taking out her sorrow on the world, but hey, when you’re a god you can do these things.  So Persephone is often equated with Spring and things bursting back into life.  Its also a great name.  There are times when I think I should change my name to Persephone, I would be a different person if my name was Persephone.

It also makes me think of the painting by Dante Gabriel Rossetti – ‘Persephone/Prosperine’, which is one of his paintings of Jane Morris, wife of William Morris.  It is a superb painting.  She is shown holding a pomegranate as part of the story is about her eating six pomegranate seeds, which determined she would be underground for six months.  (moral of this tale – avoid men bearing pomegranates).  Actually, not only would I wish to be called Persephone, I would also like pre-raphaelite hair please, by which I mean long, wavy red/gold tresses.  Can that be arranged?

and finally – from the master of quotations himself – “Quotation is a serviceable substitute for wit” (Oscar Wilde) ‘nuff’ said.